11 Itineraries with overnight stay in shelter

and at least one Via Ferrata

For trekking lovers, what could be more satisfying than combining (at least) a ferrata with a shelter night? We have collected a series of itineraries that go very well with being crossed, breaking the trip in two days with a night, staying at high altitude. This collection is not exhaustive. Our peninsula gives us innumerable itineraries and the imagination and ambition to climb can guide us in many trips that we have not signed in this collection, for example the climb to Monte Cavallo with the Ferrata Norina, the climb to the Bafile shelter in the Gran Sasso or the Sorapiss ring with le Ferrate Berti and Vandelli just to name a few.

For this collection we have tried to combine a series of routes of good technical level suitable for experienced and well-trained hikers who feel at ease with a backpack loaded with material that is used to shelterk at least one night. 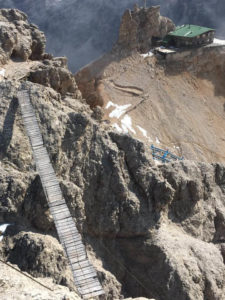 After closure of the Bindonvia that went up to Rifugio Lorenzi along the Val Stunies, following the Dibona Aided path or the Ferrata Bianchi al Cristallo has become a much longer and more tiring trip than he had used to do. The Val Stunies is to be walked uphill (or possibly downhill) along a tough scree that drains lots of energy. An interesting alternative is to leave the car at Passo delle Tre Croci early in the morning, climb towards the Son Forca Rifugio and go along the Val Padeon along the easy path that without excessive slope leads us to take the Dibona Aided Path uphill. We cover the long historical route through the trenches, alternating stretches of normal trail with aided stretches, reaching after a long day (about 22 km and 10 hours of itinerary) the winter lodge of Rifugio Lorenzi (hut currently closed). Here you can stay overnight. The following morning the Ferrata Bianchi goes up to the Cristallo with a pleasant itinerary, without filling the uphill gap to start the via ferrata. The aided way extends on the ridge and does not present excessive technical difficulties. We reach the summit of the Cristallo and then take the descent that partly follows the Ferrata Bianchi. The return is along the Val Stunies scree until it reaches the Rifugio Son Forca then the Tre Croci Pass.

Remarkable trip in the Pale di San Martino. Whether you use the lifts or walk up, you must reach the station of the Col Verde cable car from San Martino di Castrozza. Go up a steep approach and climb the beautiful Ferrata Bolver Lugli that leads us to the Shelter of the Fiamme Gialle under Cima Vezzana. 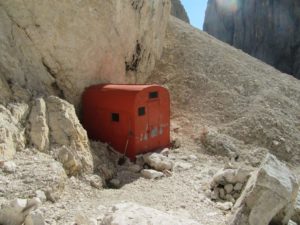 At this point we will have two alternatives: stay overnight at the Fiamme Gialle Shelter or climb to Cima Vezzana and then descend the short Ferrata Gabitta d'Ignoti on the Val Strut side and stay overnight in the Spartan Brunner shelter.

In both cases you will travel along the long snowfield of Val Strutt and then walk along the The Farangole Trail in the direction of Rifugio Pedrotti then of the top station of the cable car with which we will return to San Martino di Castrozza.

Ferrata del Lago at the Sonningpass 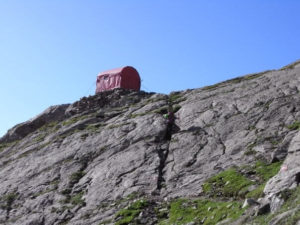 The Ferrata del Lago is a recent ferrata built to reach the Passo del Bottarello (or Sonningpass) which is the state border between Italy and Switzerland close to Pizzo d'Andolla in the upper Val d'Ossola. The trip is long and sometimes wild, immersed in a very interesting and little beaten environment. The long approach can be broken by sleeping at Rifugio Andolla or staying overnight at Varese Shelter located a few hundred meters from the start of the via ferrata. The via ferrata is recent and in excellent condition. At its end we can follow the ridges that lead to Pizzo Andolla or Bottarello with mountain routes. The return takes place in reverse for the outward itinerary. 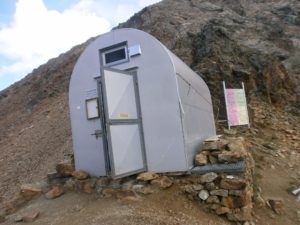 In our humble opinion one of the most beautiful trips with via ferrata in the whole of the Alps, in particular if traveled in good weather. The panorama from Monte Emilius it is magnificent and ranges over the various 4000s that surround the Val d'Aosta. However, the route is long and the Emilius via ferrata is not to be underestimated. Going through it during the day is a difficult task. We recommend staying in one of the huts or al Federigo shelter (ca 2900 m). The shelter is at high altitude and you have to equip yourself accordingly. Go along the ferrata on the ridge the next morning and then take the long return that takes us back to the cable car then to Aosta. 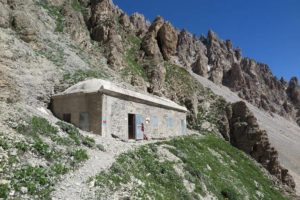 Historic itinerary in the Maritime Alps ascending to Cima Dronero near the Oronaye in the Cuneo area. Long itinerary for total approach and height difference. We meet three shelters along the route: the Enrico Mario shelter, The Eagle's Nest then a additional emergency shelter. The last two are to be considered as emergency posts. The Enrico Mario Shelter is currently not in perfect condition due to humidity and its use is not recommended. However, not far away is the Shelter Valmaggia of the CAI section Dronero which is quite recent. Both these solutions will allow us to leave early in the morning and finish the aided sections (both uphill and downhill) already in the late morning. 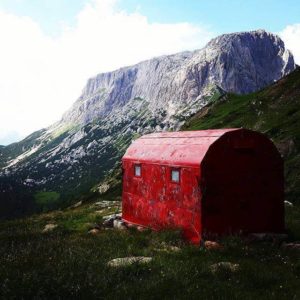 On the Italian-Austrian border in the Carnic Alps we meet the recent and challenging Torre Clampil Ferrata near the Passo di Pramollo. An interesting and challenging itinerary could consist of the ascent of the Ferrata to the Clampil Tower including the ascent to the nearby Winkel Tower. Passing through Austrian territory by an easy path that leads us back to the Italian territory on Lomasti Shelter located on the western side of Monte Cavallo. The following day we return to the Passo di Pramollo with the easy Via Ferrata Contin.

Via Ferrata Fiamme Gialle Ferrata to the Reali Shelter 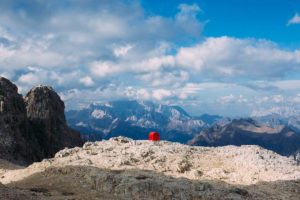 Challenging itinerary in the Pale di San Martino. If you stay at Reali Shelter, placed shortly after the end of the via ferrata, you will have the necessary time the next day to go up to Croda Granda via the normal route. The via ferrata is of medium difficulty with some difficult passages. However, the itinerary presents the greatest difficulties in the descent that occurs for the Alpinistic Trail of the Highlands or for La Scaletta also not trivial. A very long and pleasant itinerary that winds through one of the most beautiful parts of the Pale di San Martino.

Stella Alpina via ferrata at Agner 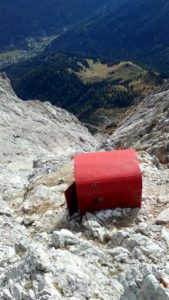 On the Veneto side of the Pale di San Martino group we can take the magnificent trip to theAgner along the Stella Alpina Ferrata. The itinerary is long and has a decidedly Alpine character. After a nice approach you have to take a difficult uphill ferrata and at the end we will have a demanding stretch of very exposed path (Lastoi) which requires a firm step. We then reach the Biasin Shelter place a Pizzon saddle. We suggest to stay overnight at this shelter and to climb to the summit of the Agner (exposed stretches) the following day where we will also face a delicate descent on a gully with a slippery surface. A grandiose and very satisfying itinerary.

Aided path of the Palete, Via Ferrata of the Val Gelada and Aided path Vidi 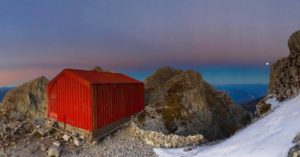 In the northern corner of the Brenta Group far from the tourists who flock to its southernmost routes we can combine a beautiful and challenging itinerary that starts from Passo del Grostè and runs through three aided routes. We initially walk the exposure Aided path of the Palete until you reach the Val Gelada di Tuenno. We ascend it in an austere and slightly beaten environment until we reach the vertical stretches of the Ferrada of the Gelada Valley. Traveled this way we will move on the western side reaching a saddle. We will keep the right to travel northward along a section of the Costanzi Alpine Trail. This stretch is exposed but not difficult and we reach the Fratelli Bonvecchio Shelter. The following day we walk back the last stretch traveled the previous day and proceed towards the Passo del Grostè reaching the Aided path Vidi which will lead us back to the Passo del Grostè from which we can take the cable car. 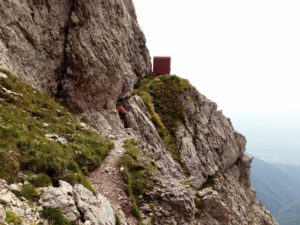 The Schiara is the main mountain of the Dolomiti Bellunesi and is traveled in a circular direction by a triptych of very beautiful and pleasant via ferratas. Reached the Rifugio VII Alpini at the base of the Schiara we begin the ascent of the Ferrata Zacchi that will lead us to the Bernardina shelter just below the Gusela del Vescovà. You can stay overnight in this shelter and then end the trip the following day. We will climb to the top of the Schiara along the Ferrata Berti and we will go down on the opposite side with the Piero Rosso Ferrata (Marmol). There is also a shelter near the Forcella Marmol. 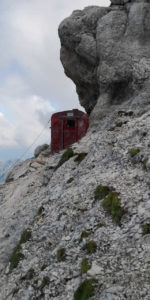 This last proposed route is from break in 3 days with 2 nights. In Julian Alps a magnificent but very demanding itinerary unwinds: la Via Ferrata Amalia at Jof Montasio. Some compare it to Costantini on the Moiazza in terms of length, commitment and environment. The long itinerary leads us to the top of the Jof Montasio and goes around the southern slopes along two wonderful aided paths. We propose to break the itinerary into 2 overnight stays. Spend the first night at Suringar Shelter (ca 2500 m - ca 5h 30 'from the parking lot) and then climb up the Gully Findenegg and reach the Jof Montasio in just under two hours the following day. 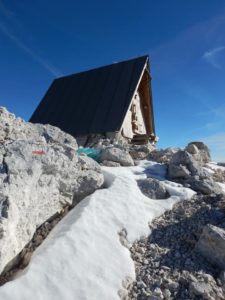 Descend on the southern slope to take the Pipan ladder and then in an easterly direction the Leva Aided path until it reaches the Cima di Terrarossa. We always continue in an easterly direction beginning the Ceria Merlone Aided path reaching the Vuerich shelter (2530 m - ca 5/6 h from the Suringar Shelter). The following day ends the Aided path Ceria Merlone and da Saddle Lavinai of the Bear go down to the parking lot.

For more information on huts and shelters, we suggest you visit the site Huts-Shelters.