13 Ferrates ideal to go in March

March is a magnificent month to go along via ferrata and aided paths. Although at high altitude it is still full winter and the snow will make it impossible to travel the aided routes, the via ferratas at an altitude lower than 1000 m are generally clear of snow and the temperature is ideal for climbing them. We have collected 13 itineraries that give great satisfaction in March.

In the Reggio Apennines there is a singular mountain also mentioned by Dante in the Divine Comedy: the Pietra di Bismantova. For three quarters it is characterized by vertical rocky ramparts that attract many climbing enthusiasts. On the eastern side of the "Pietra" the historical Ferrata degli Alpini with the Pietra di Bismantova was installed in the 70s. The route is on the whole of medium difficulty with a couple of challenging downhill passages in the first section and a corner airy in the terminal part of the route. The way extends in the sun in the morning and the temperature will generally be perfect in mid-seasons. For fans it is also possible to follow the recent and easier West Ferrata in the western side of the mountain. 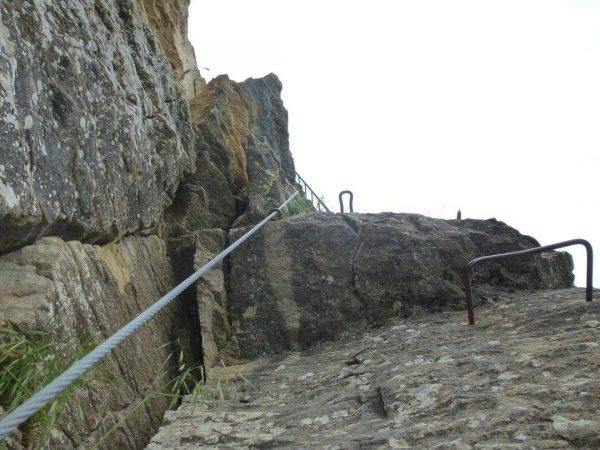 The magnificent via ferrata of the Medale goes up the mountain that stands out vertically above Lecco. The ferrata is aided with cable and chain and offers excellent rock for climbing. The first half of the route will be difficult while the second section is of moderate difficulty. Magnificent view on the Lake of Como constantly behind our back during the climb. Many options for returning and combining other routes at the end of the route: go up to Coltiglione col Aided path GER, get off at Rancio with the Aided path of Medale or reach the nearby Monte San Martino and then descend from the Aided path Silvia or from the Wire rod. For our reflection on the via ferratas with chains, here our article. Aggiornamento: attualmente chiusa in stato di manutenzione, suggeriamo di valutare le vie di simili difficoltà vicino a Lecco, ad esempio la Ferrata al Corno Rat, to the Corno di Canzo or the Ferrata del Monte Due Mani. 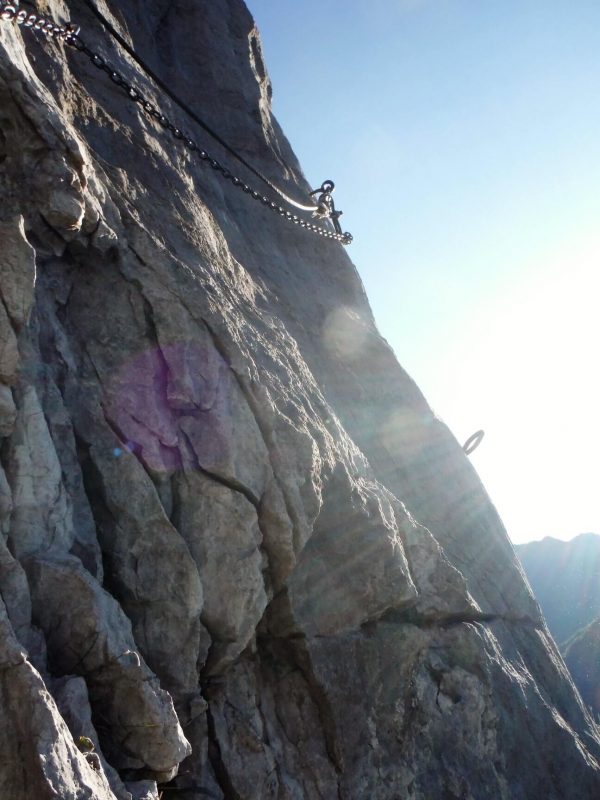 The historic via ferrata ascending to Monte Boccaor is a beautiful road that extends in the Monte Grappa massif in the Vicentine Pre-Alps. The route is very climbing with moderate difficulties and mainly concentrated in the first part of the route. Of note the steep approach to get to the route as well as the possibility for the more experienced to combine this route with the neighbor Ferrata Guzzella downhill. 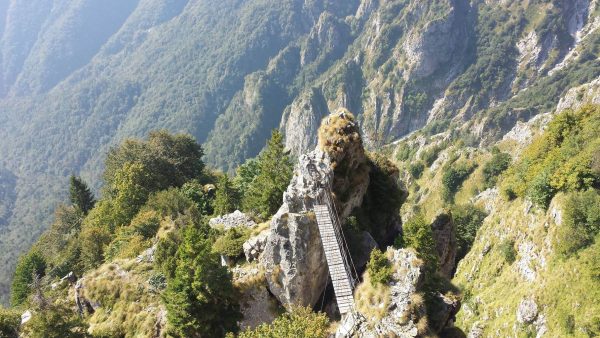 Along the road that connects Pinerolo to Sestriere in the province of Turin we meet the difficult and exposed Ferrata Ciardelli. The route initially climbs up some stretches supported and then ends with an impressive over 100 meter wall to be climbed vertically with the aid of brackets. A beautiful suspension bridge is also installed. 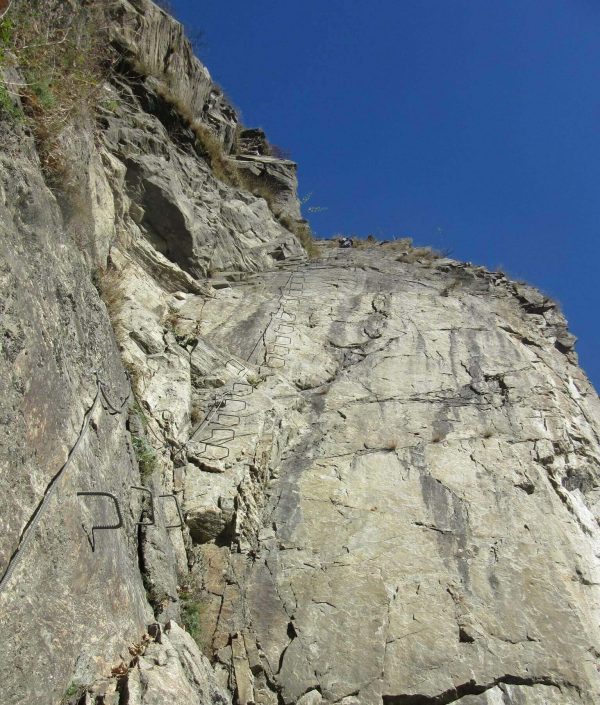 In the lower Appenino Ligure above the village of Crocefieschi in the province of Genoa a beautiful and varied via ferrata was installed dedicated to the Genoese mountaineer Deanna Orlandini who died in a winter ascension in the Apuan Alps. The route extends along the walls of the Reopasso. This mountain is composed of agglomeration and offers the opportunity to be pleasantly climbing. Exciting the beginning in the cave and the final wall with a decisive overhang. Another treat of the tour is the mid-rail shelter. 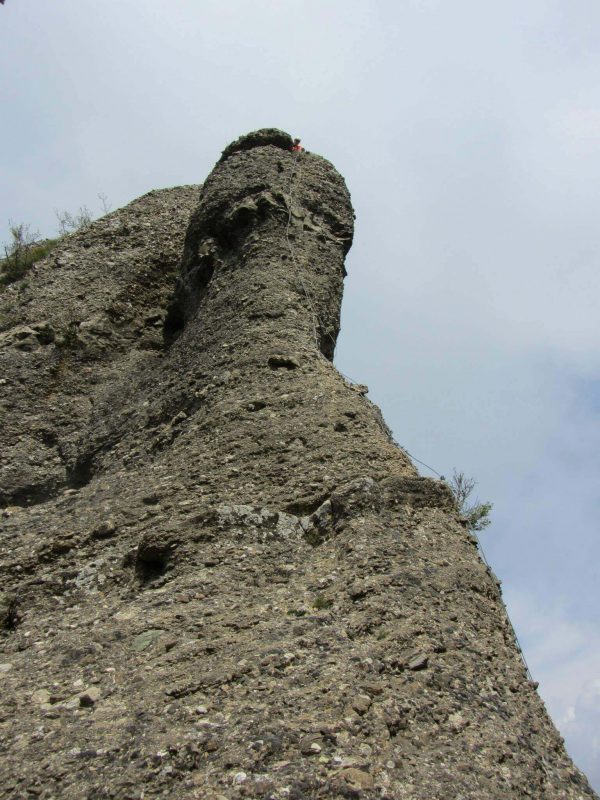 This recent via ferrata is the only one in the Marche region and, although not long, it is beautiful and challenging with a couple of steps where you need a fair amount of strength. Located in the province of Macerata, the via ferrata is at low altitude and ideal for walking in the spring months. 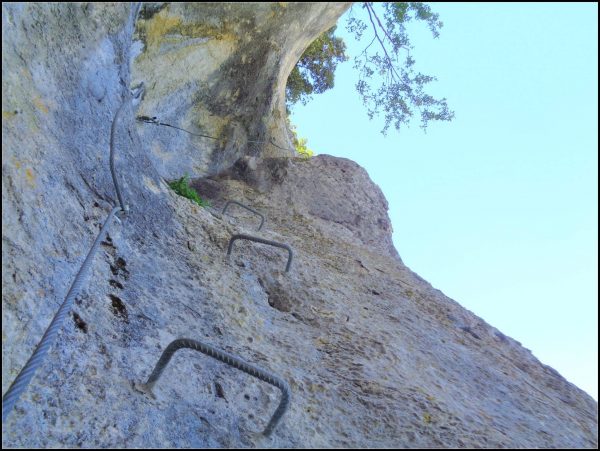 On the walls that overlook Varallo in Val Sesia in the province of Vercelli the Falconera Ferrata has been installed. The route is athletic and difficult with at least 3 passages in clear overhang that require good strength and preparation. The route is very vertical and exposed with difficulties that gradually fall in the second part of the route. After the overhangs there is also a suspension bridge. At the end of the route it is possible to take the neighbor Via Ferrata Partusac before returning to Varallo. 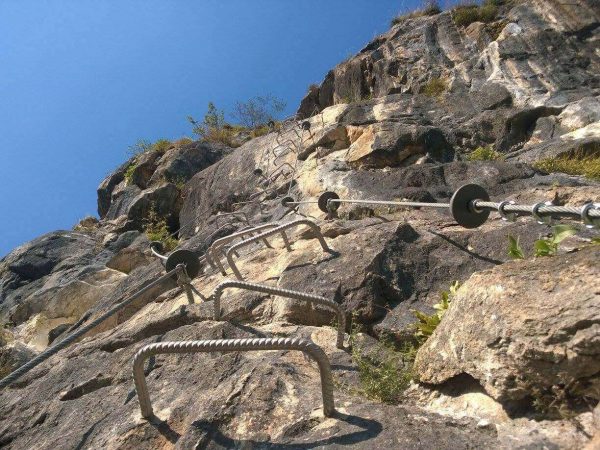 The short ferrata of Balma is located in the province of Biella and goes up the vertical walls of a former quarry. The via ferrata is rather easy although exposed. The route goes up with the abundant help of brackets and is ideal in a time cut to take advantage of the almost zero approach and the rapid return. 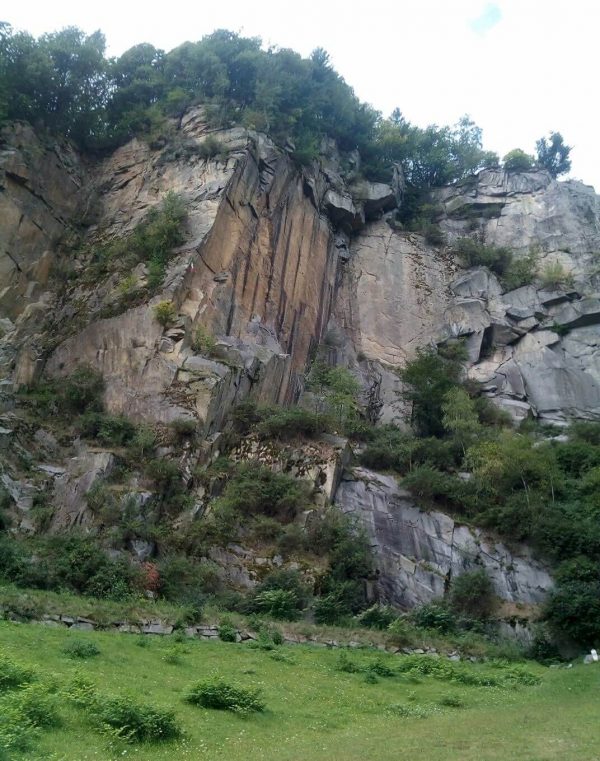 Located in Val Varaita in the province of Cuneo, the Ferrata di Chiaronto is a fun via ferrata that on the whole is of medium difficulty. However, it is necessary to indicate that a stretch of the route is challenging and steep. There are some suspension bridges and a curious network to be climbed. 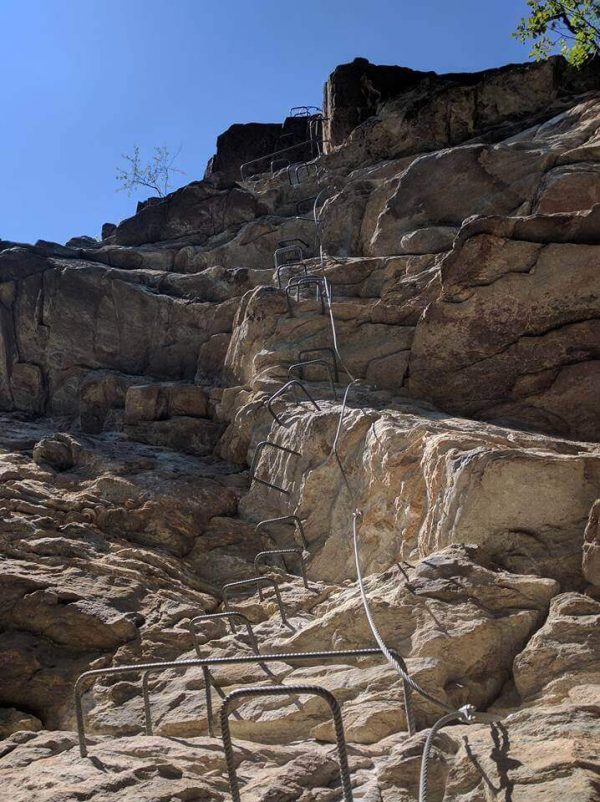 Along the Adige Valley, near Mezzocorona (Trento) the Ferrata di Favogna is installed. The aided way is beautiful with a challenging first pass at the start of the route (chimney) which will give great satisfaction even to the expert hiker. Return of a couple of hours. 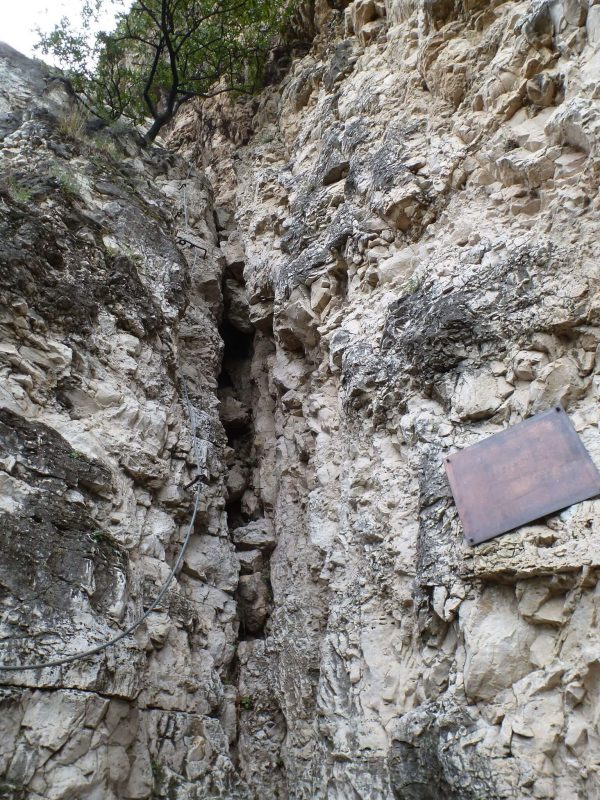 inland Sardinian the beautiful and demanding Ferrata of Badde Pentumas was built. The road extends on the rocky bastions of an impressive canyon. The main difficulties of the route are concentrated in the second part of the route with a vertical wall poor in grips that will require decision and strength to be passed. Given the low altitude, ideal in mid-seasons. 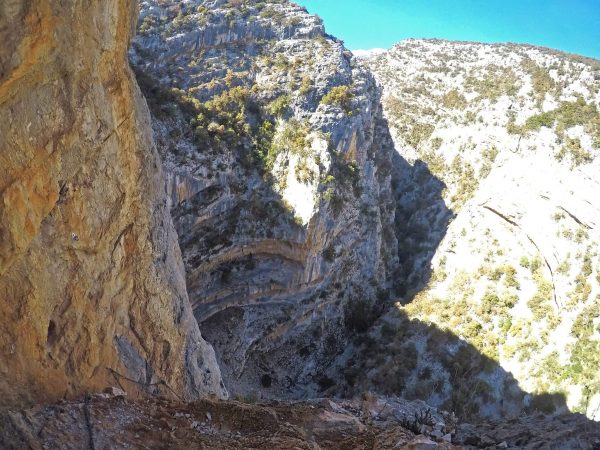 The Ferrata Rino Pisetta in Val di Sarche is one of the most difficult via ferratas in Italy. The route is athletic and, especially in the first half of the route, presents limited opportunities for climbing. It goes up a rocky bastion that will offer plenty of exposure and vertical slabs. Not to be underestimated in particular the first 20 meters and the half-way crack that require strength and resistance. Ideal on sunny days due to the low altitude. 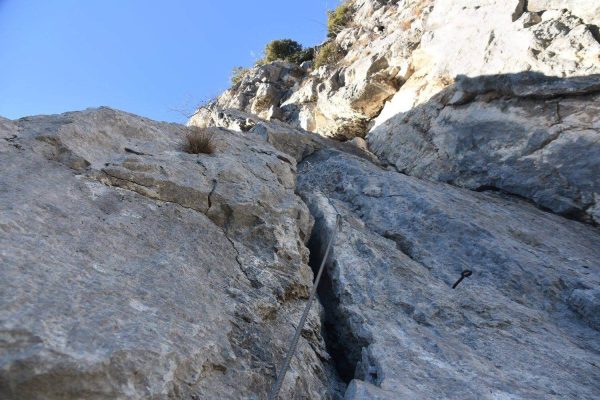 In the Brescia Pre-Alps near the Lake of Iseo you can walk along a pleasant aided path that, without looking for technical difficulties, goes up to Punta Almana. The route is pleasant and suitable for everyone, paying attention only to the bottom after recent rains. 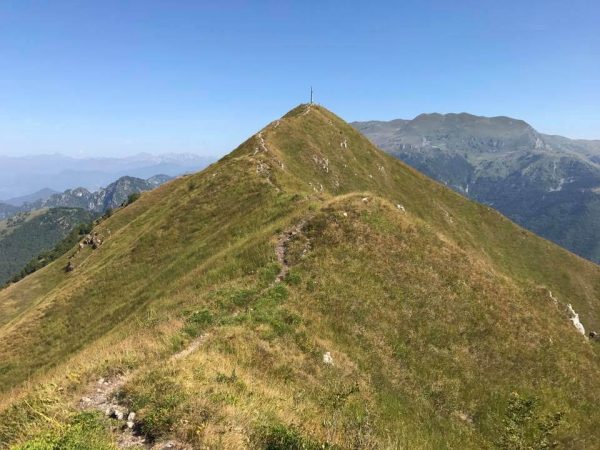