16 Ferratas ideal to go through in April

Ideal in the spring

With the days getting longer and the temperature getting milder, April is one of the best months to walk the via ferratas below 2000 m where, with rare exceptions (for example in gullies on the northern slopes), you don't meet any more snow . Temperatures are unlikely to be a problem while spring storms will have the unknown factor to keep under control. Here is our collection of ideal itineraries to follow in the month of April

The Ferrata di Ballino or the Cascata del Rio Ruzza is an easy via ferrata, short and ideal as a first via ferrata even with boys. Although you will have to take the same route downhill, the climb is without substantial difficulties and is very rich in artificial holds that reduce difficulties to a minimum. The environment is very nice, making it a good option for half a day in nature with no pretense of difficulty. 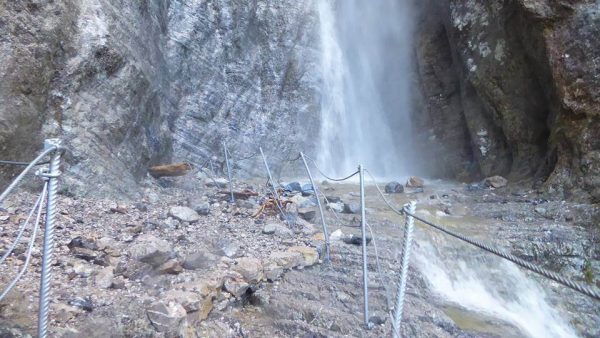 In the upper Apennines of the province of Reggio Emilia a very nice via ferrata has been opened which, starting from the bed of the Dolo torrent, goes up a rock blade of about 200 meters. The route is varied and challenging with at least a couple of difficult passages. The rock is sandstone, compact with good adherence. A break in a split on a dihedral is the key passage that requires good technique to be traced. Ideal to combine with the neighbor Ferrata del Monte Penna. 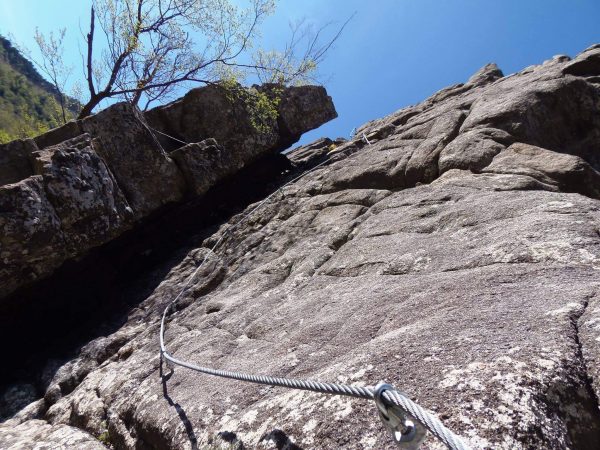 In Valchiavenna in the province of Sondrio the Ferrata Biasini was built. This via ferrata is of medium technical difficulty and, thanks to the abundant use of brackets, it reduces the difficulties that the smooth slabs on which it extends would offer. The way is aerial and exposed. Attention to the steep and slippery path of return (useful hiking sticks). Always in Valchiavenna you could walk along the Ferrata Succetti. 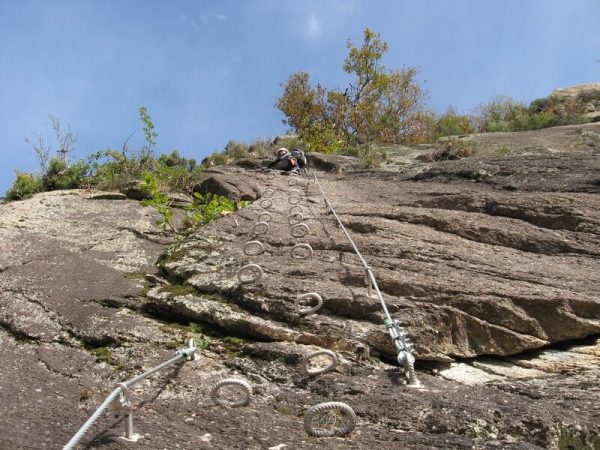 The historic Ferrata Campalani climbs the eastern slope of Carega into Small Dolomites along the border between the provinces of Vicenza, Verona e Trento. The via ferrata was restructured in 2018. The route is very logical and has the key passage in the start. The road then continues going up a wall diagonally to then go into a small gully and then go back up an exposed wall until you reach the ridge that leads to the summit of Carega. Very nice view from the summit. Can be combined with other routes in the area. The exit of the via ferrata can generally present some major pitfalls if with frozen ground based on the snow fallen in winter. It may be a good idea to have rattles and sticks with you for more stability. 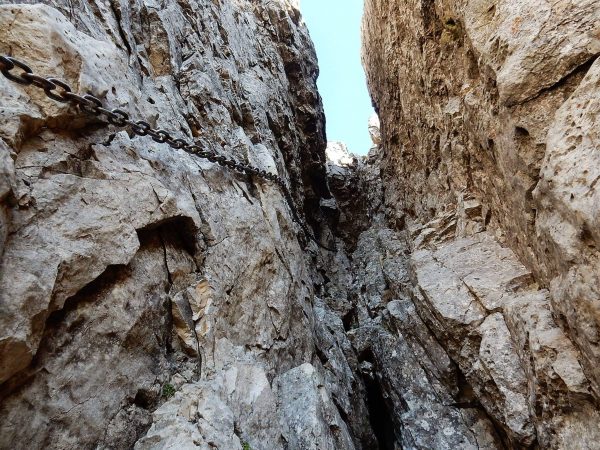 Departing from Pietramurata in the province of Trento, you can go up to the Monte Casale climbing an impressive rock wall. This wall was aided with the Ferrata Che Guevara. This via ferrata is very beautiful, climbing and does not present significant technical difficulties. However it is long and the overall height difference of the trip is considerable. Attention in the spring months to possible discharges of stones due to the melting of the snow. The return can also take place along the easy but slippery Ferrata del Rampin. Note for 2019: check with the CAI of Pietramurata the viability of the route due to a temporary closure of the route. 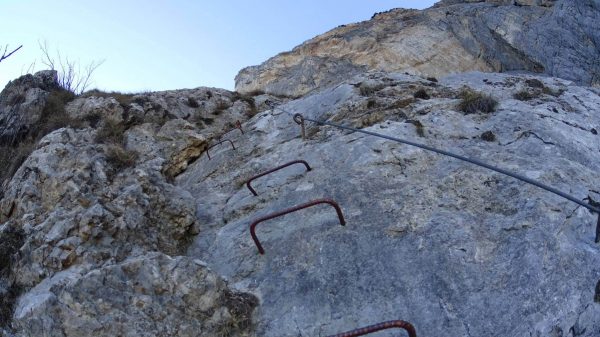 Near Zone in the province of Brescia a new via ferrata has been installed that goes up a spur of rock, the Corna delle Capre. This route offers excellent limestone, exposure and a beautiful ascent line. Some stretches are difficult and overall the climb, albeit short, puts it to the test. With a path of about an hour it is possible to combine this climb with the neighboring one Via Ferrata Corno del Bene which at the beginning of 2019 is closed due to a landslide which affected the part near the start. 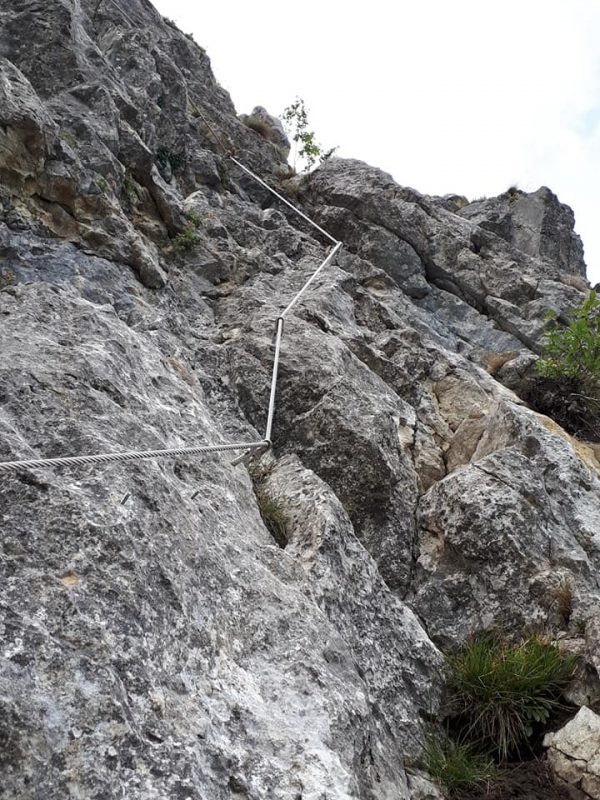 Via Ferrata of the Artists

Not far from Finale Ligure in the province of Savona, the beautiful and panoramic Ferrata degli Artisti is viable. The route presents medium technical difficulties with the suspension bridge and a subsequent traverse as the points of greatest commitment of the route. The return is long and steep. 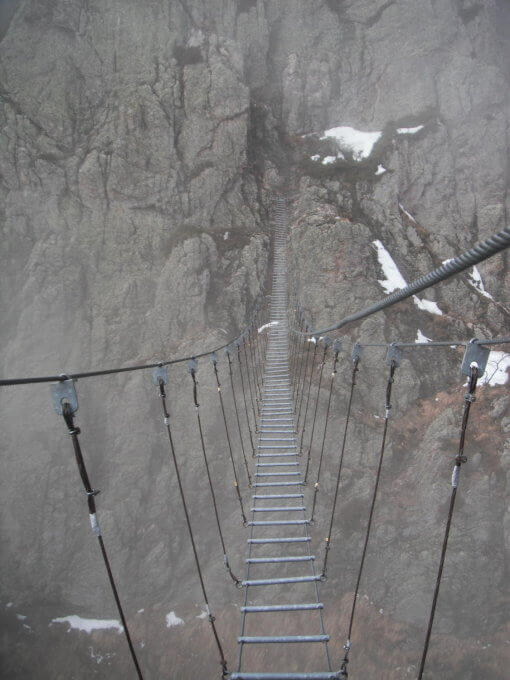 A few minutes drive from the center of Lecco you can reach the parking lot of the cable car ascending to Piani d'Erna. From this point you can climb the long Ferrata of the Gamma 1. The route is characterized by many stairs, high exposure and a couple of technical passageways towards the middle of the route. Ideal in early spring to avoid the heat of the summer months. Wonderful view of the neighbor Lake of Como. Possible to lengthen the itinerary by climbing with the Ferrata of the Centenary to the Resegone or the Buco della Carlotta to the Pian Serrada. 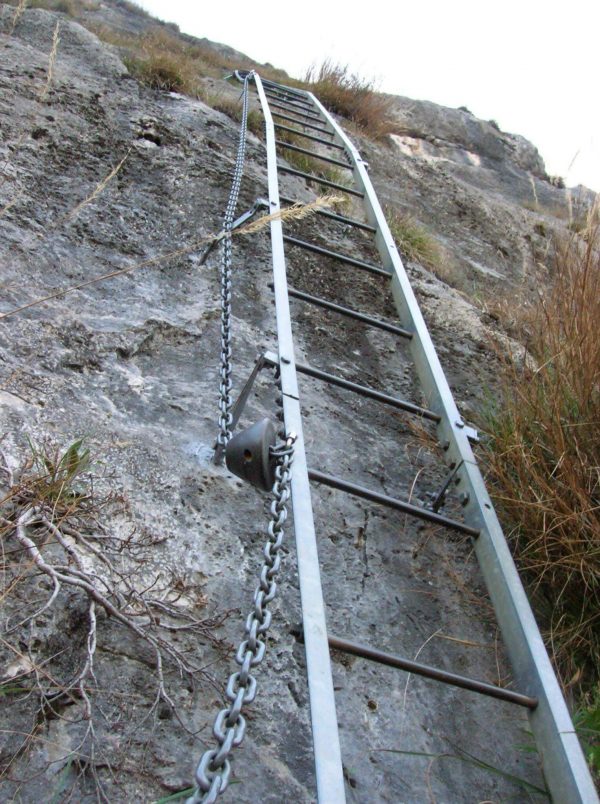 Via Ferrata of Monte Ocone

Reachable from Val Imagna in the province of Bergamo, the difficult Ferrata of Monte Ocone climbs to a long series of challenging rocky towers where there will be cliffs and athletic features. The route is very beautiful and climbing. To complete the 11 towers you will have to count between 2 hours and 30 minutes and 3 hours. From the top you will see the nearby Resegone and Lake Como. 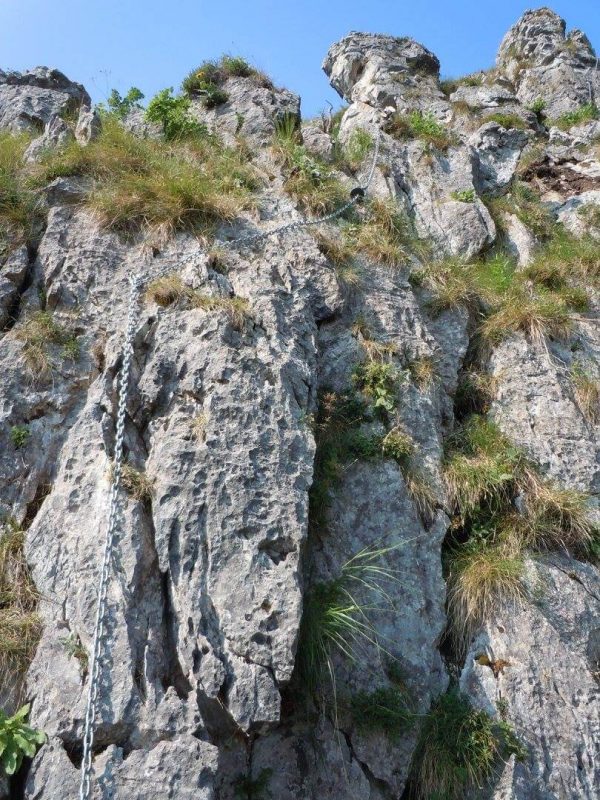 Via Ferrata Malfatti at Monte Sumbra

The so-called Apuan Alps they are special mountains, rugged with an alpine character compared to the nearby Apennines. Monte Sumbra has in its north face one of the most interesting mountaineering sites in the Apuan Alps. On the south-west side, instead, the easy Ferrata Malfatti rises. Very nice and quite challenging for the steep sections of path both during the approach and during the return. 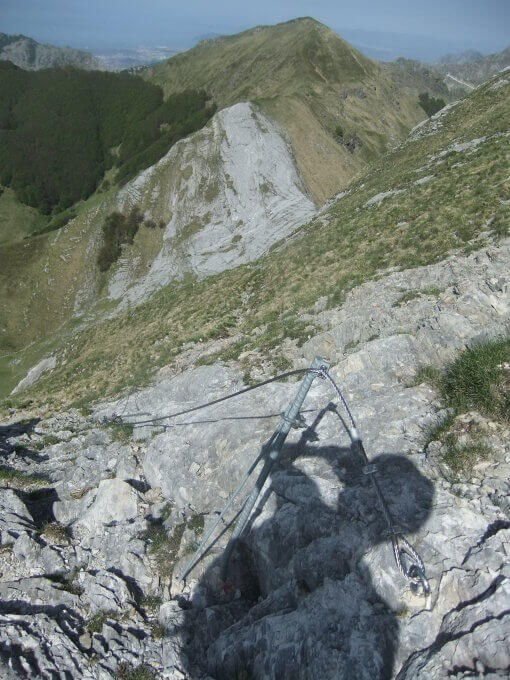 Via Ferrata at Corni di Canzo

The Ferrata del Vencinquennale at Corno di Canzo Occidentale is a very beautiful, technical and demanding via ferrata that rises to the highest of the horns located in the Lariano Triangle created by the two arms of the Lake of Como. The route is very logical and extends on an excellent limestone rock. With patience and technique you will be able to climb the road in satisfying climbing. Near this route there are other via ferratas that are always passable in this period: Corno Rat, Belasa canalone, Sass Tavarac and Aided path of Moregallo. 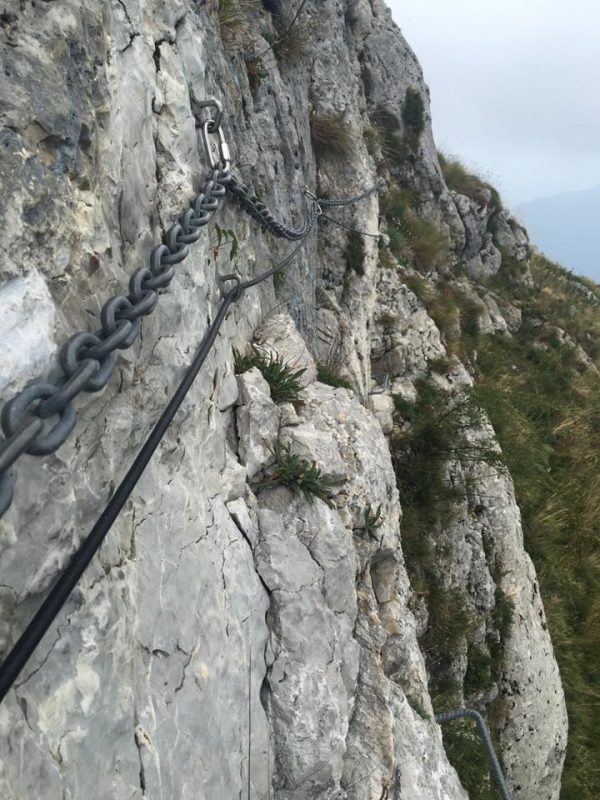 In Val Varaita in the province of Cuneo we meet the Camoglieres Ferrata. The itinerary is of medium difficulty with the exception of the key passage which consists of an overhanging aided wall. The route also offers suspension bridges and exposed but not difficult passages. Not far from this via ferrata there is also the Via Ferrata Chiaronto, also passable this season. 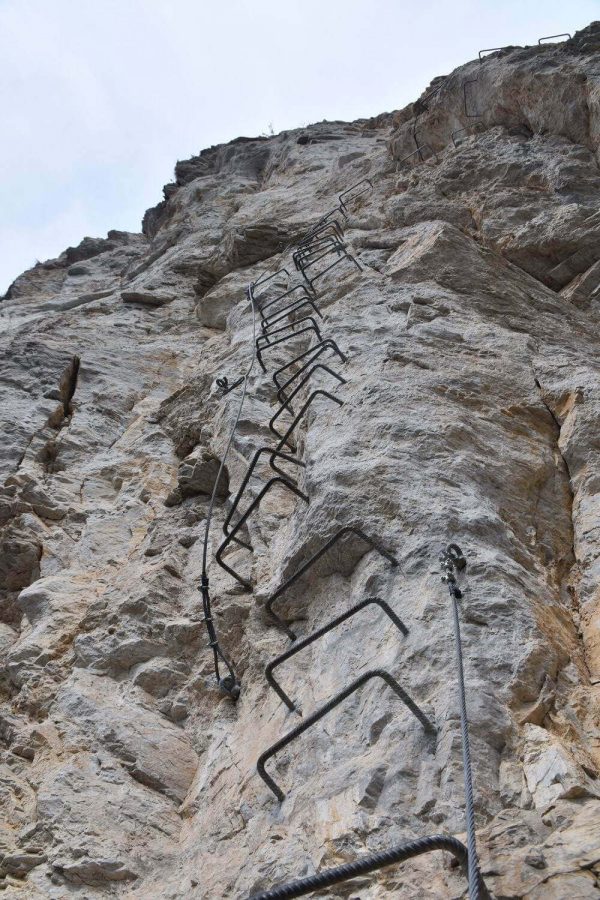 Ferrata of the Rocca dei Corvi

Between Cuneo ferrata, the Ferrata della Rocca dei Corvi is one of the most beautiful and interesting from a landscape and technical point of view. The via ferrata rises from the bed of a stream and requires good strength and athletic preparation. You will then have to disarm a stretch of road before returning to an adrenaline-pumping suspension bridge. 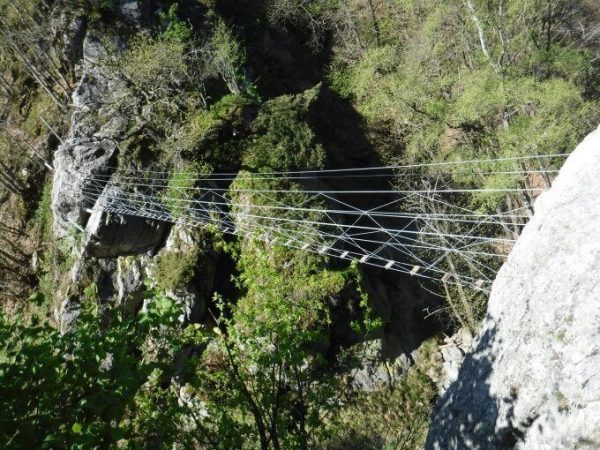 The Angster Ferrata is among the Ferrate of the Valle d'Aosta one of those that can be done already in spring. The route is of moderate difficulty although vertical and exposed. Among the other via ferratas in the area that can be followed at the beginning of the season we point out the easy Via Ferrata Covarey. 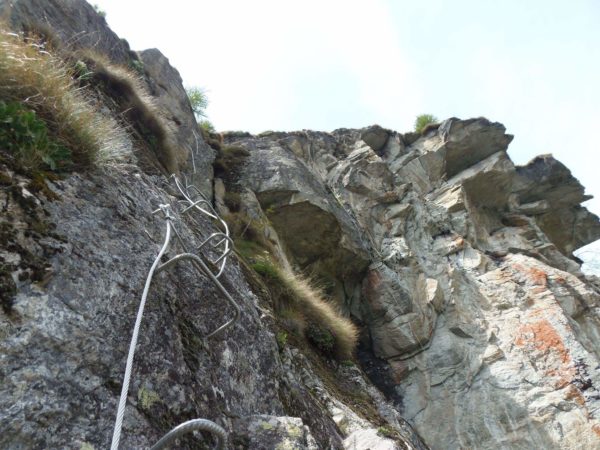 The Pont Cavanese Ferrata with its difficult variant is probably the most challenging Ferrata in the province of Turin. The route is very well aided and makes abundant use of brackets and exchanges, however the athletic passages are many and you will have to work hard and get your arms worked to finish it without problems. One may be useful longe with which to simulate a stop. Another route generally accessible at the beginning of the season in the province of Turin is the Via Ferrata Rocca Candelera. 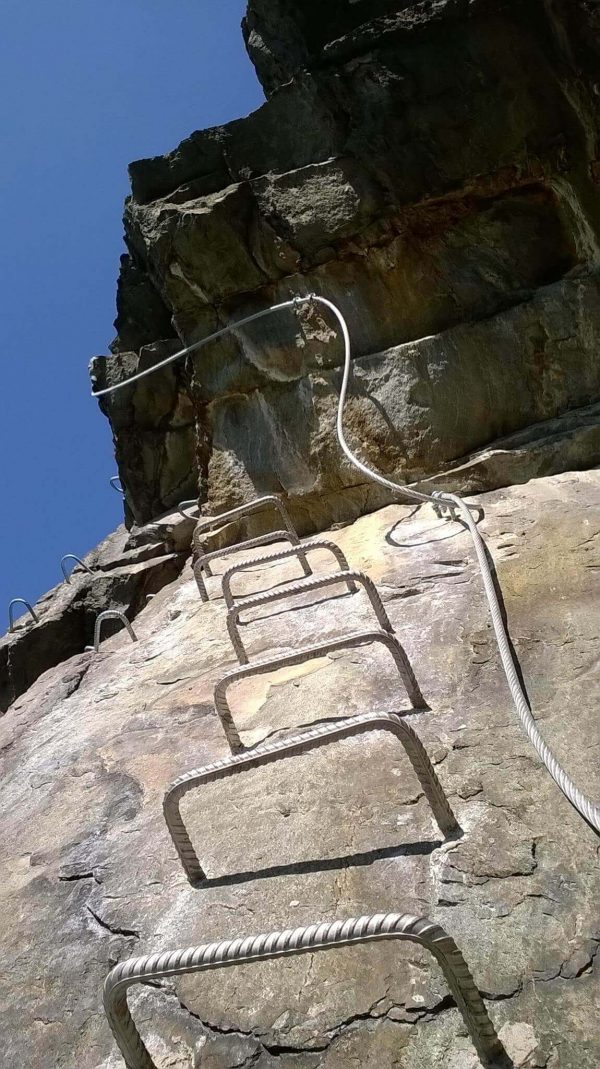 Via Ferrata Belvedere and Arenazzo

The Basilicata it is the southern region with the greatest number of via ferratas which are generally passable all year round. At the beginning of spring the climate is excellent for walking the beautiful Belvedere and Arenazzo routes with two suspension bridges, one of which is definitely a dancer and adrenaline. It is a good idea to check with the tourist office of the area, the actual opening of the via ferratas which, in certain periods, are closed due to the fauna that reproduces in the areas affected by the route. 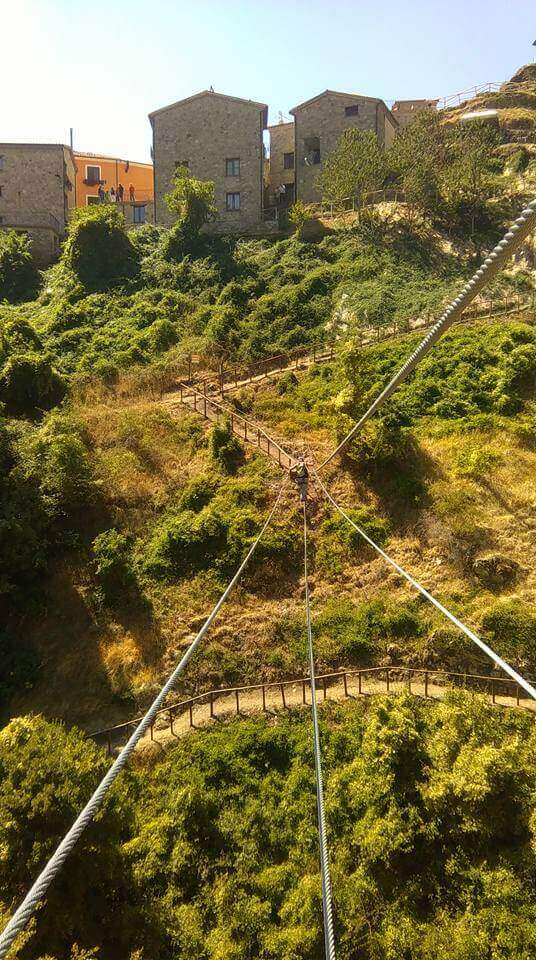