17 Ferratas ideal to go in May

With the spring and the rising temperatures, the chances of going via ferratas increase and we are now close to the season where we can go to altitude. We have collected 17 routes of aided routes that are perfect for the month of May. They are generally free from snow and not too hot, a good workout in view of the longer and more demanding hikes that await us in the summer months. The list is not exhaustive but just a hint :)

Ferrate in the North West

In the Northwest Alps, given the fairly high altitude and the general snowfall, you will have to tend to still be quite low in altitude. Except for mild winters, it will not be possible to reach 2000 meters without running into snow-covered areas, perhaps on the return paths or icy stretches. However, this does not exclude a good number of itineraries. Here are some.

Between Vie Ferrate of the Valle d'Aosta, the Ferrata Josè Angster is one of those accessible already in May. It does not reach 1800 meters of altitude and therefore it is cleared from snow already at this time of the year. The route is of medium difficulty and of medium length (ca 1h 30 ') with vertical and slab passages but never difficult. Also ideal for accompanying children and people who want to try a via ferrata: in fact, alongside the Angster Ferrata, there is an easier way to call Via Ferrata of the Children that allows without technical difficulties to become familiar with the progression. 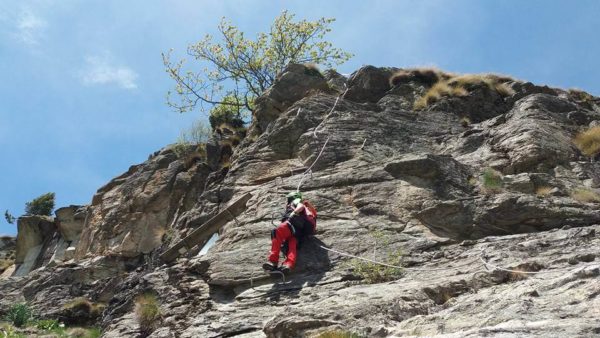 On the slopes of Monte Tovo above Oropa you can climb the beautiful and varied Ferrata Nito Staich. This route is varied and, although not long or difficult, it is rewarding. Beautiful exposed stretches and some non-trivial passages will give satisfaction to those who salt them. At the end of the road it is possible to go up to Monte Tovo (if the road is clear of snow). To assess the conditions of the fund for the neighbors Ferrate Hi Miki to Monte Mars and Limbo, which tend to have snow-covered stretches until the end of May 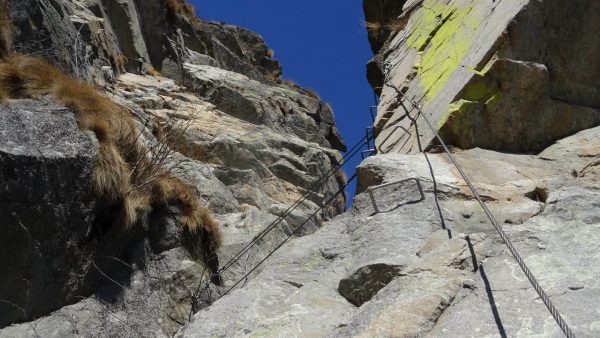 The Ferrata at the Madonnina del Coren is a via ferrata located in the Orobic Prealps in the province of Bergamo. The road is generally already accessible from April but May is a good month where the temperature will be optimal. Medium difficulty route and recently renovated. 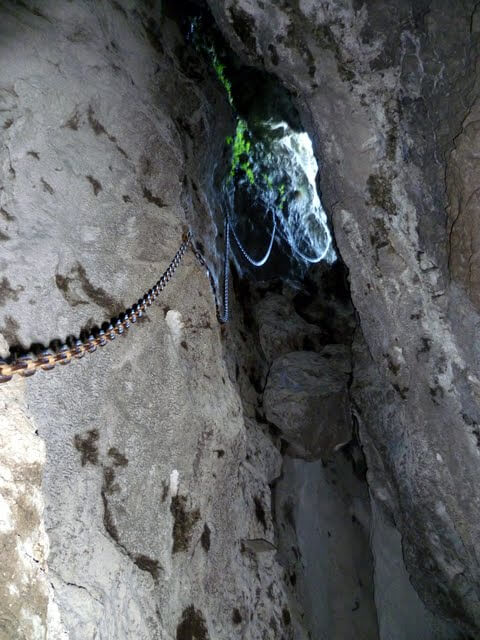 Via Ferrata of the Centenary CAO Como at the Grona

Among the various Vie Ferrate of Lake Como, the Ferrata Monte Grona is one of the few to develop on the Como side. This magnificent route is one of the most beautiful and climbable mountain roads that surround the lake. The road is exposed and technical with very beautiful passages and particularly climbing rock. Be careful not to underestimate the difficulties. 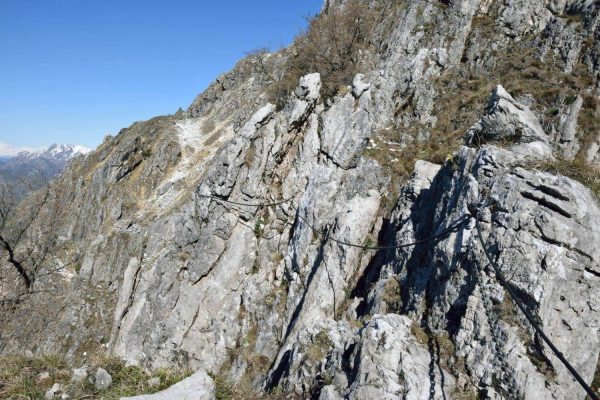 Via Ferrata dei Funs in Entracque

In the province of Cuneo you can take the beautiful Ferrata dei Funs. The route is vertical and some stretches are somewhat challenging. For experienced and well-trained hikers there is an athletic variant with clear overhanging sections. The variant is not long but strength is needed to continue. Beautiful view and the suspension bridge before the end of the route. Complete itinerary of about 4h and 30 '. 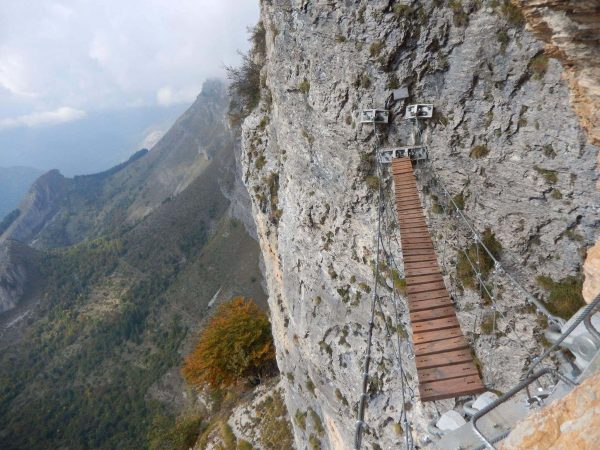 On the Lecco side of Lake Como, you can walk the Sileggio Zucco Aided path. This path is a cross between an aided path and a via ferrata presenting more vertical points although always well assisted by metal frames. Ideal in spring to avoid the summer heat. 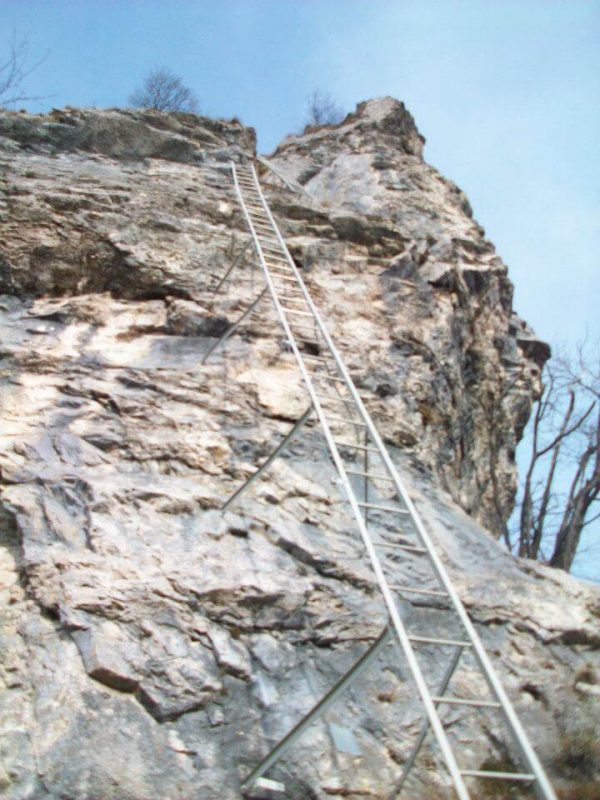 Via Ferrata to the Rocca Candelera

Near the town of Usseggio in the province of Turin you can take the exposed Ferrata di Rocca Candelera. The route climbs on vertical slabs and an exposed pillar. Abundant equipment facilitates the climb. Complete itinerary of about 4-5 h. 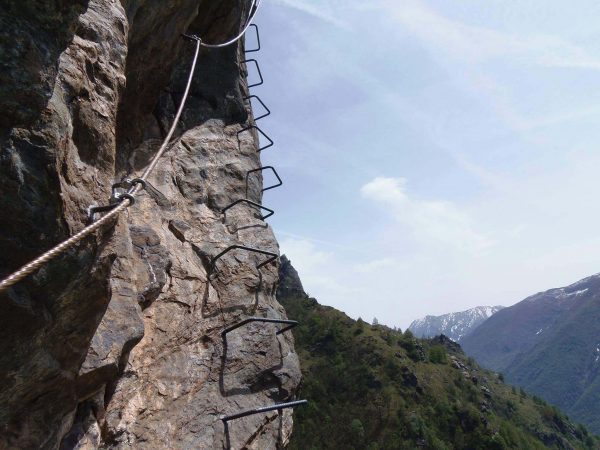 Ferrate in the North East

In the valleys of the North East you can already cover a good number of well-aided routes lapping the 2000 meters without excessive risks of running into large snow-covered stretches. Obviously the conditions must be considered after each winter.

Above Naturns (Bolzano), the difficult Ferrata Hoachwool extends. This route is athletic in many passages and, although not extreme, requires good strength and training. After a few meters from its beginning you will cross a long and exciting suspension bridge. Once at the start, you can continue uphill reaching the easy one Via Ferrata Knott, a network of multiple itineraries aided with options even for beginners and youngsters. 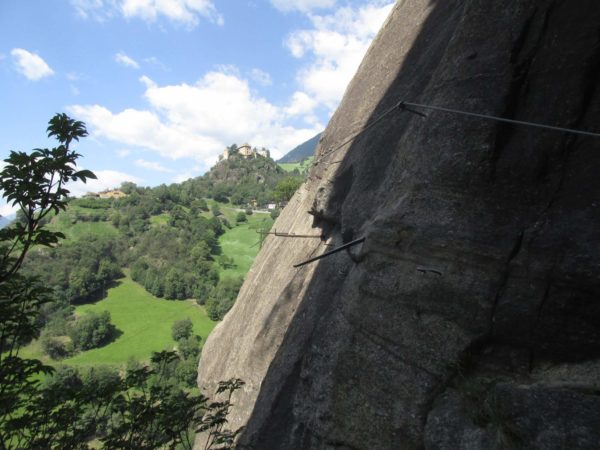 Departing from the Mendola Pass in the province of Trento, this via ferrata climbs to Monte Roen with passage to the Oltradige Rifugio. The route is easy and alternates rocks with stretches of supported slabs that the expert hiker will find very climbing. Return for the Aided path of the Chamois. 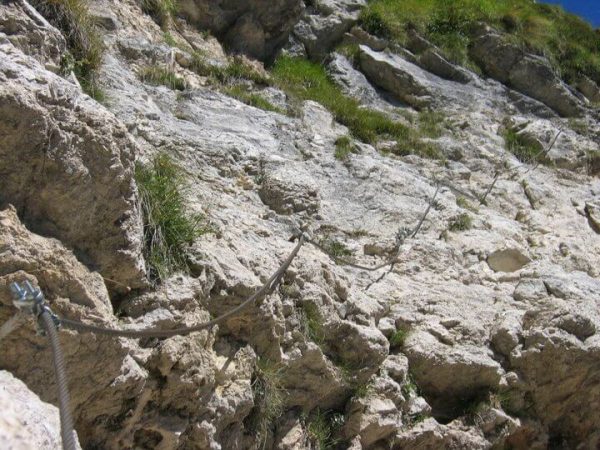 The Via Ferrata in Val di Fiemme which can first be traveled is generally the Ferrata Attilio Sieff in Punta Polsa above Ziano di Fiemme. The route is not difficult and has limited exposure. Go up and down the same route with climbing passages and a limited use of artificial brackets. Beautiful view from the summit over the nearby Lagorai and Latemar. 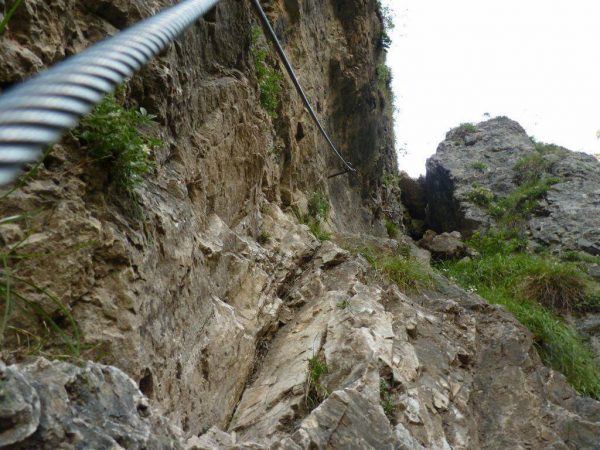 Among the Via Ferrata in the mountains surrounding the Conca Ampezzana, the Ferrata Sci Club 18 at Monte Faloria is the one that extends at a lower altitude and is the one that generally becomes viable before June. The via ferrata is difficult, exposed and with a mainly vertical development that requires training and good technique. Beautiful view upon arrival on the Cristallo, the Tofane, the Croda da Lago and the other mountains surrounding Cortina d'Ampezzo. 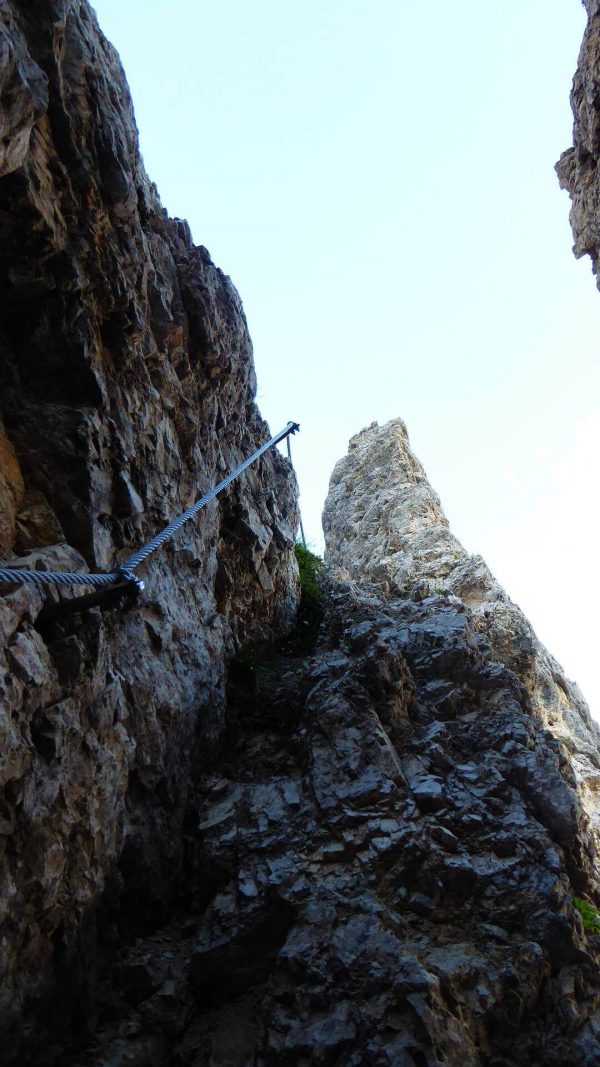 The Ferrata delle Aquile is an original via ferrata that surrounds the southern bastions of Paganella, a mountain that separates Andalo from the Val d'Adige. The route has a singular development and for the first half of the itinerary it is mainly downhill with sections that are also exposed but never difficult. The second part is composed of two adrenaline-fueled suspension bridges and a pleasantly climbing last pillar. This last part of the route can be avoided by climbing the extreme variant with two exposed helical staircases. New equipment and in excellent condition. 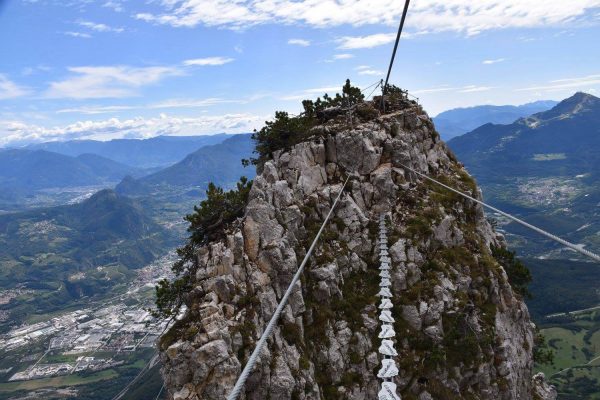 The Ferrata Segata is a difficult route and, although short, it is recommended for expert hikers with good climbing skills. The route is in fact composed of 3 short sections with technical sections on rather greasy rock. The route climbs to Dos d'Abramo with some passages many technicians, including a chimney and a slab to be approached with caution. The trip as a whole on the mountain that dominates the city of Trento is very beautiful. 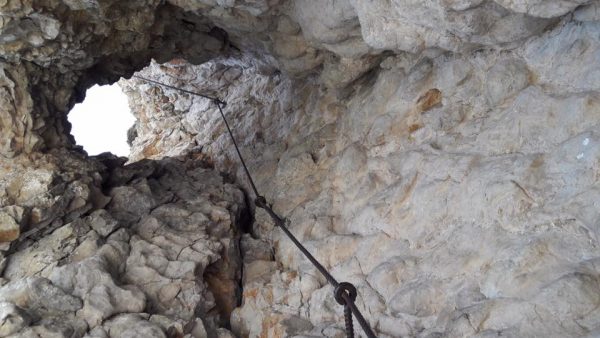 On the slopes of the Pasubio you can take an easy mountaineering route with aided and rather discontinuous stretches: the Falcipiedi Monteaineering Path or, as also known, the Path of the 5 Cime del Pasubio. The route runs parallel to the famous 52 tunnel road. The latter is an ingenious work built during the First World War and cuts the five peaks that climb with the aided path halfway up the hill. Long way (about 7h 30 'total) but very satisfying from a landscape and historical point of view. 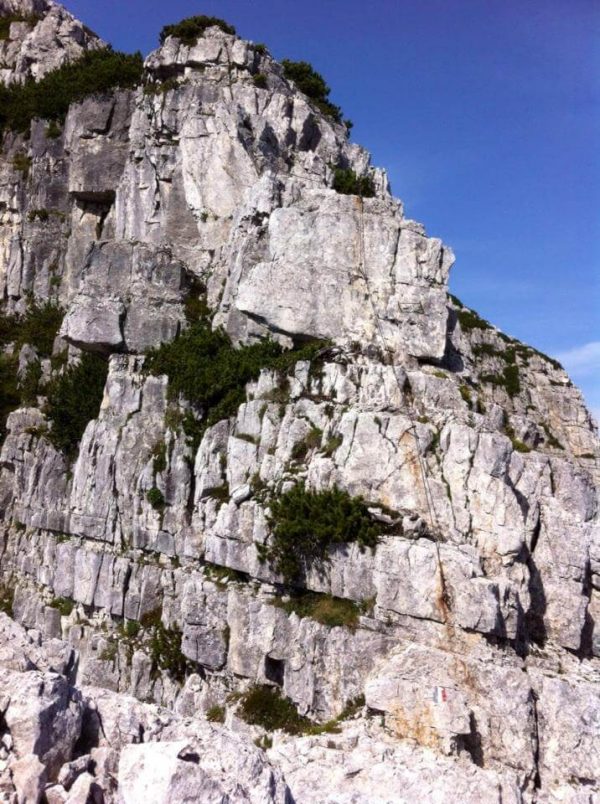 Via Ferrata at the Zuc della Guardia

Among the Via Ferrata in the Carnic Alps, the Ferrata allo Zuc della Guardia is one of those that becomes accessible first. The low altitude (approx. 1900 m) and the rather easy approach make it a good trip already in full spring. The route is not difficult, though exposed. Departure from the Cason di Lanza Pass and complete tour in about 3 hours. 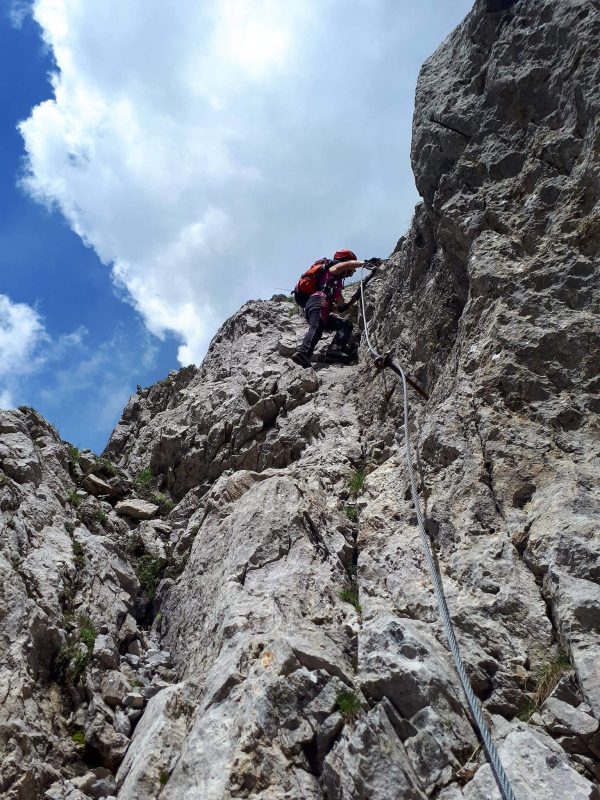 South of Lake Ledro you can take the pleasant Mora Pellegrini Aided path departing from the Passo di Tramalzo. It is a pleasant aided path with mid-hill sections and ridge stretches, never difficult but very scenic. The complete tour is about 5 pleasant hours with a couple of well-aided stretches to pay attention to in gutters and other easy aided ledges. The view of Lake Ledro in the middle of the itinerary is remarkable. 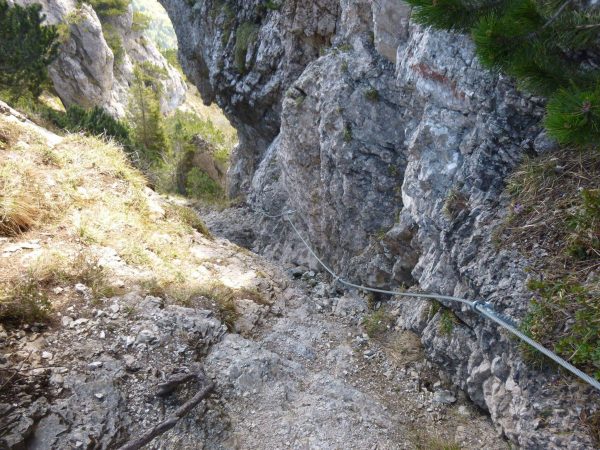 Ferrate in the Apennines and Islands

Except for anomalous winters and late snowfalls, all via ferratas in the Apennines and in the Islands can be traveled without problems in May, indeed it is one of the recommended seasons given the low altitude at which these routes develop.

On the slopes of Pratomagno in the province of Arezzo, you can take the Ferrata Romana Nesi. This route is of medium difficulty with a couple of passages that are difficult to climb. Overall, however, the route does not present significant difficulties and is made up of several jumps which make it possible to rest between one section and another. 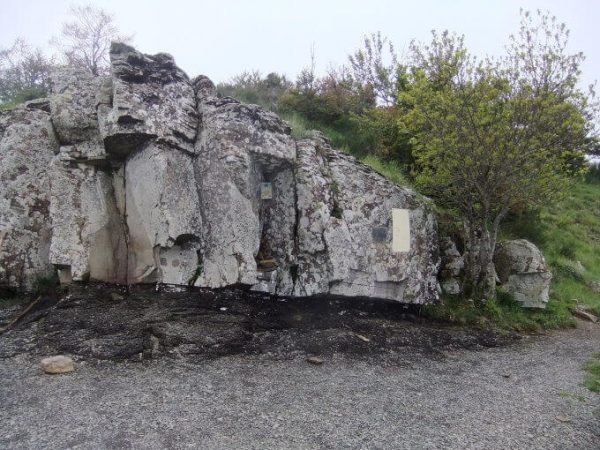