25 Via Ferrata at the Border

Between Italy and France, Switzerland, Austria and Slovenia

Our peninsula borders for three quarters with the sea while all land borders are in fact placed on the natural border of the Alpine arc. With our borders running along the ridge, many aided roads rise up to and sometimes exceed the state border. We have collected the 25 routes of via ferratas and aided paths that reach the state border along the route. These routes are generally high mountain itineraries of a certain commitment. We proceed in a clockwise direction 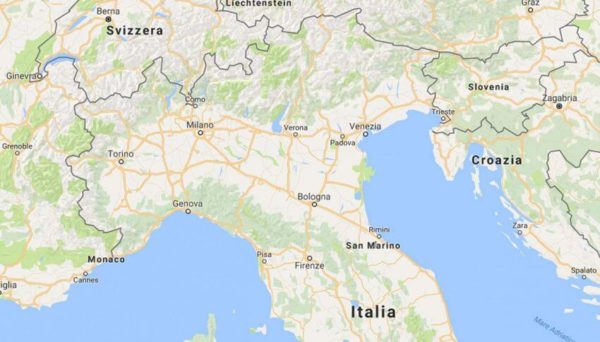 Border between Italy and France 488 Km

In the Maritime Alps is located the historic Ferrata degli Alpini at Cima Dronero, near Monte Oronaye, in the province of Cuneo. A long itinerary (over 7 hours) that goes up a classic-style via ferrata, climbing with medium difficulty passages and some exposed stairs that lead us to over 3000 m. A unique feature of this ferrata are some old brackets dating back to the first half of the 20th century that are found only in this aided route. 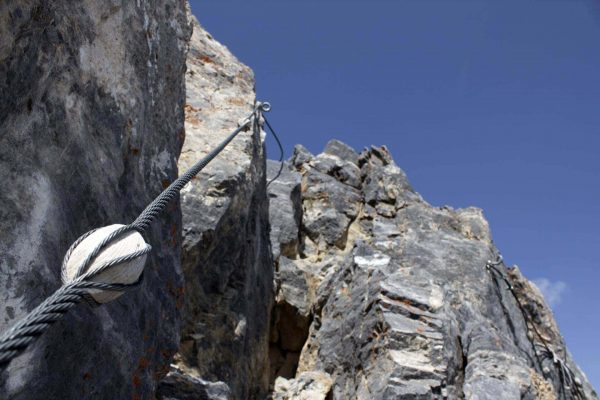 Via Ferrata of Chaberton

In 2018 the aided climb from Claviere to the summit of the Chaberton was completed. The via ferrata is made up of the combination of 3 aided routes: from the river level you first climb the Ferrata of the Low Battery, then the Ferrata of the High Battery and after a connecting stretch you proceed on a ridge that leads to the disused military fort of the Chaberton. Long, challenging and of absolute value. To be trained and in good weather conditions. 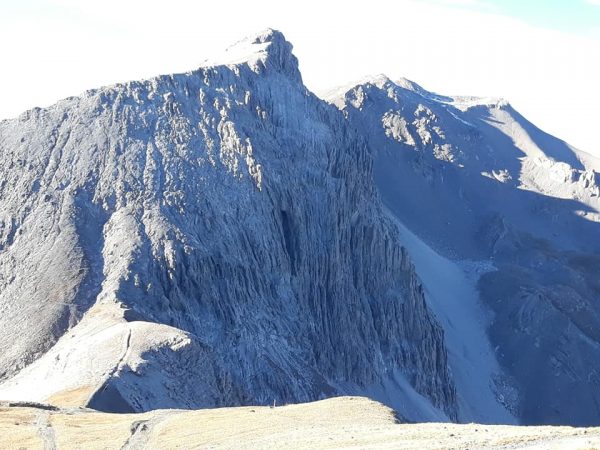 Border between Italy and Switzerland 740 Km

In Val d'Aosta on the border between Italy and Switzerland extends a magnificent ferrata of the ridge that from the Colle di Crete Seche cuts the border ridge for about 800 linear meters along an exciting itinerary with fabulous views on the Italian side and on the glaciers on the Swiss side. Noteworthy is the cairn of 2 meters (!) On the border and of a disused cabin for the border guards. The ferrata ends at Punta di Oyace after 1 hour and 30 minutes from the start. 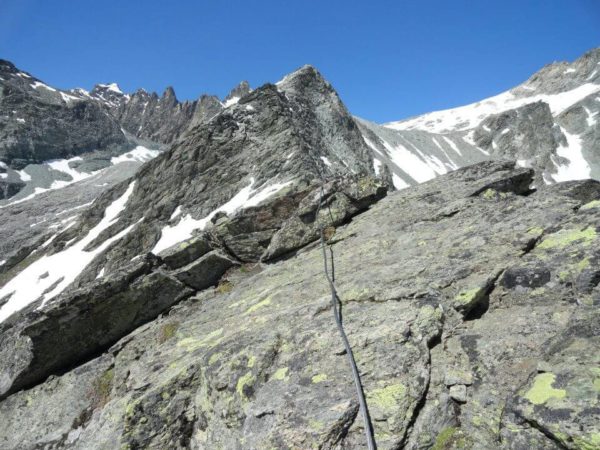 On the eastern side of Monte Rosa upstream of the cable car that connects Staffa (Macugnaga) to the Passo di Monte Moro there is a via ferrata built by the Macugnaca Guides on Punta San Pietro. The via ferrata is rather short (1h) but varied and well aided. It is located at about 3000 m and some passages are adrenaline-fueled (the suspension bridge is generally well ventilated ..) and a minimum of climbing experience is needed. Magnificent view of the Rosa Massif and the glaciers of the Swiss side. 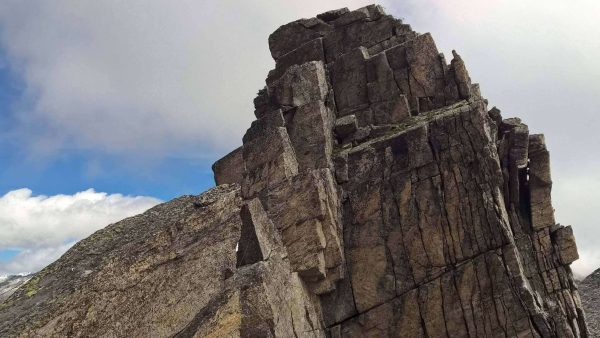 The recent Ferrata del Lago in the province of Verbania connects the Italian valley floor with the Passo del Bottarello going up some slabs using brackets and some long metal stairs. The trip is very long and you can use the Rifugio Andolla or the Varese Shelter as points of support. After a long approach (approx. 4h 30 ') the ferrata is started which lasts about an hour and leads to Passo del Bottarello (Sonningpass). For experienced mountaineers it is possible to undertake two mountain climbing paths to reach Bottarello and Pizzo Andolla on the two slopes of the Pass. The return takes place in reverse for the outward journey. 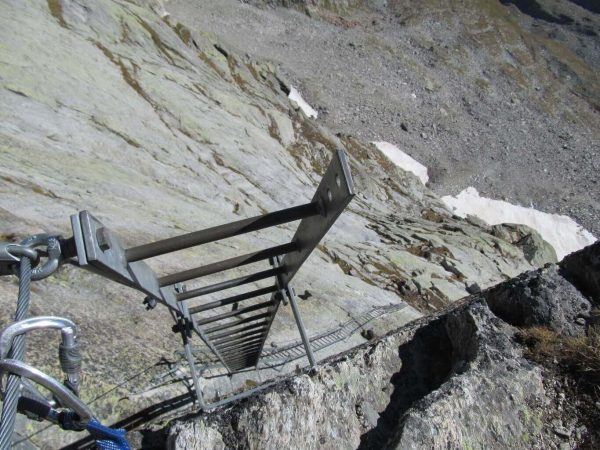 This via ferrata is not exactly on the border, but near the border of the Simplon Pass on the Swiss side. The via ferrata is modern, athletic and exposed. It does not climb to a real mountain but an airy granite wall. Ferrata that includes a beautiful suspension bridge and some vertical slabs aided with rather close brackets. Curiosity: along the via ferrata it is possible to make a spontaneous donation for the maintenance of the route. 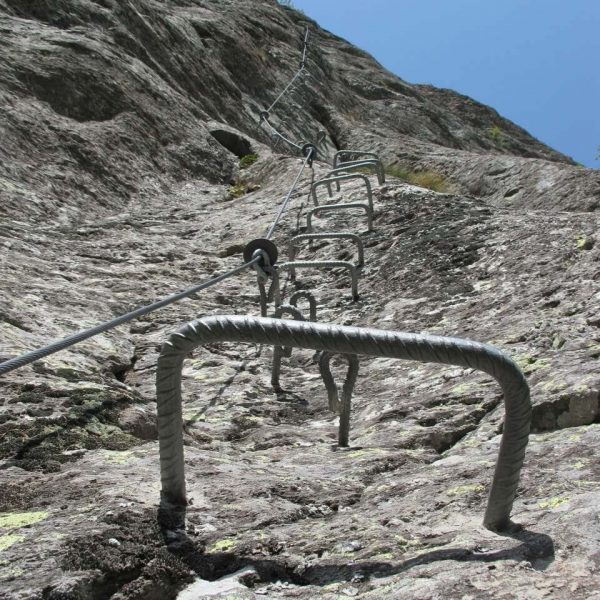 Via Ferrata Angelino to Monte Generoso

From the Swiss side of the border, you can go up to Monte Generoso, from Mendrisio in Canton Ticino. The via ferrata is rather short and, except for one passage, elementary. The major commitment is a short but exposed cross between two staircases. The view from the top of Monte Generoso is very beautiful. 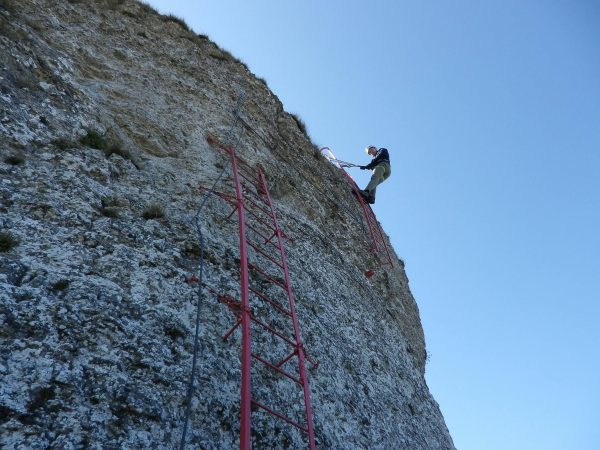 Border between Italy and Austria 430 Km

Magnificent high altitude itinerary in Valle Aurina, province of Bolzano. This route is long and ends at the new Rifugio del Sasso Nero. To reach the hut it is generally possible to walk either the via ferrata of the chimney or the ferrata of the glacier. Recent landslides on the via ferrata of the chimney advise against walking even due to the damage suffered by some stairs. The glacier ferrata has the only drawback of having to be located during the ascent. From the hut it is possible to reach climbs to the Sasso Nero reaching the state border between Italy and Austria along the climb. Crampons needed to climb to the Sasso Nero (about 2h from the hut). 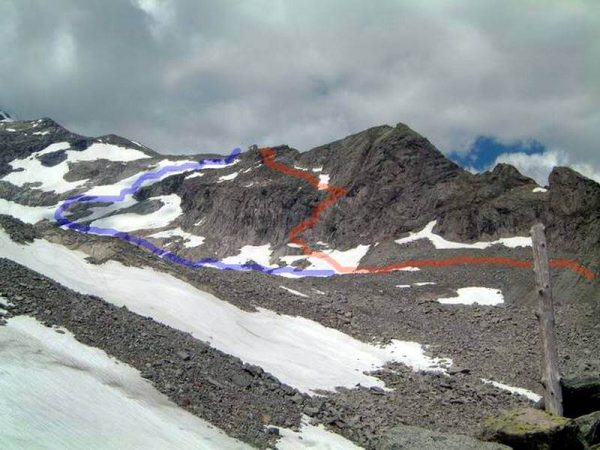 Magnificent ridge itinerary that extends along the state border with Austria in the province of Belluno. Plane route of modest technical difficulty which however requires a steady pace and good physical shape due to the difference in height. Magnificent view on the Carnic Alps both on the Italian and Austrian sides. Possibility to complete the itinerary by going up to the Cavallino. 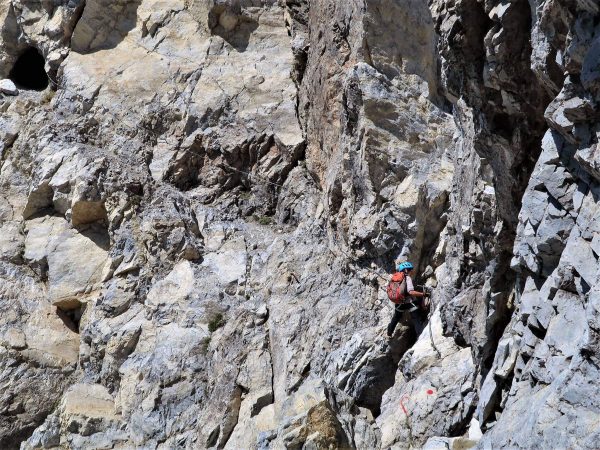 Via Ferrata at Palombino

Monte Palomino has two crosses: a small one on the Italian side and a larger one on the Austrian side. With the beautiful Ferrata del Camoscio it is possible to climb the south-east side of the Palomino and reach both crosses. The aided part of the route is very pleasant, climbing and of medium difficulty. At the end of the ferrata you are on the ridge that leads to the summit. Departure from Val Visdende in the province of Belluno. 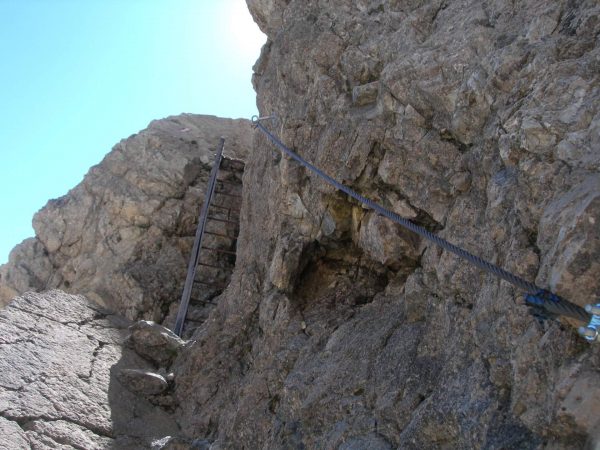 Via Ferrata Sartor at Peralba

The Ferrata Sartor is an aided route that, starting from the Calvi Rifugio near the Sorgenti del Piave in the province of Belluno, goes up to Monte Peralba, one of the main peaks of the Carnic Alps. The ferrata is of medium difficulty and ends about 30 minutes from the summit of Peralba. The return is by the steep and exposed normal route that leads for a short time on the Austrian side of the Sesis Pass. 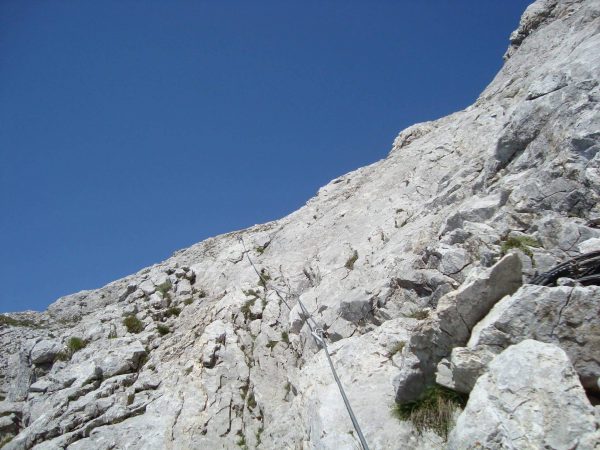 Like the previous itinerary, the starting point is the Rifugio Calvi which can be reached from the Sorgenti del Piave in the province of Belluno. The ferrata ascending to Chiadenis is very interesting from a climbing point of view. The climb takes place via a ferrata that climbs up from the northern Austrian side and, once reached the summit, descends along the southern slope with a non-trivial and exposed descent. An ideal itinerary to combine in a two-day event with a foothold in the Calvi Rifugio and climb to the Perabla with the Ferrata Sartor. 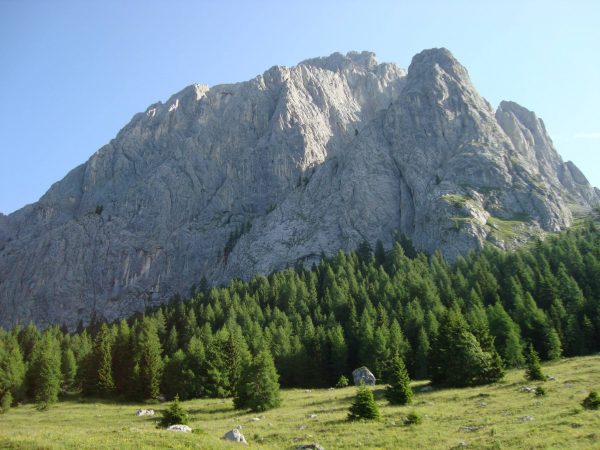 The climb to Coglians is one of the most challenging of the Carnic Alps and in general it is a very demanding climb from a physical and athletic point of view. The climb starts from the Tolazzi Rifugio on the Italian side in the province of Udine. Steep approach through the Rifugio Lambertenghi and entry into Austria from Passo Volaia. Coglians wanders around in Austria to then start, after crossing a snowfield, the difficult and exposed ferrata. Key pass on an exposed and athletic crossbar. Long return from the Italian side. 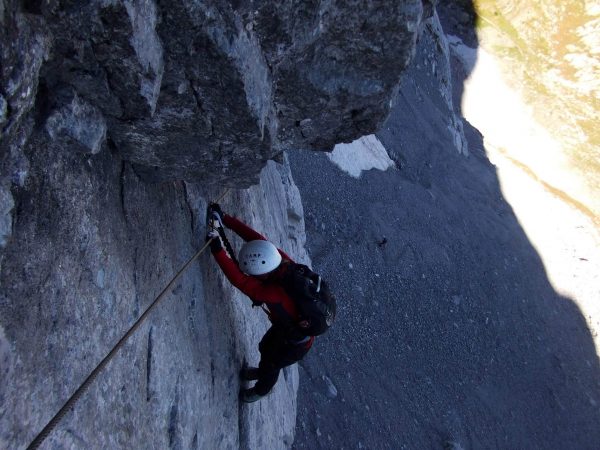 From the Passo di Monte Croce Carnico in the province of Udine you can start two very interesting via ferratas. The most difficult and challenging route is the Ferrata Senza Confini ascending to the Creta di Collinetta climbing a first section on a very smooth and challenging slab and dihedral. Subsequently a difficult ridge is covered. Challenging itinerary. 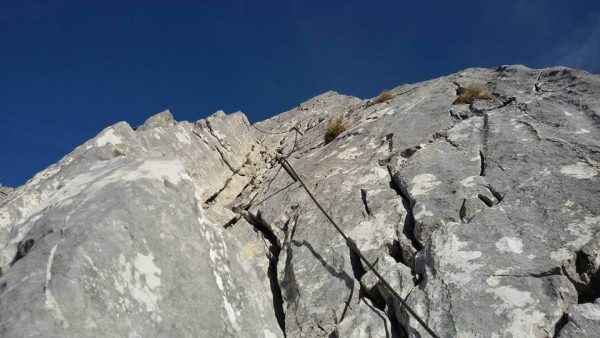 Also from the Passo di Monte Croce Carnico, you can climb a beautiful via ferrata that, from the Austrian side. The itinerary has a historical value and is dedicated to the Austrian military and mountaineer Steinbergerche led an start during the First World War by ascending from the slope where the route extends. The via ferrata rejoins the normal route in a saddle where the Ferrata Senza Confini is also inserted. 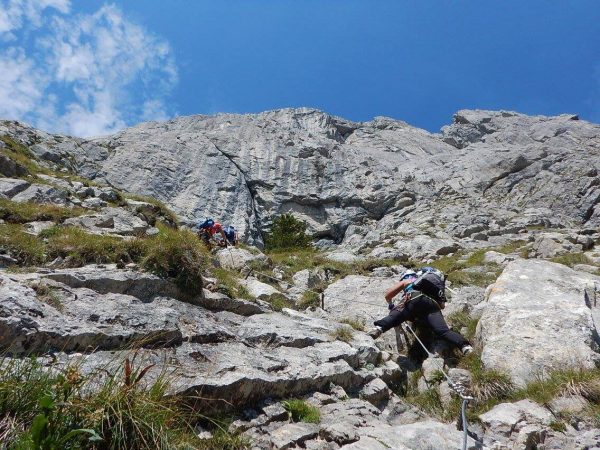 The Aided path Cuestalta rises to the homonymous mountain located on the Italian-Austrian border. The itinerary reaches the Pecol Pass of Chiaula and descends on the Austrian side to then climb to Punta Medatte. From this stretch, continue along the ridge along a very panoramic and aided path in the most exposed sections. You reach a couple of saddles and, without excessive difficulty, you return to Malga Pramosio in the province of Udine. 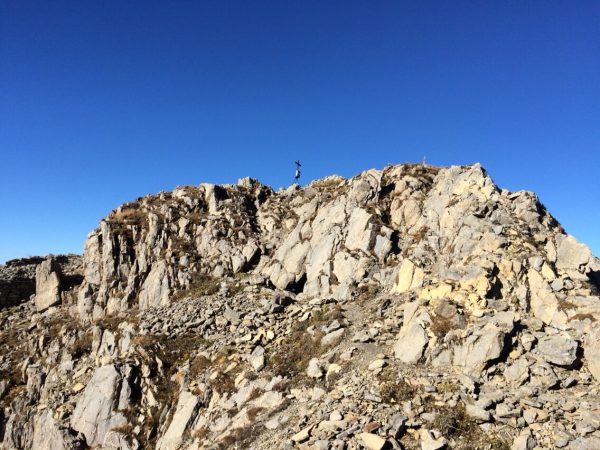 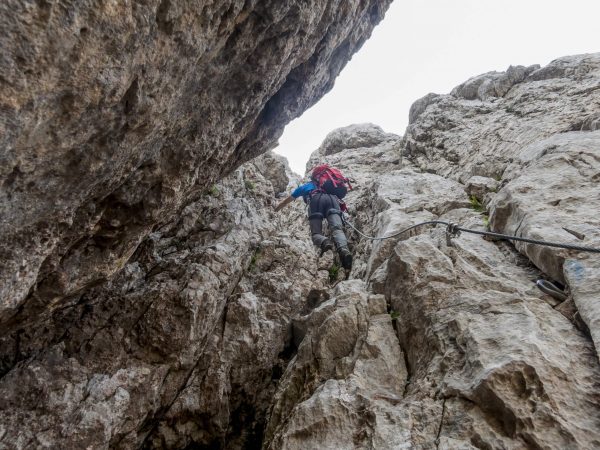 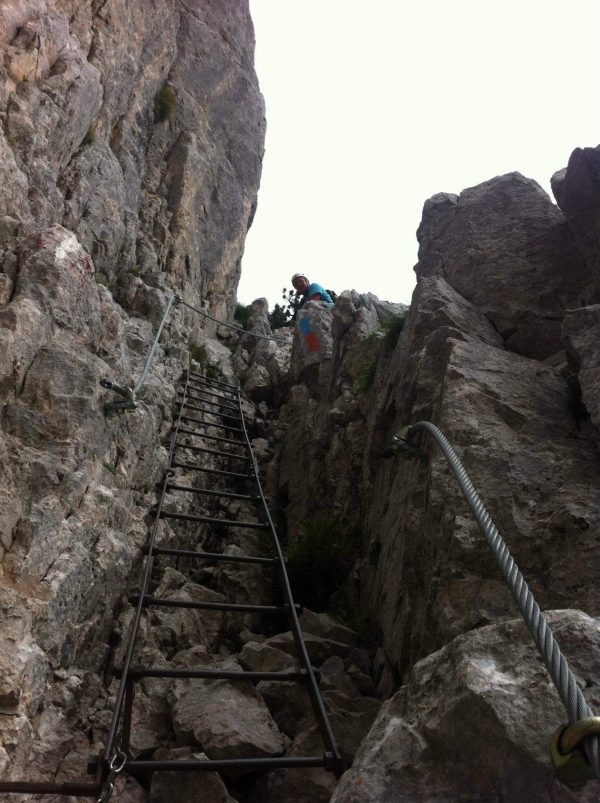 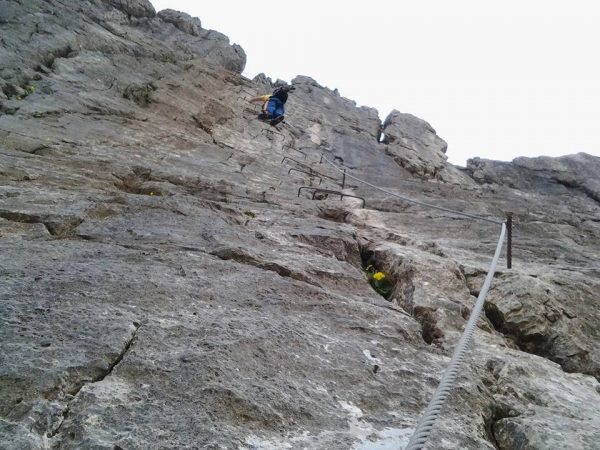 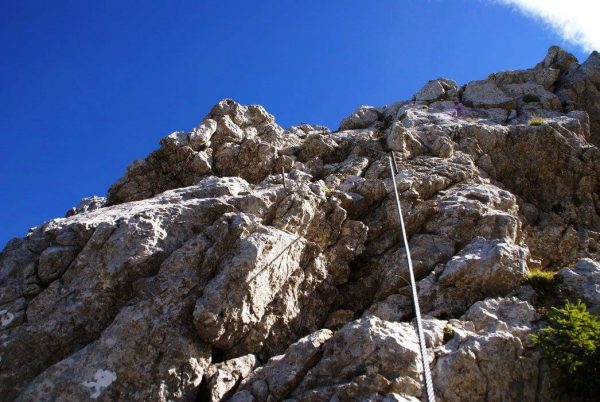 Border between Italy and Slovenia 232 Km 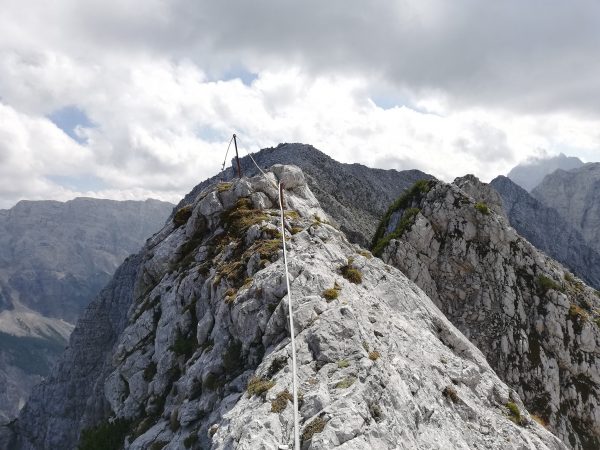 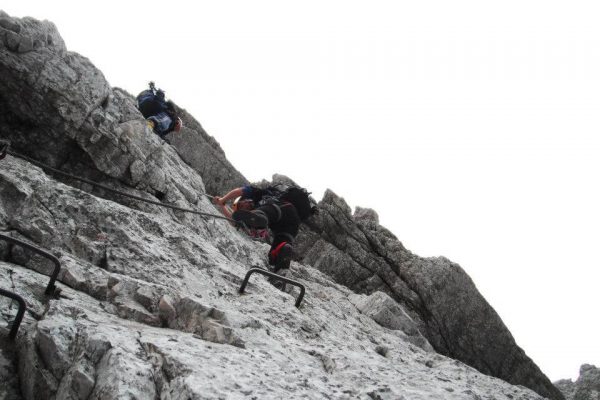 Via Ferrata at Mangart 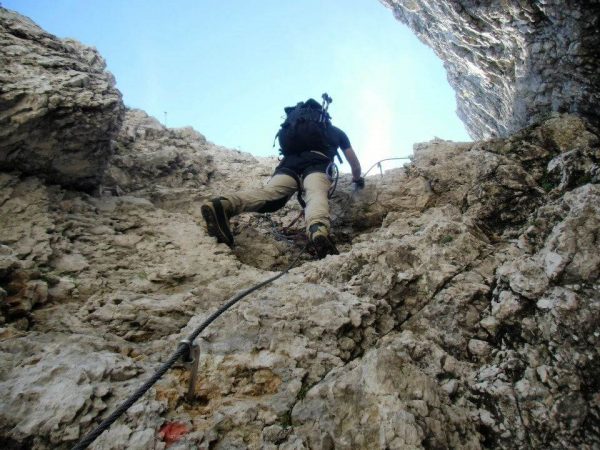 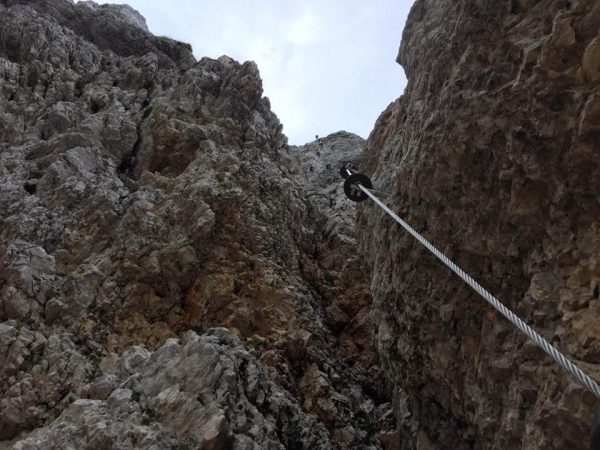 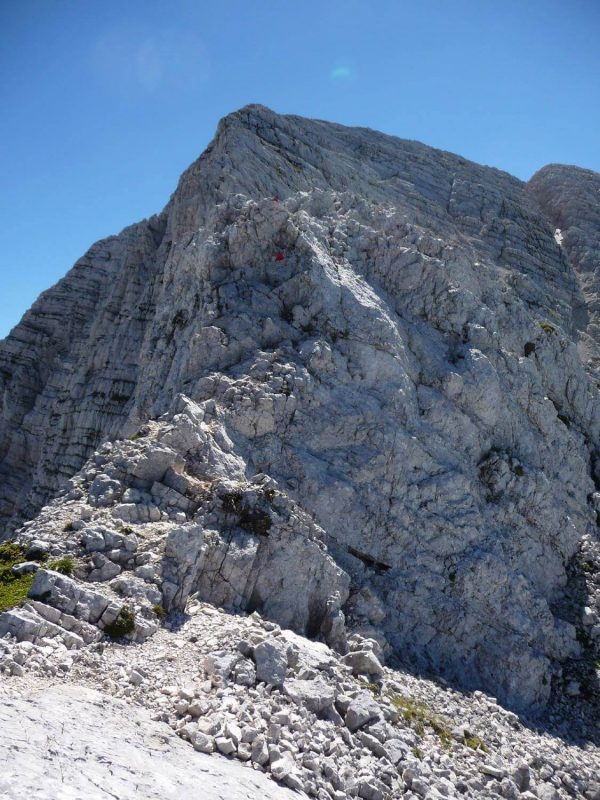