How to Filter the Review of the Via Ferrata

And find the ideal itinerary for my next trip

When we designed Ferrate365 we wanted to create one useful and easy to use tool for those who, like us, are passionate about mountains and trips. There are already plenty of online and offline tools to study itineraries, planning trips, however, we always ran into a limit. Whether we used a book of aided itineraries rather than reading blogs or collections of online reports, whenever we had to plan an trip, especially if it lasted several days, we used a lot of time. Books, guides, blogs require you to read the various reports, understand them, take the map, locate the starting point of each one, mentalize the route, imagine duration, length and then repeat everything for the various trips until you get an idea of how combine multiple routes.

Starting from the problem, we thought of a solution that was ideal for us. We wish we had a map with all the reports of the via ferrata and aided paths indicated with a placeholder. On each placeholder, there are the general details of the aided way so as to get an idea of the type of itinerary. We also wanted the possibility of filter and sort the various routes quickly so you can evaluate what's near a given route.

Here are a couple of examples that had happened to us over the years:

With this need in mind we set to work ...

Filter the reports in a second

To access the filters, click on the "Relations" link in the top menu always present on the site.

The screen you come across is divided into 3 areas:

No filters are set as soon as you access this page. Here's how they are shown. 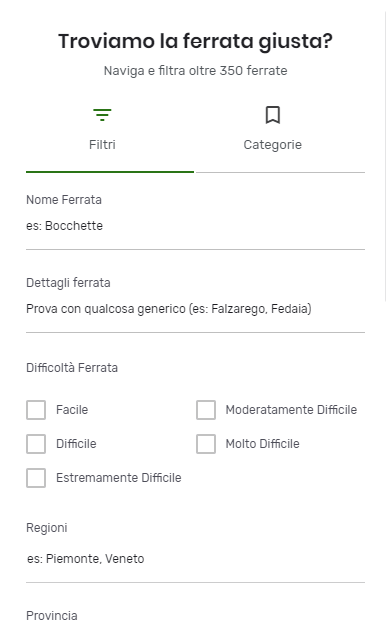 I had no filter set, the page shows all the reports. Initially we will see the first 20 in alphabetical order. To view the next 20 simply scroll the center part down and click on the buttons 2, 3 etc. The map will automatically show the placeholders of the reports. 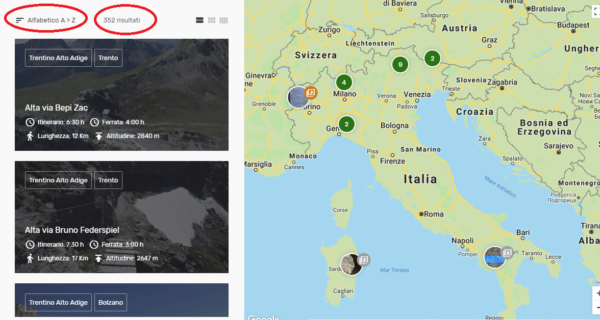 The placeholders refer to the starting point of the itinerary as indicated in the report. The report of each aided way is accessed by clicking on the relevant tab. 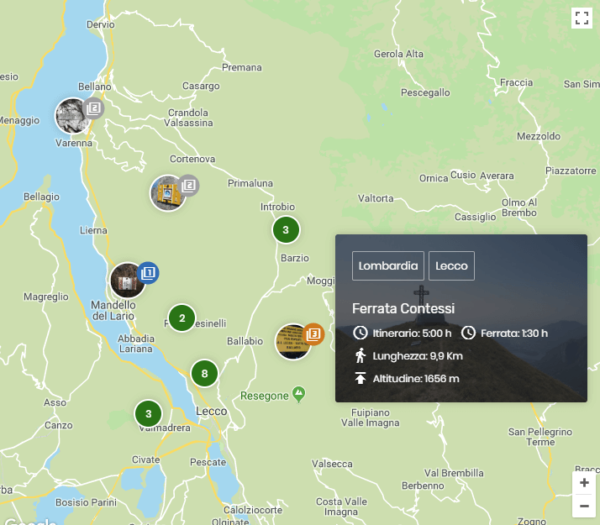 How the filters work

The filters on the left allow you to restrict the reviews to those that meet a criterion we have set. Let's start with some examples that clarify its simple operation.

In the filters section, I enter the word "Bocchette" in the "Ferrata Name" field. The page is automatically reloaded by filtering the reports of the Ferrata delle Bocchette Centrali and the Ferrata delle Bocchette Alte in the central area. Each report indicates synthetically the region, the province, the name of the route, the duration of the itinerary, the duration of the via ferrata, the length of the itinerary (Km) and the maximum altitude. The map on the right automatically shows where the two aided routes are.

Sometimes the title of a via ferrata is the name of a mountaineer and does not help us identify a group of routes. What we need is to be able to filter by a keyword entered in a report. For example, I would like to filter the via ferratas that have the word Marmolada in relation. The more specific they are, the more useful the filter is. Inserting the word "Marmolada" there are 11 reports and the map shows me the starting point of the trip.

If 11 routes are too many I can filter further by narrowing the circle. A very useful filter is that of route difficulties. For example, I want to filter only the "Moderately Difficult" routes that still include the word "Marmolada" in relation. Here we see 5 from the initial 11 reports.

Let's try now with a purely geographical criterion: we filter the ferratas in "Sardinia"

Under the "Regions" field can indicate one or more regions. I insert Sardinia and the map shows me the 6 via ferratas present in Sardinia.

Let's try to tighten the circle again: let's filter the via ferratas in the province of "Sassari"

Similarly to the filter by region, we can filter one or more provinces. Let's try now with Sassari. The map will now show me the 3 via ferratas present in the province of Sassari.

Let's try something more powerful: geographic filter and characteristic of the aided way

We have identified 12 characteristics of via ferratas (say of the # tags) that can identify similar routes. To cite some examples: short approach, presence of cable cars, suspension bridges etc. Let's try with the example of wanting to see which ferratas in Piedmont have a short approach, that is less than 30 minutes. Here I am shown 23 reports where the time between the parking and the start of the route is less than 30 minutes.

Let's start from the via ferratas in the province of Lecco: we have 30 results. The map always shows the first 20 results. If I want to see the last 10 I will have to scroll down the list of reports and click on the "2" button.

When there are more than 20 results we can refine the search. Let's take the example of a research where I prefer challenging routes. Instead of filtering through the difficulty of the itinerary, I want to be more precise. Filter only the routes that have an exposure and a technical difficulty between 3 and 5. Here the reviews are reduced from the initial 30 to 7.

Let's make a clarification. Each report shows the evaluation of the difficulty of the via ferrata due to physical effort, exposure, technical difficulty and environmental difficulties on an increasing ladder from 1 (easy) to 5 (very difficult).

Let us know what you think of the filters by commenting on this page or by sending us a message on the Contacts page.