Equipment for Via Ferrata

As indicated in the article on progression and safety on via ferrata, the objective dangers in which one can run along an aided road require the use of some equipment specially designed for via ferrata. In particular, the Fall Factor high that can be generated in the event of a fall has focused over the years on studies by manufacturers to increase safety. We describe in this article, purposely synthetic, which are the mandatory equipments to cover a via ferrata in safety.

The harness is the device that connects our body to insurance instruments and is used in all vertical activities in the mountains: free climbing (both cliff and multipitch), mountaineering, caving and via ferrata. There are differences between the harnesses that are used in the different disciplines but we do not go into this topic in detail, only pointing out to observe before purchase that the harness in question is approved for via ferrata sets.

The most debated aspect of via ferrata harnesses is the type of harness suitable to cover these routes: low harness or complete harness (or low harness). The answer unequivocally more correct from the security point of view is complete harness. The complete or integral harness consists of a belt with leg straps to which braces are added which wrap around the shoulders connected to the height of the stomach. The most common case in which these harnesses are safer than low ones is overturning in the event of a fall. This situation occurs particularly when talking about heavy weights (overweight or heavy backpacks) or reduced (underweight). Numerous tests have been carried out which show that, in certain cases of fall, a possible overturning would lead to the removal of the harness therefore a fall without protection. The complete harness helps keep the head up even in the event of unconsciousness. 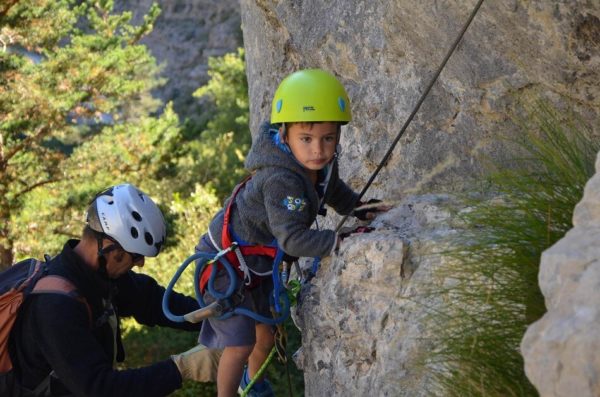 Despite this irrefutable aspect, many climbers and hikers prefer the low harnesses for greater comfort and lightness. A cross between a complete and a low harness is the combination of a low harness with a harness bib, of which there are several on the market. The bib is connected to the lower harness. Although not approved, an intermediate solution is the construction of an "eight" with a wide sling on the shoulders, joined with a snap-hook and inside the carabiner pass the lanyard in fact, combining the protection on the shoulders with the harness. This system is economical and protects in the event of a rollover even though it is less secure than the full harness or low harness combined with a harness.

We have written an in-depth guide on how choose the harness for via ferrata.

We are deliberately going to ignore the homemade via ferrata sets with traditional sinks. Although we can discuss their perfect principle of use and safety if properly constructed, we believe that, to the prices currently on the market, the sets already built offer a security of progression undoubtedly greater. We followed the story of a fall on an easy via ferrata in the Apennines (Ferrata of the Last Sun to the Stone of Bismantova) that has had dramatic consequences due to a system assembled in the house incorrectly. Unfortunately, it is late to notice the error in the case of using the heat sink.

The via ferrata set consists of two lanyards, a heat sink and two karabiners. The set is connected to the harness with a knot in choke or wolf's mouth, or by inserting the slot in the harness connection ring and passing the set inside the slot, thus choking the knot. Here a link to see the assembly.

The so-called longe they can be of different materials and shapes (some get shorter if at rest). They are sewn to carabiners which therefore are an unmovable part of the set. The carabiners must be such that they do not open accidentally due to a fall. Traditional carabiners consist of ring nuts where pressure must be applied or unscrewed to lower the ring nut. The most modern and comfortable models open if there is pressure from the palm of the hand on the side opposite the opening. The breaking load of the carabiners used in via ferrata is generally greater than those used in climbing. The shape is rather rounded to facilitate frequent unhooking.

We have written an in-depth guide on how to choose the Ferrata set. 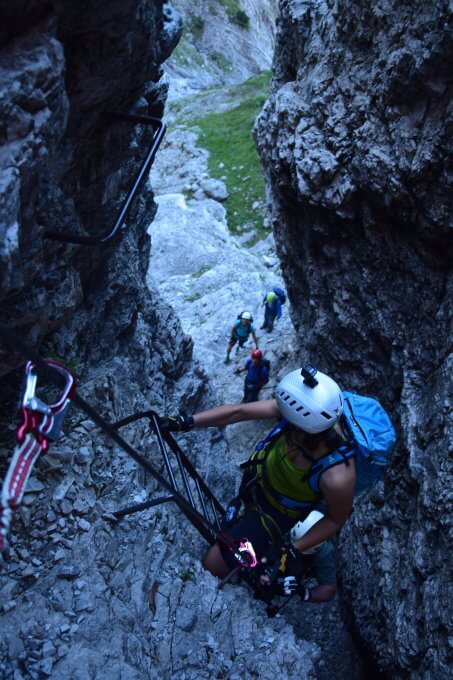 Although it happens to see people walking along well-aided routes without harnesses or via ferrata sets of dubious safety, it is certainly more rare than seeing walkers who follow via ferrata without a helmet. The fear of falling is certainly a more tangible aspect. Unfortunately, the helmet is sometimes ignored ignoring the importance that this device can have both in the event of a fall and in the event of stones falling from above without forgetting the narrow passages in which it is easy to collide against the rock. Climbing helmets are light, airy and fully adjustable. The helmet is absolutely mandatory and unfortunately, every summer, hikers who are injured (even in a serious way) are read due to the absence of the helmet. Thanks to Petzl for the self-explanatory animation below. In via ferrata, the fall can also follow diagonal directions with additional risks.

We have written an in-depth guide on how to choose the helmet for via ferrata.

Other devices recommended but not mandatory

Among the devices recommended for walking the via ferratas, however, we do not mention: