Is there a sense of the Via Ferrate?

To the question "Is there a sense of the Via Ferrate?"it is natural to answer in the first instance that of ascent. Then, remembering some itineraries where people come down from the via ferrata that we are going up, we doubt that it may not be obligatory to follow them uphill. explicit prohibition to go downhill, we try to shed light on the situations we may encounter.

Is there a sense of walking on via ferrata?

If not explicitly prohibited by clear signs or indications, the answer to this question is no. However, let us try to make some clarifications. The Italian Via Ferrata are born as aided climbing routes in mountain environments that, with the self-insurance and the support of the wire rope in addition to the installed brackets, allow you to climb otherwise mountaineering routes. The environmental context in which the vie ferrate were usually installed in Italy is a mountain environment, often high mountain. The historic Dolomite via ferratas, the western and eastern Alps as well as the Apennines, to the Gran Sasso and the Apuan Alps followed logical ascent lines that exploit the natural weaknesses of the rock. Recently, an ever-increasing number of French-style via ferratas have been built that climb very vertical and athletic walls with plenty of brackets installed. These routes are characterized by high exposure and, generally, the technical difficulties are accentuated by the chosen ascent line. Keeping in mind this change in the style of via ferratas, when it is not explicitly forbidden it is possible to go down the via ferrata downhill. 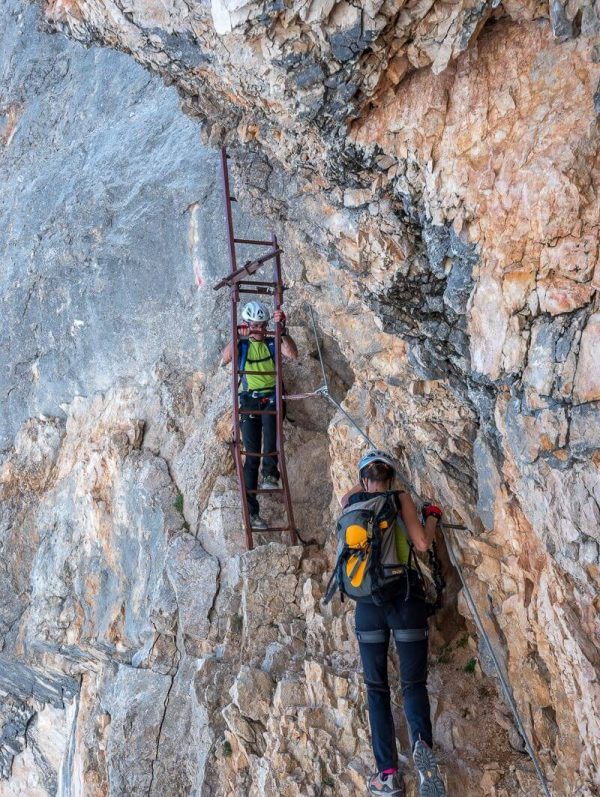 Are there via ferratas in which it is explicitly forbidden to follow them downhill?

Yes there are via ferratas where signs or clear indications prohibit the use of the route in the sense of descent. The reasons are mainly for the line of ascent, the presence of unstable material or the high frequentation of the route that could create dangerous situations in case of intersections along the route. Among the ferratas that we mention make explicit prohibition there are the Via Ferrata Aquile at Paganella, the Ferrata della Ruceia in the Val di Susa, the Ferrata Anguane rings in Val d'Astico and several others. 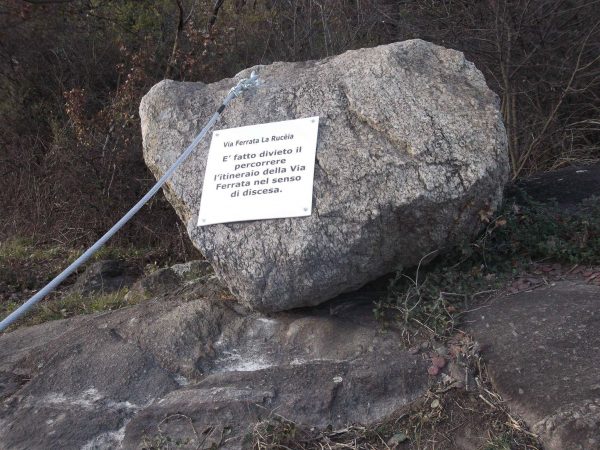 Are there via ferratas that are strongly discouraged to go downhill?

Absolutely yes. Regardless of the presence of a sign that explicitly prohibits traveling downhill, many via ferratas increase the difficulty of the route if traveled downhill. Walking down a via ferrata requires more skill and tends to make our arms more tired because we will tend to use the cable more to help the descent. It is undeniable that climbing is less natural and more difficult than climbing. We therefore feel strongly advised against going down all those via ferratas classified as Very difficult and Extremely Difficult. We also advise you to carefully evaluate whether to go down a classified route difficult. For more information on the Via Ferrata Difficulty Stairs, here is an in-depth article. 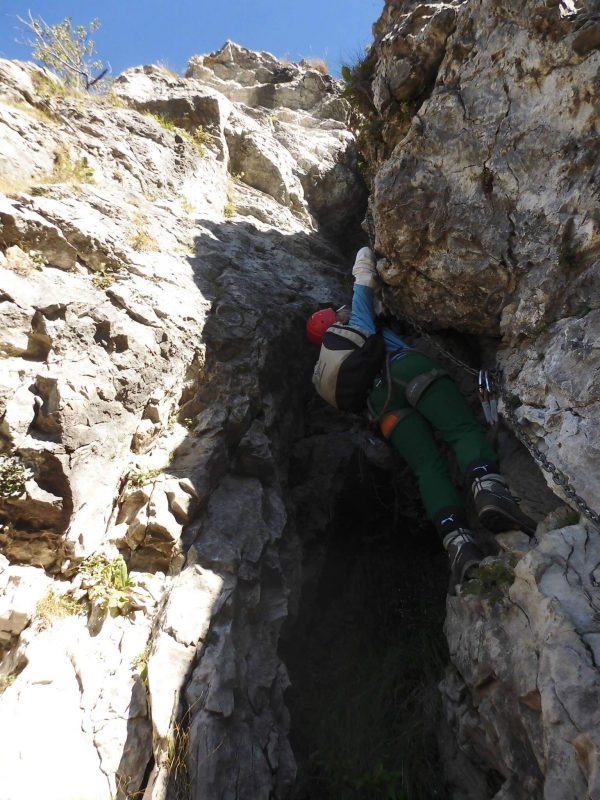 Are there ways explicitly intended to be traveled in both directions?

There are two types of routes that are commonly traveled downhill. The first type are those ways in which the descent takes place backwards for the ferrata itself, such as the Ferrata to the Averau, the Ferrata to the Procinto and the Via Ferrata at Pizzo Andolla to name a few. Beyond this typology, we also indicate those routes inserted in ring itineraries commonly crossed by both verses: the Sorapiss ring includes the Ferrata Berti and the Ferrata Vandelli, the Schiara ring includes the triptych Zacchi, Berti and Marmol as well as the Civetta is often crossed going up from the Ferrata degli Alleghesi and coming down from the Ferrata Tissi. Discorso analogo si può fare per la ferrate con sviluppo orizzontale o lungo cenge, come ad esempio la Ferrata Sasse to the Lake of Idro, the Ferrata Cengia Gabriella or the Sentiero Astaldi nelle Dolomiti. Infine, le Brenta Dolomites they are a network of via ferratas where it is common to walk along some routes in both directions. 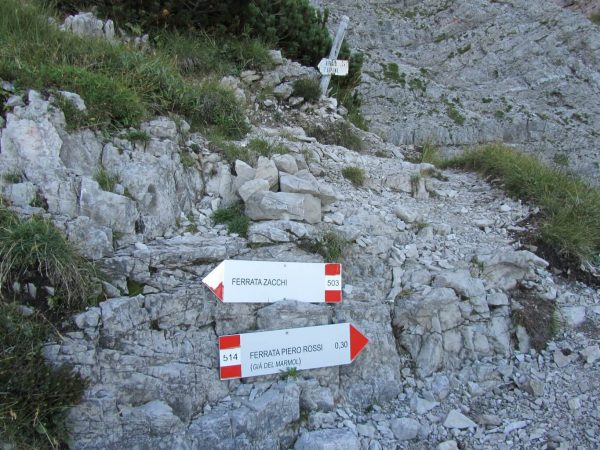 In conclusion: inquire and use common sense

If we want to draw conclusions, to the original question of the article if there is a sense of walking of the via ferratas we can answer "Unless otherwise specified, no". Except when explicitly prohibited by special signs, via ferratas can be traveled in both directions. Downhill climbing routes that are classified as Very Difficult and Extremely Difficult are strongly discouraged as those classified as Difficult require careful evaluation. It is worth adding that, as always in the mountains, good sense is needed: avoid climbing down via ferratas in periods when they are very busy because the inevitable crossing in both directions requires some maneuver that is not always easy. Multiplying these maneuvers dozens of times can make the hike even longer and more tiring than expected. Finally, further attention is needed to walk down the routes to avoid moving stones and debris that are inevitably more difficult to see while going down.