Via ferrata and children

For those who are fond of via ferrata and are lucky enough to have children, it is natural to have the desire to accompany them along an itinerary together. As in many other moments of sharing with children, it is certainly important to give the playful and fun aspect a large space but it also serves, as a parent and more experienced hiker, to take care of the little ones. It will serve to explain them all progression techniques and highlight the potential risks that must be avoided. It will be necessary to equip the children of all personal protective equipment mandatory and put them in a position to walk the routes in the best way. Not least, it will be crucial find a suitable via ferrata at their level, avoiding overly demanding routes, perhaps in very isolated contexts with very long approach or return. In particular for the first itineraries, it will be nice to climb vertically without having significant technical difficulties. 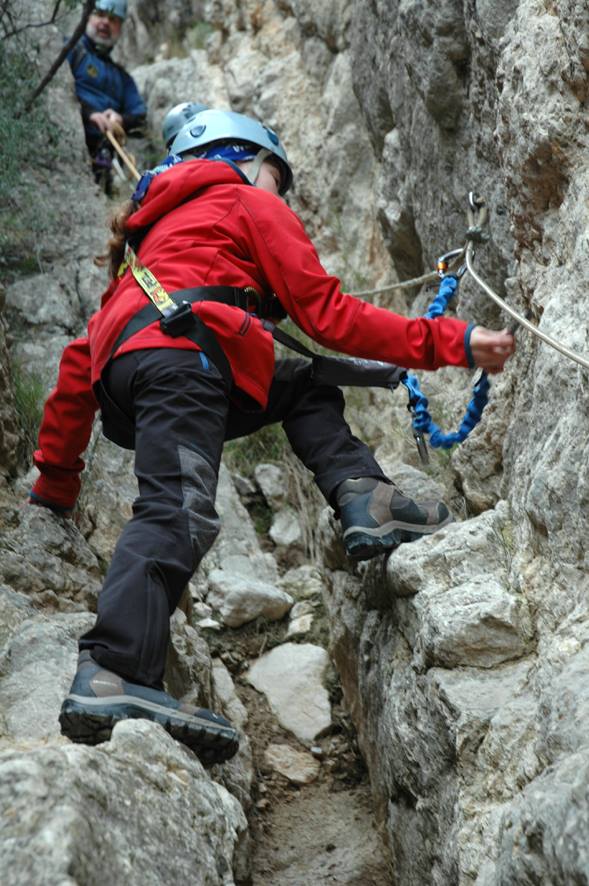 Equipment for children walking the via ferrata

As for adults, there are 3 mandatory personal protective equipment for children: the harness, the Ferrata set and the helmet. Let's explore each of these devices in detail.

The region ofharness for a child it must be of a size suitable for their height and weight. Specially designed harnesses for children are available on the market as well as harnesses that have sizes S can be chosen, provided you check that the minimum dimensions for which they are approved allow use by our baby. A fundamental aspect regarding the harness for children is the choice of a complete harness or the addition of one bib at the bottom harness. Due to the different weight distribution in a child compared to an adult, the risk of tipping is greater. To reduce the risks associated with overturning it is necessary for children to have a complete harness or harness with harness to increase safety in the event of a fall. Among the models of complete harnesses for children we mention the CT Jungle or the CAMP Child. For low harnesses we signal CT Ascent or the Black Diamond Momentum. Among the bibs available on the market, we point out the CAMP Harness or Ederrid Kermit. Recall that the harness connects to the harness via a locking carabiner or a knotted cord. For more information on choosing a harness for via ferrata, here our Guide. 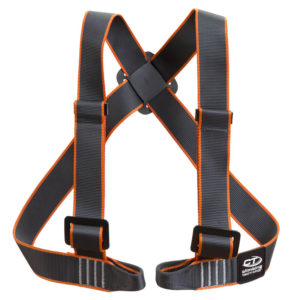 The choice of helmet must fall on a model specifically for children or of size S for those helmets that provide it. There are no special precautions for the helmet and the material and type of helmet available on the market are available on ours Guides to the purchase of the via ferrata helmet.

We come to the Ferrata set which is the most critical device for children's equipment. As described in more articles of our blog, falling into a via ferrata is dangerous due to thehigh fall factor that can be generated. The Ferrata set serves precisely to dissipate some of the energy that is generated when falling, reducing the consequences for our body. The Ferrata Sets dissipate within a weight range indicated by the manufacturer. Until 2017/2018, the EN958 standard that the Ferrata Set producers had to follow provided that the sets were designed for a weight between 50Kg and 80Kg with a maximum rope slip of 1.2m and a Stop Force of less than 6kN. From these data it is clear that many children would not be covered by these values thinking less than 50 Kg. The recent legislation (2017) requires manufacturers to extend the range of weights within which the heat sink works by including weights up to 40 Kg as a limit inferior. For children, in fact, we recommend regardless of whether to choose one of these new models that have approved heat sinks for weights up to 40 kg, such as the models CAMP Kinetic and CAMP Kinetic Rewind, the CT Top Shell as well as the Petzl Scorpio Easyhook. We have prepared an in-depth guide on choice of the Ferrata Set.

For more information on optional equipment for via ferrata, click here.

How to insure a child under 40 kg

From the previous paragraph a doubt arises: how can I insure a child who weighs less than 40 kg? Since there is no set in the Ferrata Set homologated for weights below 40 kg we will have to add a level of safety to reduce the impact of the fall factor. We are going to present a series of techniques used in climbing long routes or alpine routes that are useful in this situation. 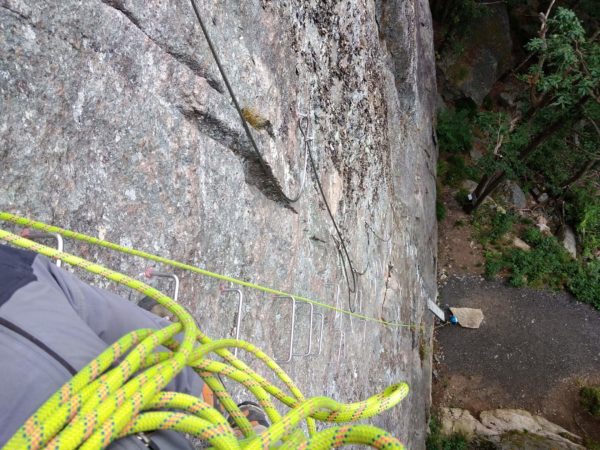 A questo punto l'adulto, sempre mantenendo i propri moschettoni del Set da Ferrata agganciati al cavo metallico, può allongiarsi con a ribbon and a snap-hook to the metal cable or to any brackets so as to be comfortable and have your hands free to ensure the ascent of the child. This progression requires using an insurance system with the boatman technique or using a bucket brake (Petzl Reverso, CT BeUp or others similar

) or with slablet. When the insurance is ready, the child will proceed uphill and the companion will gradually recover the rope keeping it always taut so as to avoid the effect of a fall to the minimum. 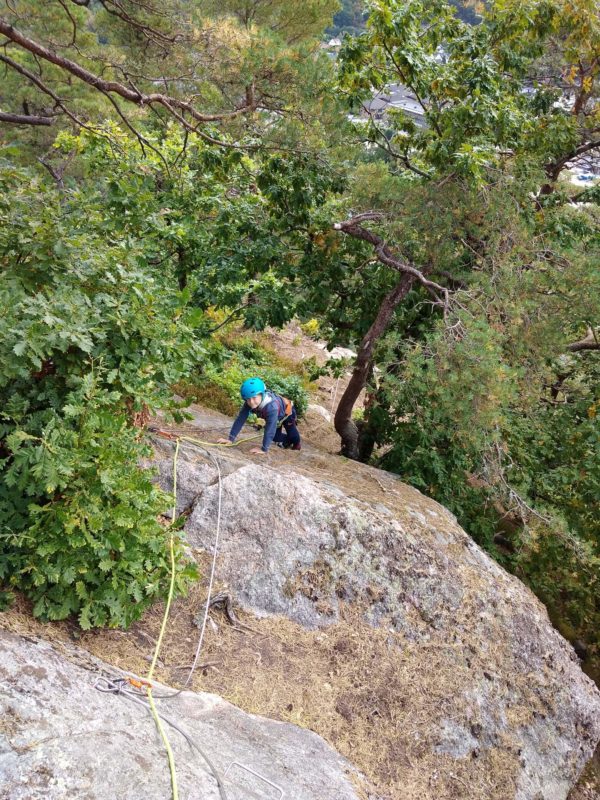 Obviously, not all sections of via ferratas are simply vertical and this complicates the progression. If you proceed on ledges, cross traverses, chimneys or discontinuous sections, it is useful for the companion to place referrals for climbing

in the stretches where the rope must follow the progression of the companion. This is to avoid dangerous waving in the event of a fall. In practice, the accompanying person will have quickdraws along the ascent within which the rope will pass as it ascends. The escorted person, having reached the references, will have to remove the rope from the quickdraws, remove them and hook them to their own harness.

All that is indicated in this paragraph does not replace the normal via ferrata progression for both the companion and the accompanying person: two carabiners connected to the safety cable and a carabiner is released at a time near a taproot. 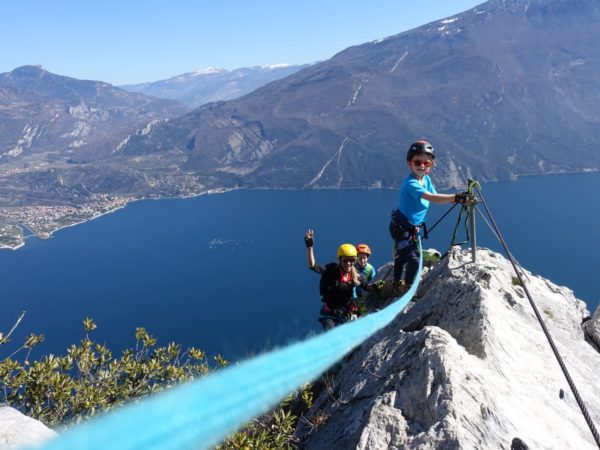 From these brief paragraphs on the safety of children on via ferrata it is clear that whoever accompanies a child must take absolute care of knowing the insurance techniques and not leaving any stone unturned. If in doubt, it is better to avoid creating potentially dangerous situations for children and possibly use one Mountain Guide that accompanies us during the ascent guaranteeing all the necessary safety for the children. This progression technique can also be used for children over 40 kg if they do not feel safe. In this case, however, modern Ferrata sets should dissipate the effect of a possible fall while keeping the risks within the limits established by the regulations. 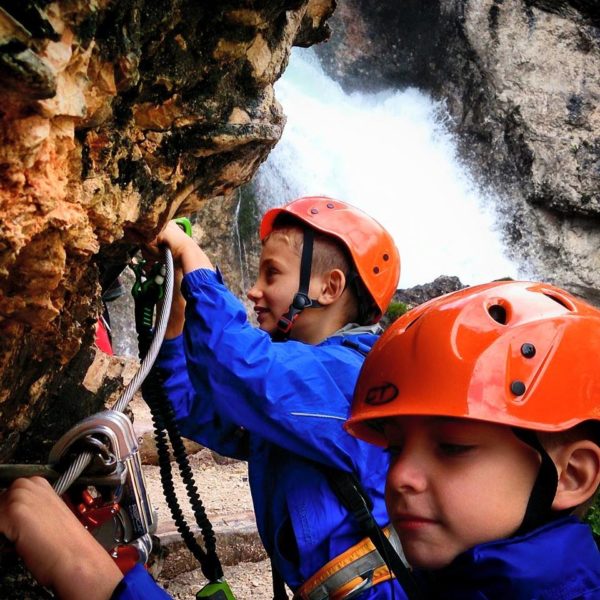 Which via ferratas are suitable for children

There is no doubt that the choice of the itinerary is essential for everyone to have fun, including children. Once they become familiar with the progression, the exposure and the rock you can raise the bar and increase the difficulty. We have collected a series of aided itineraries that we think are suitable for a nice trip with via ferrata that includes children. The list is not complete but a starting point with the itineraries divided by geographical area. We have prepared an article to learn more about climbing stairs difficulty routes.