Vie Ferrate with the Chain

Love or hate? Or a report to be built?

I remember how it was yesterday the first time I walked a chain with the chain. I was over Lecco to take one of the most beautiful routes in that area, so rich in aided itineraries and magnificent limestone. There Ferrata degli Alpini at the Medale it is in fact one of the most logical and climbable via ferratas for its level of difficulty. And yet, that day I was uncomfortable and I remember the climb very tiring and unpleasant. I was still inexperienced and, if my memory does not betray me, it was my fourth or fifth train, little or no climbing experience and a very rough progression technique. I often climbed looking at only the first two meters above my head and unconsciously progressed quickly, perhaps for "to get out of trouble"Instead of thinking about it. To make matters worse the strange and new feeling that the chain gave me during the progression. Accustomed as I was to using the rope much more than necessary, this fixture was less useful than the strained wire ropes of the ferratas I had traveled in the Apennines and in Trentino until then. 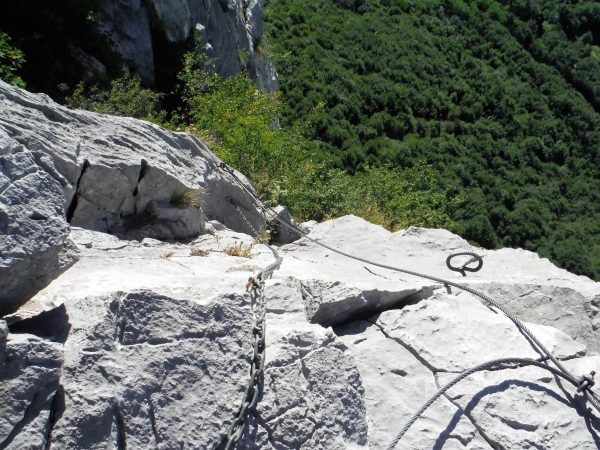 After the climb, while my partner and I descend from the steep slope Aided path of Medale I complain and I say that I don't understand why they use a chain that is so springy and not very useful. We discuss it together and almost ignore how beautiful and logical the climb was. The right amount of air and adrenaline, with exciting traits that I would have only reappreciated later. Despite the disappointment, the afternoon we climbed along the shores of the lake to walk the beautiful, pleasant and more aided Via Ferrata of the Morcate Gallery. Back home I put "the via ferratas of the Lecco area"In a drawer for the future. 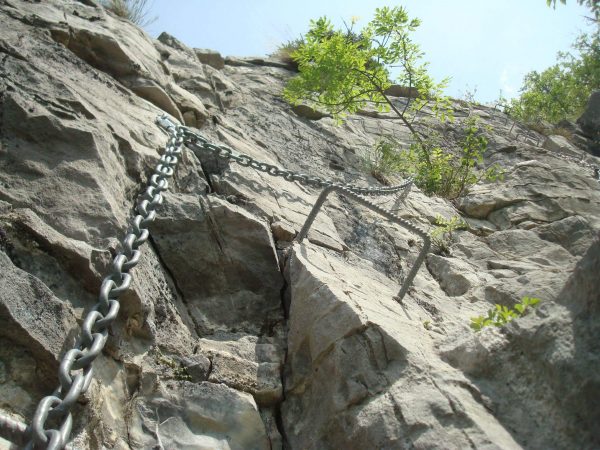 In the meantime the most natural and desirable thing happened. My partner and I are increasingly there "hungry”Of rock and we started to attend a climbing course, to then practice regularly on single pitches and then multitiri. We have not abandoned the via ferrata, indeed. We started reading them with new eyes and more educated. We have better understood how to distinguish between via ferrata with logical ascent lines and very athletic ones. Looking for handholds and foot rests was no longer a support for the use of the rope, but thereal essence of the climb which in the meantime gave much more satisfaction than before. We were also aware that a correct use of supports and holds greatly reduces the necessary physical effort. By knowing our body better and the balance required in a passage it could be done better, with less effort and therefore able to go up in difficulty. 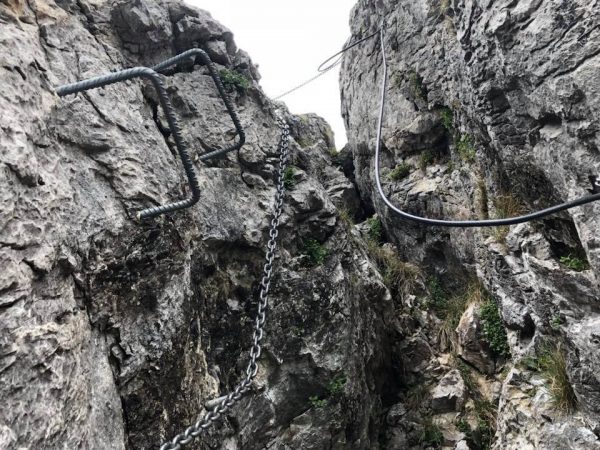 Let's go back to the via ferratas with chain, theme of this article. My thesis on this topic is the following:

I will go on to better explain my point of view dictated by the experience I have gained.

Pros and cons of the chain as a support

Except for those who grew up in the Lecco and Como areas, the via ferratas you are used to have a variable diameter wire rope. The change from a chain rope leaves everyone a little surprised the first time they walk down a path aided with a chain. 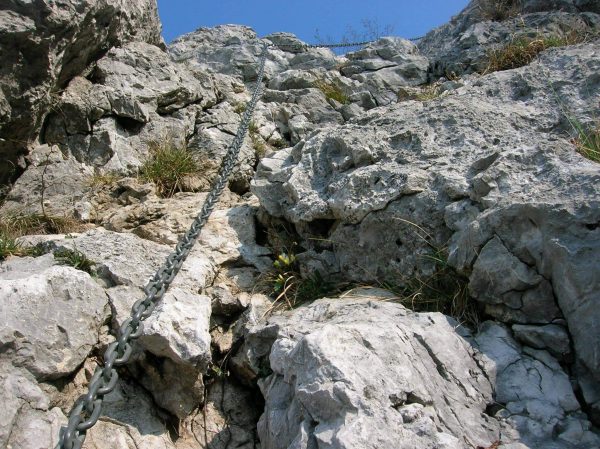 So, let's start with the undeniable negative aspects of the chain: 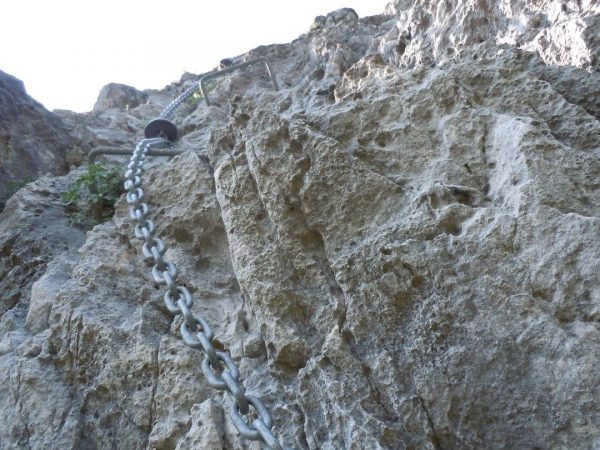 With these 4 versus well clear, there are as many pro for chains as self-insurance in via ferrata: 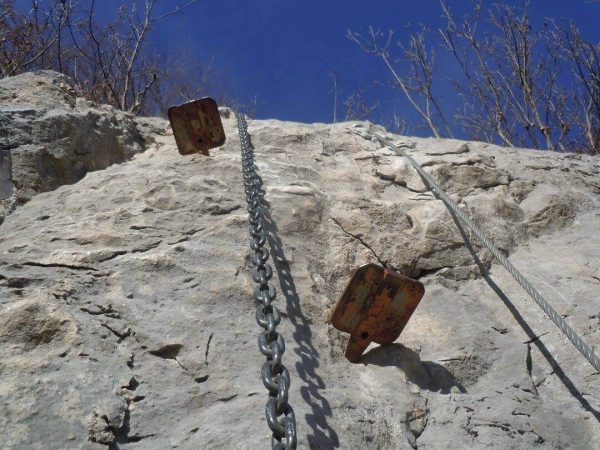 The ascent lines on which the routes in the Lecco and Como foothills are developed are very logical and traced by those who have experience in climbing. Going through many of these routes, you realize that, if the brackets or stairs are present, if they were routes to climb in free climbing they would be on the third degree, maximum quarter. Only in very demanding passages (traverse Gamma 2, Variante Zucco Pesciola, Torrione della Discordia etc.) it rises sharply in grade. The vast majority of the passages require you to climb the rock and I suppose that the trackers wanted to push in this direction using a chain that, if milked in excess, is counterproductive and exhausting. Obviously having a hand on the chain takes away a quarter of our limbs with which to climb with the result of making climbing a climb much more expensive or impossible. To enjoy the via ferratas with chains, one must take off the fear and use the rock as much as possible for the progression chain, taking into consideration that one can always move along the chain. Of course, to proceed climbing is a good idea do climbing practice to understand its logic and begin to grasp the balance and the strength it requires. A good climbing course and getting to know a climbing expert with someone expert can be extremely fun and rewarding. I would say the natural development after the passion for via ferratas ... 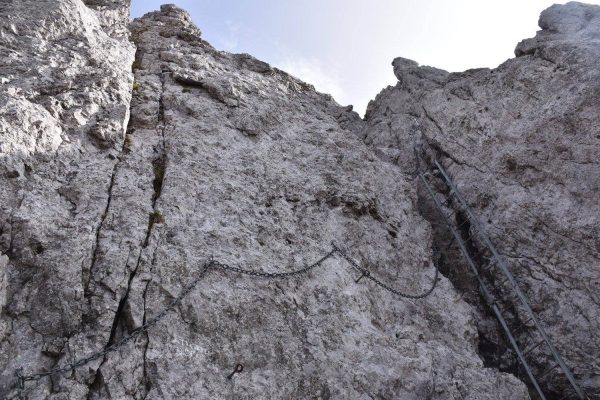 To avoid misunderstanding, an essential rule in via ferrata is “do not fall"So that must be our starting point. Climbing and climbing without over-using the chain is the preferable progression in the routes aided with a chain and, the result of personal experience, we will pass from hatred and repulsion towards the chain to a real appreciation. The progression will be fun and satisfying. Seeing is believing…