The Ferrata 30° OSA (30th anniversary of the Sport Association OSA) al Corno Rat is a difficult via ferrata developing above the municipality of Valmadrera in the province of Lecco. The via ferrata is challenging, techniqually difficult, requires experience and excellent training. It is a via ferrata exposed in many points that ideally requires a climbing experience in order to to be covered in the best way. The ferrata can be combined with the aided path that leads to the top of the Eastern Horn for an aided itinerary of about 2 hours.

The starting point is the hamlet of Belvedere, in the municipality of Valmadrera in the province of Como. When you reach the block, you must arrive near the start of a road that is closed to traffic and look for parking nearby. From there the approach path will start.

Go up the cobbled route towards the Belvedere hamlet, observing the white rock bastion of Corno Rat above our eyes. This little road becomes, at a certain point, a dirt road, passing close to farms, until reaching a signpost rich in signs for the various paths. At this junction we will turn right following the directions the OSA aided itinerary. We will continue along the path, fording a stream and at the next junction we will hold the left following the sign for the via ferrata. The path will climb steeply along the forest up to thestart of the 30 ° Ferrata OSA at Corno Rat (50' from the parking lot).

The via ferrata starts with one inclined slab in which we will have to climb looking for the few holds. Considering that you will come up with the rope to our side, we will have to pay attention to do not be pushed outwards. This is one of the most demanding steps on the via ferrata and it is necessary to proceed by weighing well the steps, also using the steps cranks to avoid excessive use of the chain. After a few meters the cable turns and rises vertically with some old brackets to support the feet. The rock in this section is very solid, calcareous but quite poor in grips. You then come to an edge that we will go up with the chain on its left and the cable on the right with some brackets for the feet. Once past the edge, the rope and chain come together to introduce us inside a narrow gutter where the first pass is particularly difficult. You must go up a ledge where it is difficult not to milk the chain. Thus the first section of the route ends, that is the ascent of the Sasso OSA, generally considered the most challenging part of the route.

Go up a path in the forest to the left with a couple of easy rocky jumps until you reach the second wall (pay attention to a crossroads where you follow the path to the left - the one on the right is the alpinistic route to Corno Rat). This wall initially runs diagonally to the right using excellent natural grips for the feet. Then it comes under one vertical wall which initially seems less long than it actually is. It starts with some brackets on the rock lying down then you go up the long wall until reaching a traverse to the left that deposits us on a narrow e iconic small terrace where you can rest after the demanding stretch and enjoy the view of Lecco and the overlying Resegone. Now we go up a difficult but short stretch. Go up a short fracture where you have to proceed in split (lolotte for those used to climbing) to gain the height necessary to change carabiner. This step is uncomfortable especially for people of low stature who will likely be forced to pull on the chain.

You exit this section under a new vertical wall that gradually becomes a chimney with good holds for feet and hands. You then reach a boulder that you can climb up on its right side, despite the chain and rope going up the left side which is more smooth. From here, go up the exposed wall above using some brackets for the feet. We then reach a narrow terrace. We go around an unmarked edge and leave again uphill along a difficult wall again, with smooth rock. Along this slab a passage is more difficult near a projection where traction on the chain is necessary to climb up it. The wall ends, we find ourselves immediately having to go around a corner before going up another more lying slab. This wall is long but less difficult than others in the route. We then reach a small terrace.

Go along a short stretch of path until you reach thelast vertical wall of the route. The wall clearly rises vertically but is more lean on than some earlier ones and there are more holds. However, this must not reduce the concentration due to the great effort made so far. After climbing up the wall, we reach the top of the Corno Rat and in fact ends the Via Ferrata del Corno Rat (1h 15 'from the start - about 2h total).

From Corno Rat it is possible to end the hike and descend following to the left the marked path "San Tommaso - Valmadrera" and then back to the parking lot (45 'from the end of the ferrata - 2h 45' total).

If you want to continue the trip, you can opt to reach the Eastern Horn. At the junction, continue to the right along a path marked by signs (sometimes red and sometimes yellow-red signs). There are some slightly exposed sections that are secured with chain. After about 30 minutes from the end of the via ferrata, we reach a sloping slab to be climbed with the vertical wall on our left. You should be able to climb in adherence with the boots by gripping with your hands along the slits. We continue on the path alternating simple stretches to some rocks and easy passages of the first degree in free climbing up to a saddle: on the left we can reach the Rifugio SEV, on the right we climb the last aided stretch. To the right we begin a very beautiful and climbing first section of slab, we go around an edge and climb a small wall resting with increasing exposure up to the end of the chain near a corner. We continue on rocks until we see the cross of the Eastern Horn. We lose a few meters on the path reaching a saddle. We go up the obvious track and reach the top of the Eastern Horn (1h from the end of the via ferrata - 3h total).

Descend along the marked path that leads to a path crossroads in the middle between the Central Horn and the Eastern Horn. Follow the signs for San Tommaso and Valmadrera to the left until you reach the point where we had deviated for the start of the via ferrata. From here backwards for the approach path to the car (1h from the summit of the Eastern Horn - 4h total).

This is the classic ferrata where one would need to distinguish between two approaches. If you tackle the via ferrata with climbing knowledge (and maybe even climbing shoes), thus reducing the traction on the chain, it is a challenging but enjoyable via ferrata. If the hiker does not have a minimum of climbing ability, he ends up using the chain a lot in different stretches and the objective risk is to get very tired and make the climb very athletic. Watch out for the greasy rock in some places.

This via ferrata has both a chain and a wire rope. It is advisable to hook the carabiners to the rope and, if necessary, use the chain to pull.

The 30th Ferrata OSA is logistically close to the Ferrata del Venticinquennale at the Western Horn. At the end of the ferrata going up to the Eastern Horn you reach the crossroads of many paths. At this point, instead of going down to the left, we continue to the right bypassing the Central Horn and reaching the SEV hut (already visible from the Eastern Horn - 20 'from the Eastern Horn). Once at the shelter, we follow the dirt road that goes westwards in a slight slope. Keep an eye on a trail that branches off to the right reaching the Terz'Alpe Hut on a slight slope. We continue following the clear red and white signs until we reach a small religious gazebo. We follow the sign for the Ferrata di Canzo towards the right downhill until we see the start with the showy and robust chain (about 45 'from the Eastern Horn - 4h 45' total). Go up the Ferrata (1h 15') and we will see on the left the red signs that come down near a saddle. We go down to a crossroads where we will keep the right following the red signs along a path that goes around the north wall of the Western Horn. We will then reach the saddle between the Western and Central Horns. We follow to the right in descent the path that goes down towards San Tommaso. In about 40 minutes we reach an obvious marked saddle. Keep to the left and follow one of the many tracks that descend to San Tommaso. We will reach the area reached on the outward journey (approx. 1h 30' from the end of the Ferrata to the Western Horn). Get off the parking lot (20'). For the itinerary departing from San Tommaso with ascent to Corno Rat, then Corno Orientale, then Ferrata the Corno Occidentale and return to the loop, consider between 7 and 8 hours in total.

Going down towards Sambrosera, you could take the path to the right where the Aided path to the Moregallo or the Via Ferrata at Canalone Belasa. You could also go down to Valmadrera and after passing San Tomaso take the signs for the Aided path of the Vasche. However, all these itineraries are not very logical as return paths and we advise you to follow them as separate routes. 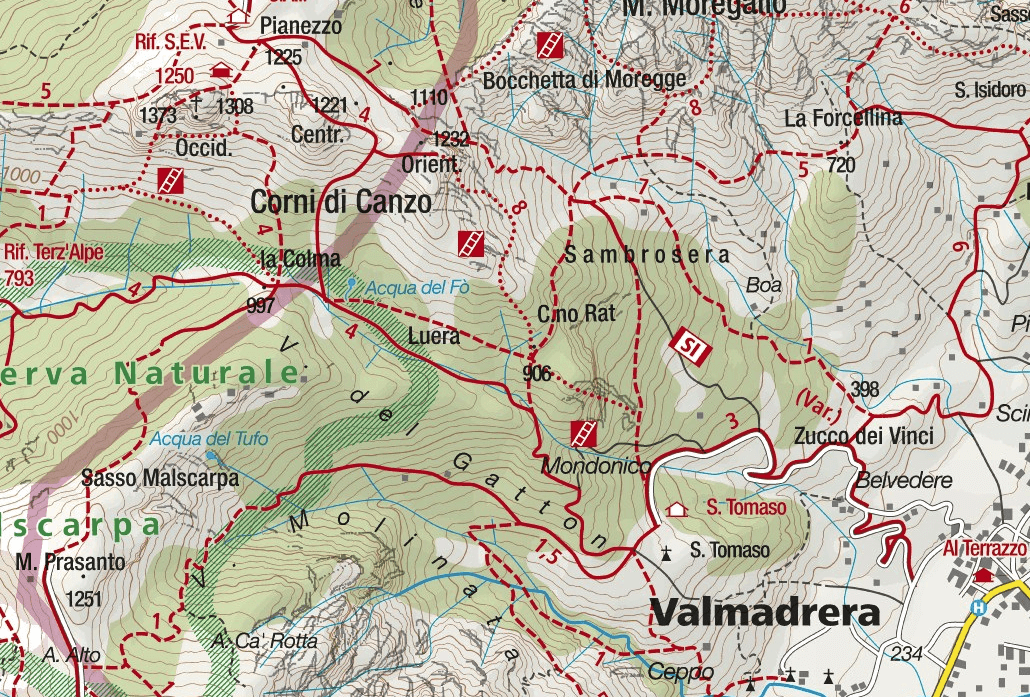 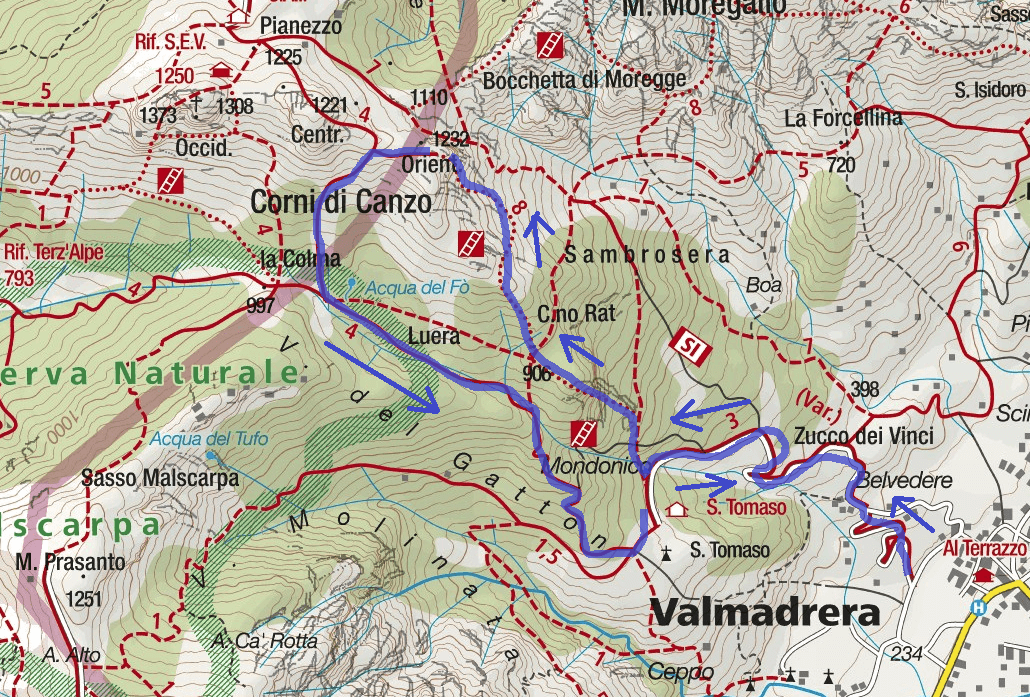 Images Ferrata 30 ° OSA (Corno Rat). The images included in the report were sent to us by the users of the site. If you are interested in sending us photos, use the form on the left or send them to our Facebook page.