The Ferrata Strobel ascends to Punta Fiames in the Pomagagnon Group above Cortina d'Ampezzo. The ferrata is of medium difficulty with some challenging stretches but generally well-climbed or well-aided. Challenging return along the gully that descends from Forcella Pomagagnon.

The starting point is the Fiames hotel in the homonymous village north of Cortina d'Ampezzo. The town is on the SS 51 that connects Cortina d'Ampezzo with Dobbiaco. Once in Fiames, we find the large parking lot next to the hotel. We cross the road on the north side towards the Pomagagnon e Punta Fiames and we identify the signs with red and white signs entering the coniferous forest. Directions for Google Maps available here.

We set off along the path that climbs steadily into the coniferous forest. We follow the indications that after a couple of stretches on forest and cycle paths go up into the woods. The stretch in the woods is in a moderate slope but after twenty minutes we leave the woods and begin a strenuous climb on a quite steep detrital slope that leads us under the wall on which the ferrata extends. We climb some easy rocks and reach the start slab of the ferrata (1650 m - 1h from the parking lot) where it is advisable to put on the harness and the bob while not yet beginning to climb the actual via ferrata. We continue on a ledge for about 15 minutes in a southerly direction and we follow the red signs until we meet the start of the equipment after about ten meters of rocks not difficult to the left (1740 m - 1h 15 'from the parking lot).

The first section of the via ferrata is one beautiful vertical wall well placed where, after the first vertical meters, the cable bends to the left and continues to quickly gain share. The cable loses verticality and we proceed with an easy traverse to the left of 3-4 meters. We continue in vertical ascent but without excessive difficulties reaching a diagonal stretch that leads us inside a first chimney. This initially appears as a crack that widens and in which we will have to insert ourselves for go up his left side exploiting also some pegs present. The chimney is not particularly difficult as the left side is well attached. We leave the chimney and continue on some rocks until we meet a second more vertical and exposed chimney than the first one. Let's start inside the chimney and then come out on the edge in a slightly athletic movement trying to climb over the wire rope. We leave this chimney and find ourselves again climbing some rocks that are not difficult but exposed. We climb facing some jumps and reach a panoramic terrace in which to take a breath before proceeding.

We proceed to the next section of the via ferrata after one connecting stretch between rocks and pines (1960 m - 1h from the start) The cable proceeds again very vertical on rather smooth rock on which it will not be easy to climb in fact finding some brackets to give us support in the progression. We bend to the left in high exposure on a traverse with which we then reach a ledge and a new rocky jump before a connecting section longer than the previous one where following the cairns we reach the south side. We reach a new aided jump and then, after a ledge on the right, one long metal ladder (2000 m) from which we go out to the left into strong exposure on a wall aided with some metal brackets and pegs. This rather aerial and demanding passage introduces us to the last passages of the route. We climb on a panoramic balcony before the last section of the route.

We leave towards the left a traverse with good supports for the feet until we reach a rocky roof over which the cable rises vertically. Near a ledge we meet a peg that helps us in this passage and we continue uphill and exposed but well-held. We reach a stretch of rocks that puts us in a new balcony before starting diagonally to the left on a very well-appropriated and easily climbable stretch. We are at the last passages of the route characterized in large part by small rocks and some more marked leaps and a pair of not particularly challenging cross-traverses. Near an edge we climb the last difficult meters and we are on the summit slabau where the equipment ends. We follow a path to the right following the cairns and we reach the summit of Punta Fiames (2240 m - 1h 45 'from the start - 3h total) with magnificent panorama on the Cristallo and the Tofane.

Let's go back to the last few meters of the path followed until we find a track on the right that descends towards the north Pomagagnon saddle (2178 m - 20 'from the summit). Now let's go down to the right in the long detrital gully following the signpost 202. It's steep and you need to be very careful keeping the right side, if possible. We go down reaching the Gravon del Pomagagnon where on the right you can follow the tracks to take the Ferrata to the Third Cengia del Pomagagnon with which to climb to Punta Erbing. We keep to the left for tracks intercepting the Path 218 that to the right goes down in the direction of Fiames where through the comfortable cycle we reach the parking lot (2h 15 'from the summit - 5h 15' total).

The Ferrata Strobel is a medium difficulty via ferrata, pleasant, climbing and exposed to the right. State of the equipment is good. We meet a couple of technically more challenging passages (the chimneys) and exposed (passage after the staircase) but overall never prohibitive. The long and exposed staircase is not aided with a rope on its sides so we will have to make sure of it. The landscape from the top is amazing, as often happens in the ferratas around Cortina d'Ampezzo. Attention to re-entry into the detrital gully which requires concentration and a firm foot. Telescopic poles can be very helpful.

As indicated in the report, the approach for the Ferrata to the Terza Cengia del Pomagagnon intersects and is a natural option to continue the itinerary. If you return to Fiames, in the immediate vicinity we find the starting point of the itinerary for the challenge Ferrata Bovero at the Col Rosa. Going up in the direction of Dobbiaco we meet the first Aided path to the Fanes waterfalls then the Ferrata Renè de Pol. Going down towards Cortina, we can continue towards the Tre Croci Pass where we can take the Via Ferrata Bianchi at Cristallo and Aided path Dibona, both at the Cristallo. 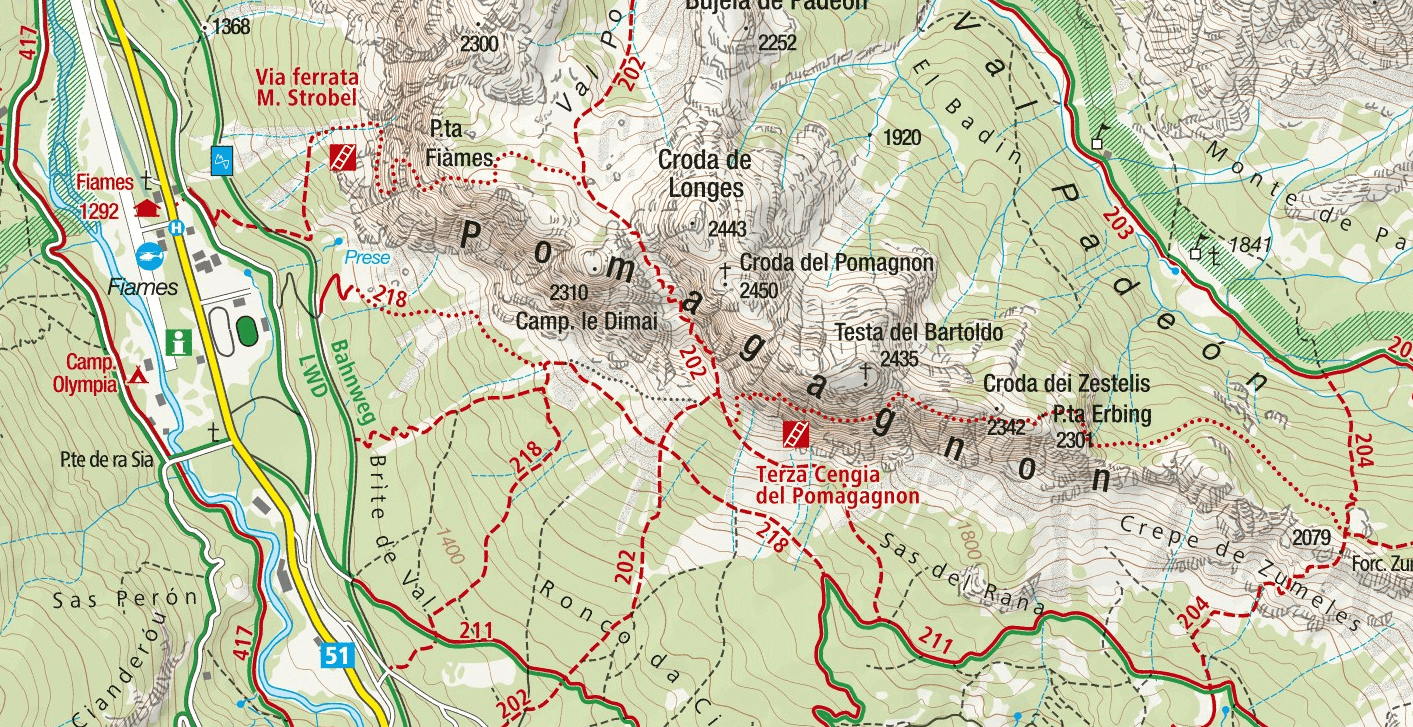 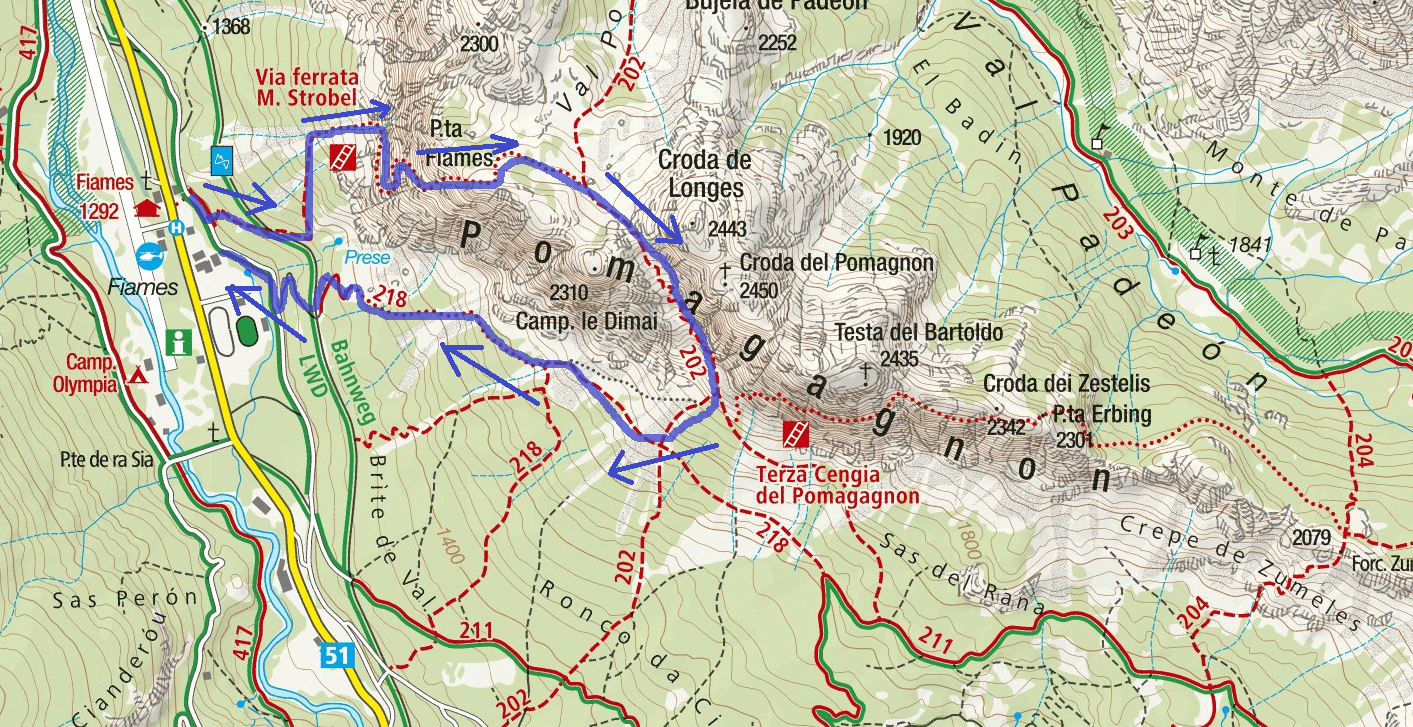 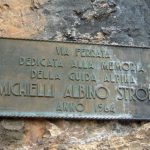 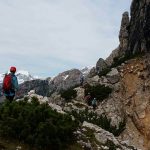 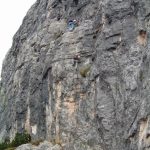 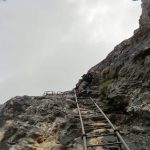 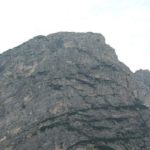 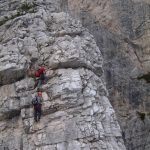 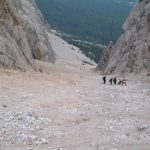 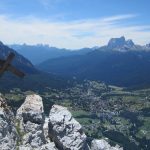 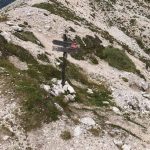 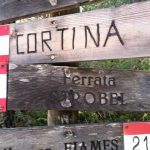 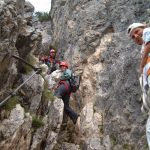 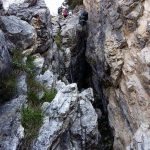 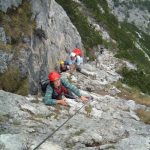 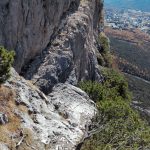 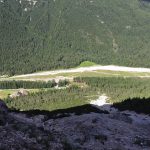 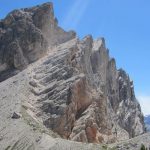 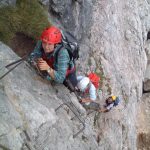 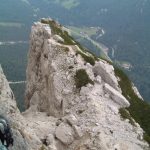 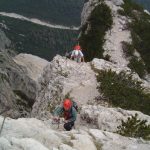 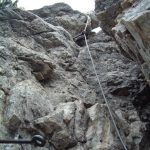 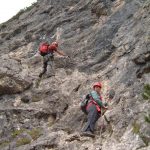 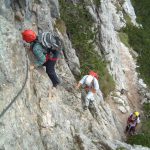 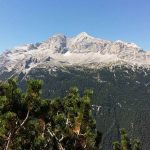 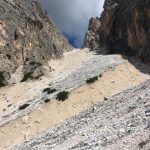