Ferrata Berti at the Schiara

Review of the difficult Ferrata Berti at the Schiara. Ferrata that extends in altitude as a natural continuation of the Ferrata Zacchi or Sperti to climb to the top of the Schiara from the western side. The descent from the Schiara occours with the Ferrata Piero Rossi to the Rifugio VII alpini. A long itinerary with a high difference in height, where it is advisable to divide the climb in two days and follow it only if well trained and with good hiking experience.

The starting point of the itinerary is the village of Case Bortot in the province of Belluno. From Belluno we follow the regional road of Col di Lana and shortly after at a roundabout we follow on the right to Bolzano Bellunese and to the Parco delle Dolomiti Bellunesi. We keep the road past Bolzano Bellunesi, then Gioz and still on the same road we now meet the signs for the Case Bortot Hut. We continue on the road until we reach the town of Case Bortot where we pass the hut and after a few meters we meet an open space where it is possible to park with the road that ends. Directions for Google Maps available here.

The first goal of our approach from Case Bortot (695 m) is to reach Hut VII Alpini at the foot of the Schiara. Left the car in the parking, we cover the path with signpost 501 that will lead us to the shelter. The beginning is very pleasant on a wide path in the woods and clearly visible the Schiara and the Gusela del Vescovà on the left. We proceed along the path that descends to Ponte del Mariano (30 'from the parking lot) beyond which we meet a signposted junction: on the right rises the CAI 507 which reaches, among others, the Pelf peak. We remain on CAI 501 in the direction of the Hut. Now climb decisively into the woods and quickly gain altitude along the torrent Ardo. The climb takes place in large part in the sun and it is tiring although not difficult. We reach one series of hairpin bends where the valley opens. We go up this stretch and we are in the clearing where the VII Alpini Hut is located (1502 - 2h 45 'from the parking lot). The Rifugio VII Alpini is a crossroads of trails in the Schiara Group.

To reach the start of the Ferrata Berti from the Rifugio VII Alpini we have two options:

In this report we consider the climb from the most exposed, direct and difficult Ferrata Zacchi. We follow the signs behind the shelter ascending towards north facing the impressive southern walls of the Schiara. We reach thestart of the Ferrata Zacchi (read the report here). At the crossroads between Zacchi and Piero Rossi it is important keep left and continue on the Zacchi which we will conclude at Ugo della Bernardina Shelter (2320 m - 2h from the start - 5h 30' total).

Before reaching the Shelter, we follow the trail to the right of the path on stones and we meet the start of the Ferrata Berti. We go up immediately a first metal ladder followed by a section of ledge reaching a rather raised gutter that we go up first on the right side then moving to the left side. Let's go up one ladder in slight overhang (key step) and climb the gully followed by a chimney rather narrow to the left very beautiful and climbing. We leave the chimney, walk along a stretch of connecting path surrounded by rocky pinnacles, and to the left we carry ourselves under a quite leaning wall about twenty meters to climb back up using the good grips present.

We are now on an aerial tract of ridge with some very exciting and easy passages and challenging. Let's go up one further ladder to then reach a series of brackets and climb around a sharp edge. We now walk along the aided ridge section going up to the end of the equipment. We follow the cairn and we are in summit to the Schiara (2565 - 1h from the start - 6h 30 'total), where the summit cross it was sawn from some vandals some years ago.

From the summit cross we cover the ridge that descends towards the east foresummit. This first section of the descent is exposed, exciting and only partly aided. Pay particular attention in case of fog to identify the track to go down towards Forcella Marmol. As we go down, we will notice the Bocco Zago Shelter near the Forcella del Marmol. We reach the saddle marked with a signpost where we will keep the right going south until we reach the shelter. From this point we go down to the Rifugio VII Alpini along the Piero Rossi Ferrata (read the report here) that shares a first section with the Ferrata Zacchi up to a crossroads. From Rifugio VII Alpini (3h 30' from the summit) we return to Case Bortot for the approach path (2h from Rifugio VII Alpini - 12h total).

The Ferrata Berti has two or three difficult passages separated with passages that are not too demanding. It is, however, inevitably inserted into a long itinerary that includes at least one other via ferrata and for exposure, effort and difficulty deserves to be classified as difficult. Beware of the fog that is often present in this area and of the unprotected sections in both the ascent and descent phases along the east ridge.

As indicated in the report, the Ferrata Berti ascending to the Schiara is inserted into an itinerary that includes a via ferrata both in approach (Ferrata Zacchi or Sperti) and downhill (Ferrata Piero Rossi). The entire itinerary, as highlighted in the report, is very demanding from a physical point of view and the three via ferratas are all to be considered medium-difficult, exposed and in an isolated mountain environment. A good programming is therefore necessary to cover this itinerary with stable weather. An alternative for the descent is to reach Forcella Marmol and to go up to the Pelf with the Aided path Guardiano to return to Case Bortot with a long loop itinerary.

The Belluno area offers other interesting itineraries with shorter approach and return: the Via Ferrata Parete dei Falchi, the Ferrata della Val Gallina and the exposureed Ferrata del Vajont. 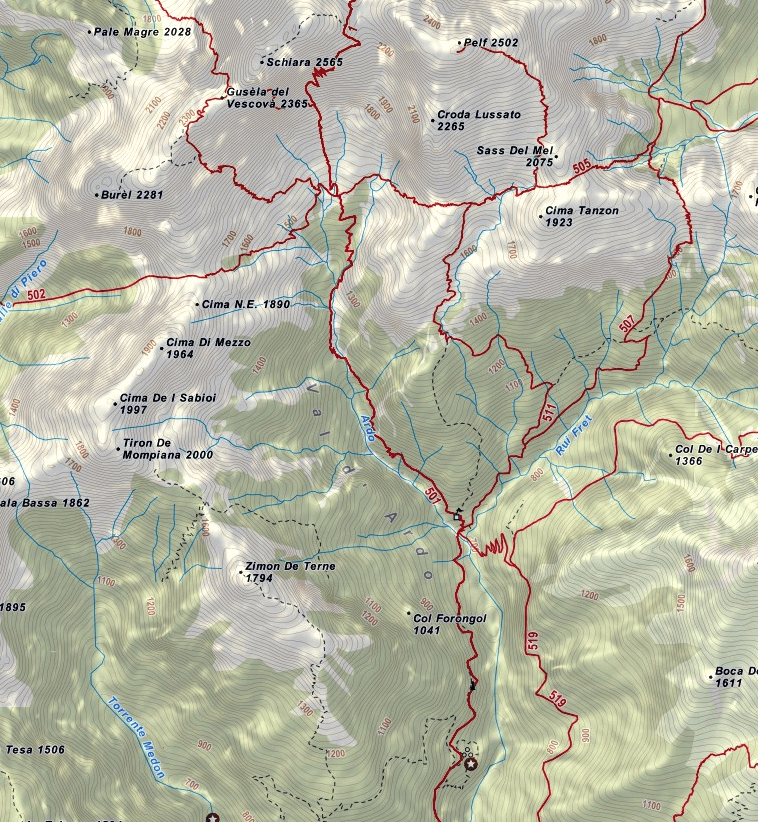 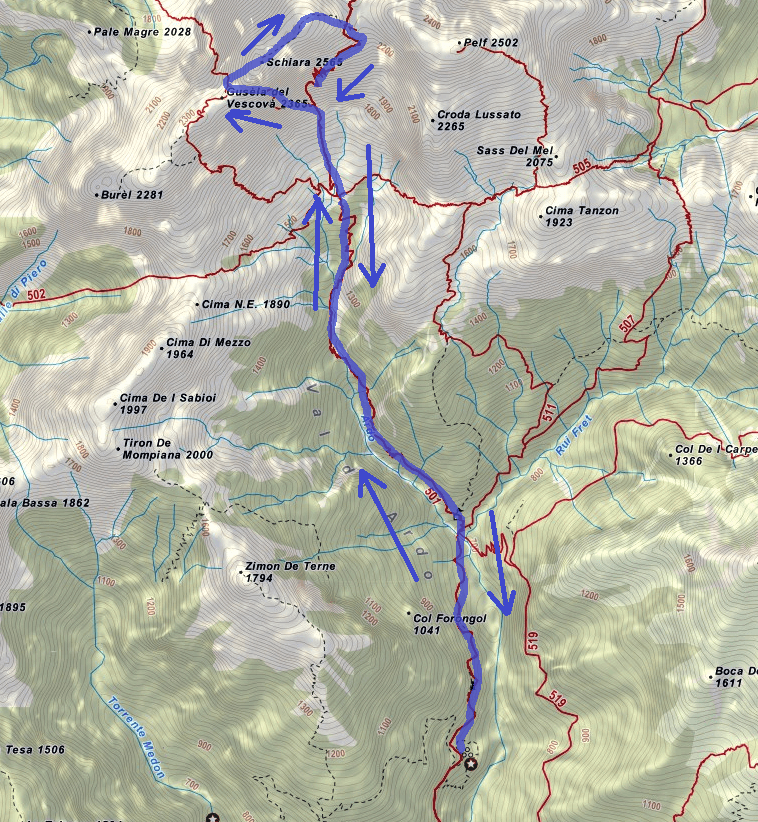 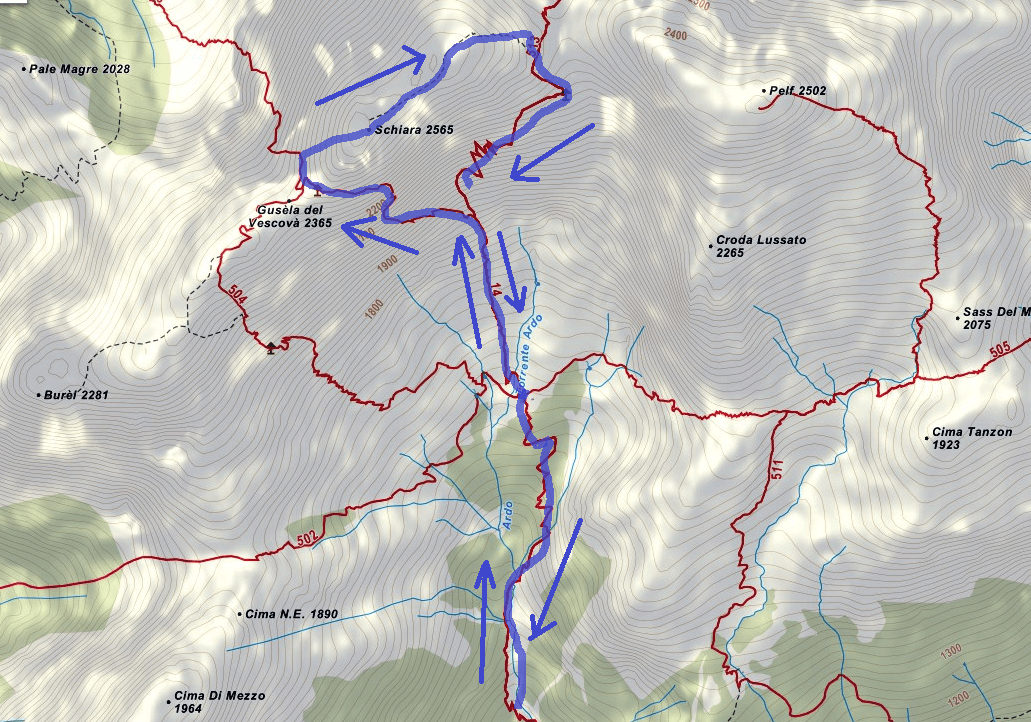 Images Ferrata Berti at the Schiara. The images included in the report were sent to us by the users of the site. If you are interested in sending us photos, use the form on the left or send them to our Facebook page. 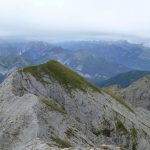 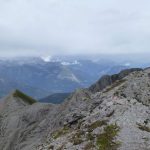 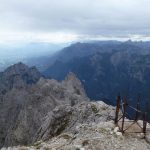 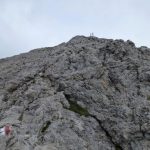 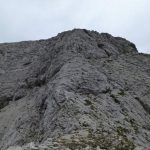 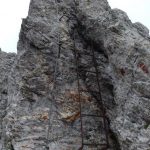 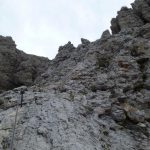 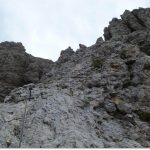 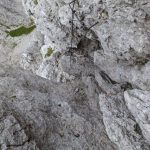 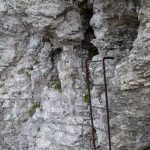 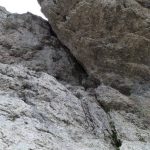 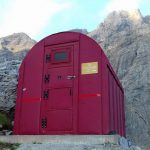 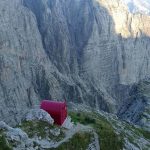 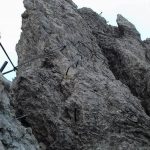 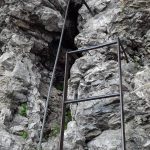 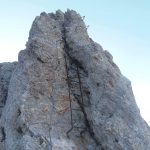 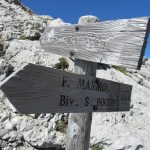 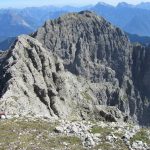 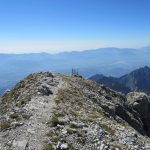 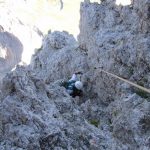 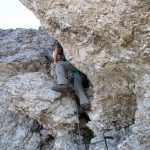 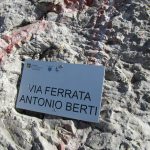 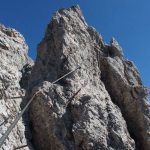