The Ferrata Signora delle Acque (literally "Via Ferrata of Water's Lady") takes place near the village of Ballino with the goal of reaching a panoramic stretch of the beautiful Rio Ruzza waterfall. The Ferrata Signora delle Acque at Rio Ruzza was completed in 2019 and is composed of a first easy section and a more demanding second section where it is necessary to proceed trying to climb some stretches being the cable rather distant. It is an excellent itinerary for families and beginners in the first section while for the second one requires a minimum of experience and ability to climb. It also offers the possibility of crossing two optimally aided suspension bridges.

The starting point of the itinerary is Ballino near the municipality of Fiavè in the province of Trento in the Giudicarie valleys. Once in Ballino from Lake Garda we will have to turn left in the small square of the village and keep the left taking via Ballino. Shortly after we will notice a parking lot. We leave the car there.

From the car park we set off on the paved road that goes west to southwest. We are in fact on the CAI 420 in the direction of the Rio Ruzza waterfalls. When the paved road ends we will soon reach a crossroads where we remain on the CAI path 420 turning right towards the north. We continue until we reach the Rio Ruzza where the signs us lead to the red sign where it begins the Via Ferrata Signora delle Acque at the Rio Ruzza Waterfall (30' from parking place).

The ferrata immediately shows us an aspect that characterizes it: the abundant (perhaps excessive) presence of metal brackets for the climb. In fact the first vertical wall is abundantly assisted by brand new metal equipment. After this first wall we undertake a traverse to the left where we walk on two wire ropes with footboards . At the end of the traverse the cable starts vertical for a few meters. In short we arrive at a suspension bridge very well aided with two ropes for the feet with platforms and two ropes for the hands. The bridge allows us to cross a stretch of the stream between two sections of the impressive waterfall. We follow the equipment and go under a rocky amphitheater below which the main waterfalldescends. Here ends the climb route aided with the Ferrata Ballino to the Rio Ruzza waterfalls (15' from the start).

Now begins the second most challenging and vertical section of the route. This section proceed vertically with the cable sometimes much to the right, forcing you to look for the rock holds (always avilable) to progress. Some passages are overhanging and on the whole it is very exposed. After about a vertical wall aided first with brackets then with a ladder, you reach a second suspended bridge with the singularity of completing a 90 degrees angle on the water jump of the waterfall. This step is full of adrenaline. Climb some rocks and a new wall withdiagonal passages and then vertical reaching a new suspension bridge. You climb another new vertical wall poor in artificial holds where it will be convenient to climb right before reaching the last meters on a earthy groundand the ferrata ends (45' from the beginning - 1h 15' total).

You follow the path leading back to the base of the waterfall and then back to the same path to the car (30' from the end of the via ferrata - 1h 45' total).

The environment in which the Ballino ferrata takes place is wonderful with the waterfall next to us climbing. The equipment is new and in excellent condition. Attention to the second suspension bridge which has the high safety rope rather far from the feet. For people who are not very tall, an extension cord will be required or the carabiners can be hooked onto the side ropes.

This short, aided itinerary was built to enhance and attract people near the beautiful Rio Ruzza waterfall. The area is full of easy itineraries (Aided Path of Cavre, Via Ferrata Colodri or Via Ferrata Rio Sallagoni), many of medium difficulty (Ferrata Artpinista at Preore or Via Ferrata Che Guevara). The area offers many opportunities for aided routes and leaves the hiker spoiled for choice. If we wanted to increase in a significant degree of difficulty, we can reach the Via Ferrata Pisetta or the Via Ferrata Segata at Bondone.

Traccia GPS per Ferrata Signora delle Acque. Itinerary: as per description above. 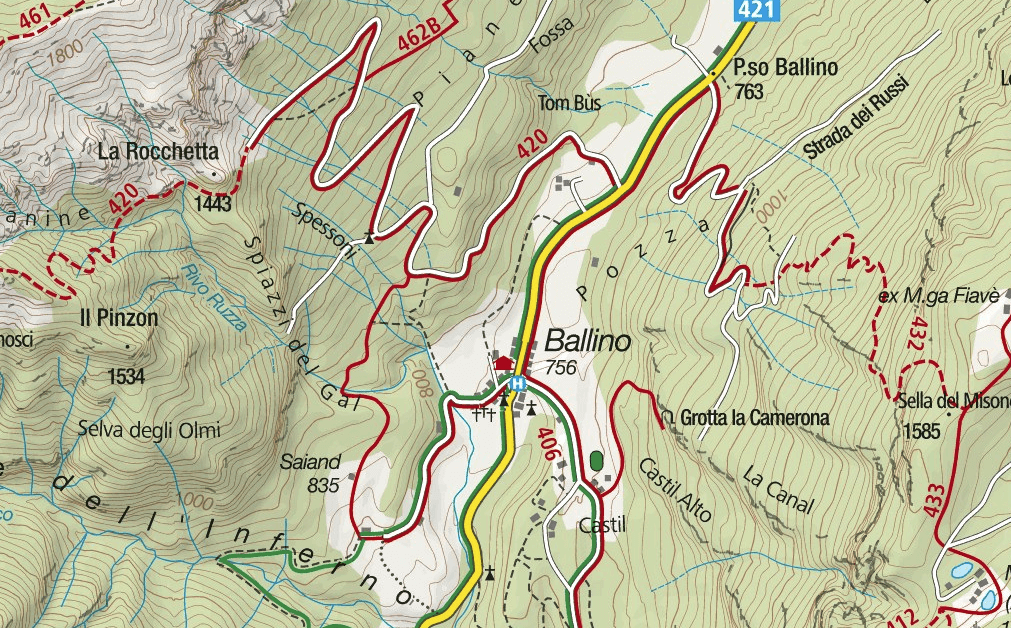 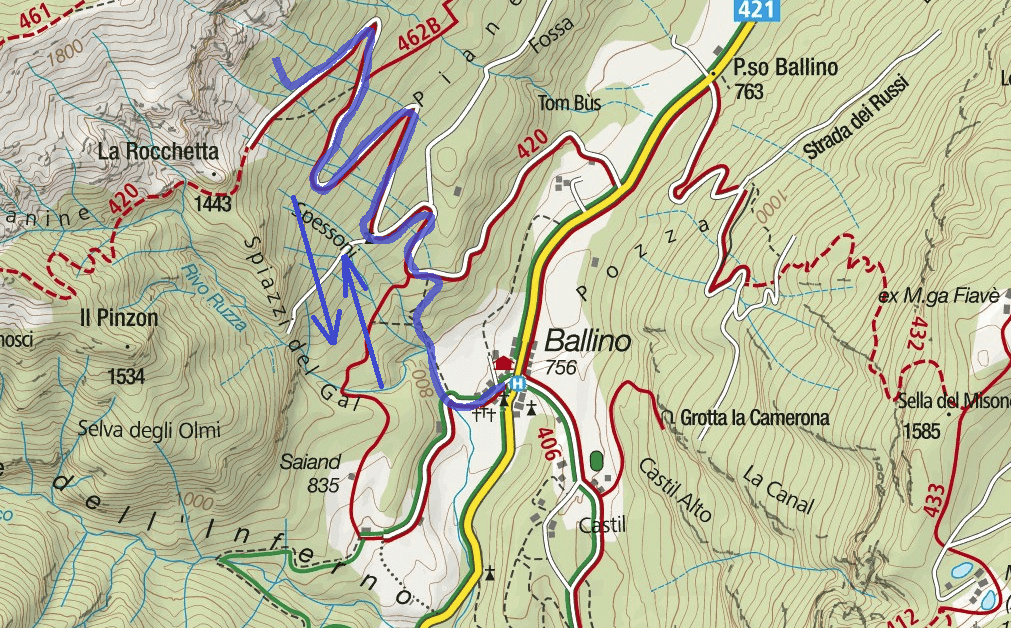 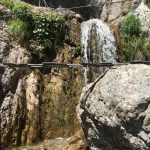 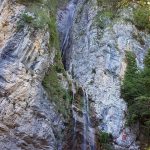 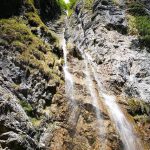 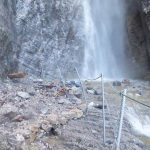 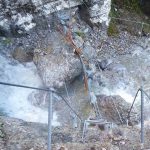 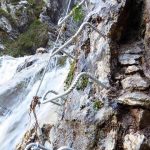 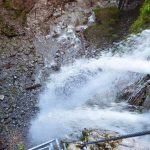 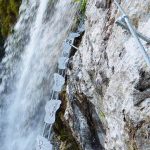 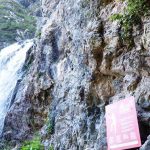 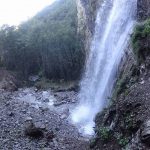 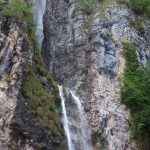 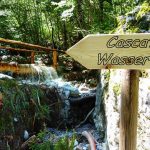 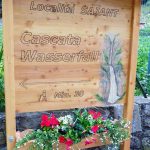 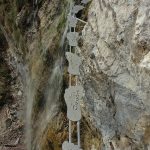 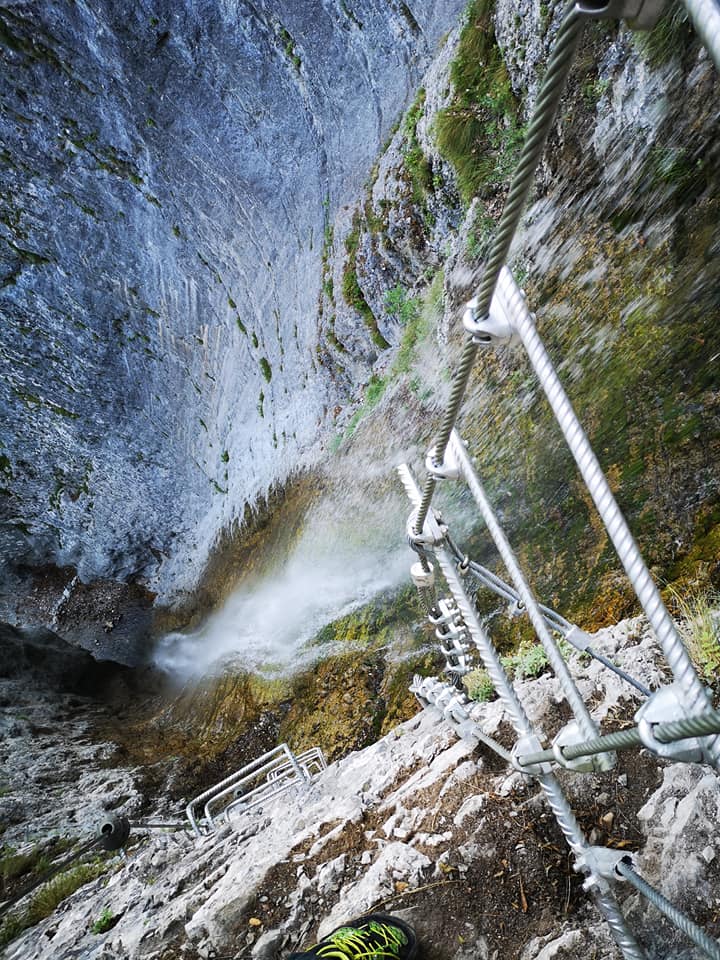 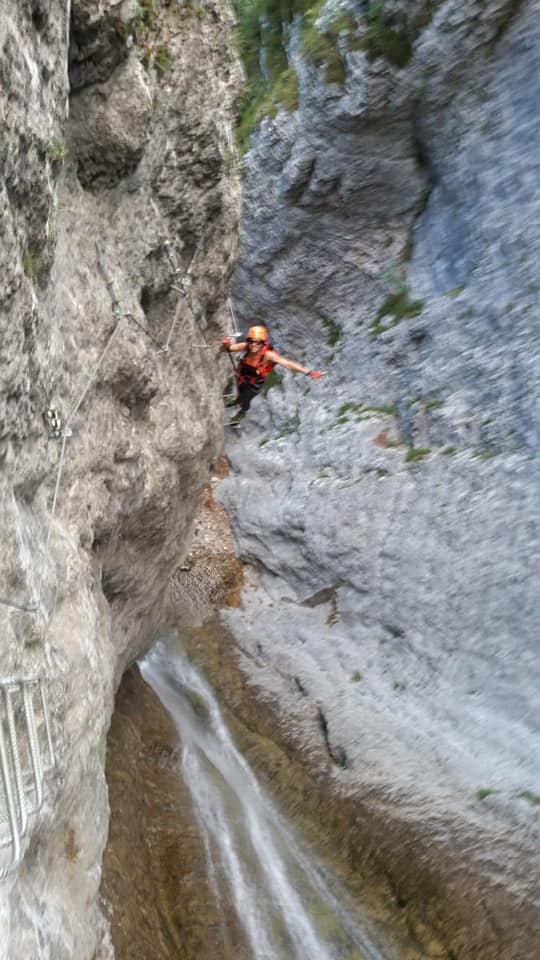 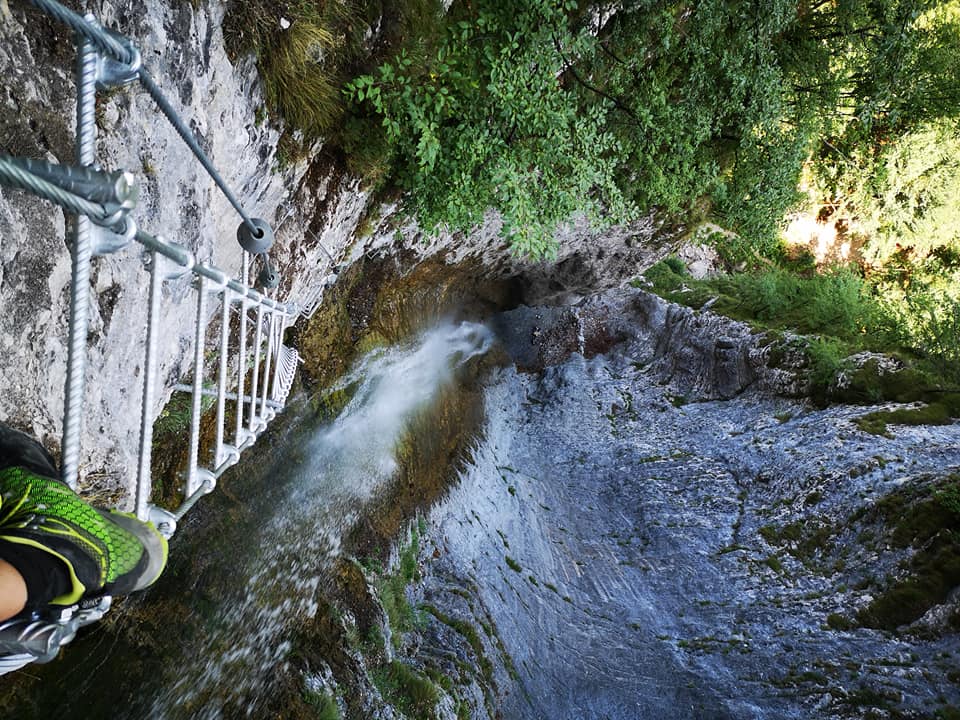 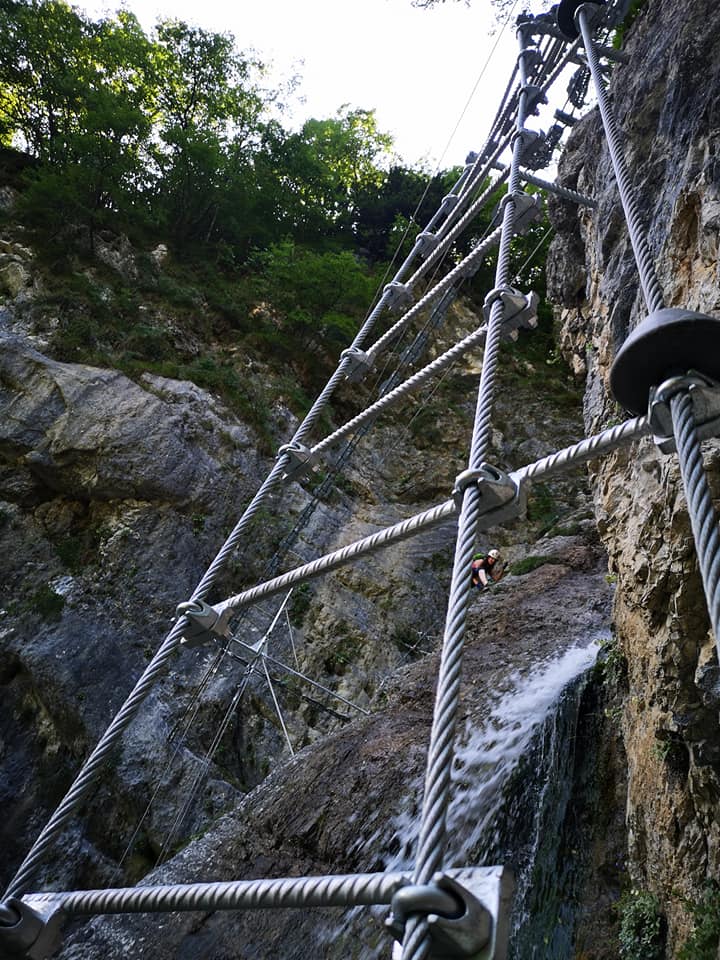 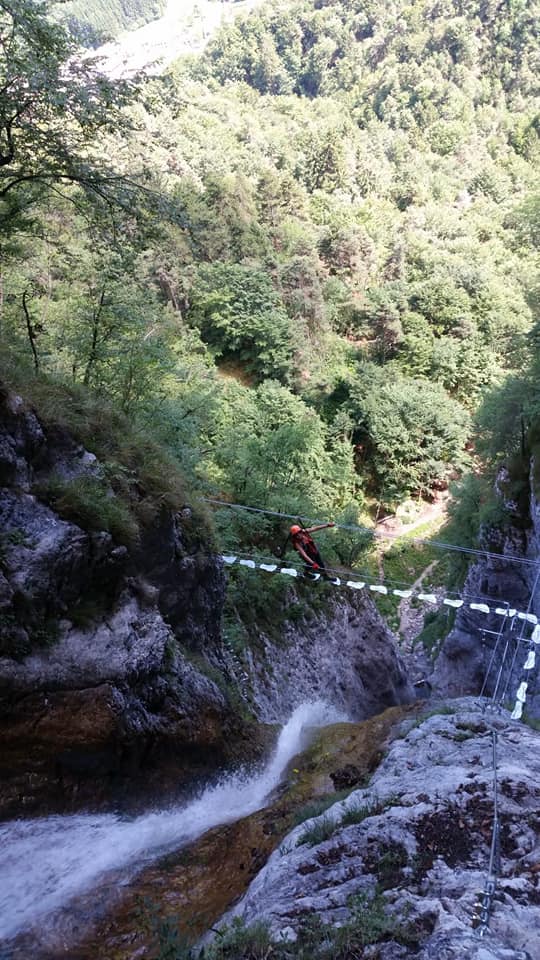 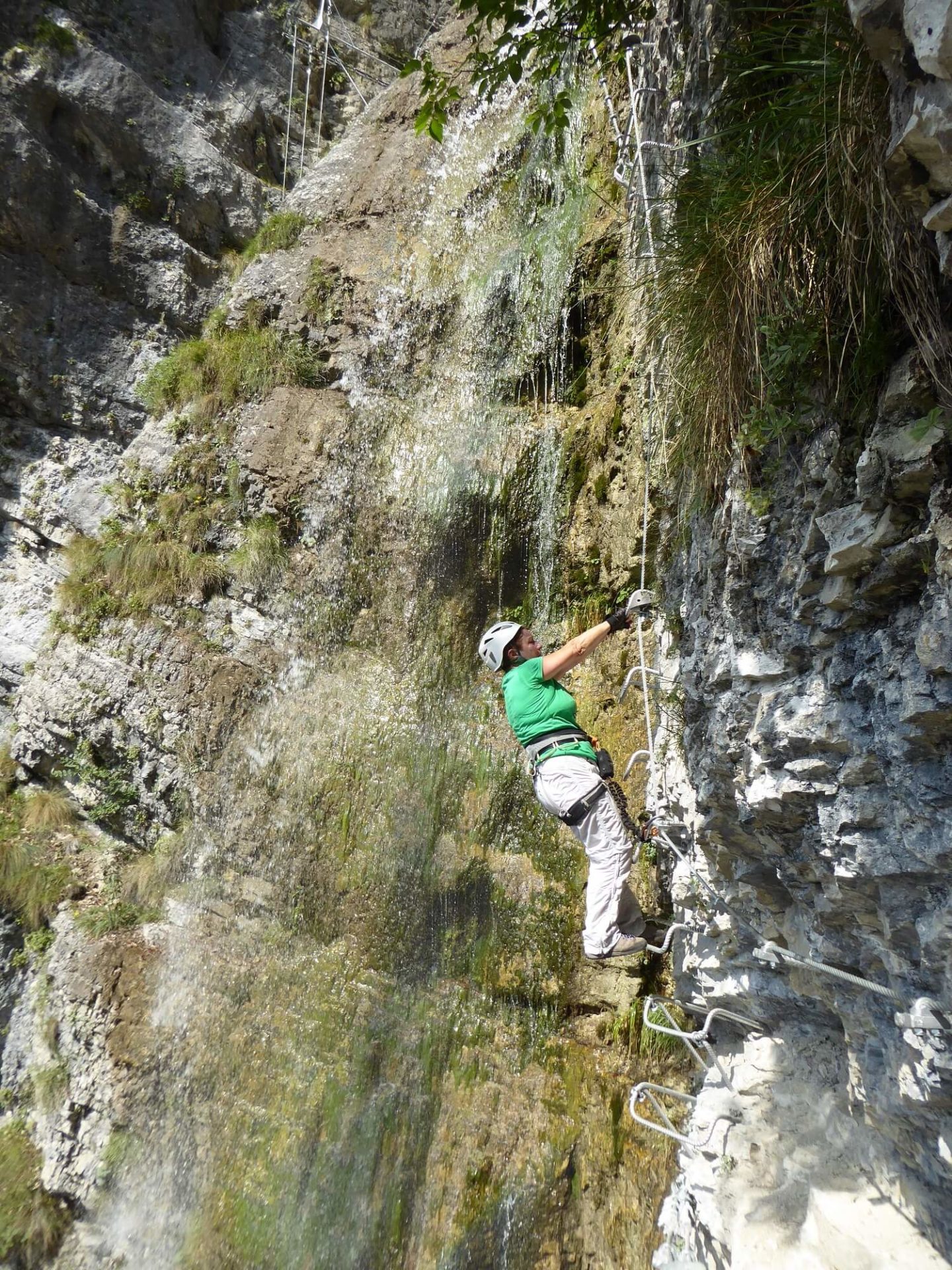 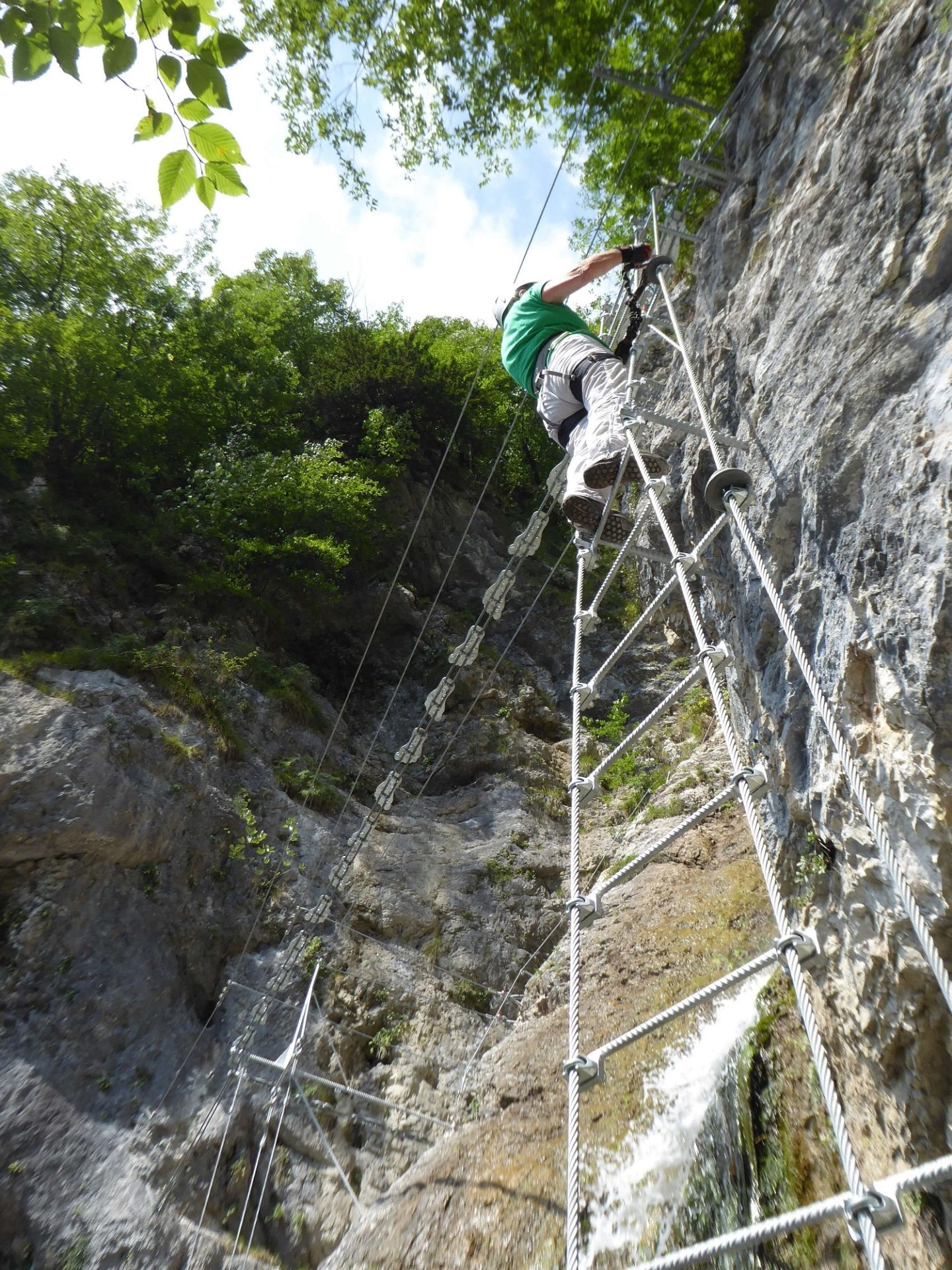