The long-standing Ferrata Bepo de Medil is a little-used ferrata with little maintenance. It goes up a narrow gorge that leads from the Vajolet Valley to the Pala di Mesdì and then to the Valle del Larsec. The itinerary is for experienced hikers and requires absence of dizziness both in the aided sections and in the upper part of the route. The views from the summit are stupendous on the Catinaccio and the other main Dolomite groups of the Val di Fassa.

The starting point of the itinerary is the Gardeccia Hut in the Val del Vajolet, valley parallel to the Val di Fassa (Trento) but forbidden to private traffic.

Reached the Rifigio Gardeccia (1949 m) you have two options to reach the gorge where the Ferrata Bepo de Medil extends:

From that pole there is a path heading north-east in the direction of the bastions. This path is not marked in the pole and - at the time of the visit - it seemed obstructed by a stone wall to indicate its closure. From this point marked by some sporadic red marks the Ferrata Bepo de Medil begins.

After the pole, always follow an uphill stretch of path that goes around a rocky edge and presents us with a gorge where the Ferrata Bepo de Medil extends. The initial part of this gorge is wide but collapsed. The track that we followed uphill is not present and we need a lot of attention to climb up the landslide, which is definitely unstable. We climb not without troubles but gaining quickly altitude. After the most unstable part of the landslide we will notice some dated red signs that indicate that we are entering a narrow gorge where we soon meet wire ropes which initially run along the right side. You continue uphill up to a more difficult passage than the other aided sections. A big boulder blocks the way and we will have to go up a leap of a couple of meters. This stretch also presents us with the only bracket of the route, however, placed uncomfortably on the left side. This trait will need to be traced back with a bit of agility and strength. We continue uphill always inside the narrow gorge without any particular technical difficulties up to the end of the crack near a vertical dihedral but rich in handholds.

We go out of the gorge (30 'from the start - 1h 45' total) and we find ourselves a barren landscape in front of us. We will have to follow one slight trace on a detrital bottom that goes north-east towards the Pala di Mesdì. Here we will have to pay attention to two unprotected passages worthy of note: a passage asks us to go down in a not very stable carving and then go up again on the opposite slope paying a lot of attention to the debris bottom, and a stretch of exposed ridge.

We will arrive at a saddle (20 'from the end of the via ferrata - about 2h total) where we will have two options:

For the return we will first of all have to go down the saddle from east to the valley of the Larsec. This descent takes place by track on a fairly unstable debris bottom and above all in the central part it could be useful to use hiking sticks to maintain balance. Reached the valley of the Larsec we will notice a more marked track that cuts through the valley and here we will have two options:

Several notes on this trip are useful. The first is linked to the state of the path. The path is substantially closed, having removed all indications to reach it and in fact erected a small stone wall to indicate this state. In practical terms, however, it can be covered. It must be borne in mind that the state of the metal equipment present is of a psychological support but they are dated and in many points that are so loose that they may not be useful in the event of an actual fall. The gorge where the aided stretch extends is unstable, as evidenced by the collapsed sections to be climbed, and this must raise the level of attention. Absolutely necessary the helmet considering these premises. Last aspect related to the aided part, you can find snow even in late season.

Leaving the gorge where the aided sections develop, follow a path at high altitude where it is necessary to follow the trail given the scarcity of signs present. An unprotected passage near a collapsed gully is probably the most exposed and dangerous of the trip. It requires a firm step and an absolute lack of vertigo.

With these aspects to advise against the choice, it must be said that the path extends in one of the few corners of the Catinaccio little frequented e the view from the top of the route is of absolute value on the whole group and on the other surrounding peaks.

The Ferrata Bepo de Medil extends in one of the most austere but at the same time fascinating environments of the Catinaccio group. It can also be walked downhill by paying even more attention. It can be combined as indicated in relation to the Aided path of the Scalette or from the Pope Pass one could continue in a northerly direction towards the Catinaccio of Antermoia and take his ferrata. Still remaining in the northern part of the Catinaccio you could walk along the Ferrata Laurenzi or the Ferrata Maximilian. In this case it will be necessary to stay overnight in one of the huts present near Lake Antermoia or the Passo di Tires.

Traccia GPS per Ferrata Bepo de Medil. Itinerary: as per description above. 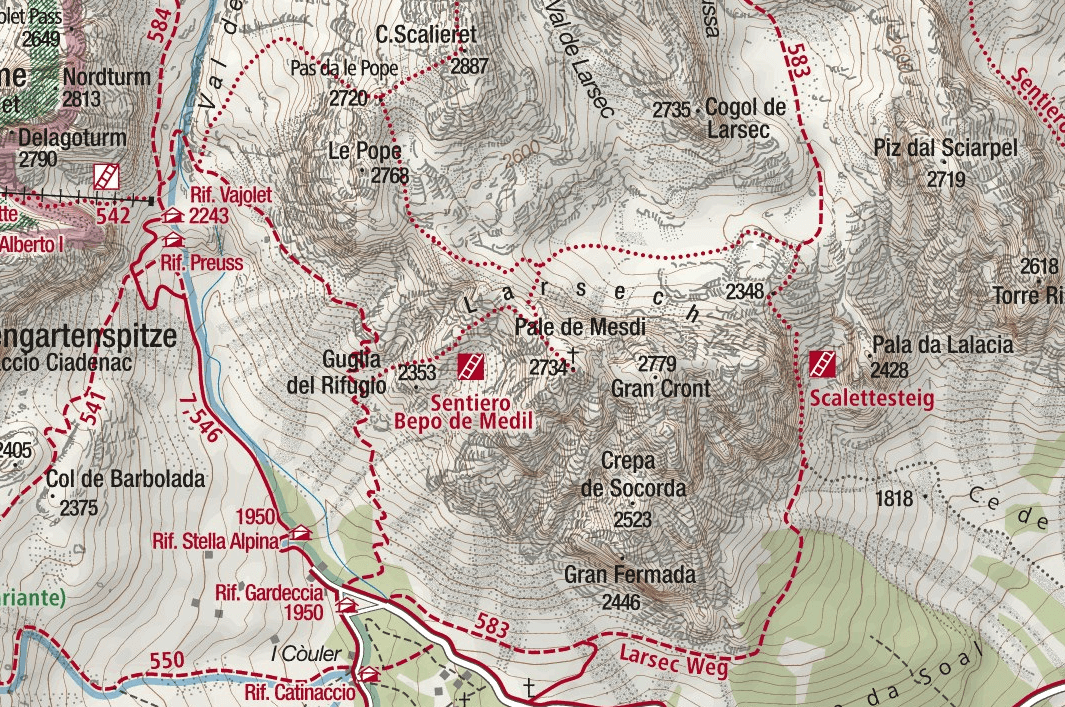 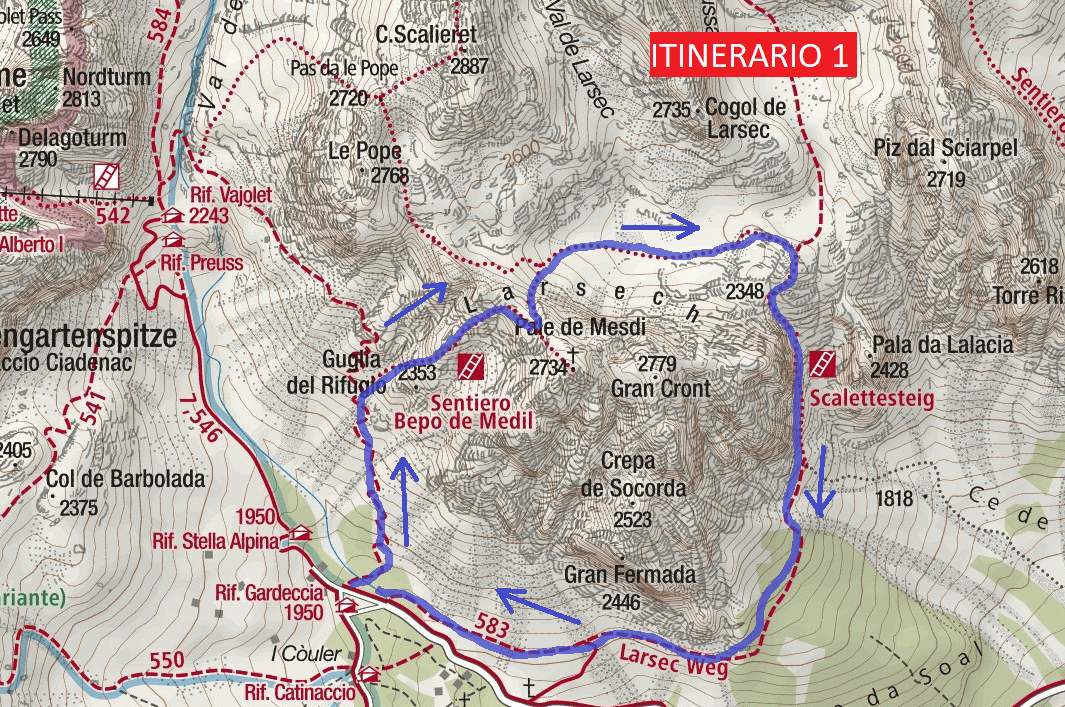 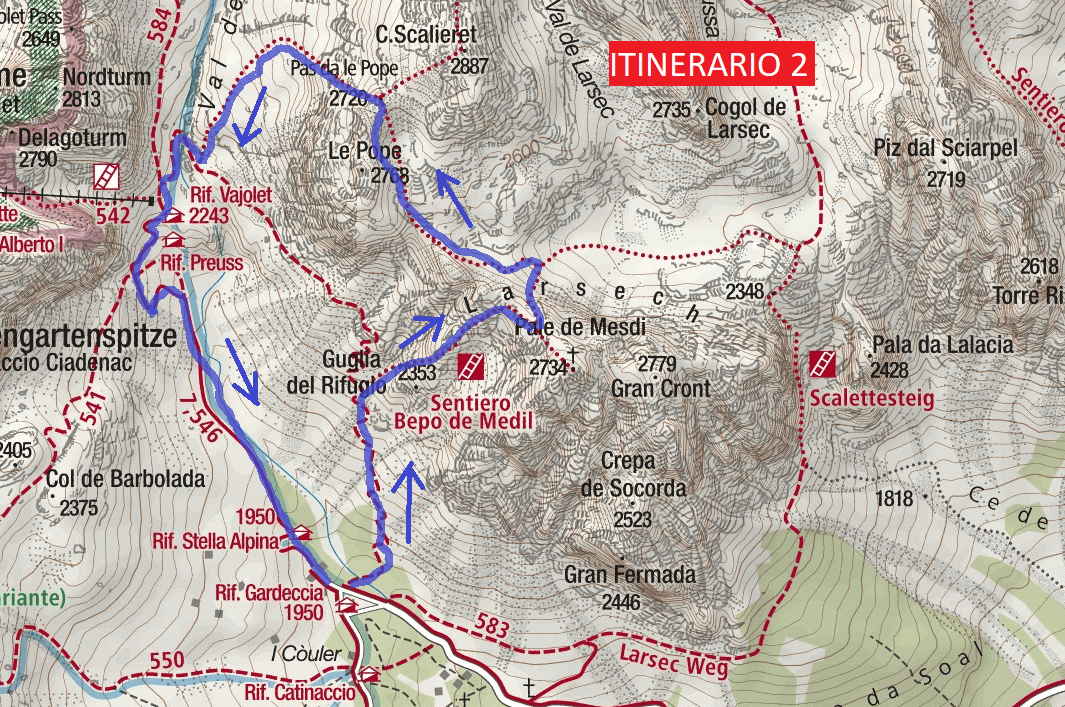 Images Ferrata Bepo de Medil. The images included in the report were sent to us by the users of the site. If you are interested in sending us photos, use the form on the left or send them to our Facebook page. 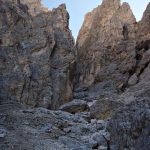 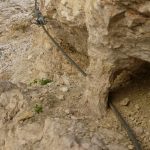 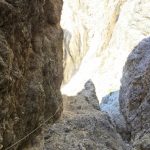 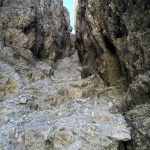 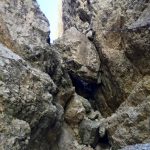 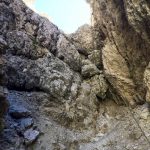 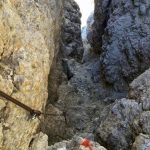 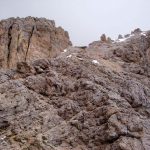 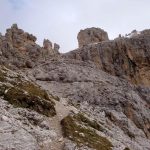 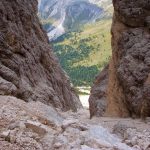 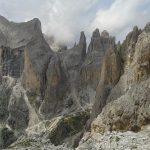