Via Ferrata of Mulaz

Review of the brief Ferrata del Canalino leading to the Mulaz Pass in the dolomitic group of Pale di San Martino. Itinerary beatiful, long and isolated in the norhtern part of this group.

The starting point of the itinerary is the Vales Pass on the border between the provinces of Trento and Belluno. If you come from the Trentino side, you will reach Paneveggio following the pass, while if you climb from the Veneto side you must first reach Falcade di Sopra. Once at the pass you can easily park on the Trentino side and then take the hike on the south-east side of the pass.

We start at the Vales Pass (2031 m). Proceed on the path 751 which initially is a road and then becomes a dirt road although wide with the aim of reaching the Forcella of Venegia (2212 m). Just before reaching the fork we ignore the trail that goes up to the Cima del Lago. When we reach Forcella we keep to the right on trail sign 749 which looses in slope down the hillside. We ignore the deviation to the right with signpost 750 towards Malga Venegia. This stretch of itinerary is very beautiful and pleasant on meadows below the imposing Dolomite walls. We continue to an important junction (2045 m - approx. 1h from the parking lot) where we will keep the left going up the Vallon della Venegiota. The path climbs towards the Passo di Venegiata but we will have to pay attention after about 10 minutes to find a very loose track that comes off the lawn to the right. You need a bit of intuition in the first few meters but you must identify a detrital landslide to focus on; the detrital slide descends from the valley that we will have to ascend. We cut on the meadows and reach the debris-like language that we will have to go up again (we suggest to go back to the meadows to the left of the detrital tongue). Climbing up the debris tongue we cut south on rocky ground and finally we will notice some sign and little man. After a few minutes on the left the Passo del Mulaz will appear at the top of a gully. We climb on the now more evident trail until the gully narrows and the metal equipment appears on the left of the path and with them the detrital landslide so to walk towards south and finally we will notice some signs. After few minutes, the Mulaz Pass will appear up a steep gully on our left. We now hike on more visible trace until it reduces and finally the metal equipment appears on our left meaning thestart of the Ferraz del Mulaz (2390 m - 2h from the parking lot).

We climb on a leaning edge full of natural grips and continue on easy equipped jumps. We reach an edge that we go around on good exposure. Let's continue on one leaning slab where the cable is useful as handrail. We reach then a new easy aided part to climb. We continue now uphill without having to follow the cableway lines that go up to the cable car Passo del Mulaz (2619 m) which we reach after about 40 '(2h 45' total).

At this point we follow the sign 751 with which we will then start the return. We suggest reaching the summit of the obvious Mulaz (ca 1h 15 'a / r). Before descending towards the Refuge we will notice a track that branches off to the left uphill. We climb up to a fork (ca 2800) where we take to the right a debris ledge that goes around Mulaz. Very beautiful and exposed this beautiful stretch of route that leads us finally to the big one summit cross of Mulaz (2906 - 3h 30 'total).

After enjoying the beautiful 360 degree panorama, we take the long way back. The first part takes us back to the junction just below the Passo del Mulaz. From that crossroads we begin the descent that in a few minutes leads to the Rifugio Volpi al Mulaz (2560 m). From the hut we follow to the left the 751 towards the Passo dei Fochet which we reach in about 2h 30 'from the summit of Mulaz (6h total) where some parts are aided with ropes. Now we keep the path 751 to the left that first leads us to the Passo di Venegiota (2303 m) then to the Forcella di Venegia, already reached in the first leg. From the fork back to the approach path up to the Passo di Valles (7h 30 'total).

The Ferrata del Mulaz is rather short and not particularly interesting from the point of view closely linked to the via ferrata. The environment in which it develops, however, is of absolute interest. The northern area of the Pale di San Martino is much less beaten than the southern slope but is rich in landscape cues. The tour is in an isolated environment and the lack of signs leaves a bit of adventure in a very beautiful context (be careful to follow it in case of fog where the orientation would be difficult). The signature is dated as well as the metal equipment is rusted but in a good state overall. The climb to Mulaz requires attention but it is not difficult. Beware of snow that, in some of the gullies and along the climb to Mulaz is easily present even at the beginning of the season. 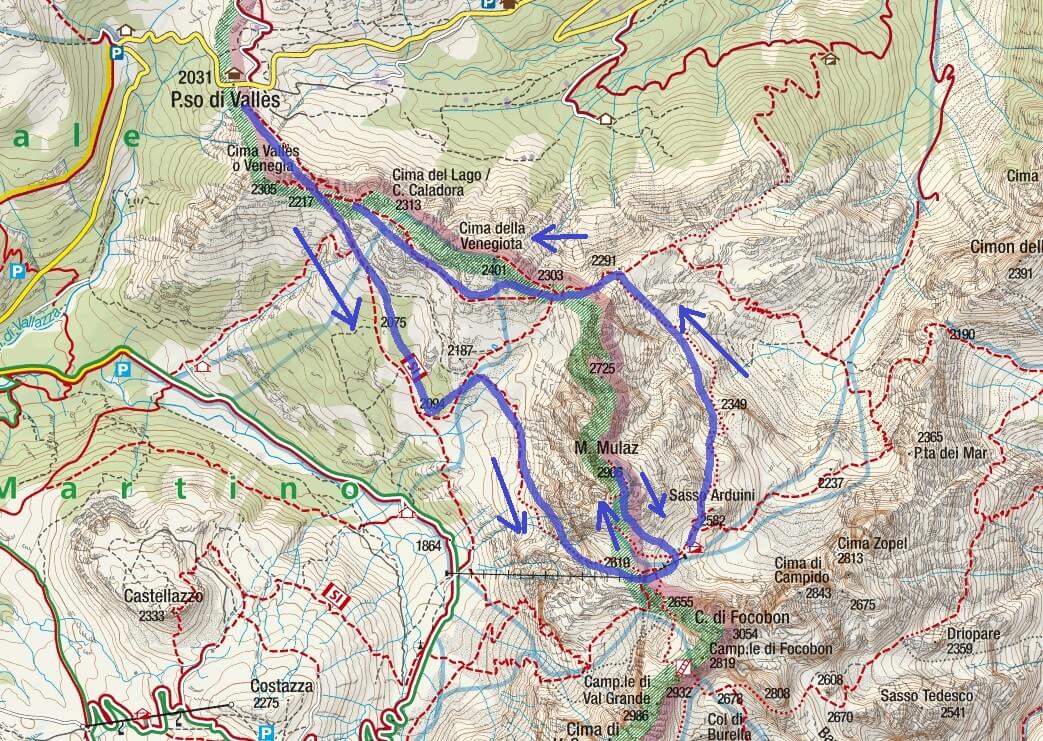 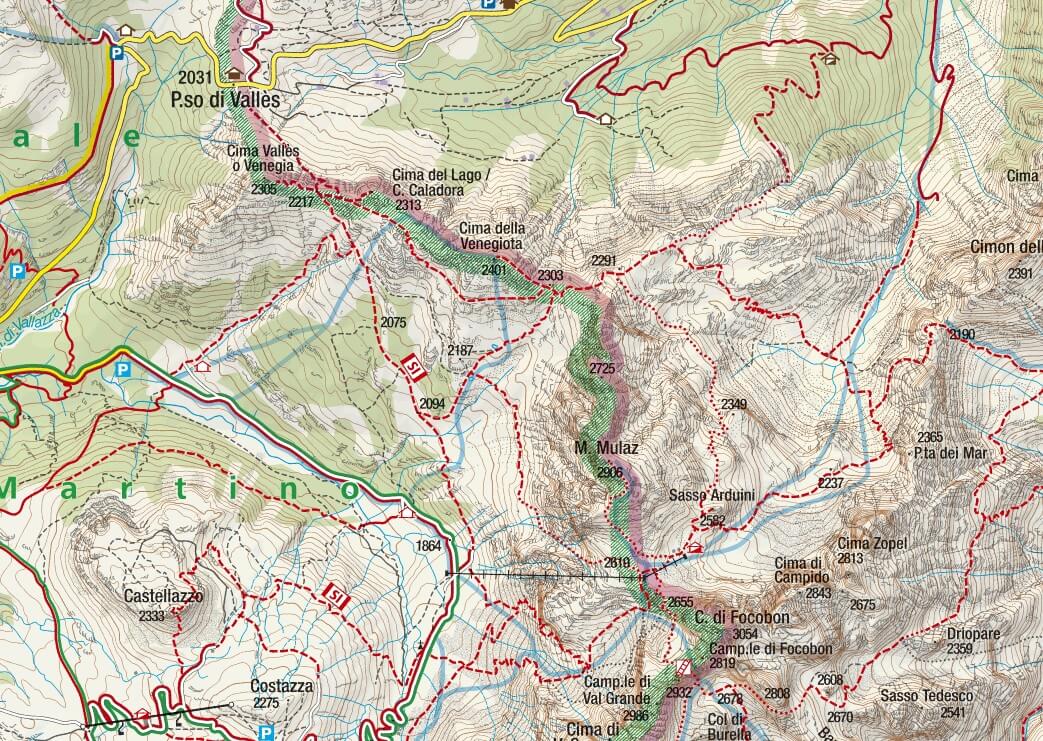 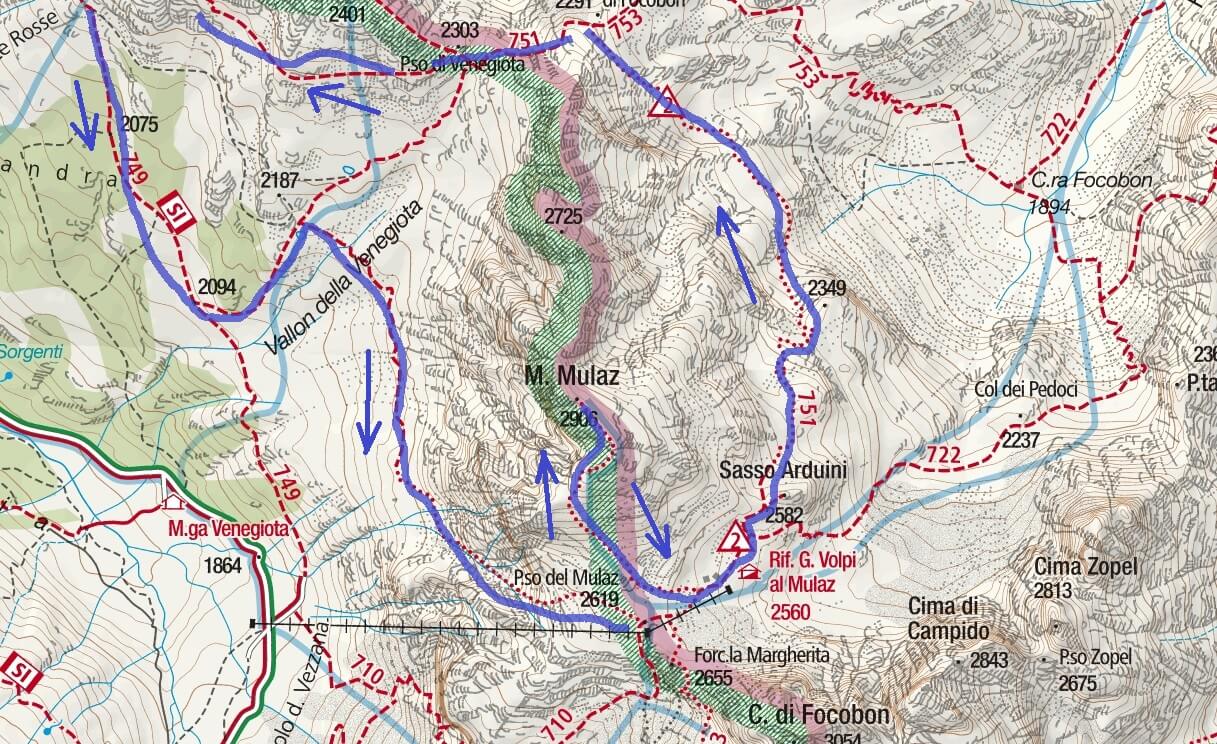 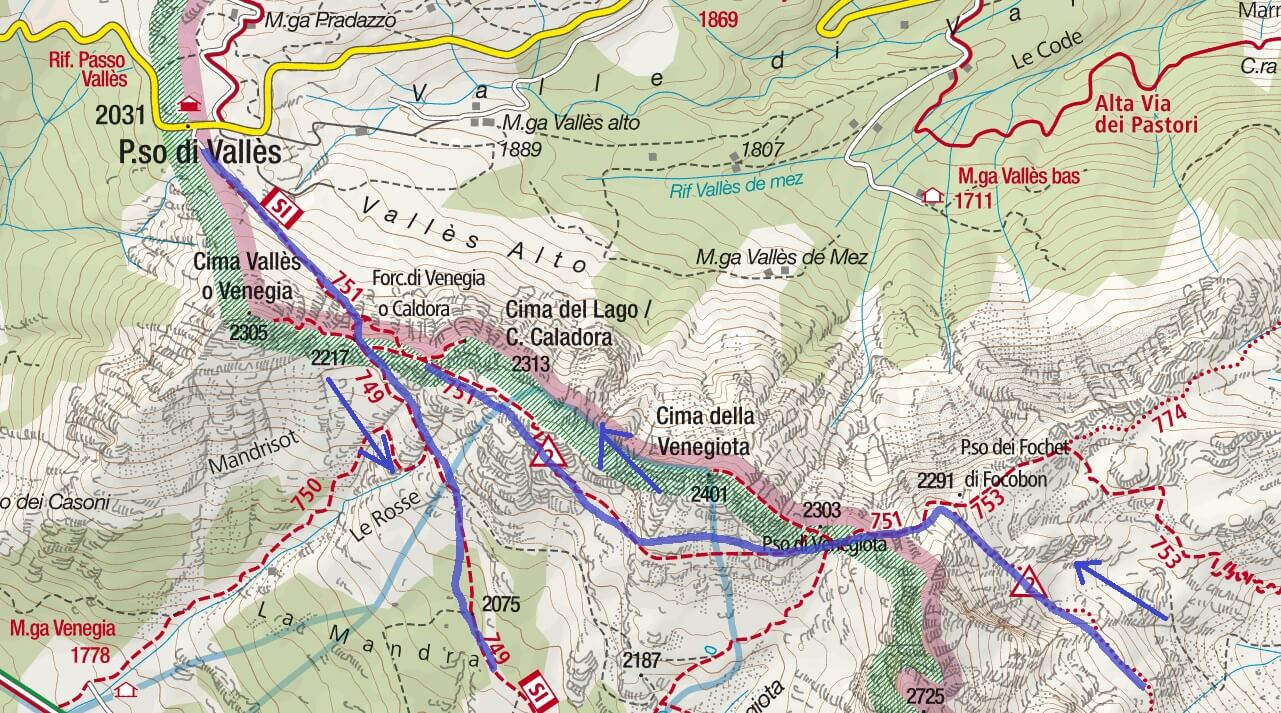 Images Ferrata del Mulaz. The images included in the report were sent to us by the users of the site. If you are interested in sending us photos, use the form on the left or send them to our Facebook page. 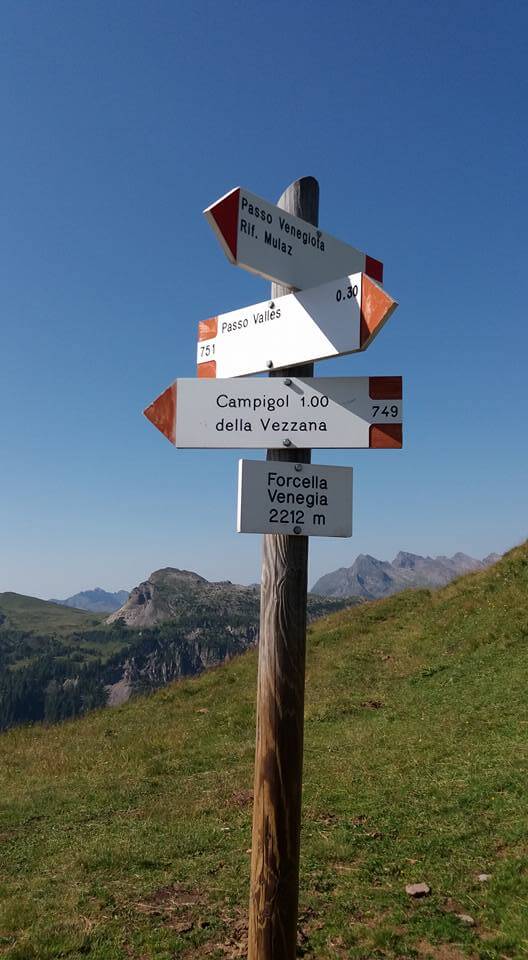 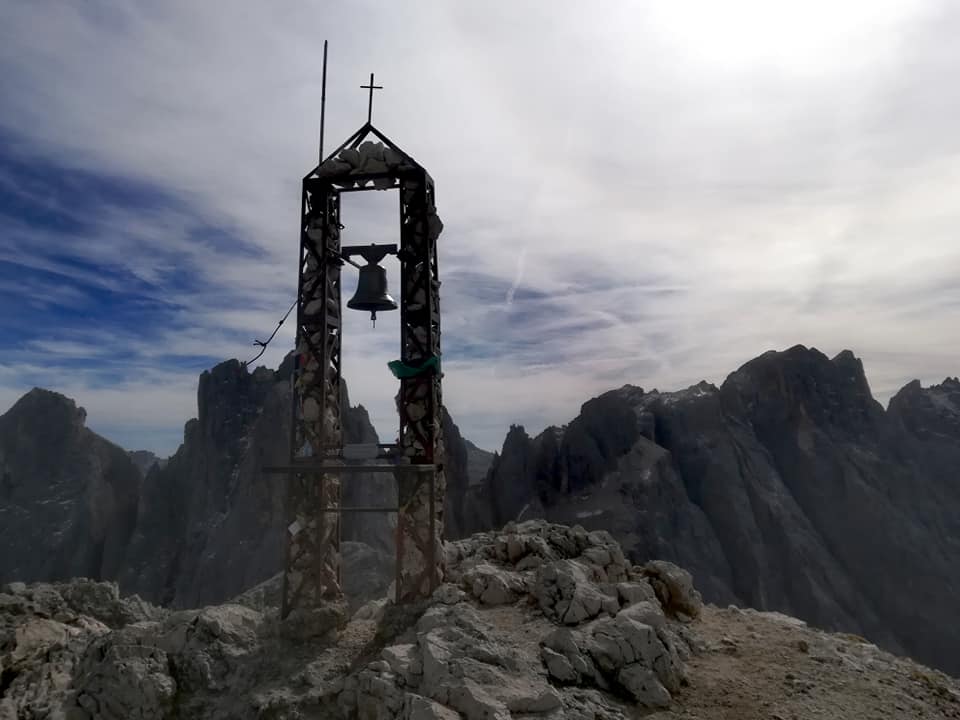 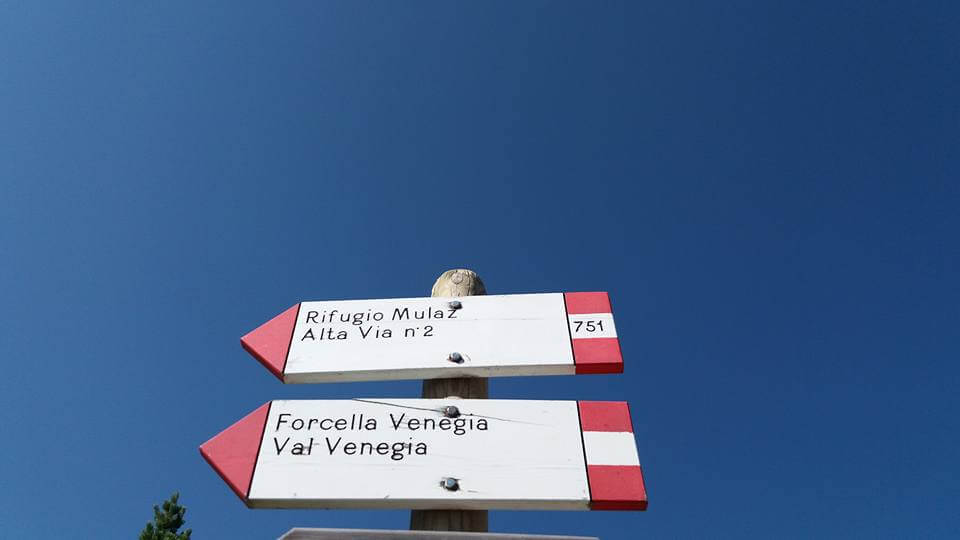 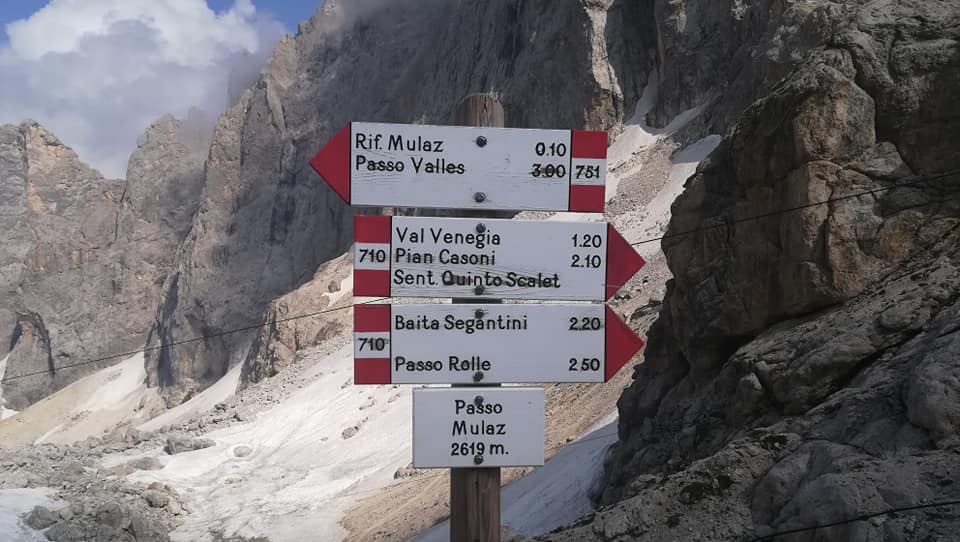 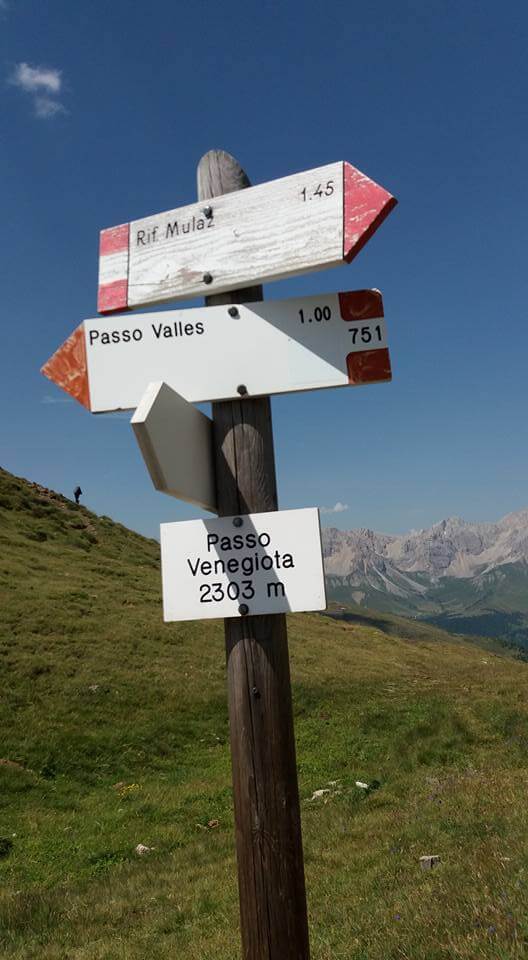 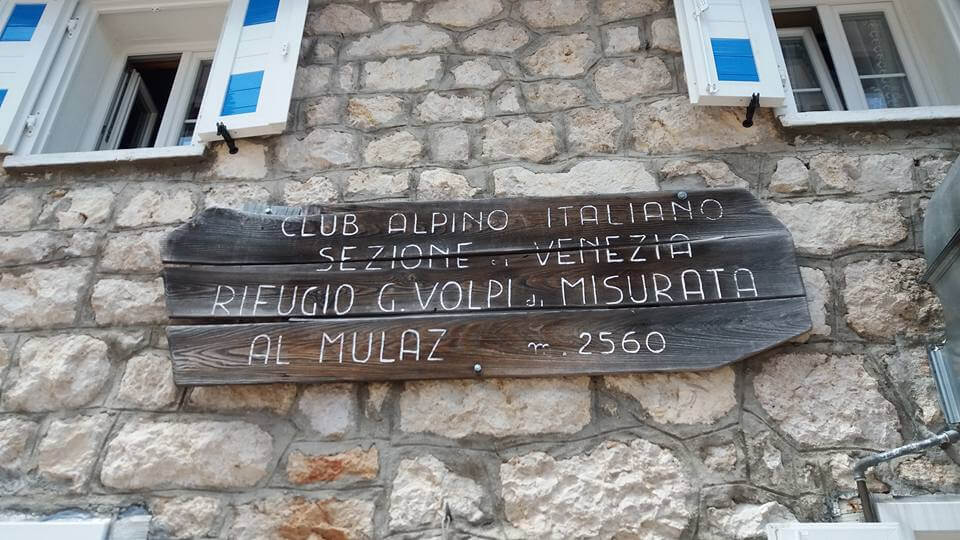 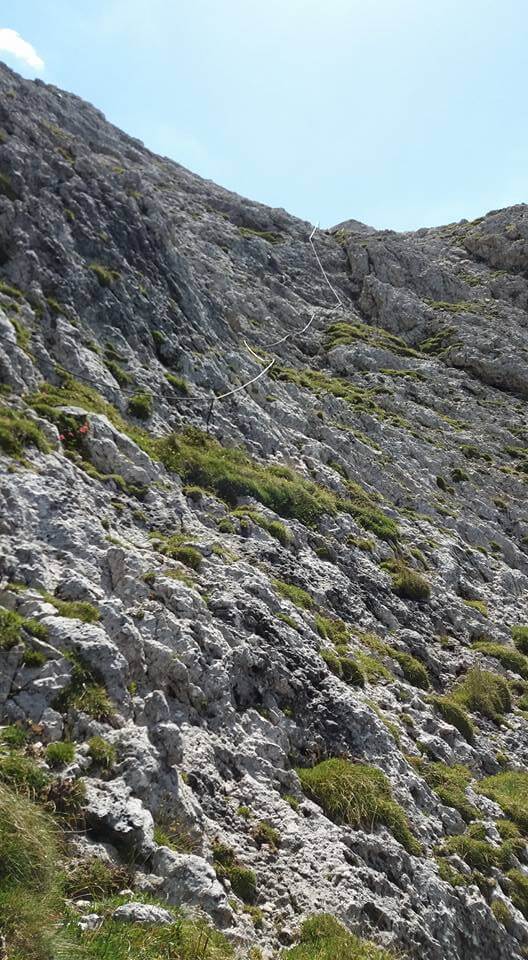 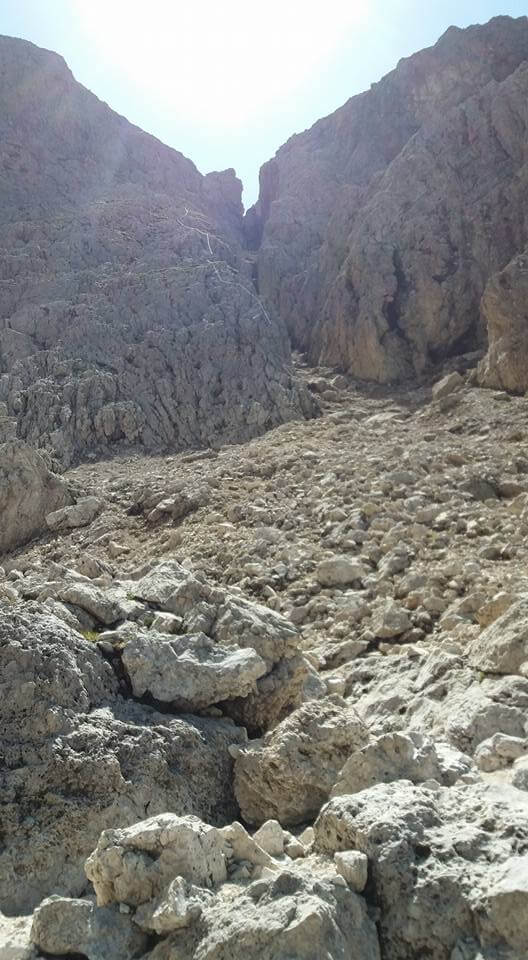