The Ferrata Castiglioni is a high altitude ferrata connecting the XII Apostoli and Agostini huts in the Brenta Dolomites. The itinerary along with the considerable difference in height for the approach and descent is perfect for a multi-day trip. Pay attention to snow even in late season. The view of the southern Brenta Dolomites is stunning.

The starting point of the itinerary is the top station of the cable car from Pinzolo to the Doss del Sabion. Once in Pinzolo from the SS239 from Trento we will see the ski lifts on the right and a large parking lot on the left. We leave the car there and head for the cable car.

This report on the Ferrata Castiglioni will be presented uphill, namely following the itinerary 2 proposed above.

Undergoing the CAI 321 near the Agostini Hut, we continue uphill following the white-red signs and the cairns under the impressive walls of Cima d'Agola. In short we come to the metal slab where the Ferrata Castiglioni begins (30 'from the Rifugio Agostini).

The beginning of the Ferrata immediately presents us the main characteristic of this aided itinerary, that is a long one set of metal stairs that help us gain altitude in strong exposure. We climb anotherladder and we come to one ledge on which we pass a curious bridge made of two wooden boards. Let's finish the ledge and we continue on a new ladder. We move slightly to the right and face two staircases the second decidedly more supported. The gully narrows and we pass from the right side to the left side, now close to the Bocca di the Two Teeth. We go up the last two stairs and we come out to the Bocca dei due denti (namely "Two Teeth") (2859 m - 1h 15' from the start) from which a wonderful vision opens up on the Presanella massif in front of us.

We go down along the valley crossing some snowfields and then some easy aided sections with rocks leaving the Bocca dei Due Denti behind us. We will also have to face a couple of downhill stretches (I degree) free climbing but they do not present particular difficulties if faced with a dry surface. We continue downhill until we reach Rifugio XII Apostoli (2h 30' from Rifugio Agostini - 7h total).

From Rifugio XII Apostoli we will have to return to Pinzolo for the Aided path of the Scala Santa route to the outward journey (2h - ca 9h total). It is clear that for an itinerary of this length it may be convenient to sleep in one of the huts in the area, especially taking into account the opening times of the ski lifts and return to Pinzolo.

The Ferrata Castiglioni is an exposed ferrata that climbs an impressive rocky bastion, however the technical difficulties are limited given the abundant use of stairs. From some points of view it could also be considered repetitive due to the continuous succession of ladders. With this premise, the environment in which it extends is wonderful and the view from the Bocca dei Due Denti is magnificent.

An expectation that surely must be taken into consideration is the snow that we will meet at high altitude. It is certainly prudent to hear the various shelters for information and to have the glacier equipment with them. In particular, if you follow route 2 which involves passing the Aided path of the Ideal, you will pass perennial snowfields.

The two proposed itineraries are only 2 among the various options that can be followed. The Brenta Dolomites are an intricate network of beautiful trails and depending on the time available (and the skills) they can be chained together in many options.

If the goal is a long trip of several days, from the Agostini Hut you could opt to take an trip in the direction of the Pedrotti Hut from which countless trips depart. To reach the Rifugio Pedrotti from Agostini you can opt for the Via Ferrata Brentari or for the easiest Aided path Apolloni. Many interesting trips depart from the Rifugio Pedrotti, among which the Ferrate delle Bocchette Alte and Centrali and the recent Via Ferrata Spellini. 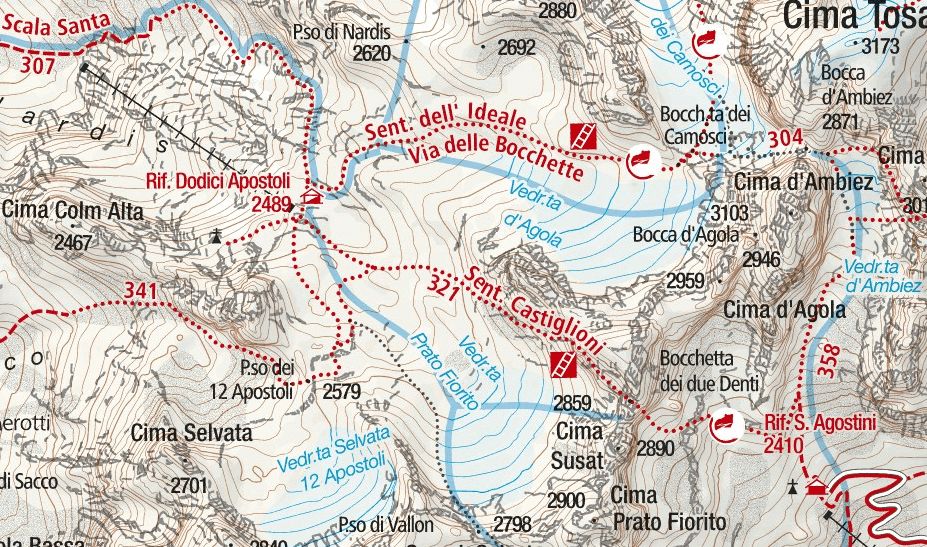 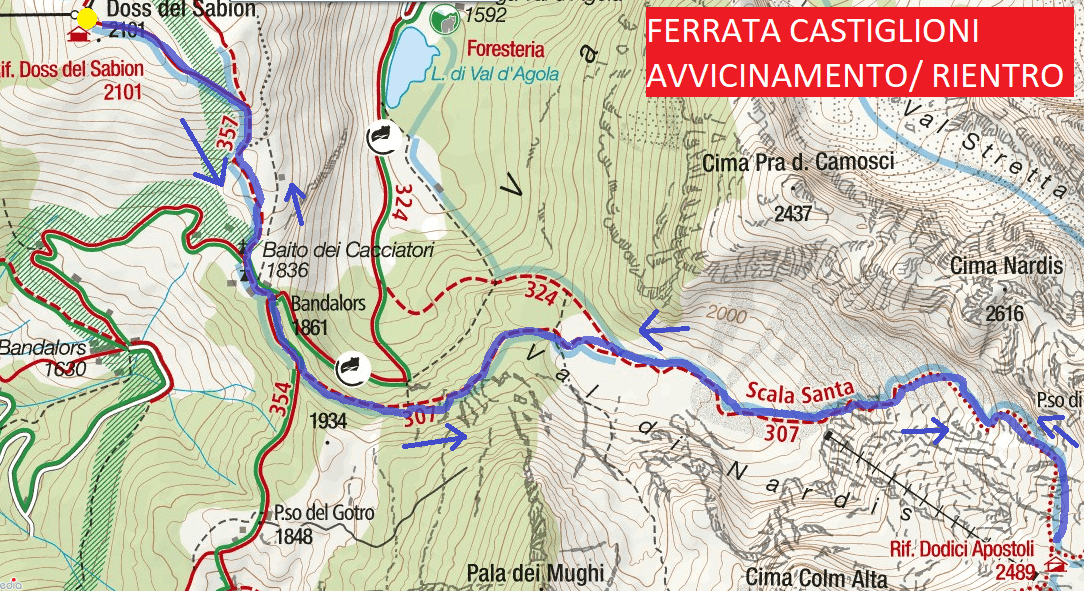 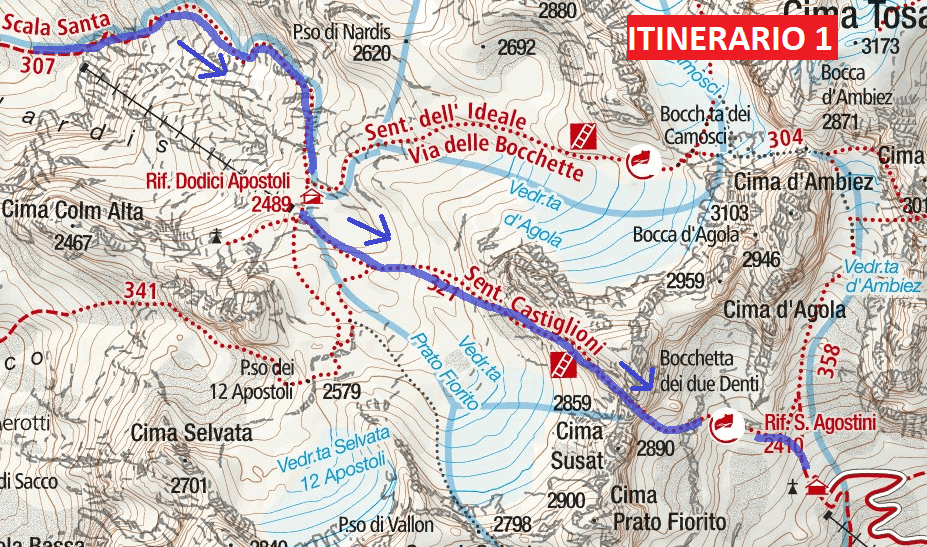 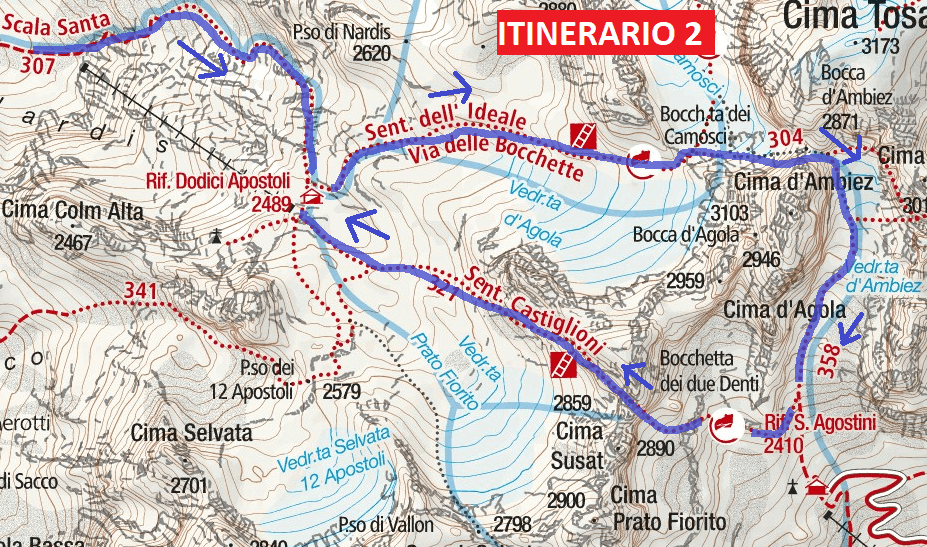 Images Ferrata Castiglioni. The images included in the report were sent to us by the users of the site. If you are interested in sending us photos, use the form on the left or send them to our Facebook page. 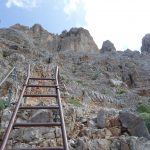 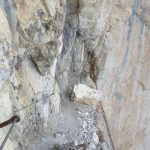 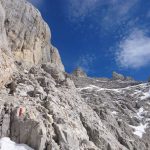 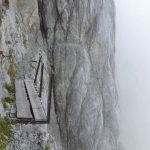 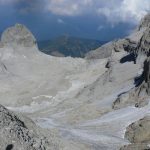 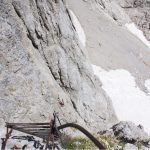 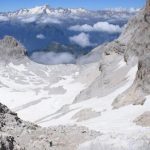 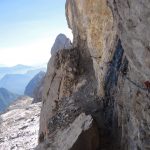 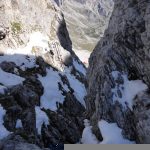 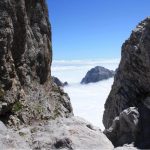 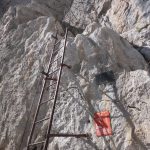 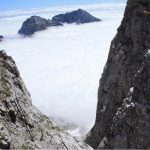 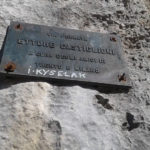 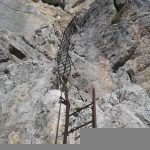 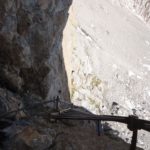 Webcam Ferrata Castiglioni in the locality of Madonna di Campiglio.