Via Ferrata Piazzetta at the Piz Boè

The difficult Ferrata Piazzetta al Piz Boè is one of the most well-known via ferrata in the Dolomites and owes its fame to the magnificent context in which it is inserted and to the difficulties that accompany it. The via ferrata is extremely difficult in the first section to then gradually reduce the level of medium difficulty. The hike is challenging and covers a high altitude. To travel if well trained and prepared on challenging routes.

The starting point of the itinerary is the Pordoi Pass (2239 m) which connects Canazei (Trento) and Arabba (Belluno). Once you reach the pass, park in one of the open spaces. Directions for Google Maps available here.

To reach the starting point of the Ferrata Piazzetta we will have to go along the narrow paved road that runs along the green fields that lead to thePordoi Ossuary (2229m - 20 'from the pass) staying on east side of the Sella Group. I reach theossuary we follow the indications and present signs that with a gradually steeper trail date one gravelly gully which, not without some difficulty, engages us on the CAI 626 that runs along the hillside under the impressive walls of the Sella Group. Reached the CAI 626 we continue to the right under the walls until we meet the metal slab which indicates the start of the via ferrata under one smooth yellowish wall (2630 m - 1h 15 'from the Pordoi Pass).

The beginning of the Cesare Piazzetta Ferrata and the next 30 meters consisting of one slab and a traverse they are extremely difficult. In the context of Italian via ferratas it is certainly one of the most demanding sections due to difficulties related to the rock (particularly smooth), lack of support points and intensity. For this first stretch the via ferrata deserves to be considered Extremely Difficult while for the rest of the route it is more correct to rate it Very Difficult.

The first meters are vertical and very challenging immediately selecting who will be able to follow the path. Having climbed the first 8-10 vertical meters the cable turns to the left for an extremely challenging traverse, aerial and difficult. For those who are not particularly fit, a quickdraw or a webbing can be useful. Once the traverse is over you can catch your breath on a small terrace and get ready to walk the rest of the via ferrata.

We cover a short but providential ledge where it is also possible to turn around and notice that we are in the presence of the Marmolada and its glacier. We reach a vertical jump where they are present two strange metal brackets that help us climb the first few meters. Beyond this jump, the climb remains difficult, vertical and on smooth and often greased rock. This will lead us to abundantly use the thick metal cable present. We reach a short ledge to the right and continue vertically again climbing a crack where there are two metal cables - one on each side of the crack - and some small nails. We continue the climb meeting a metal ladder and we continue in a vertical line along a wall that is always smooth until we reach a new traverse to the left. We go around an edge and climb vertically to reach awide sandy ledge where it is definitely recommended to take a breath and turn around to see the view of both walls of the Sella and the surrounding valleys.

We cover the ledge for a few meters until we reach a new challenging point on the road. One must go up a narrow chimney inside a slot. The crack is very narrow and will create problems if you have bulky backpacks. The transition is athletic by nature and the backpack could make it very difficult so it is advisable to tie the backpack to the harness with a return or tape and have the backpack under your feet and being able to pass the fissure unscathed. Go up the crack which goes up a short distance vertically beyond which we go around a rocky shoulder and we come to the suspended bridge (40 'from the start - about 2h total).

Past the bridge it can be affirmed that the difficulties of the itinerary are reducing and it goes down to the difficult level. However, the fatigue accumulated in the first half of the way begins to be felt and it is necessary to maintain a high concentration. We climb a few meters after the bridge and climb some of them much more climbing rocks of those encountered in the first section. We continue without particular difficulties on a ledge to the left until we meet the last difficult stretch of the road. We will have to go up one cross to the left quite free of holds but not of the level of the first section. Let's go up this stretch and begin to walk one ledge to the right with which we circumvent one of the large sarongs that make up the Sella. We must now go back some rocky leaps free of obvious grips, however, not particularly demanding. We go up this stretch until we reach some stretches without cable that do not present particular difficulties. Now a part of the route starts where you are in free - max grade and aided sections alternate. Without lowering the concentration, go up to the end of the aided parts (1h 30 'from the start) in correspondence with a freak of nature: some boulders have become stuck together to form one natural door. We see ourselves right up there Piz Boe which, at first glance does not seem far away, will still require a reasonable effort to be achieved.

We climb on scree of the slabau meeting the CAI 638 uphill from Corvara. We climb some easy rocky jumps and we are on the home straight Capanna Fassa Hut above which is the summit of Piz Boe (3152 m - 45 'from the end of the equipment - 2h 15' from the start - 3h 30 'total).

The descent to the Pordoi Pass takes place along the path 638 which will lead us to Pordoi Saddle. The first meters below the Piz Boè are steep and aided in the most demanding sections. You will notice on the opposite side of the Val di Lasties theslabau of the Mesules where end the Via Ferrata of Mesules. We continue downhill following the red and white signs to reach without particular difficulties Pordoi Saddle (2848 m - 45 'from the Piz Boe - 4h 15' total) where thehomonymous hut. At this point we have two alternatives to return to the Pordoi Pass:

The Ferrata Piazzetta is a very difficult via ferrata with an extremely difficult start. It is to be avoided if you are not training and prepared for a challenging climb. Due to the beauty of the landscape and the climb it is easy to meet many hikers along the way who, unfortunately, are often not prepared and slow down the climb due to the difficulties present. For this reason it is strongly recommended during the high season months to walk it early in the morning or, weather permitting, in the early afternoon so as to avoid the morning traffic jams. The brackets are in good condition and the cable is very thick - although not always very tense.

La Ferrata Piazzetta rises in a majestic and impressive context like the Sella Group. This group includes some of the most fascinating climbing routes in the Dolomites. In increasing order of difficulty we meet the Piz da Lech ferrata and the Via Ferrata of Vallon on the eastern side of the group, the Ferrata Tridentina on the northern one and the Via Ferrata of Mesules on the western side. The climbs are on average challenging due to the height difference and the physical effort required. On the opposite side of the Pordoi Pass there is the Ferrata delle Trincee, very panoramic ferrata with high historical interest. 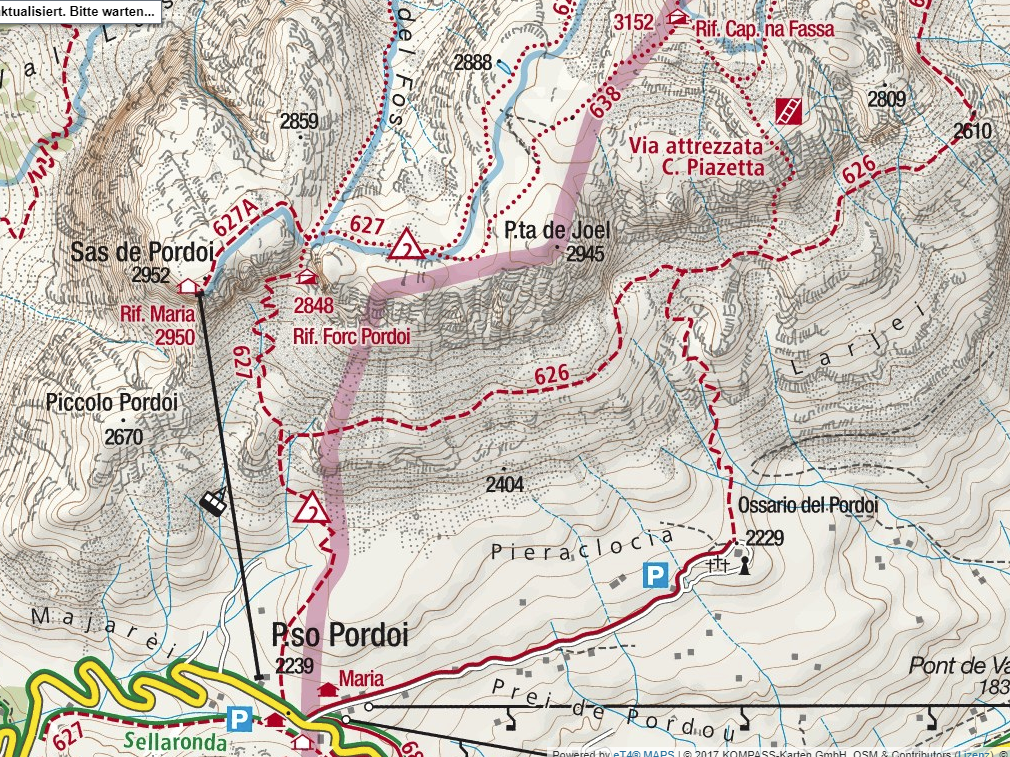 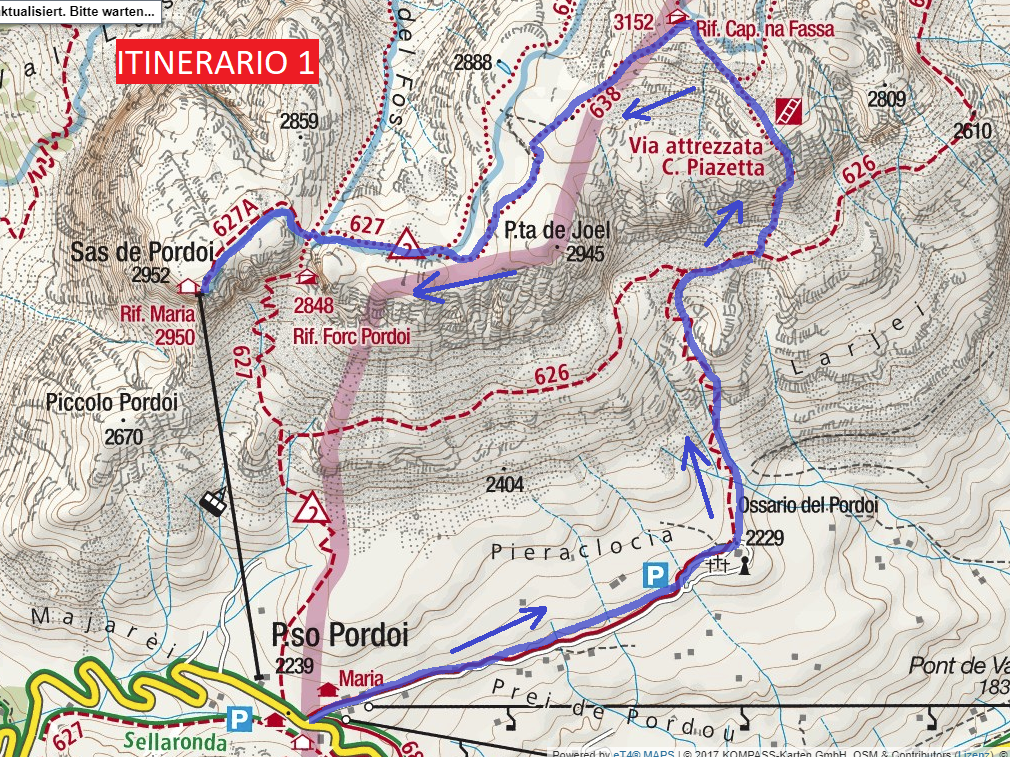 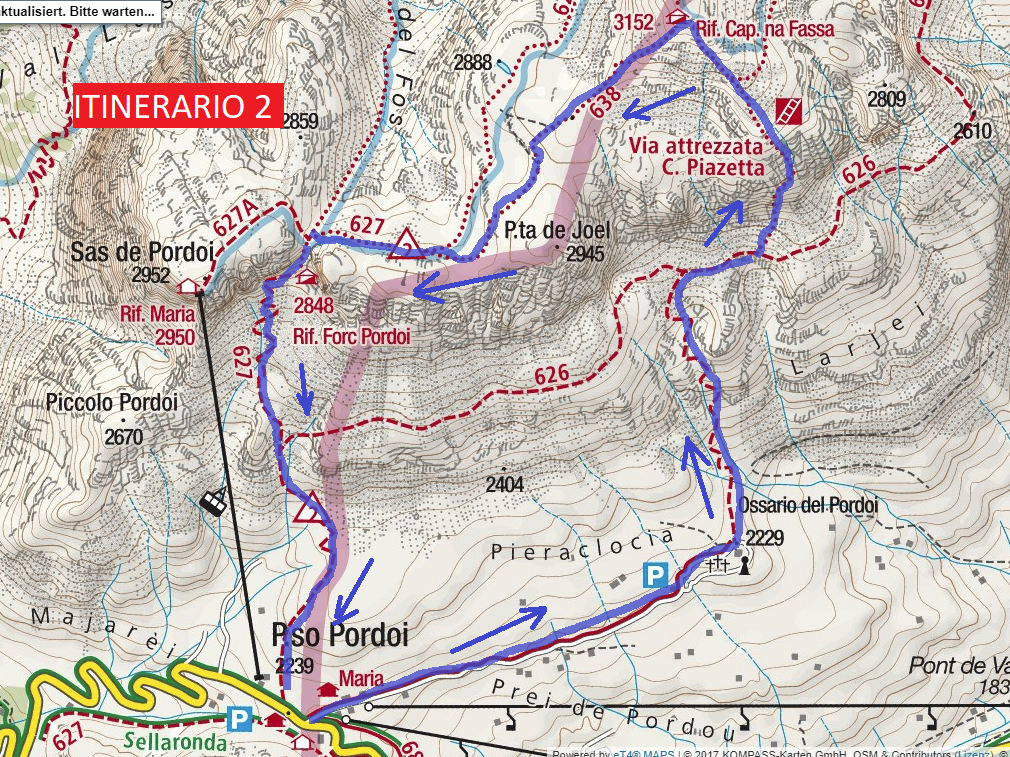