Update July 2019: due to a landslide the Ferrata is currently closed. Call the Crete Seche Hut for updates on the status of the route.

The Ferrata del Crete Seche is a high mountain climbing via ferrata that extends along the border between Italy and Switzerland along a ridge with wonderful views over the Crete Seche and Aroletta glaciers. The ferrata does not present particular technical difficulties, mainly stretching out horizontally for exposed traverses and ledges immersed in a severe and wild environment.

The starting point is the village of Ruz di Bionaz (1696 m). To reach this town in Valpelline, go up the valley from Aosta, just before Bionaz, at Dzovenno go up the road to the left for Ruz. Attention to the signal, it is not the classic blue signal with the name in white, but indicates only a left turn and with small black writing on a white sign is indicated Ruz. The larger sign indicates Crete Seche. Directions for Google Maps available here.

From Ruz we start on a dirt road passing by a building with a fountain, we cross the village and take path 2 in the direction of the Crete Seche hut, going up the valley cutting the various bends along the wood and crossing the Comba di Vertosan stream. The signs for Alta Via 3 are kept until you reach the hut (2410 m - 2h 30h from the parking lot). Overnight at the hut could be convenient to break the trip in two, otherwise very long and with a high altitude. Above the Crete Seche Hut you can see the Sparato Shelter set among the rocks.

From the hut, continue uphill along path 2 between stones and grass, avoiding a snowfield, in the direction of the Spartaro Shelter (2600 m - 45' from the hut - 3h 15' from the car park). We proceed initially uphill along the orographic left of the stream following omit until we reach some messengers with which we wade. Continue uphill along the gully. You reach a snowfield to cross and climb up again, among rubble, rocks and hairpin bends up to the Colle di Crete Seche (2899 m). On the hill you can see a cairn about 2 meters high and a shed for border guards. Beyond the hill, on the Swiss side you can see the Crete Seche Glacier. At the hill it is advisable to dress the harness, as the ferrata will start shortly (2h from the Crete Seche hut - 4h 30' from the parking lot).

From the Colle to start the Ferrata del Crete Seche you have to continue towards the west, on the left looking at Switzerland. In short, the first aided rock outcrops are reached. The ferrata extends along the ridge with plenty of exposed and aerial passages, some even not protected on the path. The difficulty, however, remains limited along its 800 meters of development up to the Punta di Oyace (3061 m) and then descends with metal equipment to the Colle di Oyace (3042 m) where the ferrata ends (1h 30 'from the start - 6h Total).

From Colle di Oyace you descend towards the valley along traces of a path that extends on the moraine reaching a stream formed by the Aroletta Glacier. Continue following the cairns in the direction of Plan de Saba near the Spartaco Shelter that we will leave to our left, going down to the hut (1h 30 'from the end of the ferrata - 7h 30' total) along a piece of the journey made the first leg. From the hut, follow the outward path backwards to the parking lot in Ruz (1h 15 'from the hut - 8h 45' total).

The Ferrata of the Crete Sech is a high mountain via ferrata not difficult in itself technically but that takes place in a wild environment, in a long hike with a high gap. The ridge itinerary is really impressive in a remote area.

The itinerary of the Crete Seche does not go well with being combined with other trips given its length. If you stay in the area, less than an hour's drive you could go down to the valley and from Aosta take the Ferrata Emilius (extremely difficult and long itinerary), the Aided path Panorama or go up to the Colle del San Bernardo for the Aided path to the Grande Chenalette. 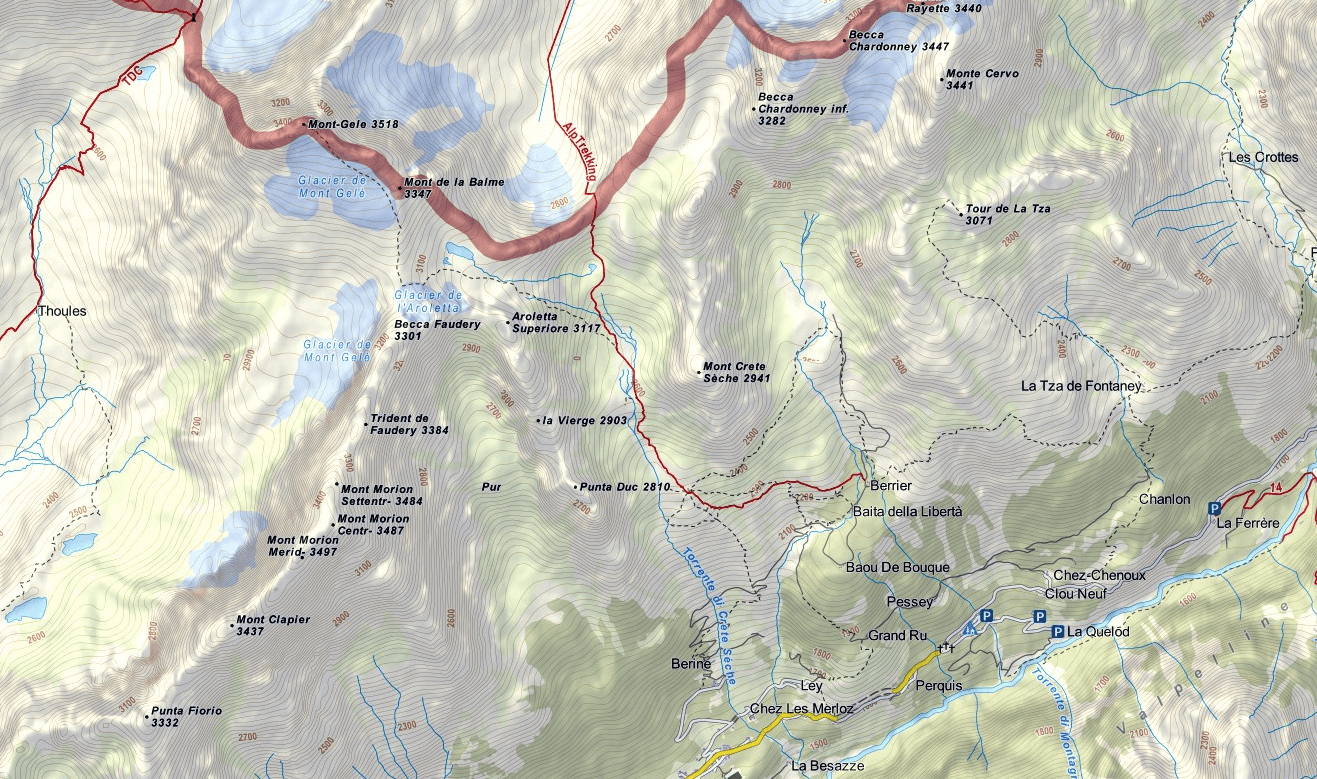 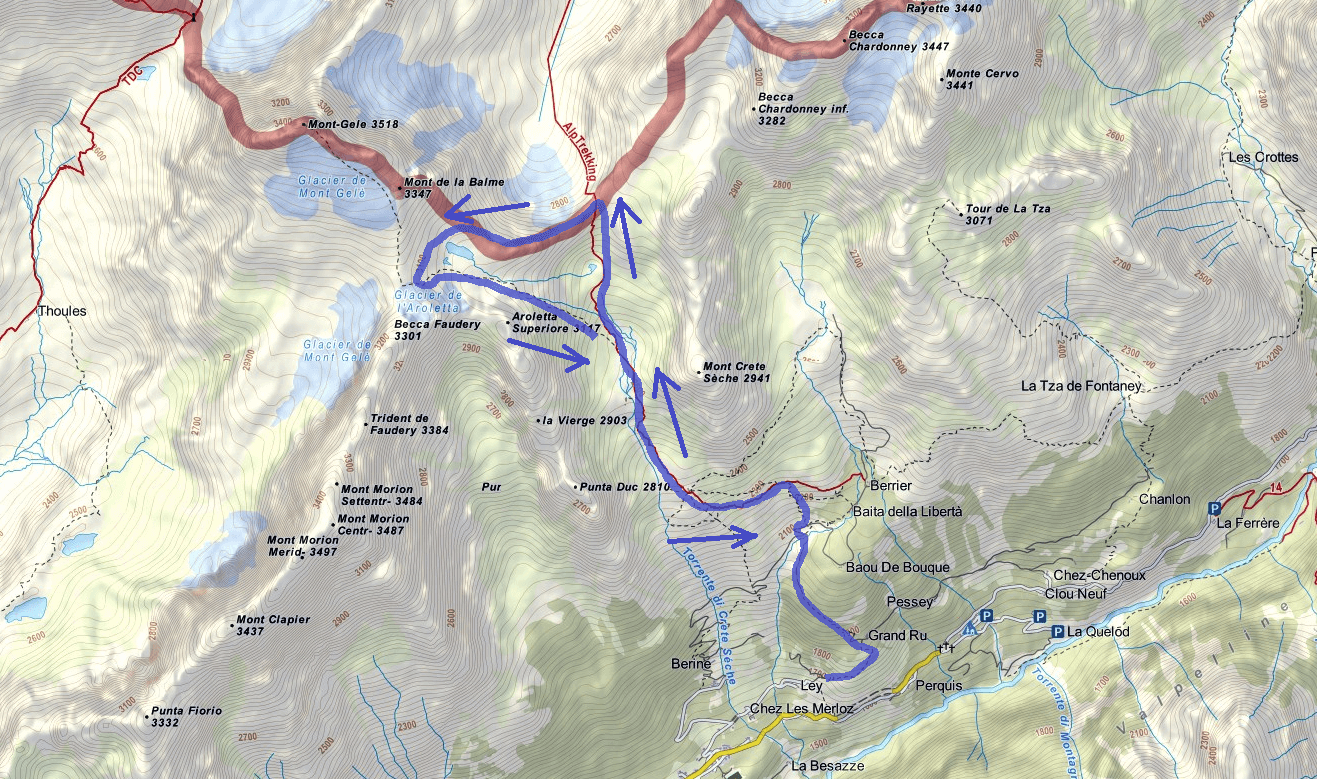 Pictures Ferrata del Crete Seche. The images included in the report were sent to us by the users of the site. If you are interested in sending us photos, use the form on the left or send them to our Facebook page. 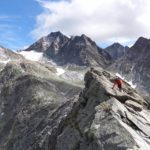 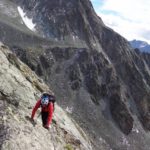 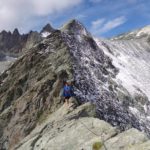 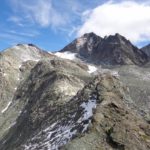 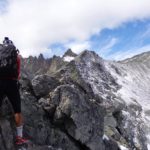 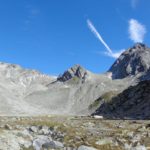 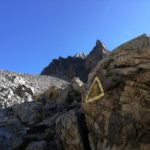 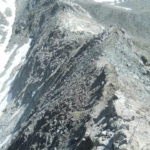 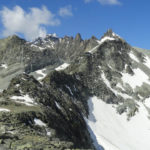 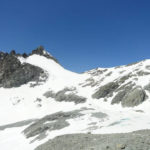 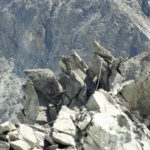 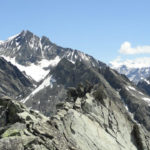 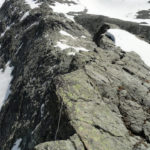 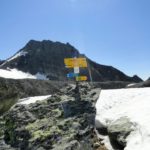 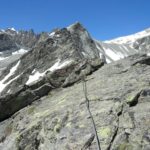 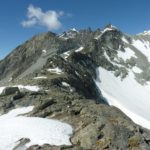 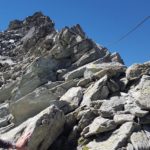 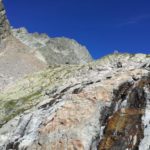 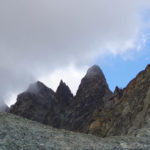 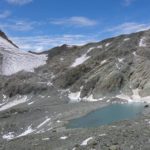 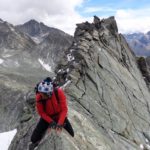 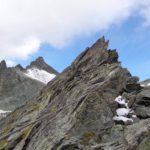 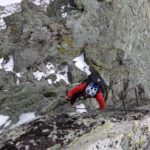 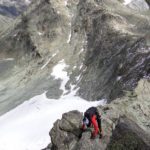 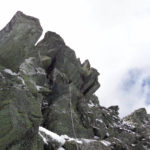 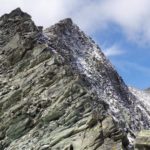