Via Ferrata Croda of Cengles

The difficult Ferrata to the Croda di Cengles is a high altitude via ferrata that allows us to reach one of the peaks in the Ortles group at an altitude of 3375 m. The via ferrata is athletic and although it is not long, it is challenging due to the smooth rock with little grip. The panorama from above is definitely extraordinary, ranging from the Ortles to the Cevedale to the Angelo Grande.

The starting point of the itinerary is the mountain station of the Kanzelift cable car in Solda. To reach Solda you generally exit the motorway at Bolzano Sud and continue to Merano. We then continue in the direction of the Stelvio Pass up to the signs for Solda on the left. Directions for Google Maps available here.

We got off the cable car at Serristori Hut (2721 m) and we will already see the impressive Croda di Cengles massif in the north-east direction, where it is also possible to see the characteristic summit cross. From the hut we follow the CAI path 5 which continues in the direction of the summit going up the morainic valley and following the yellow marks. Pay attention to the junction with path 2 which continues to the right towards the Great Angel while we will keep the left. We continue along a series of large boulders left by ice retreat and always following the yellow marks we go up towards the reddish walls of the Croda of Cengles. We will reach the Laghetti (2887 m - 45 'from the Serristori Hut) where we turn to the left towards the gully on which the normal route ascends, ignoring path 5B which on the right proceeds in the direction of Passo Zay. We proceed in a semicircle following the trail tracks up to a saddle: on the left it continues in climb the normal route (red signs) that we will walk back to, on the right we follow the yellow signs. After this detour we will notice one on the right slab from which the Ferrata Croda di Cengles begins named after Otto Erich (15' from the lakes - 1h from the Serristori Hut).

The first meters they rise on a smooth slab followed by a first traverse to the right and a second short vertical slab. We continue uphill diagonally on the reddish and black walls of the Croda di Cengles, we bypass an edge in increasing exposure and we cross to the right. We continue now uphill following some yellow signs present with an alternation of climbing sections and stretches of compact rocks but with few holds that will force us to pull on the cable to gain altitude. We have one behind us beautiful panorama with the Ortles, the Monte Zebrù and the Gran Zebrù on one side and theAngelo Grande and Cima Vertrana on the other with the Cevedale in the background.

We now come to a leaning dihedral which, with good holds, we can go up again without any particular difficulty although the rock is particularly smooth. We leave the dihedral and meet some rocks to climb diagonally and then tackle a slab with an obvious crack where it is possible to climb to climb it. We face a short metal ladder and a couple of not difficult crossings and we are in the finishing straight of the Ferrata Croda di Cengles (3310 m - 1h 30' from the start - 2h 30' from the top station of the cable car).

From the end of the via ferrata we graft into the normal route that goes up the last few meters using some wire ropes and a smooth stretch of rock to which were added some useful metal handles. We continue the climb following the red signs and facing a couple of aided sections where the rock is smoother and exposed. We are now in sight of the cross that represents the highest point of the trip (3375 m - 15' from the end of the ferrata - 2h 45' total).

The descent from the Croda di Cengles takes place by the normal route. The first meters of descent they retrace the last stretch of the climb up to the graft of the via ferrata and it is slightly more difficult than the rest of the descent and it is better not to remove the harness. Continue to descend following the many red signs. We always go down alternating short stretches of climbing (max grade I) with aided sections until we pass from the northern slope of the Croda di Cengles to the less demanding west. We continue to descend until we reach a saddle where we will take a steep detrital gully with which we will return to the junction taken in the approach to the beginning of the ferrata (1h from the end of the ferrata - 3h 45 'total from the top station of the cable car). At the junction we will travel back along the approach path to the Serristori Hut (4h 30 'total from the top station of the cable car) and through cableway we'll go down to the parking lot.

From the top of the Croda di Cengles you can enjoy one of the most evocative views of this corner of the Alps: the Ortles, the Zebrù, the Gran Zebrù, the Grande Angelo and many other arduous peaks surround us and this is a motivation rather than enough to cover this demanding via ferrata. The via ferrata is logical, demanding and sometimes physical as well as taking place in a high altitude environment. With the approach, thanks to the cable car, you will save a lot of energy and time but you must not overlook the context in which this trip takes place, which is to be reserved for experienced mountain people.

The via ferrata has excellent equipment and the first section was recently added (2013), allowing an escape route after 100 meters. The rock on which the ferrata extends is very solid but also smooth at different points, being abundantly smoothed by the atmospheric agents and this greatly reduces the climbing capacity, increasing its degree. For these characteristics it is a rather physical via ferrata.

The climb to the Croda di Cengles is a high mountain trip that takes place in a truly impressive context. Behind us we will always have the Ortles and the Gran Zebrù that will keep us company during the ascent. If you want to stay in the Solda area, you could consider going up the very difficult day Ferrata Tabaretta maybe staying the night before at the hut of the same name about an hour from the top station of the Orso cable car.

If you wanted to return to Bolzano, you could climb the difficult one Via Ferrata Hoachwool in Naturns or in Merano the Via Ferrata Heini Holzer. Along the Stelvio pass state road it is also possible to reach the Ferrata di Trafoi in the omonym village. Close to Merano a new via ferrata has been installed in 2020: Ferrata Ziel.

Going up the Stelvio and then descending towards Ponte di Legno you could also go up another high mountain ferrata that takes place in a grandiose environment, or the Via Ferrata al Sentiero dei Fiori or for experienced high mountain hikers also the Ferrata Terzulli at the Adamello or the Ferrata to the Corno del Grevo. If we instead drive to the Val Passiria, we can reach the recent Ferrata of Stuller Falls. 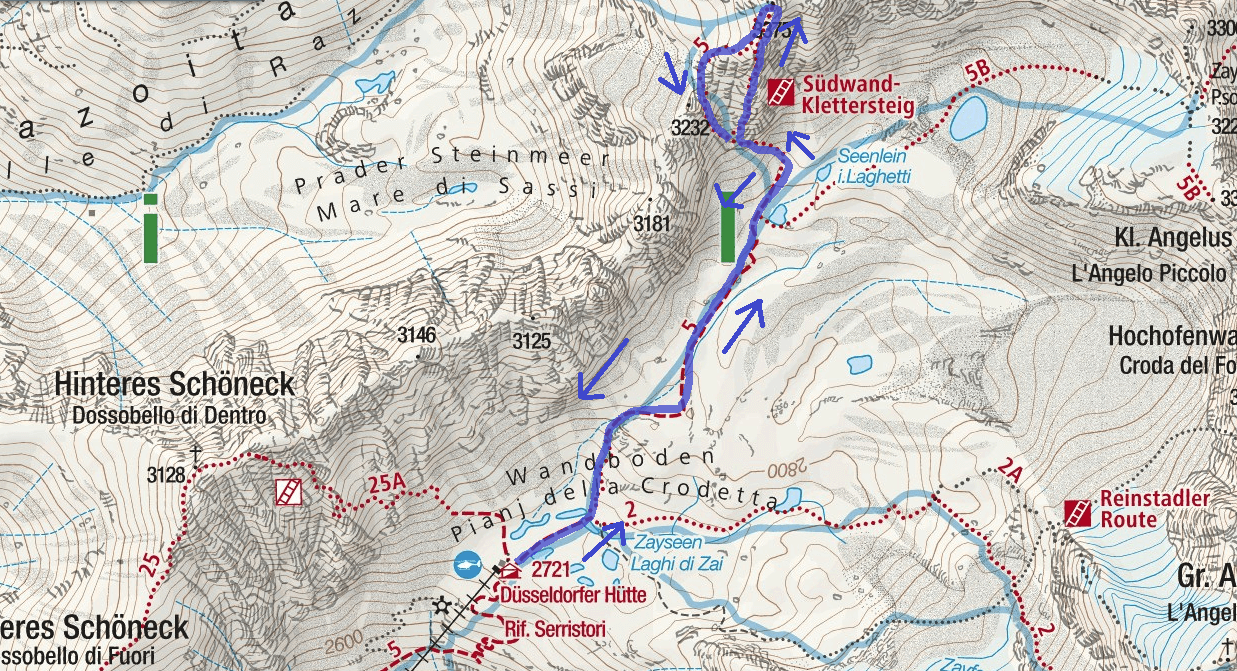 Pictures Ferrata Croda of Cengles. The images included in the report were sent to us by the users of the site. If you are interested in sending us photos, use the form on the left or send them to our Facebook page. 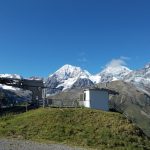 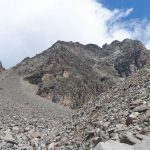 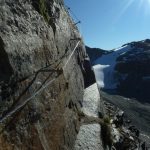 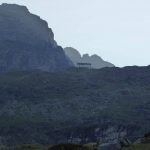 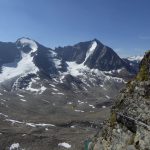 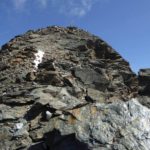 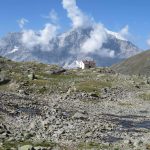 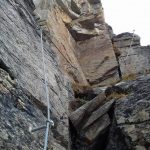 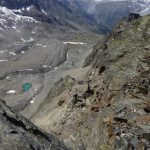 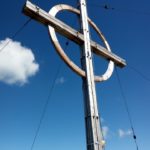 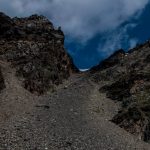 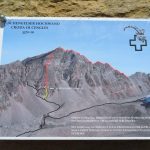 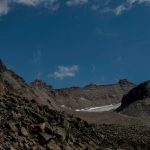 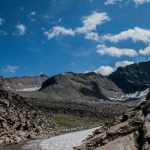