The evocative Ferrata delle Bocchette Alte is one of the most famous high-altitude routes in the entire Italian Alpine region and beyond. The itinerary is grandiose and extends in an unforgettable environment. The ferrata does not have technically difficult passages but it is a high mountain trip with many exposed stretches (some even not protected). Near the Vedretta di Tucket there is generally snow and ice, even in late season, so it is necessary to be prepared. If you want to join other itineraries, it is advisable to stay overnight in one of the mountain huts.

The starting point of the itinerary is the car park near Rifugio Valessinella (above Madonna di Campiglio) which can be reached by car. To reach Vallesinella, as soon as you enter the center of Madonna di Campiglio you will come to a roundabout where a brown sign shows you the directions that in 4 km take us to the parking lot.

Having made this necessary introduction to the proposed itinerary, from Vallesinella hut (1513 m) we will have to go up through the CAI 317 that climbs steeply in the wood to the Casinei Hut (1850 m - 45 'from the parking lot). From the Casinei we will go up to the Brentei Hut (2182 m) via the CAI 318 in south-east direction. This trail - which has some exposed but not difficult stretches - is also known as the Bogani Gallery Trail.

From Rifugio Alimonta we continue uphill along the detrital valley between large boulders up to a saddle: on the right we reach Bocca degli Armi where we take the Ferrata delle Bocchette Centrali or downhill the Ferrata Spellini, on the left we continue towards the start of the Ferrata of the Bocchette Alte. This stretch that runs along the left side of the valley brings us to some aided sections including a couple of ledges and some sections of aided rocks. Reach the start of the Ferrata delle Bocchette Alte near a stairway next to which there is a metal slab (45 'from the Alimonta Hut - 4h total). We continue the path taking the stretch of ferrata named after Umberto Quintavalle where we will use different stairs to climb the northern slope of Cima Molveno from which we will descend in a north-western direction until we reach the Bocca Bassa di Massodì. (2790 m -45 'from the start - 4h 45' total) where a left goes down the Via Ferrata Oliva Detassis which can also be used as an escape route to return to the Alimonta Hut or to the Brentei. There Low Saddle di Massodì it is about ten meters long and is a particularly exposed stretch where it proceeds on snow or gravel. In the case of inexperienced people, a piece of rope may be useful to proceed with preserving.

From the Bocca Bassa di Massodì begins the section of the itinerary dedicated to Mario Coggiola, a stretch that ends at the Bocca Alta di Massodì. This section is characterized by a set of stairs separated with aided stretches exposed but not difficult to reach the flat summit of Spallone di Massodì (2999 m) and to go back down from the iconic Friends' Scale 30 meters long, exposed and challenging given the slope. Once down the ladder we continue with some easy aided sections and stairs in the direction of Bocchetta Alta di Massodì (2950 m - 45' from Bocca Bassa di Massodì - 2h 15' from Rifugio Alimonta).

From the bocca di Tucket you descend along a snowfield not particularly easy in which good foot is needed to descend (useful hiking sticks). After the descent, follow the trail tracks that lead us to the Tucket Hut (30 'from the Bocca di Tucket - 5h 30' from the Alimonta Hut).

Once at the Tucket Hut (2272 m) and at the end of the Ferrata delle Bocchette Alte, the descent route to the Vallesinella Hut is the long path without difficulty CAI 317 which in a north-westerly direction leads first near the Casinei Hut and then downhill to Vallesinella (1h 30 'from the Tucket Hut - 10h total).

The equipment is generally in good condition and the stairs are stable and well built although not recent. The Garbari section of the via ferrata can create particularly risky situations based on snow cover and for this reason it is absolutely recommended to bring crampons and ice axes with you in case the equipment is unusable due to snow.

The ferrata is classified as difficult due to the exposure and some unaided sections (Bocca Bassa di Massodì in particular) exposed while the actual technical difficulties are moderate. However, the environment is that of high mountains and it is a long and physically expensive itinerary. One must have good familiarity with untangling aided sections given the continuous ups and downs.

A note in particular should be made on the possible crowding of the route, a feature common to Via Ferrata in the Brenta Dolomites. If traveled in the months of July and August it is better to leave early and try to avoid the most crowded moments in the most exposed sections

As anticipated in the approach, the Ferrata delle Bocchette Alte certainly offers the opportunity to be combined with the Ferrata Detassis which is a variant in the stretch that from Bocca d'Armi rises to Cima Molveno. The Ferrata delle Bocchette Alte is also often combined with Via Ferrata Bocchette Centrali of which it is the natural I continue. In this case it is definitely recommended to stay at the Rifugio Pedrotti before embarking on these two trips.

A route that is certainly less known but which is the natural continuation of the Ferrata delle Bocchette Alte is the Via Ferrata Benini which will take us to the Passo del Grostè from which we will be able to undertake numerous other aided trips (for example the Aided path Vidi, the Via Ferrata of the Val Gelada or the Aided path of the Palete). In these cases, it is certainly a matter of multi-day trips which, due to fatigue and itinerary, are to be done only if experienced and well trained.

Finally, another opportunity for an aided itinerary is to travel on Viol Aided pathuphill to Rifugio Brentei or heading south you could go along the Via Ferrata Brentari, the Via Ferrata Castiglioni, the Aided path dell'Ideale or the recent Aided path Apolloni. 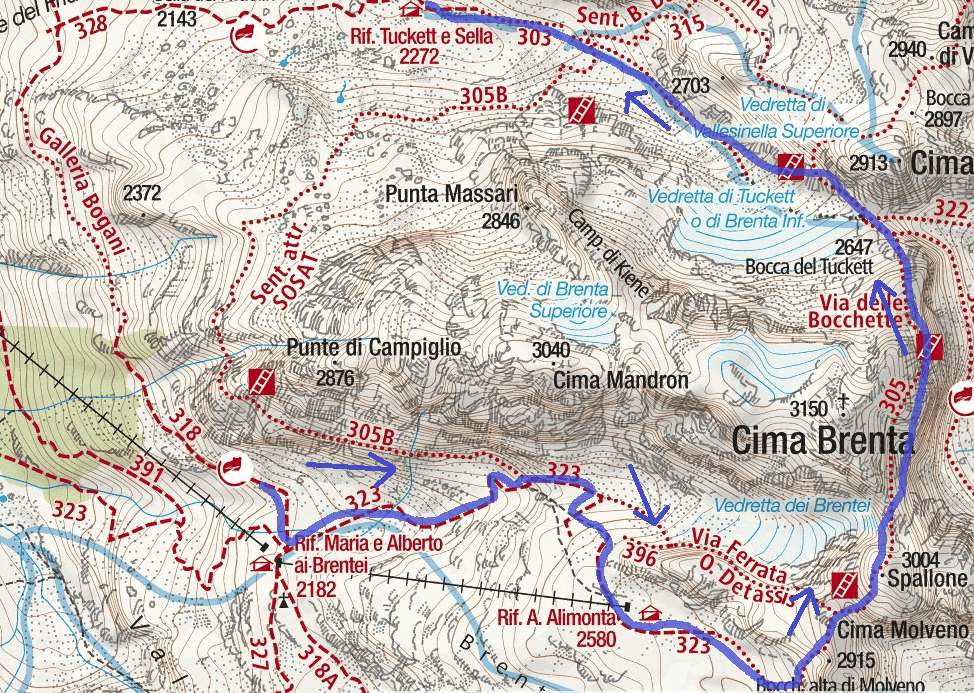 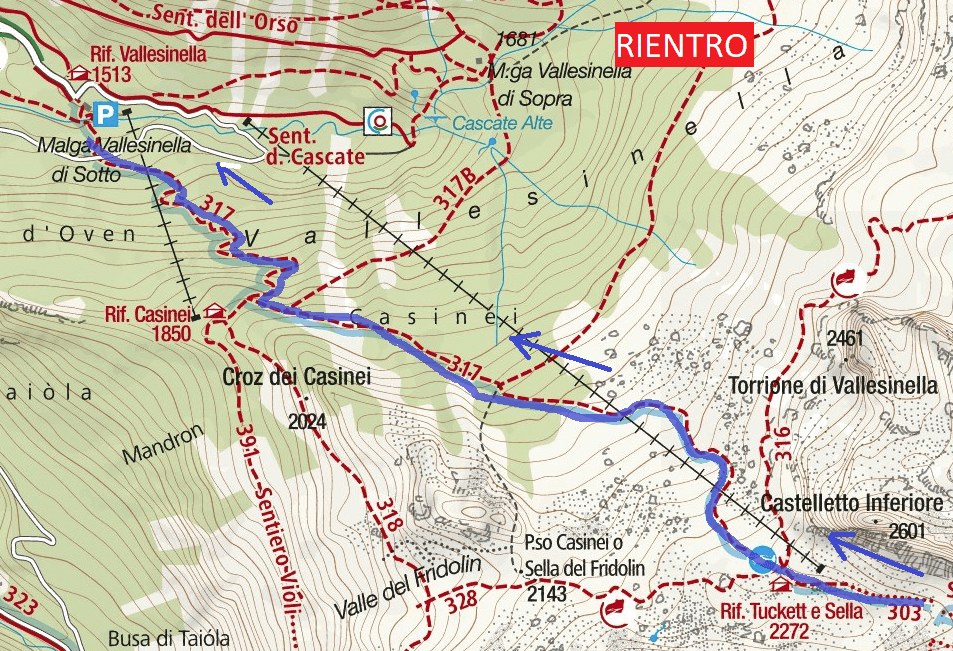 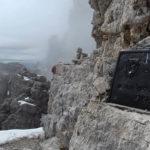 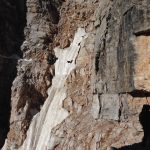 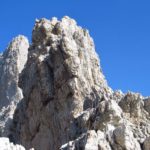 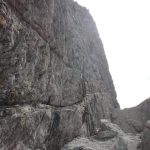 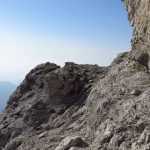 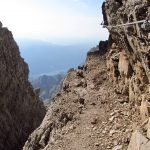 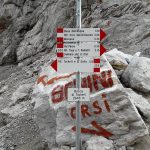 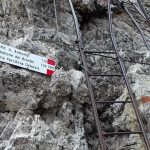 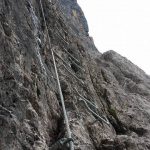 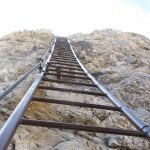 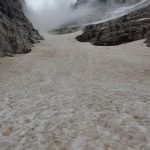