The panoramic Ferrata delle Scalette (literally "Ferrata of the Stairs") is a via ferrata that extends along the northwest wall of the Torre di Toblin in the Sesto Dolomites. The via ferrata is exposed and short with some challenging steps to be reckoned with. The ascent route includes a descent to a subsequent via ferrata (Ferrata Hosp). The environment surrounding the via ferrata is magnificent and includes some of the most iconic peaks of the Dolomites.

The starting point of the itinerary is the Auronzo Hut on the Veneto side of the Sesto Dolomites. To reach the hut the main and easiest access is by car from Misurina (m.1750), through the 7 km panoramic road with toll, Misurina can be reached from Cortina or Auronzo di Cadore (SR48 and then SP49) or from Dobbiaco in Val Pusteria (SS 51 and then SP49). Directions for Google Maps available here.

The goal of our approach will be the Tower of Toblin. Leave the car in the parking lot of the Auronzo Hut (2320 m) follow the wide panoramic trail 101 that leads us to the Rifugio Lavaredo (2344 m - ca 30') and then reach Forcella Lavaredo (2454 m - 45') on a slightly more steep slope. From Forcella Lavaredo a wonderful panorama opens up before us: the Croda di Passaporto, the Monte Paterno, the Sasso di Sesto and the Torre di Toblin and to the left, visible after the first meters of descent, the 3 Cime di Lavaredo.
We continue in the approach downhill remaining on the wide path 101 and we ignore the various traces of the path that come off mainly towards the left. We reach the Locatelli Hut (2450 m - 1h 15' from the car park), an important crossroads of trails in this area of the Sesto Dolomites.
From the hut we continue following some red triangles in a northerly direction following the path that goes around the Sasso di Sesto and then staying on the left side of the Tower of Toblin passing through a old shelter dating back to the Great War. We reach aiconic metallic cross and, following the red markings on the rock, we will reach the start of the Ferrata delle Scalette at the Torre di Toblin (20 'from the Locatelli Hut - about 1h 30' total).

To reach the effective start of the via ferrata we follow some red arrows that lead us to go up some easy rocks first to the left then to the right until we reach a marble slab indicating the historical origin of the route dating back to the First World War. The via ferrata starts vertical going up a well-appealed corner with the cable on our left. The passage is fairly demanding but the good grips for the feet help us to go back up rather easily. We bend to the right to climb inside a well-slit crack where towards the inside of the slot we find good supports for the feet. We climb this first stretch and, bending towards the outside to the left, we climb diagonally reaching the first ladder. Climb the ladder. we continue uphill on easy and short leaps reaching the first decidedly exposed stretch of the road. We climb an edge near an ancient wooden plank still present. We will have climb two ladders that develop in full exposure. Nothing technically difficult but the high exposure of the route starts to appear.
We finish these steps and walk along a ledge to the right under a rocky roof. We continue now in the central section and certainly more characteristic of the route. We climb on a crack reaching a long chimney that we will climb with the help of some stairs. The first two ladders rise vertically while the next cut the chimney perpendicularly rather supported by bringing us to the opposite side. We continue uphill in a vertical but not difficult stretch, reaching the most difficult passage of the road. To continue the ascent of the chimney we will have to reach a ladder on the left side of the chimney as well as the insulated wire rope. To reach this ladder, however, we will have to break into the chimney as the left wall is devoid of support for the feet and is generally humid, also making a progression "of arms" rather difficult. The greatest effort consists in the first 2 months to reach the right side in split. At that point, carefully looking for the supports continues towards the first ladder. Reached and climbed the coveted ladder we leave the narrow chimney and walk a few meters of rocks towards the left for a few meters before taking a exposed sideways with foot brackets with a wonderful view behind us.
We are at the base of the last chimney that we will go up again with the help of many ladders. Let's start with two ladders that go up inside the crack. We now move to the left in full display for climb a new ladder. We are at the last stretches of the via ferrata. We climb the exposed and well-set edge to then bend to the right meeting alast ladder next to the remains of the Great War with which we reach the top floor where there is the Vetta Cross of the Toblin Tower (2617 m - 45 'from the start - 2h 15' total).

From the summit of the Torre di Toblin we will have to get off and both descent options are aided. It is generally recommended to go up from the Ferrata delle Scalette and descend to the Via Ferrata of the Hosp Chaplain (30 'from the summit - 2h 45' total). Given the high attendance of the via ferrata it is definitely recommended to follow this route of ascent and descent. It can also be added that the Ferrata delle Scalette has 3 passages which raise its degree of difficulty with respect to the Ferrata Hosp and therefore it is preferable to follow it uphill.
After descending, follow the tracks to reach the approaching path that will lead us back to the Locatelli Hut, the Forcella Lavaredo and then to the Auronzo Hut where we parked (1h 15 'from the end of the descent with the Ferrata Hosp - 1h 45' from the summit of the Toblin tower - 4h total).

The Ferrata delle Scalette is often considered relatively easy and this fame is perhaps linked to the brevity of the route. A more careful consideration is needed on the difficulty level. The via ferrata is of medium-easy level, to a large extent mainly being mainly metal ladders to be climbed. However, there are a couple of more challenging and non-trivial level crossings that raise the level of difficulty: the initial dihedral, a passage inside the chimney and the last corner. The 3 passages are distributed along the way and this should help not to burn off the energy and reach the peak without complications. Although for the trained hiker this ferrata will be of a moderately difficult level, these 3 passages together with the constant exposure make the difficulty level of the difficult route.
From the landscape point of view we are in one of the gems of the Dolomites and for this reason the via ferrata is often very busy in the summer months and, to avoid traffic jams, it is advisable to follow it at the beginning of the morning or in the second half of the afternoon so as to avoid being stranded. along the climb from other hikers.

Going up the Torre di Toblin with the Ferrata delle Scalette is a very beautiful and very popular route as well as the downhill ferrata - Cappellano Hosp. In the immediate vicinity also extends the Ferrata Innerrkofler at Monte Paterno easily reachable from the Locatelli Hut with possible return to the Forcella Lavaredo for a circular itinerary.
Moving towards the most central part of the Sesto Dolomites we meet the Ferrata Severino Casara that circumvents the south face of the Croda dei Toni or further north we find two via ferratas ascending to the Croda Rossa di Sesto: the Ferrata dei Costoni and the Via Ferrata Zandonella.
Going south towards the Lake of Misurina (in this case it is better to get organized and leave the car at the Lake) you could drive along the Aided path Bonacossa, the Via Ferrata Capitano Bilgeri on the Monte Piano or the Ferrata Merlone to the Cadini. 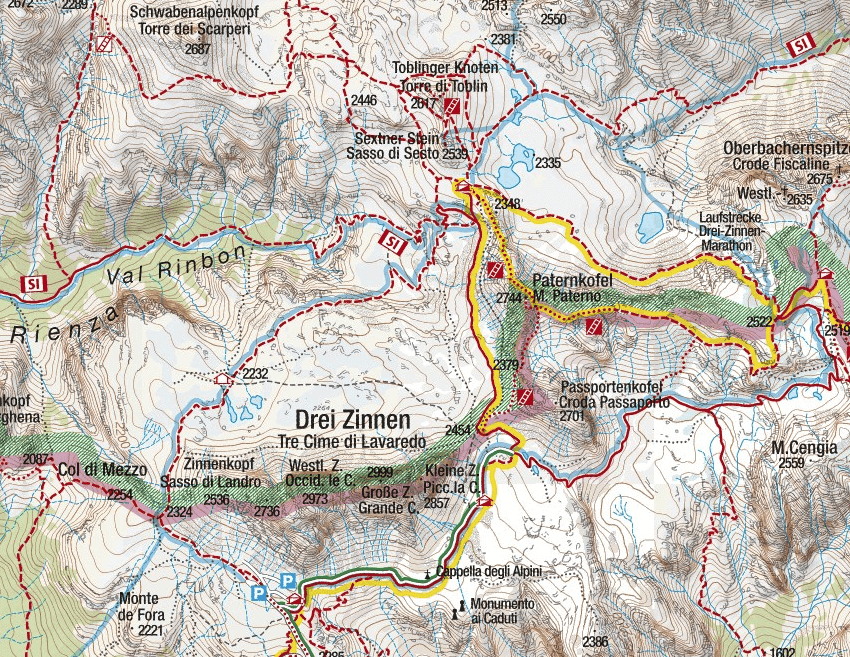 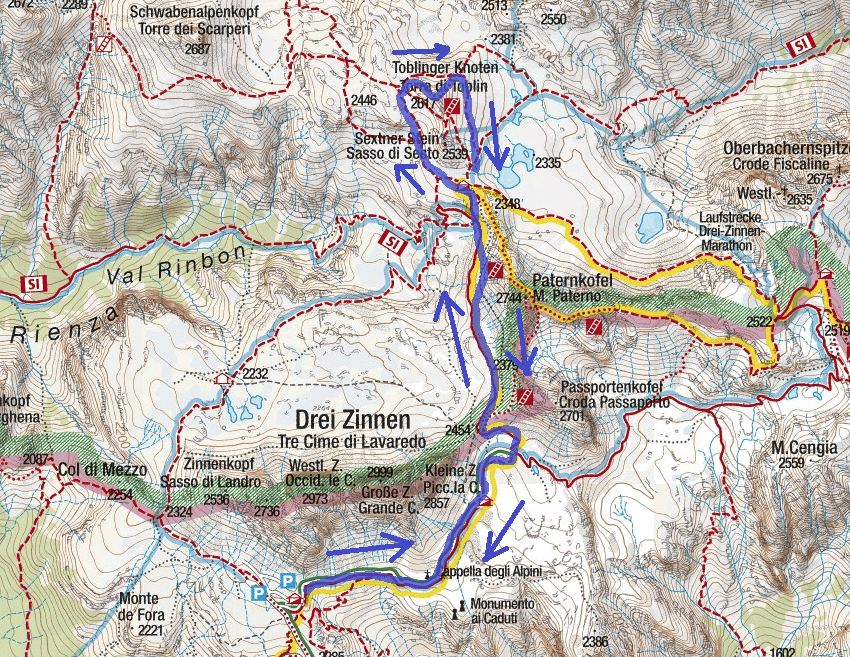 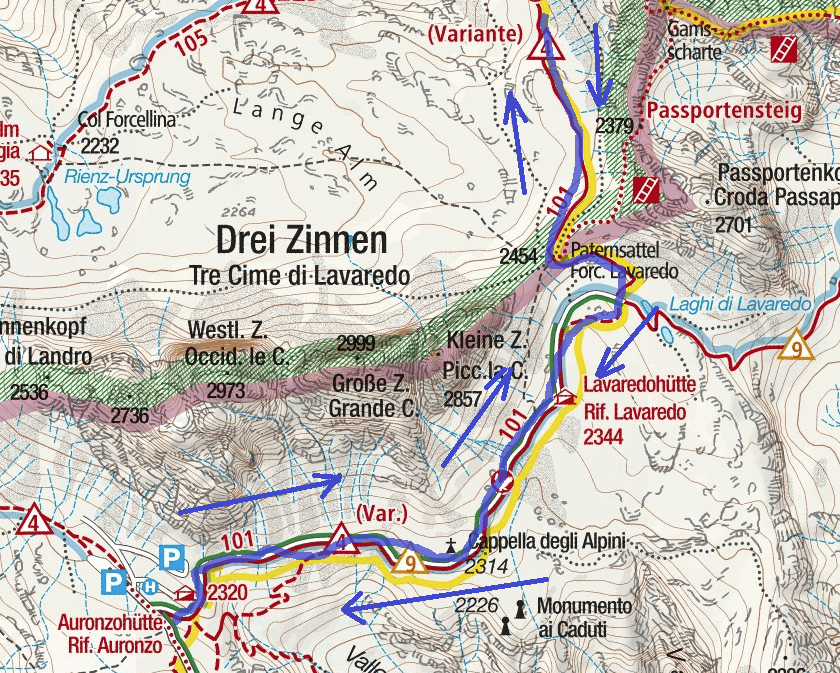 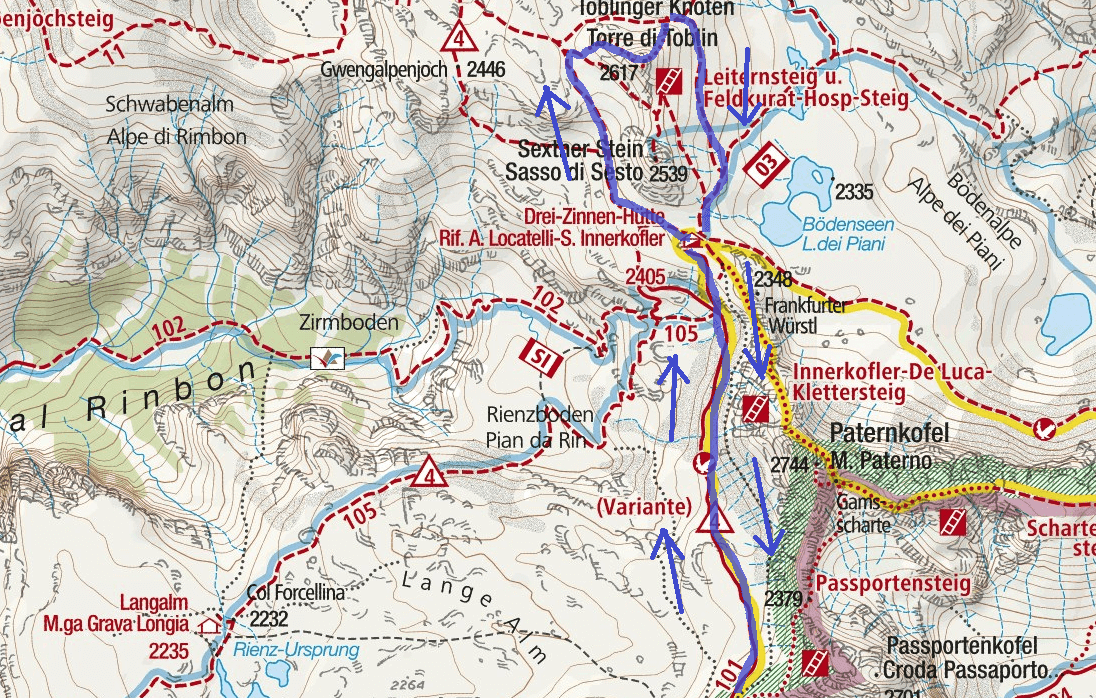 Images Ferrata delle Scalette Torre di Toblin. The images included in the report were sent to us by the users of the site. If you are interested in sending us photos, use the form on the left or send them to our Facebook page.