The Ferrata Ricci takes us to the Eastern Horn, 9 meters lower than the Western Horn, yet the most suggestive of the two peaks of the Corno Grande. The impressive East wall rises for almost 1500 m, impressive on the valley below.

The recommended starting point for this itinerary is Prati di Tivo in the province of Teramo. Generally it is reached via the A24, exit San Gabriele - Colledata and then following the signs for the SS del Gran Sasso and then turning towards Prati di Tivo. Found parking, in the summer months you can use the convenient cablecar which brings us to the Madonnina area.

After descending from the cablecar, the path 103 is started, which goes up towards the east ridge of Corno Piccolo. After a while there is a saddle near some embankments. Take the left towards the Franchetti hut. The path climbs up to the Passo delle Scalette and is suitably aided where exposed and a little less than 1 hour takes us to the hut after having climbed an exposed valley. From the hut we see a clear trace that goes down towards the Cornacchie valley towards the left. It is undertaken and soon we arrive along a detrital slope to the start of the Ferrata Ricci (1h 15 'from the cablecar).

The Ferrata Ricci extends along the walls of the north face of the Corno Grande. It sticks up going up a not difficult diagonal slab that deposits us in a saddle where the cable momentarily ends. We turn to the left along a short ledge going up a short detrital section that leads us to where we re-attach the metal equipment. We go up a strenuous but not difficult inclined wall that places us in the most evocative stretch of the road. An exposed balcony on the "Paretona" east of the Gran Sasso - 1300 m in altitude of a rare beauty and grandeur. Walk along this edge until you reach the slope along an exposed edge of about 30 meters (key passage). The edge is definitely exposed, however it has a grip that favors climbing. Continue the climb for a few meters beyond which the cable ends at the northern edge (2700 m - 1h 15 'from the start).

Continue up some exposed walls but never difficult to cross the normal ascent route to the Eastern Horn. Cross an exposed saddle and reach some rocks to climb (1st degree). We then reach the top of the Eastern Horn (30 'from the end of the ferrata - 1h 45' from the start - 3h from the cable car).

For the descent there are two options:

The route deserves a note in case of snow. It is not uncommon that even in advanced season this itinerary presents snow. In this case the difficulty of the itinerary changes drastically and it is advised, given exposure and route, to expert and suitably aided hikers. The last note concerns the normal descent route that requires particular attention in the unaided sections in which it descends.

The Ferrata Ricci can be easily chained to the neighbors Ferrata Danesi and Ferrata Ventricini that climb to the Eastern Horn. In this case we descend from the Sella dei Due Corni in the opposite direction from the Franchetti hut until we first reach the Ferrata Danesi, which takes us to the top of Corno Piccolo, and then the Ferrata Ventricini, which takes us back to the cablecar. Pay attention to the length of this circular route. We recommend staying overnight at the Franchetti hut. If you wanted to reach the southern slope of the Corno Grande from the Sella dei Due Corni you can use the Via Ferrata Brizio and from there reach the Bafile shelter with the homonymous Ferrata. On the south side of the massif the magnificent is also encountered Path of the Centenary and the Ferrata Famigliari. 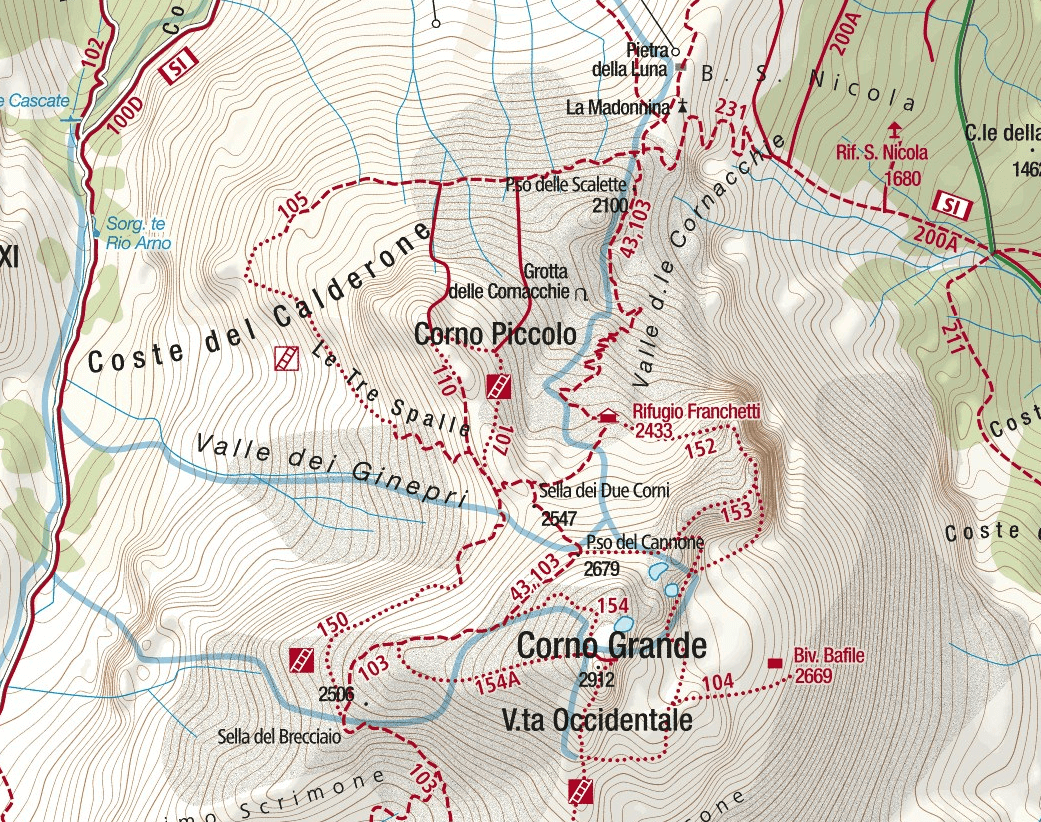