This easy via ferrata can be considered the only one of its kind in Italy. It retraces a gorge in itself arduous to those who do not practice canyoning, crosses tunnels under bridges and forces the hiker to make do to reach the start. The scenarios that offers the gorge deserve the fatigue to reach it and follow it. We recommend leaving early in the morning to enjoy the best light on the way.

The starting point is near Rocca San Zenone in the province of Terni. Reached the town continue for about 2.5 km along the SP 67 until you reach a sharp bend to the left where there is a large parking lot and an abandoned structure. It is best to park the car.

Take the dirt road that descends to the right following some CAI signs. You reach a bridge that crosses the via ferrata and on the right you follow the path. We will find ourselves having the river on our left and the via ferrata on our right. You will have to go back down towards the river trying to find the difficult track. Once you have reached the river, you must go along it for about 30 minutes. In this section a pair of gloves and a shears can be useful to open a gap between the brambles. Near a tunnel over which the via ferrata passes, the via ferrata begins (approximately 1 hour from the car park based on the difficulty of the progression).

The via ferrata starts stretching out on a couple of tunnels of which the second is more difficult. There is the aid of some metal equipment on which to rest the feet. Leaving the second tunnel (three in total), you start climbing on moss-covered rock, which is then made slippery by the humidity present. The via ferrata continues in the gorge between cables and metal equipment. The ferrata ends (1h 15 'from the start - approximately 2h 15' from the parking lot) with clear blue signs where you can choose whether to finish and go up towards the provincial road with the aid of some ropes that go up the wall, or if you continue along the stream (see Opportunities below).

Go up the ropes near the blue signs until you reach the paved road ascending towards our car (3h total).

If you walk in spring or winter you have to consider that you will bathe your feet abundantly in different places. It is also advisable to wear gloves and tools to cut the brambles. If carried out in late summer, the river bed will probably be dry and therefore it will be easier. On one side the gorge deserves to be crossed with water, on the other it will get wet. The choice for the hiker.

In the middle of the itinerary we report an escape route marked with blue paint.

If at the end of the via ferrata (blue signs) you decide to continue, you will have to continue along the stream until you meet a Tibetan bridge to cross. From that point, continue until you reach obvious red signs that will take you back to the via ferrata via an aided path. From there it runs along the tracks until it reaches a cockpit towards which the red arrows indicate to enter. Go down the ladder and continue in the direction of the village of Rocca San Zenone from which you will then have to return to the car. This itinerary is to be considered 5h to which must be added the ascent from Rocca San Zenone to the car (at least 1 h for a total of at least 6 h).

Traccia GPS per Ferrata Gole del Serra. Itinerary: as per description above.

Images Ferrata Gorges of the Serra. The images included in the report were sent to us by the users of the site. If you are interested in sending us photos, use the form on the left or send them to our Facebook page. 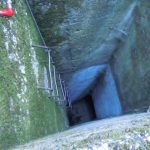 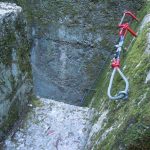 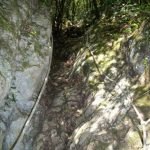 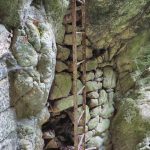 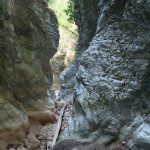 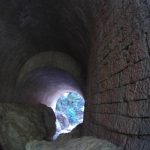 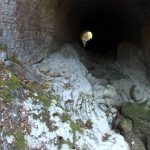