Via Ferrata of Macugnaga Guides

The Ferrata of the Guides of Macugnaga is a recent via ferrata built in a high altitude itinerary that extends at the Passo di Monte Moro along the Cresta di San Pietro. It is a ridge, aerial and short ferrata. It does not present particular technical difficulties even if it is very exposed and in a high mountain environment.

The starting point of the itinerary is the top station of the cable car that connects Staffa (province of Verbania) to the Passo di Monte Moro. To reach Staffa, the A26 is generally used up to Gravellona Toce on the western side of Lake Maggiore. Continue past Anzola d'Ossola and then turning along the former SS549 now SR549 of Macugnaga that goes up the valley until you reach the village of Staffa where we will find parking near the cable car.

From the station in the top of the cable car Yes hike downhill to the rifugio Oberto Maroli. From hut continue towards the San Pietro ridge. Follow the trace under the walls until you reach the start of the ferrata (30' from the cablecar station).

The Ferrata delle Guide di Macugnaga starts immediately vertical vertical going up wall with plenty of brackets to support the feet. At the top of this wall , turn to the right along the ridge. Initially a short section is made in climbing, exposed but not difficult. Beyond this section begins a stretch of ridge with short ups and downs on rocky pulpits. The first of these pulpits is in slight overhang. Ahead of us you see the second section of the via ferrata. You descend few meters and then you reach a airy and exciting bridge . Crossed the bridge we proceed on a traverse to the right and we climb a short wall. You continue uphill along the equipment, ending the stretch of the road shortly and starting the descent, always aided but less demanding, thus reaching the end of the via ferrata (1h from the start).

At this point you can proceed back to the cable car (20 'from the end of the via ferrata - 2h total).

An alternative is to continue in the direction of the Joderhorn, a rocky prominence not far from the via ferrata. From the end of the ferrata we proceed to the left following some stone cairns that lead us up the steep slope until we reach the summit ridge (3036 m) from which it is possible to descend to the summit cross with the book of signatures. From here it retraces the path that led us to the summit until it descends to the Passo di Monte Moro with a short aided section and then to the cable car (45 'from the Joderhorn).

From the end of the ferrata, follow the clear path that leads to the cable car in 20 minutes (2h total).

This short ferrata is a classic ferrata of the ridge in which the exposure reigns supreme. The technical difficulties are modest. The difference in height is low and all concentrated in the first vertical wall. Afterwards, follow an aerial ridge with the bridge to make everything even more exposed. We must take into account that we are in the high mountains, at the threshold of 3000 m and therefore pay due attention to the equipment and weather conditions present.

The Macugnaga Ferrata delle Guide is located relatively close to two via ferrata in peripheral areas, so it may be worthwhile to combine them once in the area. There Via Ferrata Gabi Simplon at the Sempione pass it is about 1 hour and 15 minutes from Staffa and with a not particularly long itinerary. There Ferrata del Lago it is a long itinerary that generally requires an overnight stay in a hut but could be an alternative, considering going up the Andolla Hut in the afternoon (path 2h). 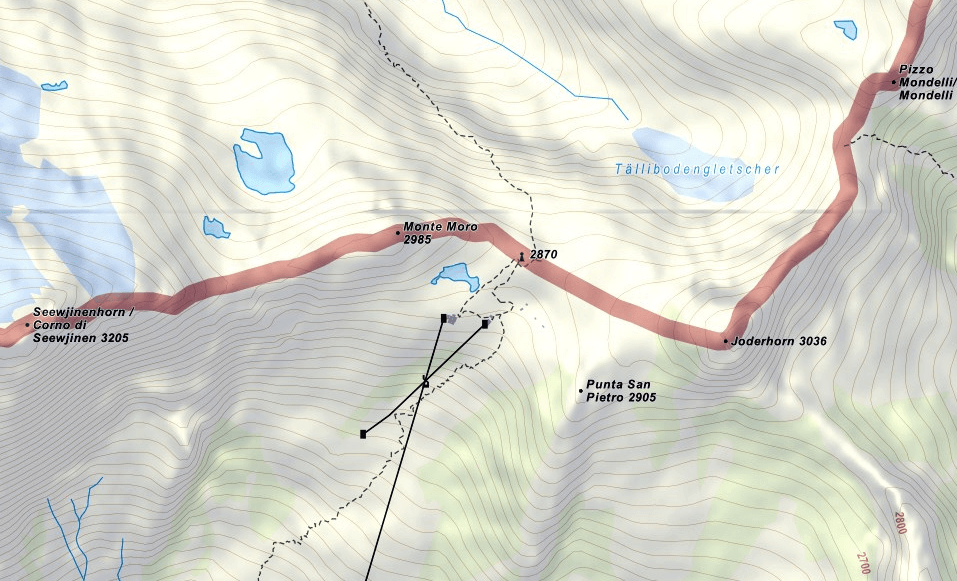 Images Ferrata of the Macugnaga Guides. The images included in the report were sent to us by the users of the site. If you are interested in sending us photos, use the form on the left or send them to our Facebook page.