La Ferrata Masarè is a wonderful itinerary that runs along the south side of the ridge between Punta Masarè and Roda da Vael. The proposed itinerary starts from the Paolina Hut reachable from Carezza in the province of Bolzano via convenient cable car. The itinerary is of medium difficulty although some points require more attention and commitment when going downhill.

The starting point of the itinerary is the Paolina Hut (2125 m) which can be reached via the Paolina Cableway from the town of Carezza near the Passo di Costalunga in the province of Bolzano. Once you reach Carezza, you can park in the large parking lot available near the skilifts.

From Rifugio Paolina to start the ferrata we will have to reach the Roda da Vael Hut (2283 m). From the Rifugio Paolina we keep to the right in a south-eastern direction the CAI 539 path that climbs without excessive slope. We graft onto the CAI 549 which runs halfway up and soon we reach the monument to Christomannos - to which we owe the first Alta Via that connected Bolzano to Cortina. The view from the vantage point of the Val di Fassa on the Latemar and on the Marmolada in front of us. We remain on the CAI 549 that on a comfortable and wide path leads us to reach the Roda di Vael hut slightly downhill (45 'from Rifugio Paolina).

From the Rifugio Roda di Vael we continue uphill slightly to the left where we meet a first saddle: on the right the CAI 541 runs halfway up the hill, we continue straight uphill following the signs for the Ferrata Masarè. In short we reach a second crossroad: on the right go up to Roda da Vael, we will keep to the left to take the Ferrata Masarè uphill. You continue uphill on clear traces and we reach the start of the via ferrata after a saddle that puts us again on the slope of the Paolina Hut (45 'from the Roda di Vael Hut - 1h 30' total)

It is also possible to take the route from Val di Fassa. In this case one could start from Vigo (indications here), going up with the cableway to the Ciampedie Hut and via the CAI path 545 to reach the Roda di Vael Hut (1h 15 'from the mountain station of the Vigo-Catinaccio cable car).

We start the climb with a series of easy steps on the west side of the ridge. We will go up a series of rocks and supported walls which will not present particular difficulties. We continue now in vertical ascent in a excellently aided stretch however decidedly more challenging than the initial sections of the via ferrata. The ferrata in fact climbs initially a supported chimney and then a series of potentially difficult walls and springs but where the equipment helps us a lot in the progression. Now let's go around a corner and then continue into a aided diagonal section with good grips and we finish this first uphill section.

Let's now walk a beautiful one panoramic ledge at altitude followed by a couple of slightly exposed and unaided steps, including an easy chimney. These stretches do not present significant difficulties but in the case of damp rock they must be traced more carefully. We will now have to descend a long aided chimney. If you have traveled the Ferrata Masarè in this direction, this section is technically the most difficult. We will have to be careful to make good use of the various natural and artificial grips paying attention to the narrow spaces in which we will have to pass.

At this point we descend on some aided rocks that do not present any difficulty until we reach a saddle beyond which we ascend on the opposite side. We now walk along some sections composed of an aided path and rocks until a new vertical line descends. Now we cover a stretch of ledge and a traverse exposed after which it is possible to admire the ridge just traveled. We go through a series of steps downhill to which they follow two chimneys well appigliati. The Ferrar Masarè is about to end after a long stretch of ledge where the cable is used as a handrail we reach the point of Finestra Tower (1h 30 'from the start) where we will have two options to complete our itinerary:

The Ferrar Masarè is a varied and demanding via ferrata in some passages. While not presenting technically prohibitive traits, some exposed and cramped downhill sections will be covered and this aspect will require a minimum of experience. If you decide to combine the Via Ferrata Masarè with the ascent to Roda da Vael we will cover a couple of further passages of sustained difficulty (near Pian del Diaol) and therefore require a minimum of experience in aided paths.

As anticipated in the report, the natural continuation of the Ferrata Masarè is the Ferrata Roda di Vael that allows you to undertake a wonderful high-altitude ring route. If you decide to stay in Catinaccio group, you could continue towards the Vajolet Hut and then follow the Via Ferrata to Passo Santner or continue further north in the direction of Catinaccio of Antermoia or of the two challenging via ferratas in the northern area of the Catinaccio: the Ferrata Maximilian and the Ferrata Laurenzi. If instead you wanted to stay in the central part of the Catinaccio group, you could go along the Via Ferrata Bepo de Medil or the Aided path of the Scalette. 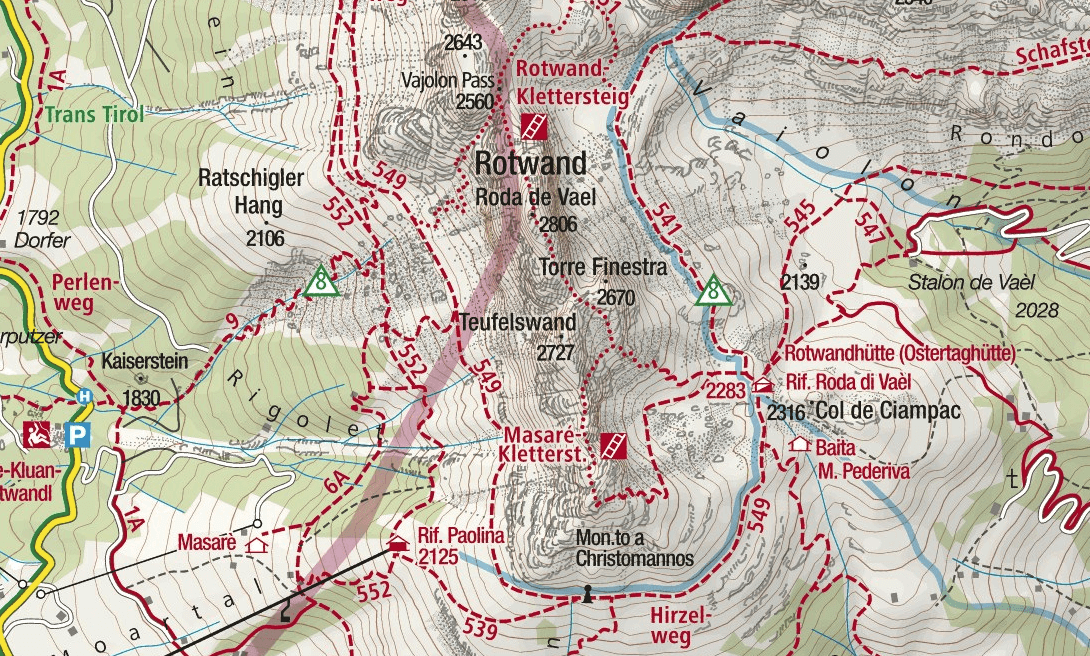 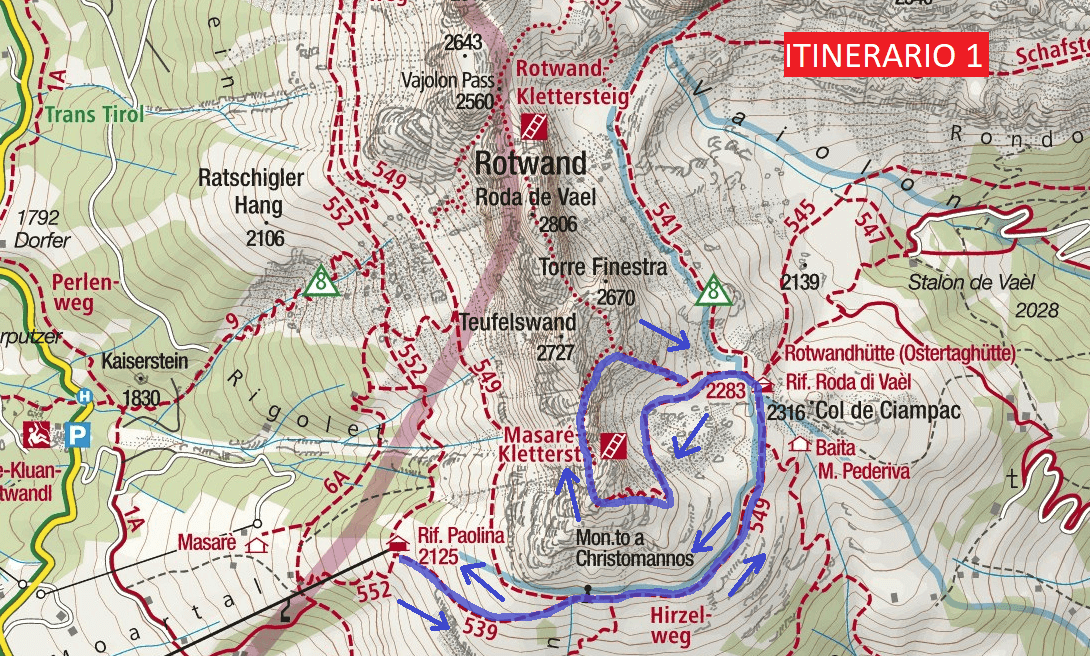 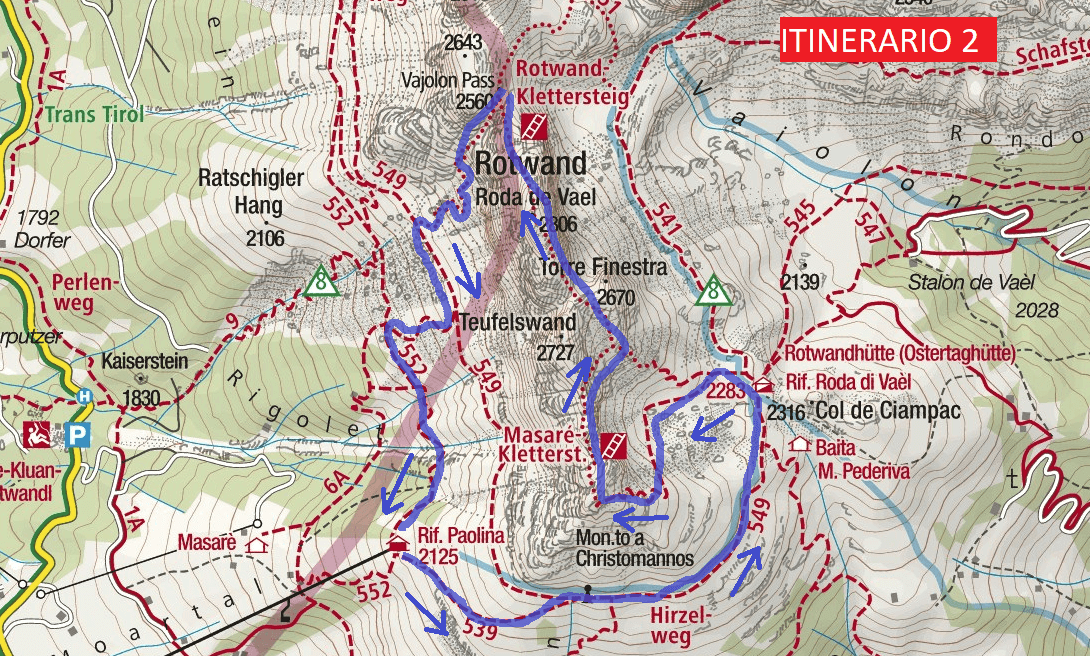 Pictures Ferrata Masarè. The images included in the report were sent to us by the users of the site. If you are interested in sending us photos, use the form on the left or send them to our Facebook page. 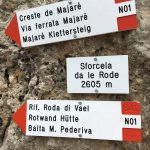 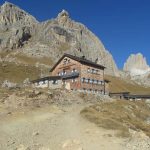 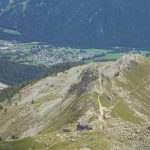 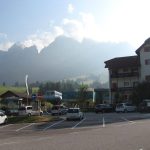 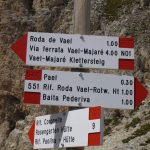 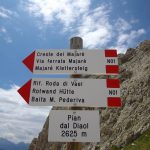 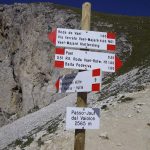 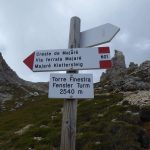 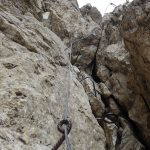 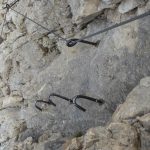 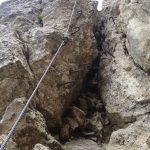