The easy Ferrata Mendola al Roen is a pleasant itinerary practicable for most of the year that does not present particular technical difficulties and is perfect as a route to approach more difficult and complex via ferratas. The ring itinerary can include the interesting aided route of the chamois that extends under the Monte Testa Nera.

The starting point of the itinerary is the mountain station of the chairlift that connects Passo Mendola with the Mezzavia Hut. You reach Passo Mendola generally by exiting the Brenner motorway at Bolzano Sud, take the highway to Merano and exit immediately at Appiano then following the signs for the pass. Once at the Pass, turn left following the yellow signs that lead to the chairlift. Directions for Google Maps available here.
You could also take the path from Tramin as you could follow the forest road that goes up from Cavareno and leads us directly to Malga Roen (dirt road but in fair condition). However, this report considers an itinerary starting from the chairlift's top station.

From the mountain station of the chairlift we come to the Mezzavia hut (1585 m) where following the signs we continue straight ahead taking the forest road (CAI 500). We will remain on the CAI 500 up to Malga Romeno (1773 m - 45 'from the top station of the cable car) ignoring various crossroads we meet for Monte Lira, Crosara, Caldaro and end Selva di Ambei. From Romanian hut there's a crossing of paths where we ignore the CAI 537 which proceeds to the left and the CAI 500 which proceeds straight ahead to reach Monte Roen (normal route) and take the CAI 560 which leads us to the slight slope Oltradige hut (1773 m - 15 'from Malga Romeno - 1h from the top station of the cable car). From this point the trip of the Ferrata Mendola begins.

From the Rifugio Oltradige we immediately meet a crossroads:

From the shelter we continue in steep slope following the indications for the via ferrata and soon we are at the first wire rope. We will travel one ascending ledge to the right on a sandy bottom and a bit slippery after which let's go up some rocky leaps very well set where you can climb without pulling on the cable. Go up this easy part, bend to the left for one second ledge on gravel ground until reaching a short vertical jump. We go up this passage using a bracket and some excellent grips for the feet until we reach the gully coming down from the mountain. We fold to the right and go up again in a series of easy, pleasant and secured passages with wire rope. This trait does not present difficulties and helps us to quickly gain altitude.

We now reach a more exposed and thin wall in which, thanks to a bracket, we are able to continue towards a series of well-appropriated rocky leaps. Dating back in large part the gully we will notice that the equipment bends to the right on an easy and not steep path, but still aided. We continue on this easy ledge, we turn to the left and soon we are at the end of the Ferrata Mendola (2050 m - 45 'from the Rifugio Oltradige - 1h 45' total).

After the via ferrata we continue on the green shoulder among pines and pines to the left in a southerly direction, we cross the normal route (CAI 500) and we climb up to reach the first cross and then the summit of Monte Roen (2116 m - 2h total) from which you can look at the underlying Adige valley and the Dolomites in the distance.

If you wanted to follow a longer and more interesting itinerary, proceed from Monte Roen southwards, staying on the CAI 500 which runs along the wide ridge up to Monte Testa Nera (2030 m). We go down slightly in an easterly direction always on the CAI 500 up to a crossroads where we will keep the left to cover the CAI 560, or the panoramic Via dei Camosci. This path extends mainly in half shore slightly downhill and will lead us back to the Oltradige Hut (2h from Monte Roen - 4h total). The most characteristic passage is one aided ledge very airy on a exposed stretch under Monte Testa Nera. The passage is very suggestive and deserves to be traveled. Once you reach the Oltradige Hut follow the approach path backwards (5h total).

The Ferrata Mendola is definitely a via ferrata suitable for beginners who do not present difficulties or high exposure. It helps to understand the basic techniques and extends within a pleasant itinerary. The passages are generally well gradate and where the verticality increases some brackets come to support.

The Ferrata Mendola al Roen is a via ferrata suitable for neophytes and, although the itinerary is on average long, it can leave us both the time and the energy to travel a second itinerary aided on the same day. Going down the Adige valley, in Mezzocorona we could consider going along the Via Ferrata Rio Secco or the Ferrata del Burrone Giovanelli. Or continuing in the direction of Merano you could take the Via Ferrata Heini Holzer, the easy one Via Ferrata Knott or the difficult one Via Ferrata Hoachwool, these last two in Naturns. 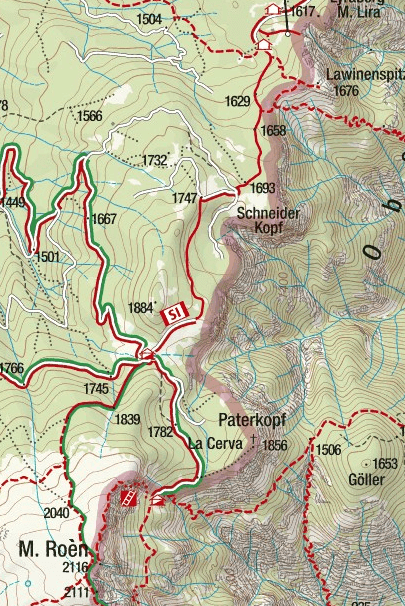 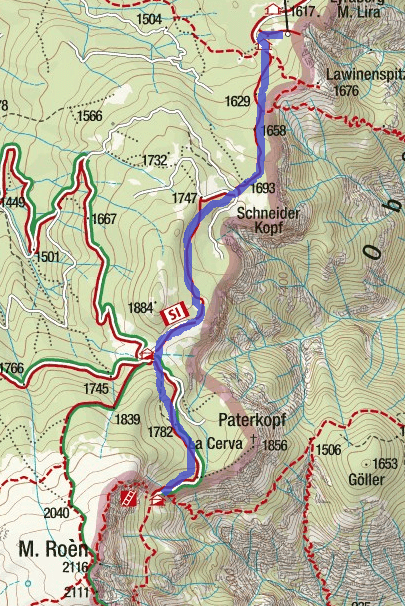 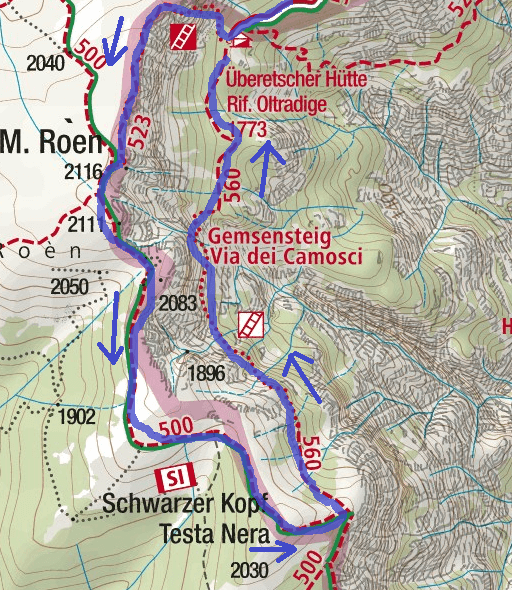 Images Ferrata Mendola al Roèn. The images included in the report were sent to us by the users of the site. If you are interested in sending us photos, use the form on the left or send them to our Facebook page.