The Ferrata Nasego is a via ferrata that extends on 5 distinct sections and is of medium difficulty with some difficult sections. The ferrata is on average exposed and varies in its passages, alternating walls, traverses and ledges, stretches of the ridge with different levels of difficulty. The via ferrata is quite long but it has many points where you can catch your breath and take any breaks. The low altitude makes it practicable most of the year.

The starting point of the itinerary is near the town of Comero near Lodrino, BresciaPast Casto along the provincial road you will notice on the right a road that goes back in the opposite direction to that from which we come. At this junction we will also notice the signs for the Rifugio Nasego with the Corna di Savallo alrready visible above us. We go up this road to a crossroads where the hut is marked, we take to the right, we go around a church and we go up a road that is gradually shrinking. We continue a couple of kilometers on the road that at some point becomes a dirt road but in fair condition. We continue uphill, paying attention to any cars going downhill to where we will park near a clearing with a roof.

From the parking lot we follow the signs for the via ferrata which continue to the right (east) slightly uphill. We soon leave the forest and skirt the base of the Corna di Savallo. We continue until we meet the start of the equipment on our left (20 'from the parking lot).

The Nasego Ferrata is divided into 5 distinct sections:

From the summit cross we continue straight to the west following the path trail. The path descends with a moderate gap until it crosses the escape route and then descends further to meet the Nasego Hut managed by volunteers. From the hut, go down to the car park following one of the possible routes. On the left you can opt for the more direct and steep while on the right the sweeter one goes down. Then we reach the parking lot without problems (45 'from the summit - 4h 15' total).

The rock is often friable and therefore it is necessary to pay attention if you want to climb. In some sections it would be advisable not to fully rely on the rock alone. The via ferrata does not present particularly difficult stretches except for the wall with the plant and the overhanging traverse. The various sections into which the ferrata is divided have many sections in which to rest. Beware of a couple of connection paths that can be slippery in case of humidity after recent rains.

Pay attention to the last stretch where, if you continue along the ledge without noticing the equipment that goes up vertically, you will come to a saddle from which a ridge-aided path leads along the other peaks of the Corna di Savallo. At that point you could climb up the east ridge and reach the cross without having to take the last section of the ferrata.

The Ferrata Nasego is an itinerary that, if undertaken early in the morning, allows you to be chained with another trip in the area. The natural candidate is to continue towards the Ferrate di Casto that develop from the opposite side of the valley behind us as we climb the Nasego. The neighbor Via Ferrata Caspai it could be traveled but it is long and tiring and the time available may not be sufficient. If you moved towards Lago di Idro you could evaluate the Ferrate Fregio and Ferrata delle Ginestre or the Via Ferrata Crench. If one wanted to follow an easy aided path, a good candidate is the Ferrata delle Cascate or the Aided path with the Sperone del Crocefisso.

Traccia GPS per Ferrata Nasego. Itinerary: as per description above. 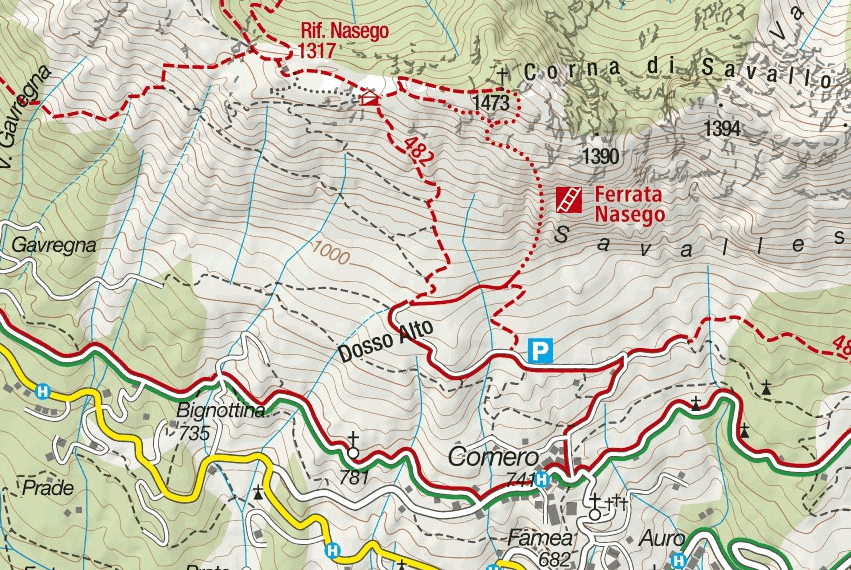 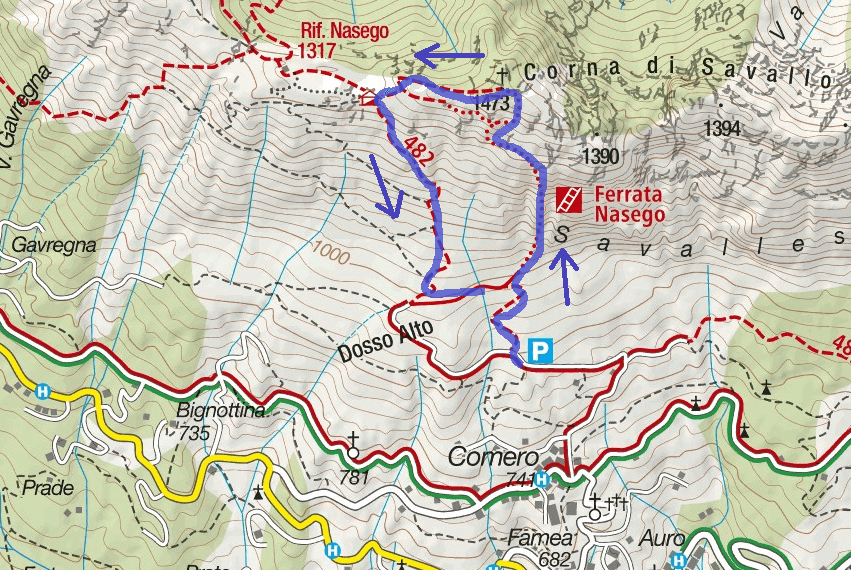 Images Ferrata Nasego. The images included in the report were sent to us by the users of the site. If you are interested in sending us photos, use the form on the left or send them to our Facebook page.