Review of the difficult Ferrata to the north face of Coglians, recently renovated, which takes place in a beautiful high mountain environment on the border between Italy and Austria. Long itinerary with approach of more than 2 hours and return by aided path. Ideal trip to be divided into two days.

The starting point of the itinerary is the Tolazzi Hut in the village of Collina in the province of Udine. To reach the hut you must reach Forni Avoltri located along the road that connects Santo Stefano di Cadore with Comeglians. We are literally close to the Italian-Austrian border. In the town center we pay attention to the indications for Collina, Frassenetto and Sigilletto. We follow the road until the end following the signs for Collina. The road ends in the parking lot of the hut. Directions for Google Maps available here.

Leave the car in the parking area near the Tolazzi Hut (1350 m) we will have to climb towards the Lambertenghi Romanin Hut (1955 m) located just below the Volaia Pass still in Italian territory. We climb along the Sentiero dei Cramars with trail marker 144. The trail initially climbs on a comfortable forest road. As we go up the forest becomes a path that climbs more steeply but never with excessive effort. Possibility to follow a signed shortcut. The trail now climbs in a more open environment surrounded by walls and slabs. We ignore the deviation to the right for the Sentiero Spinotti (path 145) which we will use for the return e continue until you reach the Lambertenghi Romanin hut (1h 30 'from the parking lot).

Leaving the hut, we climb up to the nearby Passo Volaia (1974 m), a state border with the view that opens onto the beautiful Lago Volaia. We continue slightly downhill until we reach a saddle: on the right, the lake wanders more quickly, on the left the path is more comfortable and allows you to reach the Austrian hut Pichl Hutte (1959 m - 10 'from the hut on the Italian side). To shorten the route we keep the track on the right of the lake and we take the path 403 that goes eastwards uphill surrounded by pleasant grassy slopes on which sprout above the peaks of the Carnic Alps. We continue uphill on a stony ground in the direction of the Valentintorl saddle with the first signposts for the ferrata with the Austrian wording: "Weg der 26ger" with trail marker 427. Attention, we will have to take the right path with respect to the rocky spur to the left of which is the saddle of the Valentintorl. This junction is not very well signposted and care must be taken when cutting to the right towards a saddle (2147 m) while the Valentintorl saddle remains on the left.

We bend south along path 427-1 and some sporadic blue marks and soon we are under one wall of fifty meters to be traced. It is not the real ferrata, but the prelude. We climb without obvious difficulties and descend on the opposite side and we are on scree, depending on the season can be snow-covered, under the impressive north face of Coglians along which the ferrata extends. We therefore reach a signposted junction where we ignore the track that leads to the left a new ferrata with trail marker 427-2. We follow the track reaching the start of the via ferrata indicated by aunusual blue arrow on a metal slab (2276 m - 2h 30 'total).

The Ferrata del Coglians is particularly challenging in the first 150 meters. The route in this section is vertical, it varies in the type of passages with a marked athletic vein that advises to measure out the energies well. Although there are some metal frames in this first section, these are not positioned either excessively or superfluously.

Thestart gives theidea of difficulties level that we are going to face. We face a high vertical wall in which some gullies descend vertically. The cable climbs them going to look for a logical ascent line despite the small presence of support points for feet and hands. With a some effort we gain the first vertical meters to fold slightly to the left and put us in a groove. We earn from immediately exposure and we use a providential first peg in a slightly overhanging passage. We always climb on a vertical line reaching a first rocky roof that we go around to the left in a diagonal challenging traverse. We bypass this obstacle and find a small terrace where to take breath. The wall, without respite, continues vertically reaching in short a second rocky roof which, similarly to the previous one, we bypass left with a traverse. This traverse is however horizontal and is tackled by using some pegs for the feet that make the passage decidedly airy and adrenaline. We go around an edge and we find ourselves in a groove with the first vertical meters again for then become more supportive.

We are now in one of the most characteristic passages of the route and probably the most challenging. We are again under a rocky roof that we will go around with a traverse to the left. This is longer than the previous ones and takes place on one smooth and often damp slab. We go around the roof in complete adherence with boots on the smooth rock and, looking for unnecessary delay, we go around the edge and with a couple of tractions we go out of the most difficult stretch of this passage. We continue in vertical ascent on the rock until you reach a small terrace where it is possible to breathe again.

Now let's continue going up one more series of vertical passages separated with some more leaning passages and others going up short gullies. After a series of these passages of medium difficulty we reach a new challenging passage which consists of a crosswise similar to the previous one. We cut on the left a roof always on poor support slab e we go up again on the opposite side. We continue with some steps to reach a stretch where the equipment momentarily ends and with it also the first difficult part of the route. To our left the summit del Coglians begins to appear less distant and we climb on gravel and stones up to meet again the metal equipment.

The wire rope begins with a series of fairly vertical but stepped rocks followed by a series of leaning passages where it is possible to climb and climb without too much difficulty. The rock in this section is less smooth than the previous section and there are more grips. Attention, however, that gravel and pebbles are present in more than one part so you do not need to move them to avoid problems for those who follow below. We reach a last vertical stretch that runs up a gully in good exposure beyond which we reach thecoveted ridge (ca 2700 m - 2h from the start) which acts as a watershed between the north and south walls of Coglians as well as from the state border. Below us clearly visible the Volaia Pass, the Antonin Hut and the approach path already traveled.

We start along a rather wide ridge on a rocky ground to move gradually over the ridge. The summit seems close, but a certain amount of patience and concentration will still be needed to climb a series of exposed however not overly difficult steps. As we go up the passages along the ridge we move south and we reach an intermediate point in the ridge with the peak clearly visible. Start the last section of the route with a series of stepped steps and well climbable that lead us to the summit of Coglians (2780 m - 1h from the ridge - 3h from the start - 5h 30 'total) where there is both a metal cross that one bell. Wonderful view from the summit over the Carnic Alps, the Austrian chains up to see the King of the Dolomites in the distance, theAntelao.

Near the summit bell, follow the trail that descends along the normal ascent route. The descent via the normal route starts on one series of rocks well marked for then reach a scree. We are now in Italian territory and with trail marker 143. The steep descending path is well beaten and we will reach a crossroads (2330 m - approx. 45 'from the summit): straight on we proceed to Forcella Monumenz then to the Rifugio Marinelli, we will keep the right to reach the Aided Spinotti Path and then return to the Lambertenghi Romanin Hut. We follow the directions that lead us back to the right with signpost 145 and we start the Spinotti path.

The Sentiero Spinotti has some aided sections. We meet a curious stretch of descent on slab with wooden steps placed directly on the rock. Let's proceed meeting a ledge to then reach a chimney that we initially descend on one solid metallic ladder, then using a rope which follows the red and white markings and allows us to descend the exposed external wall. We then continue on the path until we reach the path just below the shelter reached in the morning (2h 30 'from the summit). We graft on the wide path already approached and then we return to the Tolazzi Hut where we parked (1h from the graft - 3h 30 'from the summit - 9h total).

The Ferrata on the north face of Coglians takes place in Austrian territory. It may be useful to remember the Austrian name of both the ferrata (Weg der 26er) and the Coglians itself (Hohe Warte), since after the border we will follow the local signs. The term Weg der 26er refers to the twenty-sixth Austrian Spittel Battalion which built this historic via ferrata in 2000.

The ferrata extends in a severe and high mountain environment. When approaching it is easy to come across snowfields both in the gully ascending to Forcella del Valentintorl and in the scree up to the start of the via ferrata. The first section of the route is difficult and at least a couple of passages are to be considered "Very Difficult" especially in the case of (frequently) wet rock. It is essential to measure the energies well in the first section to get to the key passages that, due to the type of passage and the rock, require strong traction on the cable. Ferrata very exposed in the first part.

The climb to Coglians goes very well to be divided into two days so you can reach a shelter where you can stay overnight and take the demanding climb of the via ferrata, rested. Staying in the Carnic Alps there are many rather challenging aided routes. Always near the Italian-Austrian border we meet:

Further south than the border, we meet the Ferrata 50 of the Clap, the Via Ferrata Adventure Climb and the Via Ferrata Cassiopea otherwise towards Tolmezzo the recent Via Ferrata la Farina del Diavolo a Villa Santina.

Traccia GPS per Ferrata del Coglians. Itinerary: as per description above. 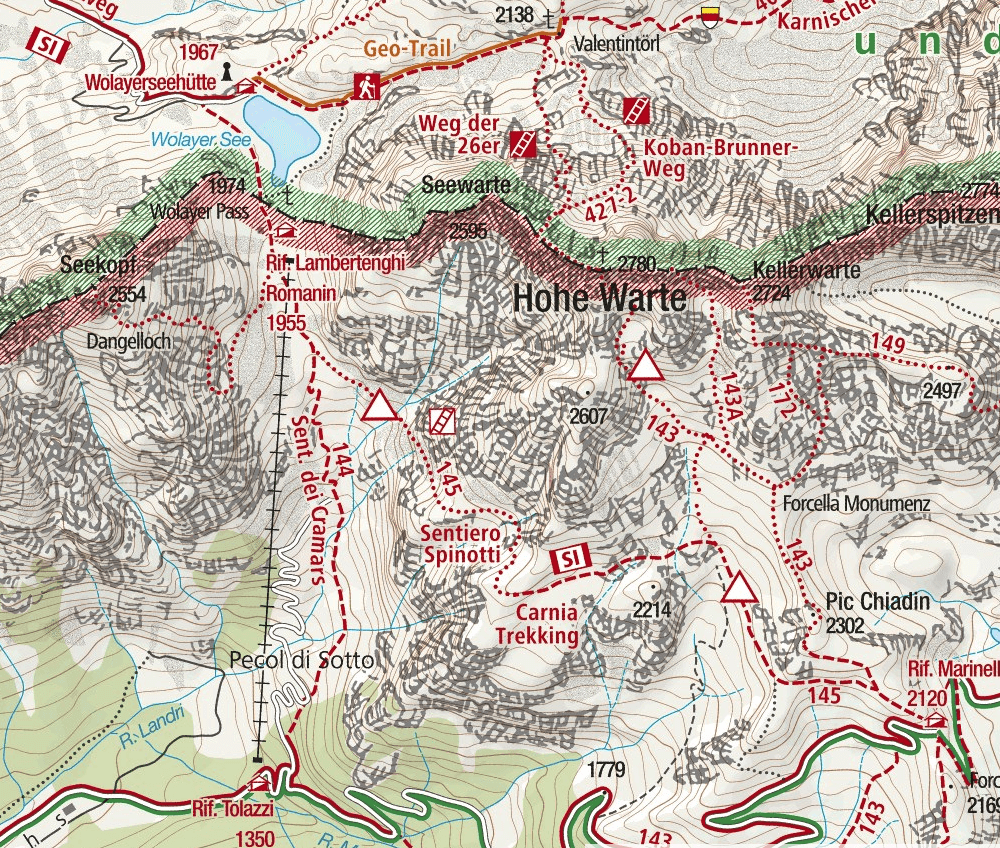 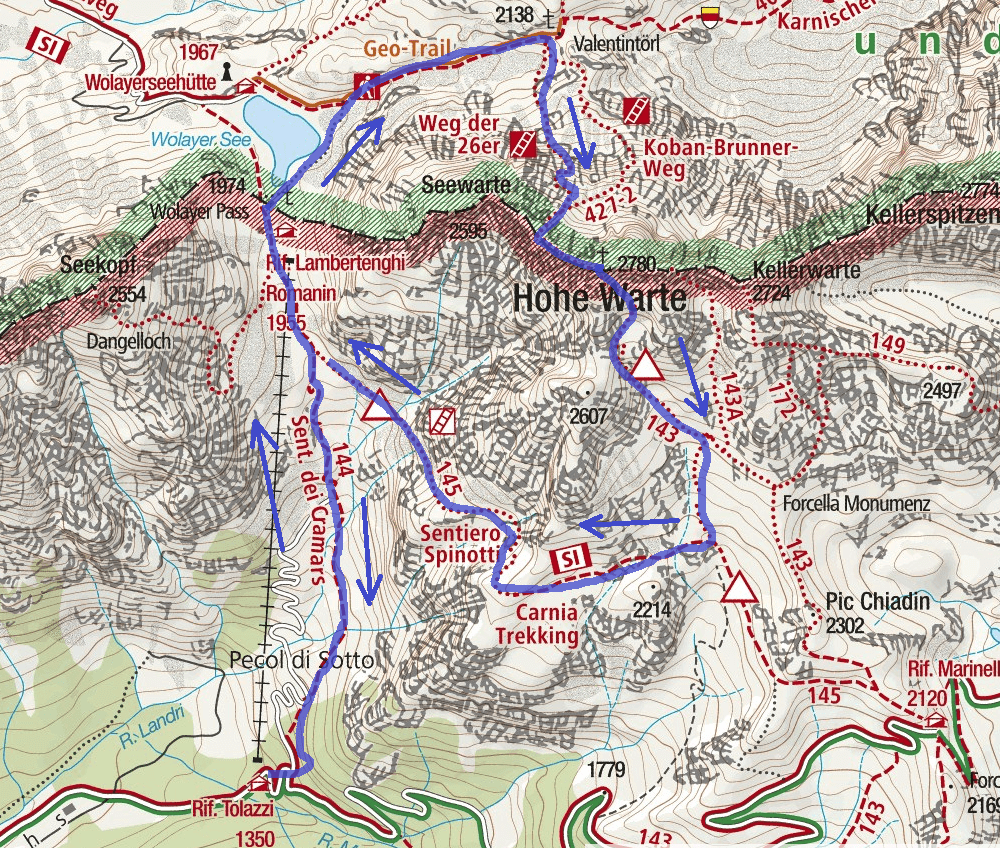 Images Ferrata del Coglians. The images included in the report were sent to us by the users of the site. If you are interested in sending us photos, use the form on the left or send them to our Facebook page.