Via Ferrata Schuster at the Sassopiatto

The historic Ferrata Oskar Schuster is a partially aided route ascending to the top of Mezzo del Sassopiatto, in the Sassolungo group. The itinerary is on average difficult in the aided sections, however, it presents a discrete development even in free sections at the beginning and at the end of the itinerary. The environment is high in the mountains and must be covered with good weather as there are no escape routes inside the climb.

The starting point of the itinerary is the valley station of the cable car that from Passo Sella leads to Toni Demetz. To reach Passo Sella you can go up both from the Val di Fassa (Canazei) that from Val Gardena (Selva). Directions for Google Maps available here.

Given the itinerary it is strongly recommended to climb the first difference in height from Passo Sella (2180 m) to Rifugio Toni Demetz (2685 m) with the cableway. Alternatively you can follow the CAI path 525 which reaches the hut in about 1h 30 'leads us to the Forcella Sassolungo.

From the Demetz hut we continue in steep descent on the CAI 525 that in the valley leads us to the Vicenza hut (2253 m - 45 'from the mountain station of the cable car). Let's continue now leaving the hut behind us continuing inside the detrital basin of the Sassopiatto in the direction of the highest point of the cone formed by a steep gully where the start of the Schuster Ferrata is located (45 'from the Vicenza Hut - 1h 30' total). Before arriving at the first wire rope we will have to go up a few rocks following the directions in red paint on the rock

The first wire ropes are located near one inclined ramp with which we bypass a rocky edge (2550 m). After this short stretch, the equipment stops and we continue the climb which will be characterized by an alternation of sections aided with pieces to climb for free. We climb a few rocks and meet the second piece of rope that helps us remount a more pronounced vertical jump. We enter a gully to be climbed by climbing on the easy natural steps following the red signs until you meet a new more pronounced vertical jump where we climb with the help of two brackets. The aided stretch continues on an easy but exposed cross to the right. We continue the climb on aided cable for inclined ramps and not difficult rocks. Continuing in this stretch we climb a wide valley composed of easy rocks where it will be pleasant to climb without using the cable. We now reach the most vertical point of the itinerary that climbs a wall of about thirty meters with excellent natural grips and safety rope. This stretch leads us on a wide saddle where it is possible to stop before resuming the itinerary.

We cross the saddle to start in a new vertical section where we climb a vertical wall without any grips taking advantage of one series of solid brackets first and then a metal ladder. We continue the climb in this section well aided up to take us inside a groove not difficult to climb. We climb around an edge and then go up the climbing rocks to take us to one of the most iconographic points of the climb: the Forcella delle Torri (2730 m - 1h from the start). Let's now go on one comfortable ledge at high altitude that goes around the south face of Sassopiatto until it reaches a short aided jump which leads us to a long gully where there are no facilities. The passages are free and, although not difficult, they must be well calculated given the present debris. We reach the final part of the gully where it narrows until it becomes a crack in the rock that leads into the broad summit ridge with which we reach the summit of Mezzo del Sassopiatto (2955 m -1h from Forcella Due Torri - 2h from the start - 3h 30 'from the mountain station of the cable car).

We go down on the opposite slope in a long descent on the west slope initially on a path on a rocky bottom which then becomes wide and without difficulty until we reach the Rifugio Sassopiatto (2300 m - 1h from the end of the ferrata). We will now keep the CAI 557 trail that will comfortably take us first to the Sandro Pertini Hut (2316 m), then to the Rifugio Federico Augusto (2298 m) and then near the Col Rodella from which following the clear directions we reach the parking lot (3h from the end of the via ferrata - 6h 30 'total).

The Schuster Ferrata at the Sassopiatto is an old-style via ferrata. It does not present high-level technical difficulties and allows us to reach a very respectable peak by going up a slope more difficult than the normal route - invaded in the summer period by many tourists. The route is very pleasant and climbable both in its aided sections and in those in free. The passages in free, if crossed on dry rock, do not present particular difficulties being included between the I degree (the great majority) and the II degree (some isolated). Exposure is generally not excessive. Beware of snow-covered stretches until quite late season.

The Schuster Ferrata extends on the Sassopiatto where there are no other aided routes. However from the starting point of the itinerary - Passo Sella - you can climb the short one Ferrata to the Col Rodella or the demanding trip to the Via Ferrata of Mesules. Descending into Val Gardena we meet the Via Ferrata Sass Rigais, the Ferrata Tridentina, or the Ferrata al Piccolo and at Grande Piz da Cir. Not far from Passo Sella, you can reach the Pordoi Pass and take the very difficult Ferrata Piazzatta.

Traccia GPS per Ferrata Schuster al Sassopiatto. Itinerary: as per description above. 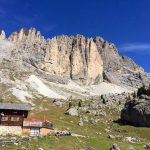 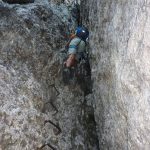 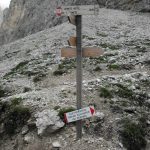 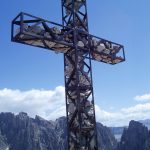 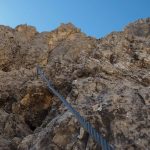 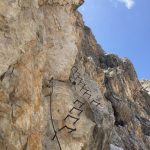 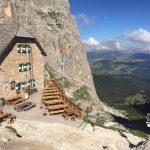 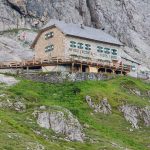 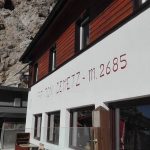 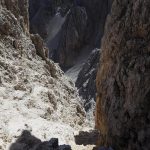 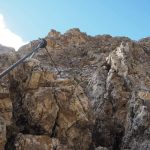 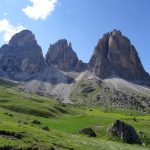 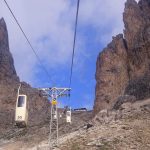 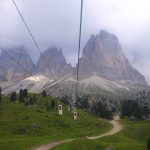 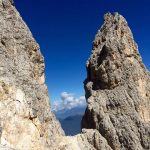 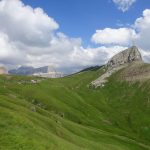 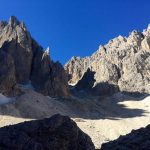 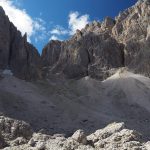 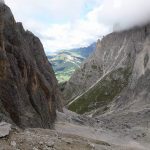 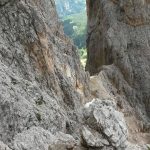 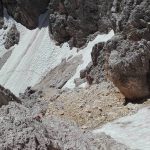 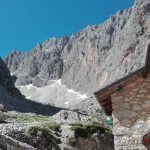 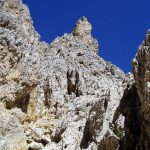 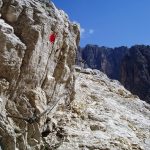 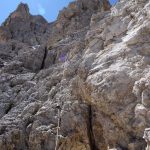 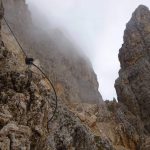 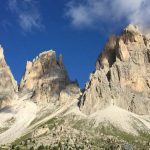