The Ferrata Ottone Brentari is a ferrata that connects the Huts Pedrotti and Agostini following a path without significant technical difficulties under the Cima d'Ambiez. This via ferrata can be traveled in both directions although if you follow it in the direction of Agostini-Pedrotti you will have the opportunity to follow it uphill and enjoy the best views along the way.

The itinerary that we propose in this report runs along the Ferrata Brentari towards Rifugio Agostini - Rifugio Pedrotti. This route could be traveled in the opposite direction or in combination with the Aided path of the Ideal in a Rifugio Pedrotti itinerary - Rifugio XII Apostoli.

Considering in this itinerary to undertake the via ferrata from the Agostini Hut, we propose as departure the Ristoro Dolomiti Restaurant (768 m) above Dorsino. In the center of the town we will notice a well-marked road with a brown "Val d'Ambiez" sign ascending towards the Brenta massif. We cover this paved but not wide road that goes up along the narrow valley to the restaurant where it is possible to park. Our itinerary will start from this point. Directions for Google Maps available here.

From the parking lot of the restaurant (768 m) we climb the comfortable CAI path 325 in the direction of the Rifugio al Cacciatore ("Hunter's hut") (1820 m -2h 15 'from the parking lot). This path is initially a dirt road and then becomes a path. From the Rifugio al Cacciatore we can continue on CAI 325 (Sentiero Dallago) which in about 1h 30 'will take us to the Agostini Hut (2410 m - 3h 30 'total from the parking lot). This route of approach, besides being long, will lead us back up an important drop (1700 m) and this must be taken into consideration for the development of the trip. It may make sense to stay overnight in one of the shelters to then follow the itinerary at rest.

Departing from the Agostini Hut we continue in a northerly direction going up the valley that leads to the Bocca d'Ambiez. Let's move on crossroads with CAI 321 (Ferrata Castiglioni) which branches off to the left and we continue uphill keeping the left side of the valley facing some easy aided sections, mainly composed of rocks and ledges. We then come to the Vedretta d'Ambiez (2800 m - 45 'from Rifugio Agostini) where the straight path continues uphill from CAI 304 towards the Bocca d'Ambiez and the Aided path of the Ideal, we will keep the right crossing the glacier. The difficulties of this part are certainly related to the amount of snow and its stability which varies from year to year. We cross the glacier following some singular red flags to take us to the right side paying attention when we get close to the edge to the stability of the glider.

We then reach the start of the Ferrata Brentari with a red sign for safety measures. We climb a first wall supported by some large metal brackets beyond which we continue on an upward traverse to the left. We climb another set of metal steps until we come to a signpost where on the left we proceed in the direction of the Bocca d'Ambiez and the Aided path of the Ideal while on the right uphill on steps the Ferrata Brentari continues. In this stretch of climb we quickly gain altitude and increase the exposure although the passages are never particularly difficult. Continuing uphill we meet a metal ladder initially vertical then more supported. We continue now on some easy rocky jumps aided up to meet a wide ledge to the right beyond which we continue on easy rocks. In this section, if we turn around, we can observe the Vedretta d'Ambiez with the two paths that come off: one goes down towards the Agostini Hut and the other goes up towards the Bocca d'Ambiez. After some easy rocks we cover a second ledge beyond which we face one set of metal stairs quite supported. We continue uphill in an easy stretch and reach a short ledge beyond which we meet a new staircase. We travel one long ledge with which we come to the Bocca di Tosa (2845 m). This long ledge leads us to the last ladder of the hike we take downhill. We go around a rocky edge and, where once we crossed a wobbly suspension bridge, we cover a short and exposed ledge beyond which we are at the Sella di Tosa (2860 m - 45 'from the start - 1h 30' from the Agostini Hut - 5h total) .

The Bretari Ferrata ends at this point and now we will have to get off at Rifugio Pedrotti. We go down on visible traces of path in the direction of the impressive bastion south wall of Cima Tosa with a wonderful view over the Campanil Basso and the Sfulmini. We go down some rocks not aided and we carry on the left side of the Vedretta di Tosa from where we go down without particular worries facing some snowfields. We will have to go up a short distance beyond which we will meet on the left before the junction for the Aided path Apolloni and then for the Palmieri path both valid options for the return (read below) or continuing on the CAI 304 downhill we go around Cima di Brenta Bassa and we reach the Pedrotti Hut (2491 m - 1h from Sella Tosa - 2h 45 'from the Agostini Hut - 6h 15' total).

The Ferrata Brentari ends well before the Rifugio Pedrotti. If you do not want to reach the shelter you could undertake the Aided path Apolloni (CAI 320B) that 20 minutes before reaching the Pedrotti is detached on the right. This aided path, which is exposed but not difficult and has been recently aided, allows us to stay at high altitude and reach Passo Forcoletta (2433 m) from where we can descend to Rifugio Cacciatore (2h 15 'from the end of the Ferrata Brentari - 8h 30). From the Cacciatore hut we continue downhill to the Ristorante Dolomiti (10h total).

If you want to reach the Rifugio Pedrotti, you will walk the stretch between the Apolloni Aided Path and the hut in reverse, adding an hour to the itinerary for a total of 11 hours.

The Ferrata Brentari is a via ferrata not particularly difficult from a technical point of view but quite exposed in the section that goes from the Vedretta d'Ambiez to the Sella Tosa. The crossings of the glaciers require attention and the crampons are certainly an advisable option even in late season. Like many others via ferrata in the Brenta Dolomites lends itself very well to being combined with other itineraries.

The Ferrata Brentari has a long approach regardless of the route chosen to approach. From this point of view it could make a lot of sense to combine it with other aided routes in the area. Surely a rewarding possibility is to follow it in the direction of Pedrotti - Rifugio XII Apostoli (joining Brentari the Aided path dell'Ideale) - Rifugio Agostini (using the Via Ferrata Castiglioni) - Rifugio Pedrotti (using the Apolloni Aided path). This trail is certainly very interesting but it needs to be broken with at least one overnight stay at high altitude.

If you want to take another type of route, go along the Brentari and upon reaching the Rifugio Pedrotti we could head towards Bocca di Brenta to go along the Via Ferrata Bocchette Centrali and eventually return to Pedrotti with the recent one Via Ferrata Spellini and Aided path Orsi.

Among the other suggested itineraries in the Brenta Dolomites, we indicate the Ferrata delle Bocchette Alte with his continuation in the Via Ferrata Benini, the Sosat Aided Path and the Via Ferrata of the Val Gelada in the northern branch of the group.

Traccia GPS per Ferrata Brentari. Itinerary: as per description above. 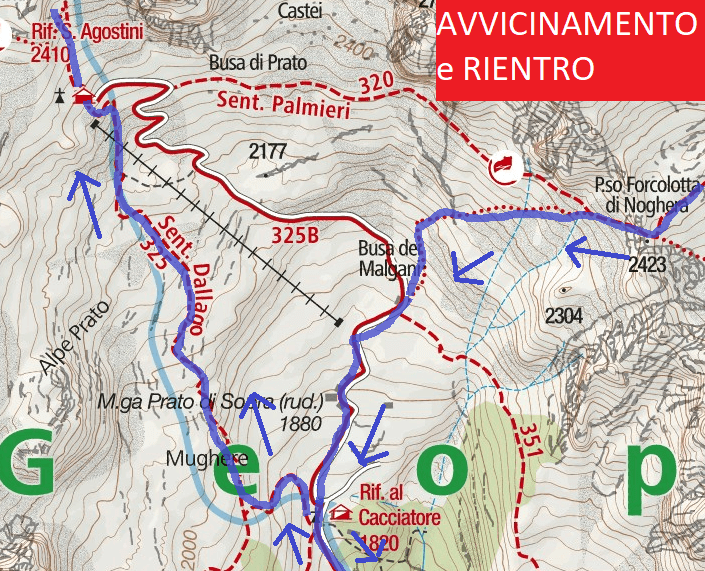 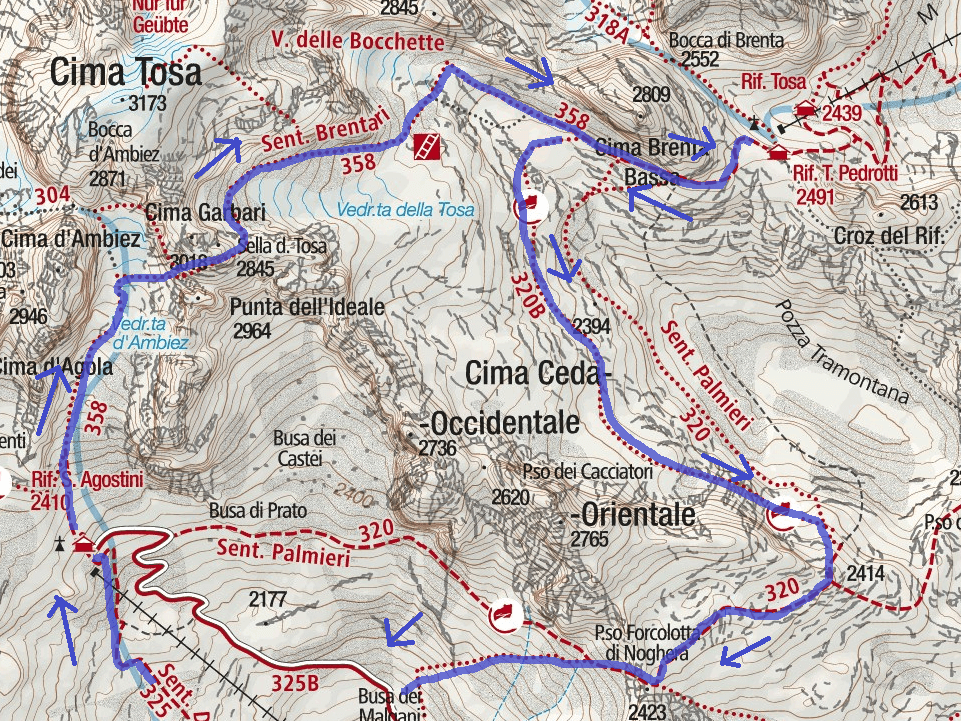 Images Ferrata Brentari. The images included in the report were sent to us by the users of the site. If you are interested in sending us photos, use the form on the left or send them to our Facebook page. 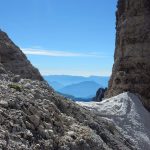 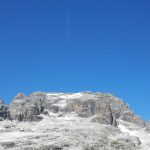 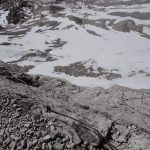 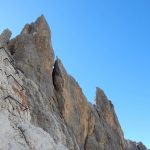 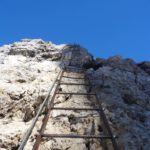 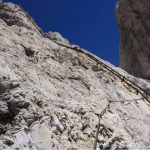 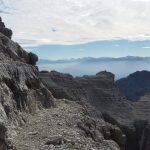 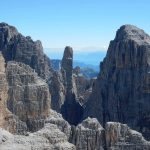 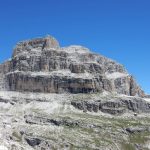 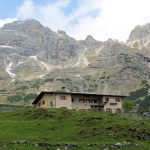 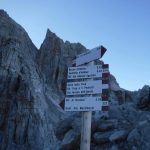 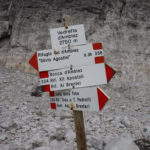 Webcam Ferrata Brentari in the locality of Madonna di Campiglio.