Via Ferrata of the Val Gallina Crag

Review of the two ferratas present at the Val Gallina Rock Gym. Both the climbing routes climb up the rocky bastion of the rock wall. The Ferrata A is easy despite the high exposure. The Ferrata B is instead difficult with at least two passages that require a minimum of technique and strength in the arms. Short and excellent itineraries for training even in winter. In 2019 a third difficult and athletic C via ferrata was opened.

The starting point of the itinerary is the parking of the Val Gallina Rock Gym, also known as the VII Alpine Regiment. To reach the parking lot you must reach Soverzene in the province of Belluno on the eastern side of the Piave. Coming from the south you reach Soverzene from Pian di Vedoia and then cross the bridge over the Piave. We pass next to the power plant - starting point of the neighbor Via Ferrata Parete dei Falchi - and you reach Soverzene. We continue towards the north leaving the town and entering via Val Gallina. We reach a saddle near a small religious building. Keep left towards Longarone. In a few hundred meters we meet the signs for the parking of the rock gym. Directions for Google Maps available here.

The approach to the via ferrata is very short. We follow the signs in the parking lot towards the clearly visible wall straight to us. We cross a stream and soon we will have before us the choice of which way to go:

As indicated before, we continue to the left for about fifteen meters. We climb on a ramp for about ten meters diagonally and then climb on a vertical and rather difficult rock wall but where numerous pegs and brackets help in the progression making the wall simple. We face a new ramp to the left that leads us under the probably more challenging passage of the ferrata A. We climb a well-aided but vertical and exposed gully. We follow a new narrow and aerial ledge towards the left and a not difficult chimney. We cross a traverse to the right and after a few harmless jumps we reach the end of the ferrata (15 'from the start - 30' from the parking lot).

From the clearing where on the left we proceed by the Ferrata A, we set off to the right downhill to the stream where there is the start of the via ferrata. After the first meters of cable diagonally, go up vertical after going 4 meters vertically to face a steep section. The rock spells and the cable rises to the right of the ledge while the major natural and artificial holds (brackets) are on the left side. Proceed rapidly and without too much delay in the 3 meters overhanging to get out of the difficult passage. We leave the passage on a small balcony where we can observe the stretch just ended.

We climb a short connecting section on rocks that gradually bends to the left to bring us under a chimney. The cable starts initially on the left side of the chimney and then passes to the right side where we will go up the chimney. There are some brackets and some useful natural supports. We leave the chimney, cross 3 meters to the right diagonally and reach a long series of metal cambras with which to go up a smooth wall. We leave this vertical section in a narrow ledge that we follow to the left.

Finish the ledge near a short dihedral. Let's go back up and get ready to start the key passage of the route: a challenging traverse. The first section of the traverse goes up a rocky roof where, with the aid of some pegs, we turn a corner. We now meet the traverse that initially appears horizontal, aerial and on very smooth rock. After the challenging cross the cable rises diagonally inside a crack (good grips for the feet) and then diagonally to the right. Straight to us we see a new series of metal bracketa. Before reaching them we have to go through a new challenging upward traverse to the right. We cover it and find ourselves under a vertical, slightly overhanging wall, aided with brackets and pegs.

We leave the key passage of the route and we find ourselves on a more supported wall where again a cambra and some pegs help us in the climb. We are now in the last section of the route. We find ourselves under a new long wall that we will climb facing two long series of metallic brackets connected by a short diagonal cross of 3 meters. We climb the second series of pegs and the cable bends to the right in a mixed ground and rock ramp with which we go around an edge and finish the via ferrata (30 'from the start - about 50' from the parking lot).

Report in preparation. Video of the route is available for this link on our Facebook page.

The return is via the trail on the left that goes down to the starting point and then back to the parking lot (20 'from the end of the via ferrata).

For via ferrata enthusiasts, a possible recommended route is the ascent of the Ferrata B and the descent of the Ferrata A. The Ferrata B is certainly the most difficult of the two on this itinerary. Some of the passages present are not to be underestimated: the initial overhanging section, the chimney, the traverse. For this reason we decided to classify the route as "difficult" despite its brevity. The Ferrata A does not present difficult technical passages although it is definitely exposed.

The via ferratas have recently been re-aided and the ropes and equipment are in good condition with a very wide cable although not always taut. However, a stretch of the B ferrata is currently (2017) unstable, with a taproot attached to a piece of rock that is peeling off and caution is needed.

As indicated in the paragraph on the starting point of the itinerary, the Ferrata della Val Gallina is located near the Ferrata Parete dei Falchi. Given the short duration of both the itineraries, they are excellent to combine in the day as well as return from the northernmost ferrate. Continuing north towards Longarone we meet the demanding one Via Ferrata of Memory at Vajont. In the eastern direction we meet the Ferrata Costacurta or theAlta Via dei Rondoi while to the west on the Schiara group we encounter some challenging fixed-rope routes: the Sperti, the Berti, the Mormol and the Zacchi.

Images Ferrata Val Gallina Rock Gym. The images included in the report were sent to us by the users of the site. If you are interested in sending us photos, use the form on the left or send them to our Facebook page. 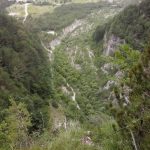 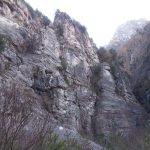 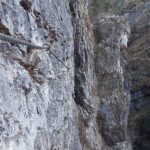 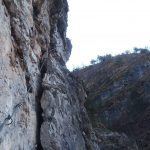 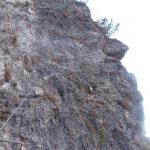 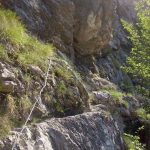