The Via Ferrata of Rocca Clarì in Val di Susa is likely to be one of the most challenging route in Piedmont. It is hard from a physiocal point of view as well it varies a lot in its passages: you will find vertical walls - both aided and not - climbable passages, aerial streches, traverses, short parts to climb downwards all across a long corner of marvellous rock. It is not ideal for people with no experience and it requires good physical shape.

The starting point of the itinerary is Claviere in the upper Val di Susa in the province of Turin. There are two approach options:

In the case of the second approach (preferable if it joins the Ferrata dei Militari) continue in the direction of the Tibetan bridge ignoring its start and descending along the stream, cross it and follow the path until you see the start of the Ferrata di Rocca Clarì (15 'from the parking lot).

Each of the 15 sectors into which the Ferrata Rocca di Clarì is divided has a sign with a name that distinguishes it. Here they are one by one:

Descend along a path that is not very marked towards the west above the summit of Rocca Clarì until it reaches some military posts. Go down a dirt road towards La Coche where the ski lifts are and still downhill towards Claviere. Just before reaching Claviere, turn right, cross a ski lift and take the path to the Gorge of San Gervasio. You reach the Tibetan bridge where, based on where we left the car, we will choose:

The Ferrata is optimally aided with cleverly positioned brackets, not too invasive. The itinerary is very varied and requires a good state of form and experience of via ferrata.

There is the possibility to rent the equipment for the via ferrata at the Tibetan bridge ticket office (for directions here).

The Rocca Clarì Ferrata can be combined with the Ferrata del Bunker or Military Ferrata which extends on the opposite side of the long powerful Tibetan. The Claviere also extends the Ferrata of the Batteria Bassa and the Via Ferrata of Chaberton.

Images Ferrata Rocca Clarì. The images included in the report were sent to us by the users of the site. If you are interested in sending us photos, use the form on the left or send them to our Facebook page. 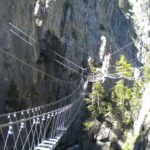 Weather Ferrata Rocca Clarì in the locality of Claviere (Turin).