The starting point of the itinerary is the village of Preore near Tione di Trento. If you arrive from Trento or from Riva del Garda just before reaching Tione, in a roundabout there are signs to the right to go up to Preore. As you enter Preore on the left there are signs for Passo Daone and Larzana. After the first bend, we park the car near a picnic area in the nearby climbing wall.

From the parking lot we head towards the rock climbing area where two paths start. We will hold the right while the left path will be our return. We follow some strenuous wooden steps and reach the start of the via ferrata with the white plate (5 'from the parking lot).

The via ferrata begins with a diagonal traverse to the left where we bypass an easy edge. After the corner we go back to an easy stretch of steps below the most challenging section of the route. Here we have to go up a vertical wall to the right which has good natural grips, although perhaps a little distant from each other. We go up this stretch and arrive under an easy dihedral beyond which there is vertical wall with some metal brackets in support. After the vertical wall we begin a series of rocks beyond which ends the first part of the street characterized by greater verticality than the rest.

We now continue on path sections and ledges without difficulty and where exposed these are insured. This is a stretch characterized by many works of art along the way. We climb the forest path until we reach a characteristic stair that passes between two narrow rocky walls until we reach a panoramic balcony over which the path descends and the second aided part begins. This is characterized by a long horizontal traverse on rock. The traverse as it is easy to imagine is exposed, however there is good space for the feet and some steps on the rock help the progression. We go around an edge and end the crossbar after which there is a short vertical section to be traced. We continue on the path along the wood reaching a bell. Here begins a new not difficult traverse to the right beyond which is the book of signatures. We continue the path with a well-aided vertical wall and a traverse to the left to the left. We continue with the path and now we face a couple of not difficult downhill sections. We go down along the path in ther forest always surrounded by wooden sculptures and other particular works but in fact the ferrata and with it the equipment is finished (1h 30 'from the start - 1h 5' total).

Continue down the path until you return to the rock gym and then to the car park (10 'from the end of the equipment - 1h 45' total).

This pleasant via ferrata develops at low altitude and lends itself well to being traveled practically all year. The route is characterized by many works of art, mainly wooden sculptures from which it takes the name "artpinistico". The ferrata concentrates the technical difficulties in the first section.

The Ferrata di Preore is a classic itinerary that can be combined well with other via ferrata in the area that we may have approached shortly. Continuing in the direction of Trento we will encounter the two difficult ones Via Ferrata Pisetta and Ferrata Segata, both reserved for experienced hikers and well-trained physically. Going down the level of difficulty but with a very long itinerary we could proceed towards the Via Ferrata Che Guevara. In the direction of Riva del Garda we also meet the easy one Via Ferrata Rio Sallagoni or the Via Ferrata Colodri and the recent Ferrata Signora delle Acque.

Traccia GPS per Ferrata di Preore. Itinerary: as per description above. 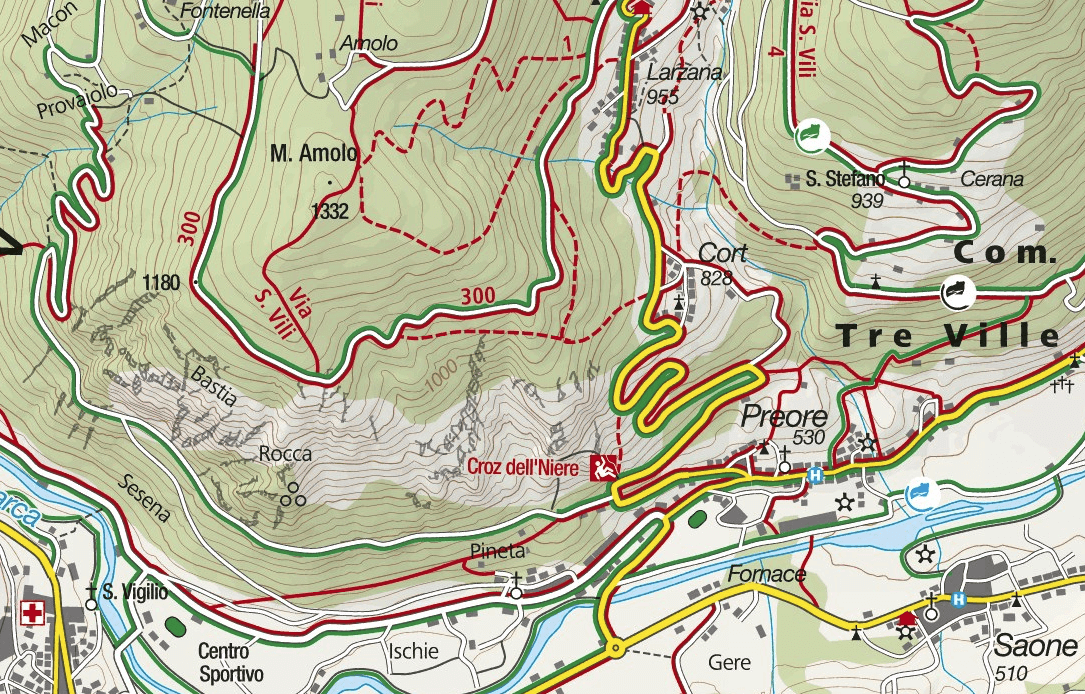 Images Ferrata di Preore. The images included in the report were sent to us by the users of the site. If you are interested in sending us photos, use the form on the left or send them to our Facebook page.