The Punta Penia Ferrata climbs the western ridge of the Marmolada allowing to reach the highest point of the group. The historic via ferrata does not present particular technical difficulties during the ascent but extends in a wild environment of high mountains. The return can take place for the Marmolada glacier. Itinerary to be planned carefully both for the length and the height difference.

The starting point of the itinerary is Passo Fedaia. You park in the square near the ski lifts by cable car to Pian dei Fiacconi. You reach the Fedaia Pass both from Canazei (Trento) that Malga Ciapela (Belluno). Directions for Google Maps available here.

From Pian dei Fiacconi we proceed in a westerly direction that following the CAI 606 path, initially uphill on a glacial valley, leads us to bypass a rocky edge which is the northern prominence of Punta Penia. In this section we lose altitude until we reach (2470 m) and then go up steeply along the detrital valley that will lead us to Forcella Marmolada. We will have to pay attention uphill the moment we enter the Vernel glacier. Although we would tend to stand on the left side we will have to stay on the central part. At the beginning of the season - with fresh snow present - the ascent will not be problematic. In late season you will walk on live ice and for this reason crampons are recommended to avoid risks due to the slope of the glacier. There are some crevasses on the right side of the slope and attention is required. We will climb reaching the right edge of the glacier until we reach the first ropes near a red sign (1h 45 'from the mountain station of the cable car).

Once we reach the first ropes we go up the first part of the ferrata that will lead us to Forcella Marmolada. This section does not present difficulties as it is composed of short inclined slabs and some easy rocky leaps. reached Marmolata saddle (2910 m - 2h total) we meet the path that goes up from Val de Contrin (possible longer alternative approach) and the remains of some war barracks dug into the rock. Let's face one now ascent on a series of metal brackets that help us go up a slab without holds. We leave this first section and we climb on tracks along a path that leads us to an inclined ramp aided that we climb without worries. We reach a steeper stretch of the ramp that is suitably aided with metal brackets. We continue the climb on slab until we reach a sideways where some pegs and brackets lead us into a chimney in turn aided with pegs, brackets and a ladder. We leave the chimney and climb up rocks first and one vertical wall then that leads us to a new one long inclined ramp where the cable helps us to maintain balance during the climb.

After this difficult stretch we reach a new slab with metal brackets on a wall that is however quite supported. Once the brackets are finished, the wall supported by the cable continues, which acts as a balance in the ascent. Let's continue on a stretch which seems to repeat itself, alternating brackets with slabs until you reach a panoramic terrace from which you can see the ascent height difference during the trip. We now enter the last section of the ferrata characterized by a ridge route that extends over theimpressive bastion of the south face of the Marmolada.

Now let's continue on wire of the west ridge identifying the destination of our itinerary. This part of the itinerary no difficulty and between modest ups and downs brings us, after some easy rocks, at the end of the equipment. We are atlast stretch of the climb, without cable, which will lead us to the Rifugio Capanna di Punta Penia before and after a little to the cross of peak of Punta Penia (3343 m - 2h 15 'from the start - 4h total).

Take a break to enjoy the absolute panorama from the summit and a visit to the Spartan Hut of Punta Penia we begin the descent that will take us to Pian dei Fiacconi. Having made the necessary premise that it is possible to descend along the via ferrata backwards, the most logical descent for a circular route is to reach the underlying Marmolada Glacier after having traveled some sections aided downhill. The glacier is furrowed by some clefts and care must be taken, particularly in the case of fog. Yes descends along the glacier following the obvious trail until you reach the Pian dei Fiacconi Hut (2626 m) and the cable car that will take you to the car park (1h 45 'from the Punta Penia Hut - 5h 45' total).

The Punta Penia Ferrata does not present particular technical difficulties and is of absolute level in the landscape. This ferrata climbs to the beginning of the last century and is an itinerary that allows you to reach the highest point of the Marmolada group. In view of the modest technical difficulties, the via ferrata takes place in a high mountain environment with all the difficulties of the case and this requires to plan the trip in particular keeping the weather in mind which can change suddenly.

A return deserves a separate discussion. The Marmolada glacier is battered by a slow but inexorable withdrawal and this leaves showy crevasses on the way. It is necessary to have experience and be safe during the descent to avoid potentially dangerous situations.

The Ferrata along the West Crest of the Marmolada extends on the opposite side from the other historical ferrata of the Marmolada, or the Eternal Ferrata at the Piz Serauta. Compared to the Punta Penia via ferrata, the Ferrata al Piz Serauta is longer, exposed and difficult. Going down to the Fedaia Pass it is possible to go up on the opposite side of the pass in the direction of Porta Vescovo and walk along the bella Ferrata delle Trincee. Instead continuing further downstream to Canazei (Val di Fassa) it is possible to enter Val de Contrin to cover the Via Ferrata Financiers at Colac or going up the valley you could go along the Via Ferrata Ombretta or the Ferrata to the Col Ombert.

Traccia GPS per Ferrata Punta Penia alla Marmolada. Itinerary: as per description above. 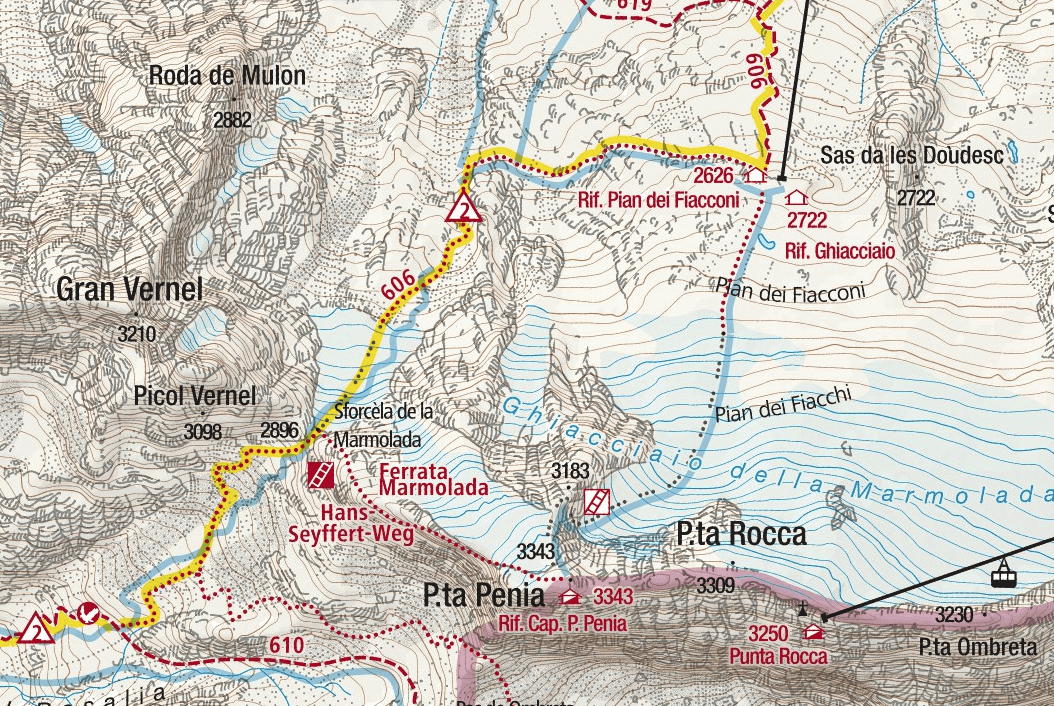 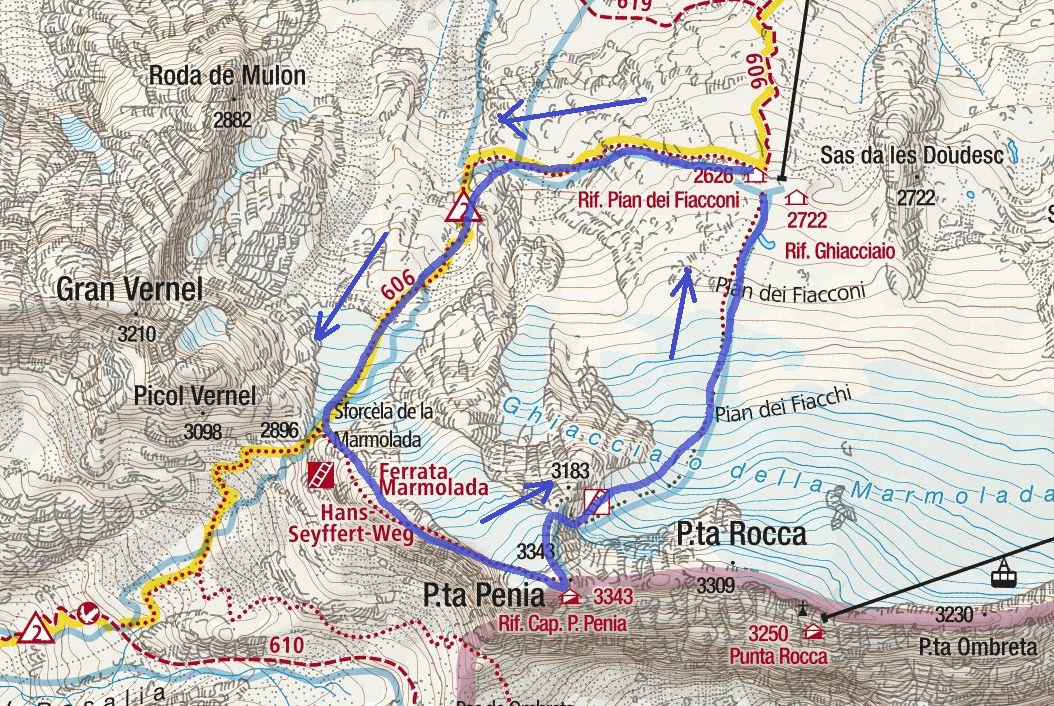