Via Ferrata Ra Gusela at Nuvolau

The easy Ferrata Ra Gusela extends on the south face of the Nuvolau Group in the Ampezzo Dolomites. The itinerary is suitable for beginners and does not present significant technical difficulties. Very beautiful itinerary with landscape approach and return of medium length. It is possible to climb part of the route by cable car from the Falzarego or del Giau side.

The route of the Ferrata Ra Gusela is practicable both starting from the slope of Passo Giau and from the slope of Passo Falzarego. The most logical itinerary is to start from Passo Giau, which concludes the hike without a ski lift with a beautiful circular route. In this case you have to go up to Passo Giau (2236 m) going up from Cortina d'Ampezzo or from Selva di Cadore. Directions for Google Maps available here.

If you decide to start from the slope of the Falzarego Pass you should use the "5 Torri" ski lifts which can be reached a couple of kilometers downstream of the pass on the Cortina slope. Directions for Google Maps available here.

From the Passo Giau car park (2236 m) we head north towards the Nuvolau on the wide path until we reach a saddle in less than ten minutes. The report presented imagines the Ferrata Ra Gusela traveled uphill so at the junction we will keep the right (path 443) and we will return from the left path (path 452). In case you want to use the ferrata on the way back, go up to the left and go down to the right.

Keeping right at the saddle in the road, continue north-east along a wide path until you reach a saddle in the road. We will keep the left taking the path 438 with clear indications for the Ferrata and the Nuvolau Hut.

The path 438 proceeds steeply until you meet the first wire rope near an easy ledge (1h from Passo Giau).

From the first wire rope we follow the aided ledge to the right. The ledge is wide and presents no difficulty. We always proceed to the right on the ledge with the cable that acts as a handrail bypassing an edge beyond which we head towards the vertical wall. After the edge we are under the yellowish eastern wall of Ra Gusela and we will notice a small couloir that cuts the mountain diagonally. We head with the ledge in the direction of the gully. We climb some easy rocks and we are at the entrance to the gully.

The gully it has rather brittle soil and we will initially keep to the left side following the wire rope. We reach a more vertical leap that we go back to with one short metal ladder. We leave the gully and after a few easy vertical jumps we go along a new ledge towards a small saddle. On the opposite side of the saddle we are on a slabau with straight to us 100 meters higher up the Nuvolau Hut and to our left the Ra Gusela.

We follow the path along the slabau (be careful not to lose the signs) reaching on the opposite side of the slabau reaching the ridge on the opposite side. We will have to go back up about 60 meters in altitude to reach the hut. This stretch of the route climbs in the direction of the ridge initially on a ledge then we go around an edge and find ourselves in greater exposure on the final ridge. Let's go up one first metal ladder and let's proceed on a couple of passages on rocks fairly exposed but not difficult with another metal ladder. In short following the trail we are at Nuvolau Hut (2575 m - 1h from the start - 2h from Passo Giau).

The descent takes place following the tourist path that descends gently towards the north towards Forcella Nuvolau first and then the Averau Hut. Once at the shelter (from which it is possible to take the Ferrata to the Averau) you can return to Passo Giau (1h 30 'from the end of the ferrata - 3h 30' total) with path 464/452 on the left or if you have to go back to the Rifugio Scoiattoli you can take path 439 on the right (1h from the end of the via ferrata).

The Ferrata Ra Gusela is an easy itinerary without difficult passages and exposed only in a few stretches. Ideal itinerary also for half-day trips.

The Ferrata Ra Gusela extends in the Nuvolau Group where it is possible to chain this route with the neighbor Ferrata to the Averau. From Passo Giau down towards Selva di Cadore we can proceed towards Laste di Sopra from which it is possible to reach the start of the easy Ferrata at the Sass de Rocia. From Selva di Cadore it is possible to descend southwards towards the Civetta where there are 3 challenging fixed-rope routes: the Ferrata degli Alleghesi, the Ferrata Tissi and the Ferrata Fiamme Gialle with Pelsa or up to Via Ferrata Costantini to Moiazza. If from Passo Giau we continue towards Cortina we reach the starting point of the Via Ferrata Sci Club 18 to Monte Faloria.

Traccia GPS per Ferrata Ra Gusela al Nuvolau. Itinerary: as per description above. 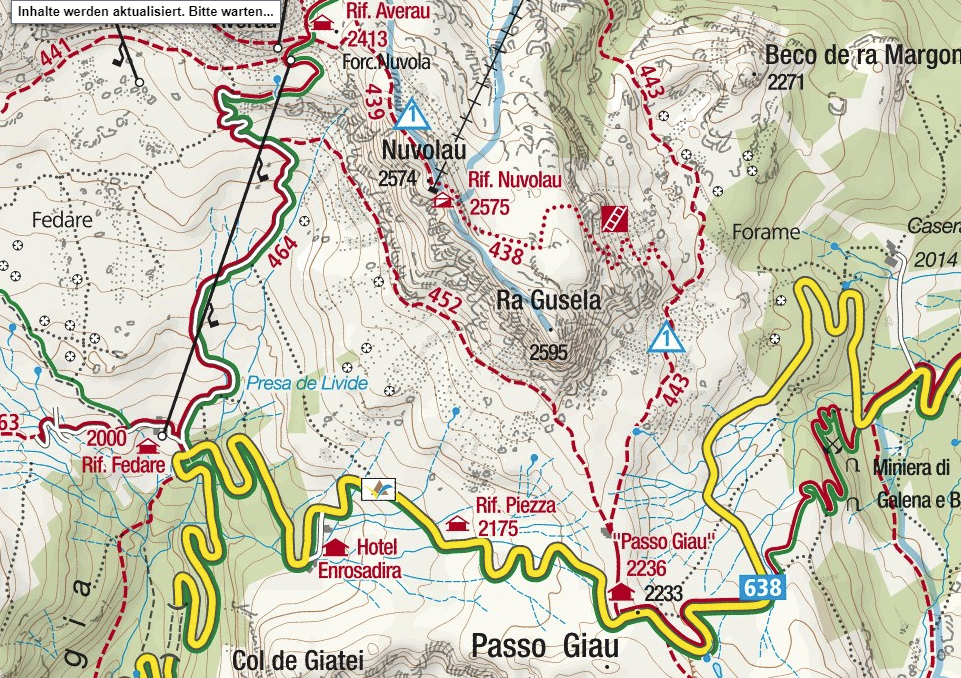 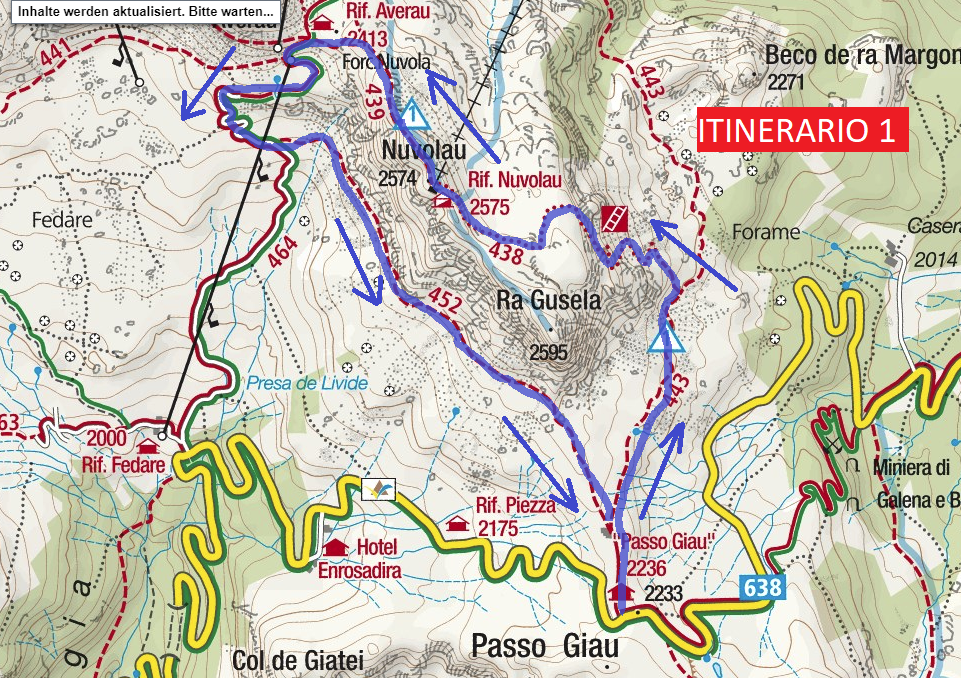 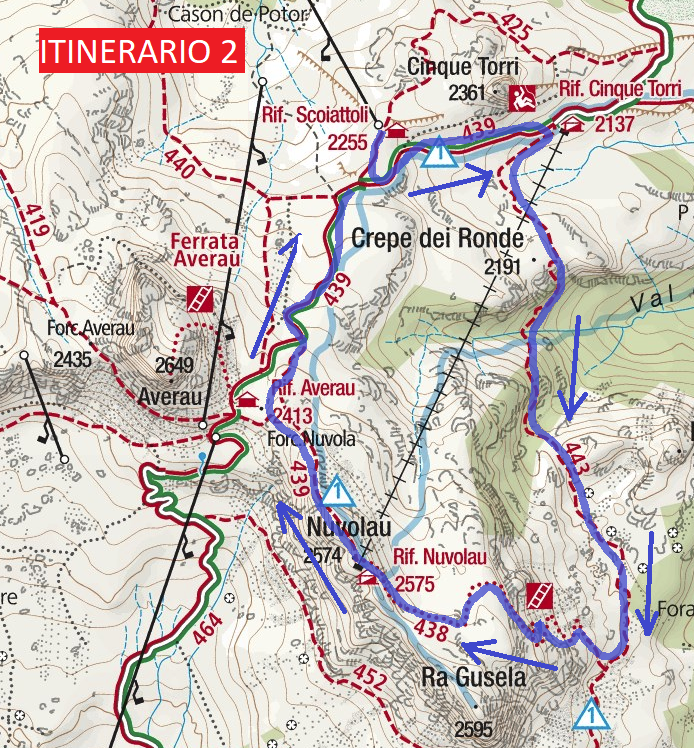 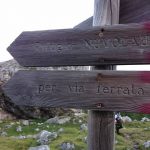 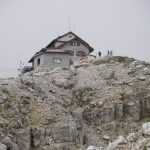 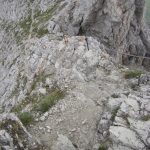 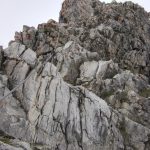 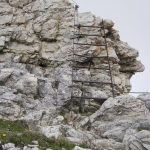 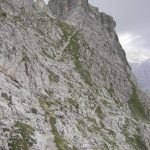 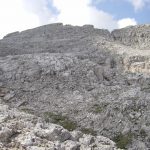 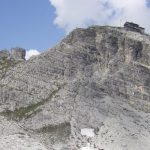 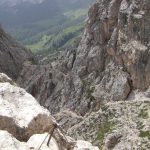 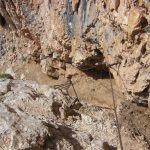 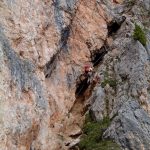 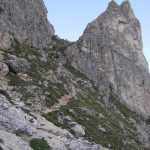 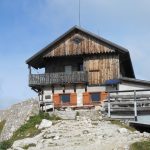