This short via ferrata does not stand out for the landscape interest or for the climbing of the course but for the athletic nature of the passages and for the possibility of being traveled all year round. The approach is short and, including the return, it is possible to cover the entire trip in just over two hours.

The starting point of the itinerary is along the Panoramica del Pratomagno road. Exit at Valdarno you reach Terranuova Bracciolini (SP 11), then Loro Ciuffenna (SP 5) and from here towards the fraction of Anciolina. Cross the village and go up for a couple of minutes until you reach a saddle: on the left for the Pratomagno, we keep the right downhill. After about 400 meters we will notice a clearing (often stacked wood) where it is possible to park. A little further on the left you can park in another clearing a few meters above the roadside. Directions for Google Maps available here.

Park the car and go up the road just downhill for about 200 meters. We look for a wide and steep path marked by a sign of the CAI of Arezzo. After a few hundred meters you have to follow two trail signs on a stone (red arrow) and a tree not immediately visible that go back to the right. Go past the bed of a generally dry stream and you can continue following the signs white red. Climb up some easy rocks and reach the start of the ferrata (25 'from the parking lot).

The via ferrata is short and goes up a series of rocky jumps following a not always logical climb, making in some parts, in some places, an athletic climb that probably would not be following a different climb.

The first section climbs a wall of a about ten meters in which it is not easy to continue without pulling on the cable due to the lack of holds. From this stretch we face a wall that at first glance seems particularly smooth while during the course some recesses can be used to look for progression. At this point the first section ends the first section, we take off the carabiners and through a path we reach the second aided stretch..

The second section faces swiftly a aided ledge and then we reach a vertical and slightly overhanging wall in which we can use the brackets of the via ferrata and some slender handholds for the feet. As often happens in the overhanging walls, the change of carabiner must be done quickly to avoid straining the arms too much. At the end of this section we conclude the second section and walk along a path to reach the third most difficult section.

The last section is composed of a vertical wall without grips in which progress is made in grip and traction on the cable in search of the few providential grips for hands and feet. Go up again and go around an exposed edge. The chances of climbing are reduced and the progression on the last dihedral occurs again in adherence to conclude the demanding third section.

The path continues and leads us to the start of the forth and final section made of a dihedral that goes uphill to the end of the section and the resumption of the path. This section requires a first initial leap to get off the ground and then become decidedly climbing and enjoyable.

We reach an aided boulder that can also be bypassed. Then we reach the last part of the route where we first climb a dihedral and then a sharp but well-set corner. Take the last rock jump till the ends the ferrata (1h from the start - 1h 30 'from the parking lot).

From the end of the via ferrata we follow the track for a few meters to the ferrata slab. The fastest return is for the left track that goes down a path alternating sections in the forest and uncovered stretches until you reach the paved road. We walk downhill to the left until we reach the junction with the car previously traveled. We ignore the deviation to the right and continue straight downhill and soon reach the car (30' from the end of the Ferrata Romana Nesi - 2h from the beginning).

This short ferrata extends in an environment that does not present particular difficulties. Some passages of the way, go to look for the difficulties present in the various leaps and this from some points of view is at the expense of climbing. However, we feel we should make a consideration. There climb to the Pratomagno it can also be done directly by tourist trail and therefore, those who have aided the via ferrata, wanted to offer the possibility to test themselves. Each section can be circumvented by path and therefore it is possible to avoid any parts of the route that are not desired. In this perspective it can be useful in the winter months as training in view of summer trips on more arduous mountains. The approach and return path are well marked.

There are no other aided sections nearby. The itinerary can be extended reaching the Croce del Pratomagno (1591 m) with an itinerary of about 5h 30 '. If you wanted to look for a via ferrata reachable on the same day, you should aim for Ferrata Rocca Badolo (exit A1 Sasso Marconi - 2h journey) or the Ferrata di Sant'Antone (Monti Pisani - 2h 15 'journey).

Traccia GPS per Ferrata Romana Nesi. Itinerary: as per description above. 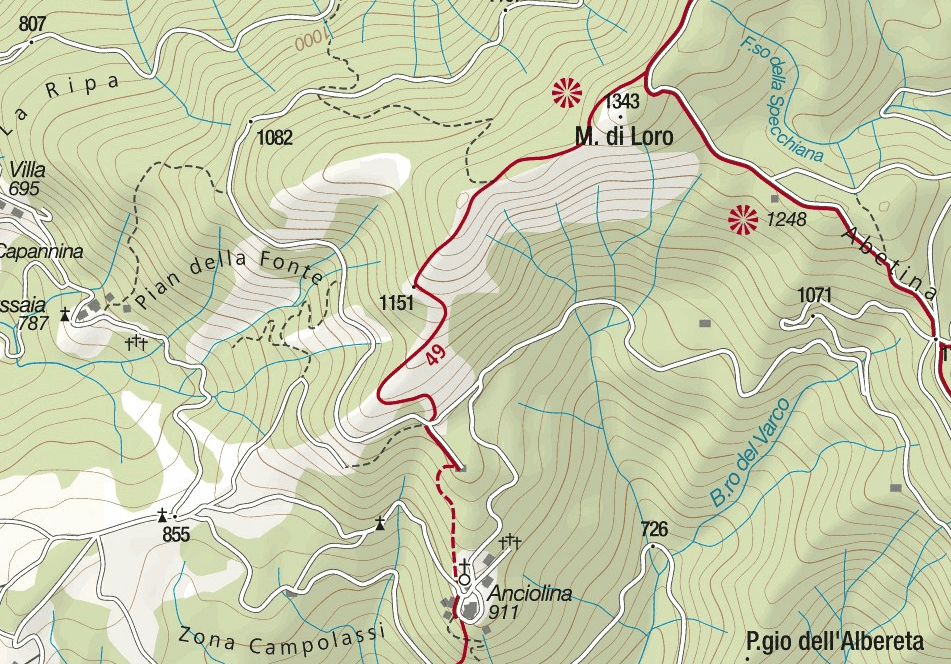 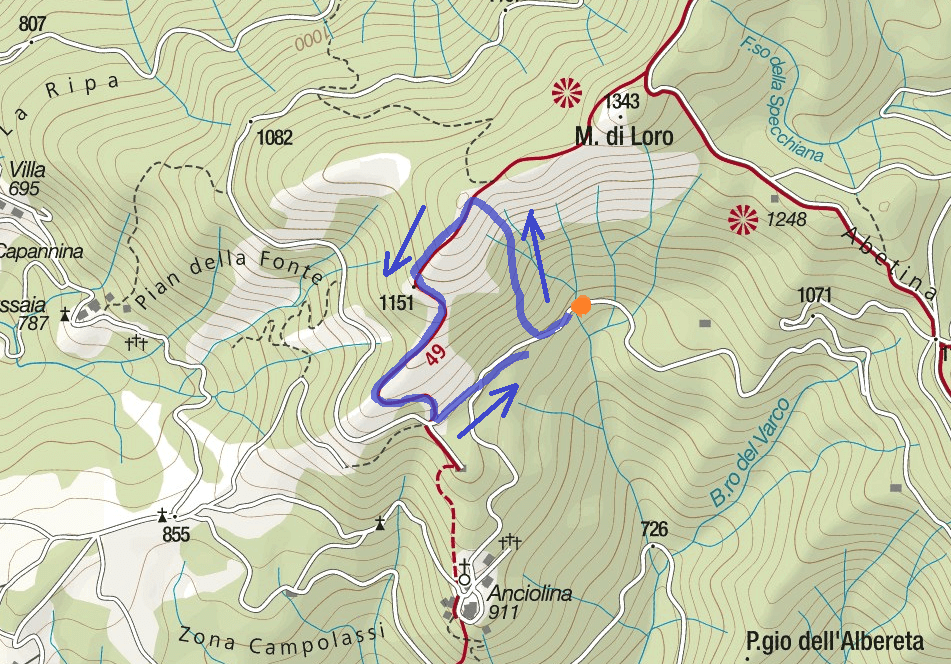 Images Ferrata Romana Nesi. The images included in the report were sent to us by the users of the site. If you are interested in sending us photos, use the form on the left or send them to our Facebook page. 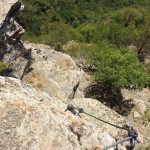 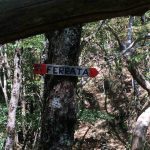 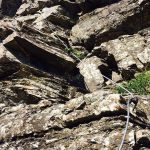 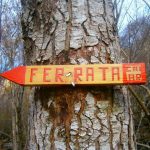 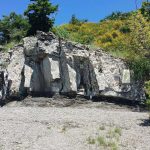 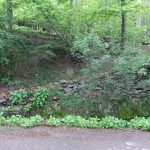 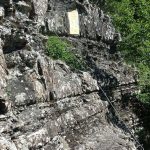 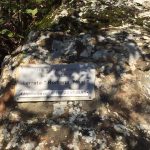 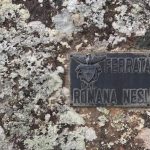 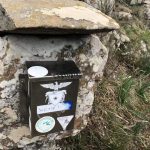 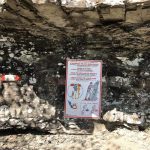 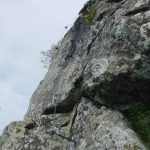 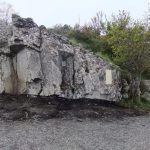 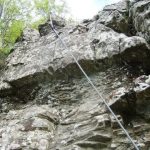 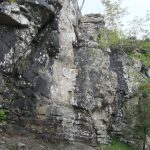 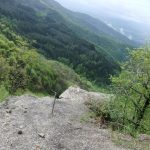 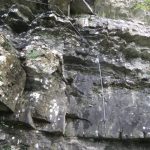 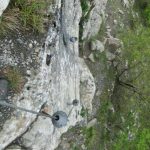 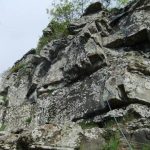 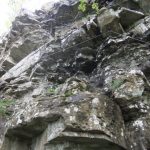 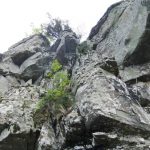 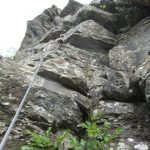 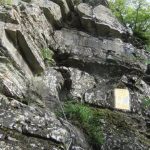 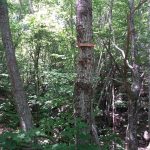