Via Ferrata Salvatori at the Pania Forata

This easy ferrata is characterized by being aerial and faithfully following the ridge that rises from the Foce di Petrosciana to the Monte Forato. Given the low altitude it is passable for most of the year.

The starting point for the Ferrata Salvatori is the Alto Mattana hotel in Garfagnana. To reach the bar (it does not offer the possibility to stay overnight), you must reach the Garfagnana from Lucca following the SS 12, then take direction Diecimo first, then Pescaglia. Cross the village of Pascoso and following the signs for "Albergo Alto Mattana" turn left onto a paved road.

The hike starts at the hut started shortly after the CAI 109, which turns right. We will take this detour remaining on the north wall of Monte Nona. We reach the Foce delle Porchette and, ignoring the deviations, we continue straight on the CAI 109 up to the Foce di Petrosciana (1h 20 'from the parking lot).

At the Foce di Petrosciana there is a marble slab showing the name of the ferrata and indicates the steep access to the via ferrata ignoring the path that runs along the ridge below (we will do it on the way back). Climb some easy rocks until you reach the first cable that runs along a traverse and leads us to an escape route. Continuing on the path of the ferrata, we reach a rocky pulpit to climb up an exposed dihedral of 15 meters that deposits us on a small airy from which we must start uphill on a steep wall with few holds (key passage). We reach a ladder of 5 meters and from here on the technical difficulties end. The ferrata continues on the ridge edge but never difficult until the end of the equipment. Follow the thin trail and reach the top of Monte Forato or as its best known Pania Forata (50 'from the start - 2h 15' from the parking lot).

Descend from the Garfagnano side for 40 meters until you cross the marked CAI 110 which we will retrace back to the start of the via ferrata (20 'from the end of the ferrata - 2h 40' from the parking lot). From here we follow the path made in the outward journey back to the car (3h 45 'total).

The Salvatori Ferrata is overall easy with only a few more technical passages at the beginning of the route. It is worth mentioning the impressive hole that characterizes the Monte Forato or Pania Fortata which alone deserves the entire trip.

It is possible to rapell down from the arch of Pania Forata (literally holed mountain).

Alternative itinerary departing from Fornovolasco, where the famous Grotta del Vento is located.

Take the easy CAI path 6 which retraces an old mule track in a mixed chestnut and beech wood that flows through the Caraglione stream. After 15 minutes you will find on the right "La tana che urla" a natural cave where a clear stream of water flows (see detail here). here).

Continue to the junction with path 12, which continues to the right. We keep the left flat on path 6 which will continue along the stream, first visible and then underground. Along the trek you can admire old buildings and a mill. The path is well marked.
Path 6 will take us to a pass called Foce di Petrosciana (961 m - 1h 30 'from the parking lot) where there is a 5-way crossroads:

From the summit cross we start again in the direction of the base of the arch to take the CAI path 12 up to the valley, where we will rejoin the previous path 6.
Both the outward and return paths are very pleasant despite the fact that they climb to the top, they present a zigzag approach, facilitating fatigue and physical commitment. Complete itinerary including breaks about 6h 30 '.

To this link the GPX track. 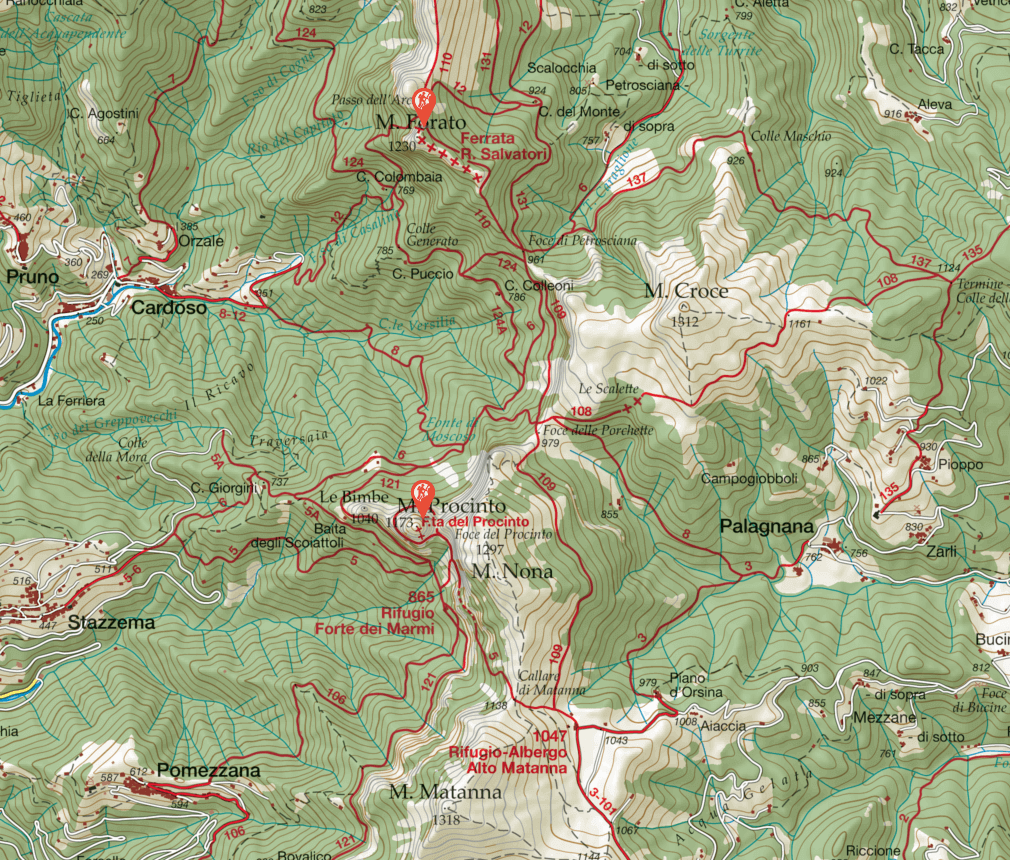 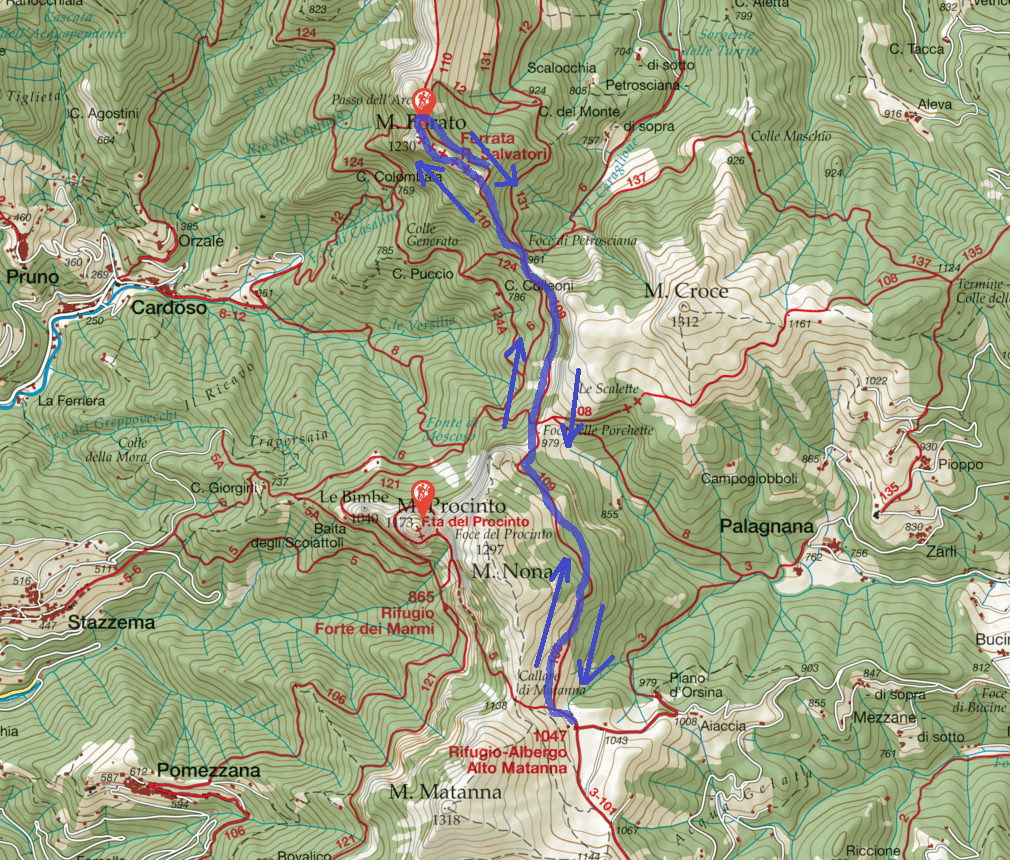 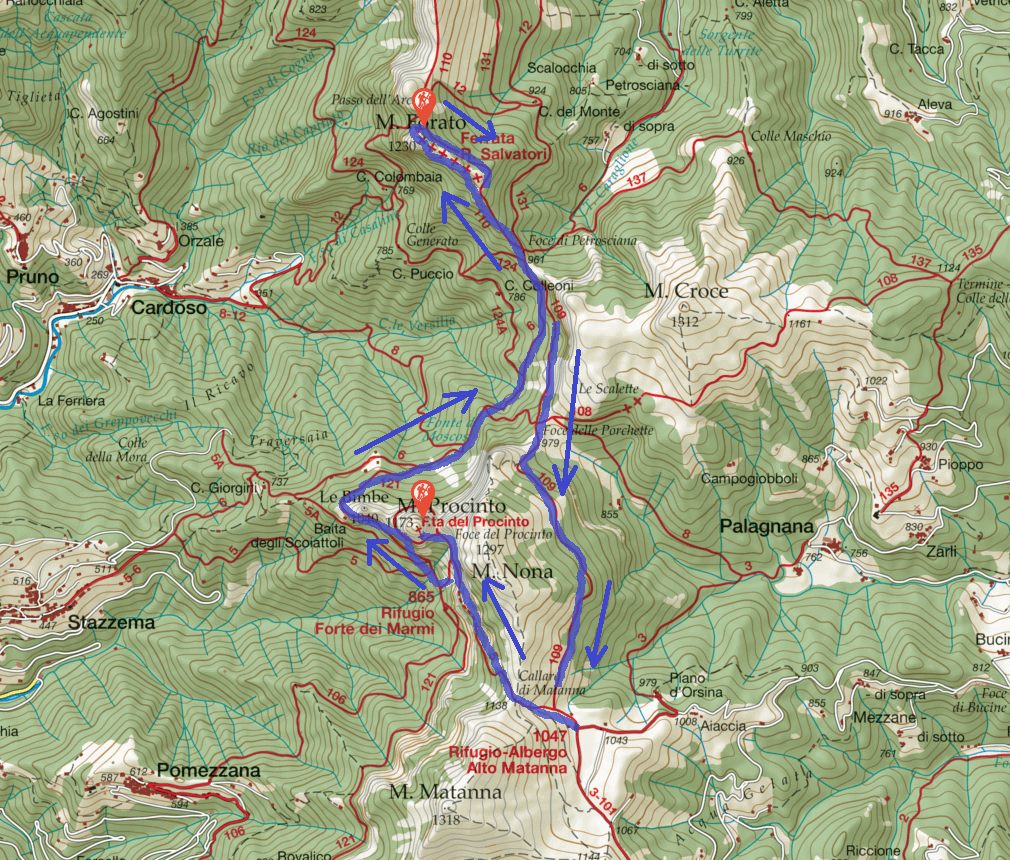