Via Ferrata Sartor at Peralba

Review of the Ferrata Sartor at Monte Peralba. The ascent is of medium difficulty and rather short within a pleasant hike to the highest mountain in the Sappada area. Return for the demanding normal route on the north side.

To travel the Ferrata Sartor al Peralba, we will have to reach the Rifugio Calvi located between Chiadenis and Peralba. The starting point of the itinerary is along the Provincial Road 22 which connects Cima Sappada with the Sorgenti del Piave. Cima Sappada is about 1 Km eastwards from the town of Sappada located along the road that connects Veneto (Santo Stefano di Cadore) e Friuli (Comeglians). From the center of Cima Sappada a road starts on the left with clear indications for the Sorgenti del Piave. We continue on the paved road, sometimes narrow, which climbs for 8 km and ends at the Sorgenti del Piave Hut. Before reaching the hut we will notice a large parking area at the roadside where it is possible to leave the car to undertake the trip. Directions for Google Maps available here.

Leave the car in the parking lot (ca 1800 m) follow the directions to reach the Calvi Hut. The trail starts on a dirt road that goes up and down between hairpin bends until you soon come to a saddle. On the right rises an aided path indicated "Sentiero delle Marmotte". Both paths they reach the hut in about 45 'from the parking lot. Once at the Calvi Hut (2167 m) yes follow the directions to the Peralba and the Sesis Pass and after about 15 'of ascent we meet a crossroads (2272 m) where we keep the left towards the rocky bastion of Peralba. We continue until we reach the marble slab and the start of metal equipment (2360 m - 1h 30 'from the parking lot).

To the right of the white marble slab a long series of metal switches rises on smooth slab. We quickly gain altitude and exposure by passing a couple of slightly overhanging points. There slab continues after a narrow balcony passing from wide horizontal pegs to pegs and handles gradually decreasing the verticality and now climbing on a more supported wall. You climb on good rock where large holds are not always present but in which some grooves in the rock help the progression. The via ferrata continues in this section on an almost straight line since the slab is fairly supported and not difficult.

After about seventy meters of rather leaning slope the cable bends to the left. We turn for a moment to look at the Calvi Hut and the quota earned to then restart. We proceed by about ten meters on a narrow ledge to the left and we find ourselves under a gully where we will ascend. Attention along this stretch to the potential falling of stones. The cable now rises diagonally to the right. We climb on a well-attached wall until the end of the metal equipment (40 'from the start).

The ferrata is finished but to reach the summit of Peralba one must follow the modest trail with faded red signs that rise to the summit. We climb following the track identifying as we proceed the cross and the summit Madonna. We reach the ridge where on the right we climb to the summit while on the left we descend the Via Ovest, a possible longer alternative descent. We reach the peak of Peralba characterized by a cross, a bell on a Madonna and with a magnificent view (2694 m - 1h 15 'from the start - 2h 45' from the parking lot).

The descent will take place along the steep path that descends on the north side. We start the descent and we set off with some exposure to a saddle where we meet two metal slabs: one for the Pope's visit and the other for the fallen of the Great War. We meet a saddle that leads to the remains of the war, we keep to the right following a red stamp to the right of a carving in the rock. Start the steep descent taking us to a rather steep aided gully and on a friable base on which it is absolutely recommended to keep the harness. The descent is steep and, despite being partially aided, it is perhaps the most difficult part of the route also due to the often damp rock. We continue the descent on a very unstable trail and track in which we will have to follow the logical descent line to reach the valley after having passed a gully and descended to the edge of a scree. We reach a pole where following the indications we hold the right and overcome to the Pass Sesis from which we descend to the underlying Rifugio Calvi (1h 15 'from the summit). From the hut we go down to the parking for the approach path (30 'from the hut - 1h 45' from the summit - 4h 30 'total).

The Ferrata Sartor is a short via ferrata with no significant technical difficulties that climbs up the south side of Peralba. The first section of the route is vertical with many brackets present. The second part of the route is more supported and climbable. The last stretch of the climb is a trail at high altitude to reach the summit. Very beautiful trip from the landscape point of view and not excessively difficult.

However, a return deserves a mention. The descent takes place via the normal ascent route to Peralba. Already from the first meters of descent we will notice the strong exposure and the difficulties present in the path. This stretch is also exposed to the north and therefore easily covered with snow even at the beginning of the season.

From the Sesis pass it is possible to head east to the start (30 ') of the Via Ferrata del Chiadenis (3h ascent and descent) that leads us to the Calvi Hut and therefore is an excellent candidate for a long trip combining two aided itineraries. 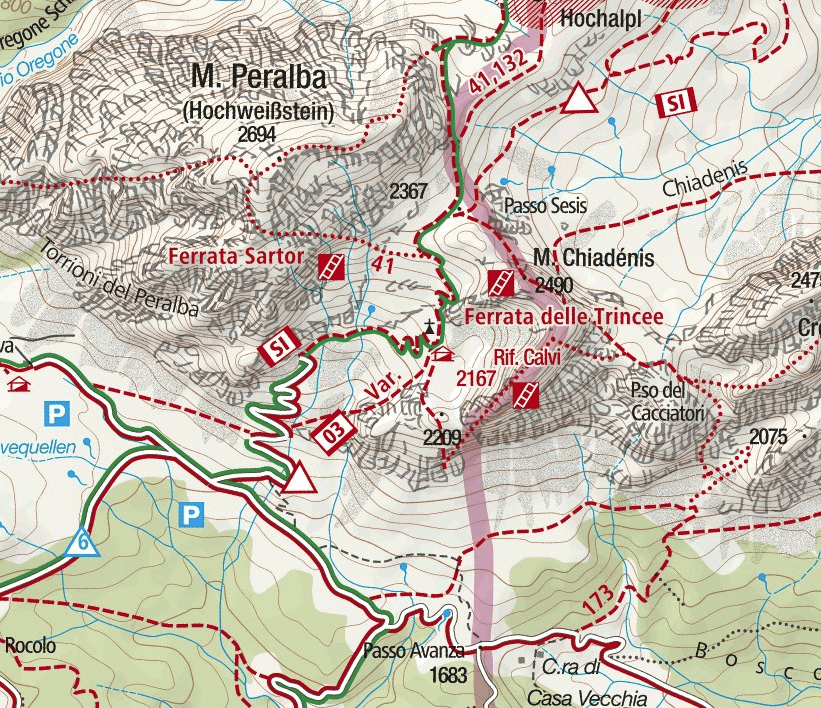 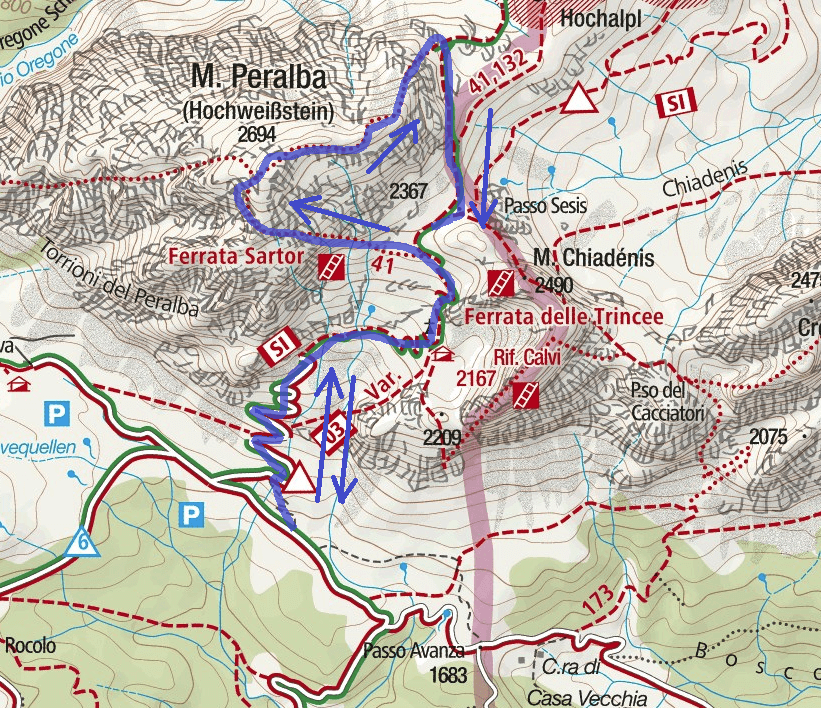