Review of the Ferrata Sass Brusai at Monte Boccaor in the Grappa Massif. The via ferrata can be climbed with a couple of challenging passages placed at the beginning and end of the itinerary. At the top you can continue to the Grappa Memorial and eventually go down the nearby Guzzella via ferrata. Low-altitude route that can be traveled over long stretches of the year. Watch out for the warm months due to the southern exposure.

The starting point of the itinerary is Val San Liberale in the restaurant of the same name, which can be reached from Crespano del Grappa in the province of Treviso. Driving along the Provincial Road 26 that connects Romano d'Ezzelino with the Piave valley, when you reach Crespano del Grappa follow the signs to the north for Val San Liberale. Follow the paved road to the large parking lot near the restaurant. Directions for Google Maps available here.

From the parking area (600 m) we climb following one paved road up to a first junction where there are signs to the left for the Ferrata Guzzella while to the right you go up in the direction of the Ferrata Sass Brusai. We continue straight on the asphalt until this becomes a dirt road that continues uphill. We reach a signposted junction (710 m - 30 'from the parking lot) where we keep the right going up the CAI 153 in the direction of the Ferrata Sass Brusai. We continue now in the woods for steep path following the red signs up to a signposted junction where we follow on the left the directions for the start of the via ferrata. The path is now very steep and leads us to reach the start of the Sass Brusai Ferrata (1160 m - 1h 15 'from the parking lot).

From the small balcony where it is possible to wear the harness, climb some small rocks to the left of the slab and the first section of the route begins. We are under one wall of fifteen meters which in the upper meters takes the form of a chimney. The climb is very pleasant, the jagged rock is full of large supports for hands and feet so as to be able to climb up this first exposed trait rather smoothly. We leave the chimney, climb a couple of jumps on a mixed rock grass surface (be careful if it is wet), a short ledge on the left and we begin a connecting stretch on the path.

Then we reach the second aided stretch. We climb along one ridge made of large rocky blocks and us standing initially on the left side we go up again. We continue along this ridge following the red signs and the steel rope. The rocky rib is initially surrounded by trees resulting in a very low sense of exposure. The equipment ends momentarily, we continue on a grassy path towards the third stretch of the road, separated with a couple of easy aided jumps.

The third aided section extends along a rocky rib. The lower part is well set and climbing. Greater technical difficulties are present in the upper part where the rock forms a crack and a couple of projections force it to proceed in a split along the opposite side with respect to the rope. We go on to reach a well appetina wall to go up again and then a slab. From this point the view on the opens Monte Grappa and on the Val San Liberale behind us. We continue in a connecting stretch reaching an interesting passage. We climb a few meters and enter a chimney. The chimney is rich in hand and footholds but it is necessary to proceed in split so to maintain the balance and proceed in the higher section.

We continue on the path meeting some rocky outcrops of modest difficulty from go up and down, aided grassy ledges and easy leaps. This part of the route is pleasant and of limited difficulty and leads us to one clevis, "Sella del Candidato"(1345 m - 45 'from the start), which we cross in the middle of the vegetation.

Once past the Candidate's Saddle we meet two challenging and vertical passages. We climb a rather smooth first wall where we can use the handholds present but the difficulties present could force a certain traction of the cable. Let's finish this challenging first step. We cover a connecting stretch and move towards a new, rather exposed, smooth partition wall. The passage extends near the ridge. The passage is short and, looking for the holds, you go up without too much effort. We move on the ridge that preserves its exposure but the passages become less demanding.

We follow the connecting path and reach a rocky spur that we ascend on its right side. We meet a metal bracket - which is unusual in this way - that helps where holds are missing. We go up and bend to the right around an edge. Straight to us a long rocky rib that we will ascend. Always with a protective wire rope we face a series of rocky steps and then a slab of 6 meters. We continue on a stretch of aided path (as always, pay attention to the bottom) which leads us first to a leap then to a gully. We leave the gully and continue to encounter new easy rocky leaps.

We are now in a long stretch of connection on the path where we ignore the deviation for the CAI path 152 (1455 m - 1h 15 'from the start) for Pian della Bala and Cima Grappa. We follow the track and the red signs also climbing some easy rocks that lead us to the suspended bridge. We climb the pulpit where the bridge is located rather smooth slab and it we go around to the right. We walk the bridge up solid wooden boards and we take ourselves to the opposite side where we soon notice an escape route to the left for reach the road passing under the bridge. We continue to the right along the road.

We leave the bridge and start a climb some rocks until reaching a new stretch exposed and more demanding than the average of the passages of the route. We are under a rocky pulpit to go up on the wall where the holds are not excessive. We continue along the way, leaving the bridge behind us and reaching a split of the rock that we cross in split continuing along the ridge. This stretch is very leaning and we continue with the cable almost like a handrail. We continue on the path until the last passage of the route. Let's go up one wall of about ten meters on rock that has holds to proceed climbing. You can avoid this last wall by following the red arrow at the route book that shows us how to get around the obstacle. At the end of the slab the equipment ends as indicated also by one slab with the whole Val San Liberale behind it. We follow the track that, running parallel to an old trench, takes us to the summit of Boccalor (1532 m - 1h 45 'from the start - 3h from the parking lot).

From the peak follow the signs to the left to Pian della Bala (1380 m) where again to the left we follow the path 151 which descends towards the junction meeting at the outward and then at the parking (1h 30 'from the end of the ferrata - 4h 30' total) ).

The Ferrata is currently in excellent condition with a tight and solid rope along the entire route. Ferrata that presents the most challenging passages in the first and last wall of the route and is very climbing along many stretches. The low altitude and southern exposure make it prohibitive in the hottest months of the year. Strenuous approach and not short return to take into consideration. Beware of unprotected sections where there is grass that tends to be slippery.

Experienced hikers could combine the Sass Brusai Ferrata with the nearby Guzzella, It is preferable to take the Ferrata Guzzella downhill to avoid the many unprotected stretches of Sass Brusai rather slippery. Attention in the Guzzella to the challenging passages of the last stretch for those who climb, first for those who descend. Near Monte Grappa we find two other very different Via Ferratas: athletics and short Ferrata Santa Felicità and the longest and technically easy Aided path of the Heroes. Moving instead in the Val d'Astico you can go along the recent one Via Ferrata Anelli delle Anguane.

Traccia GPS per Ferrata Sass Brusai. Itinerary: as per description above. 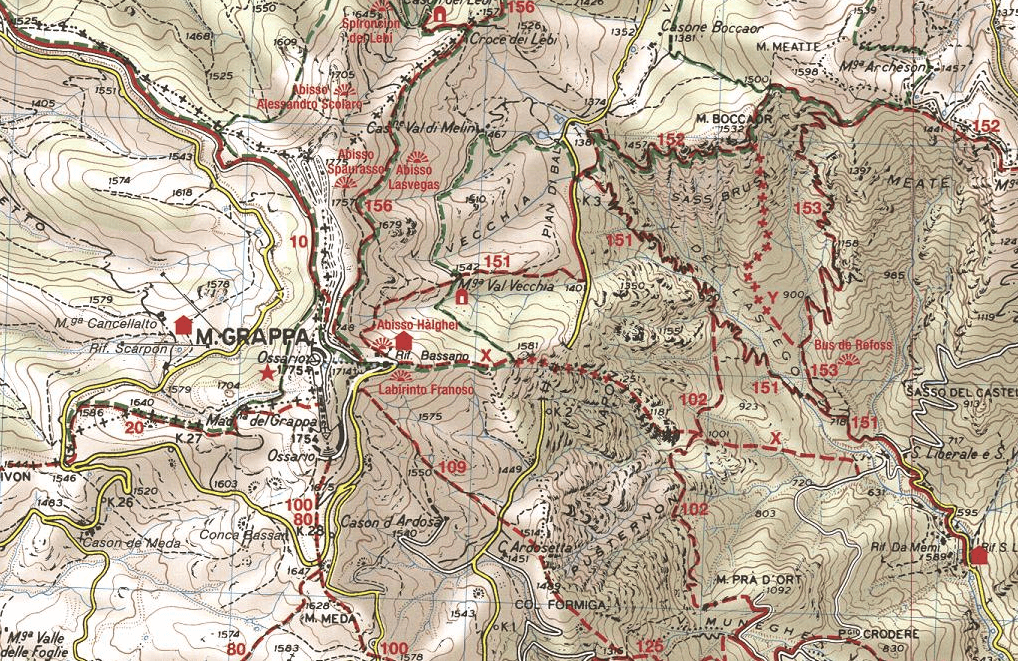 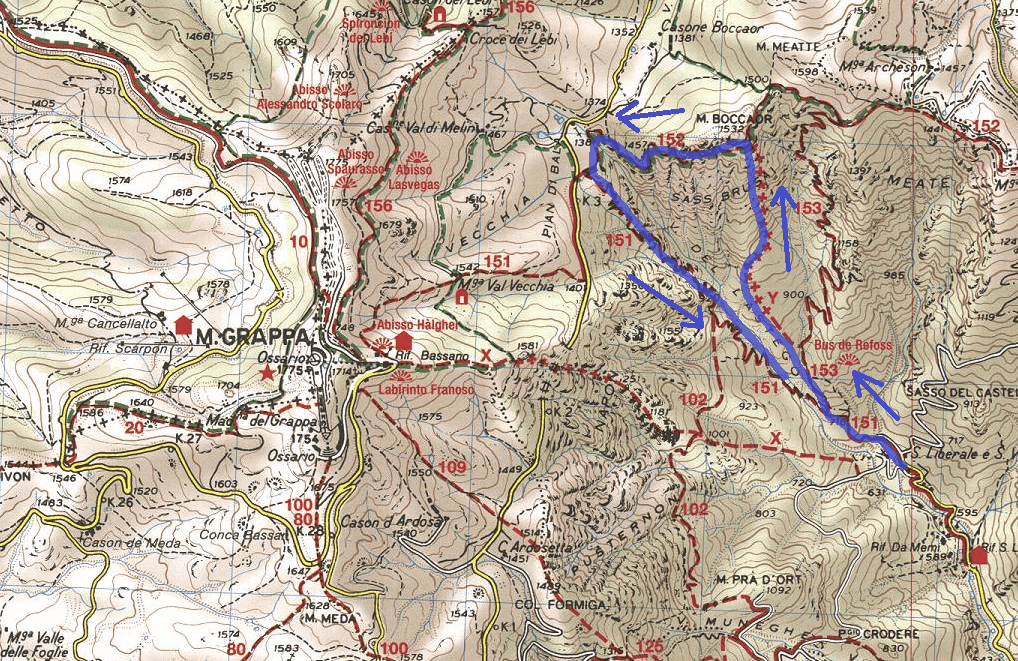 Images Sass Ferrata Brusai. The images included in the report were sent to us by the users of the site. If you are interested in sending us photos, use the form on the left or send them to our Facebook page.