The Ferrata Scala del Menighel (literally "The Menighel Ladder") is a short ferrata that is generally used to complete the tour at the base of the Tofana di Rozes using the Rifugio Giussani as a point of support for the itinerary. The ferrata is singular and, as indicated in the name, it is a stairway composed of a long series of brackets that climb a 100m bastion that along the north side of the Tofana di Rozes cuts through the Masarè valley. The ferrata does not present significant technical difficulties but is exposed and the structure of the brackets dating back to the early 1900s require concentration.

The starting point of the itinerary is the Dibona Hut on the Ampezzo slope south of the Tofana di Rozes. The hut can be reached by a paved road that branches off from the road that connects Cortina d'Ampezzo to Passo Falzarego. Going up from Cortina towards Passo Falzarego we follow the road to the right that leads to the Dibona Hut with directions. Avoid the saddle on the right along the road that leads to the Duca d'Aosta Hut. Directions for Google Maps available here.

Leave the car in the Dibona Hut and take path 403 which, on a large carriage road, starts with a slight slope towards the impressive southern wall of the Tofana di Rozes. We soon reach a junction where the path 403 proceeds to the right towards the Rifugio Giussani and we continue straight towards the south wall. We reach and ignore the crossroads where to the right you reach the Ferrata della Grotta di Tofana remaining on the path 404 that leads to the Ferrella Lipella. We reach the saddle where on the right the path branches off to reach the Ferrata Lipella and the Ferrata of the Castelletto Galleries. We also ignore this crossroads and we stay on the path 404 reaching the Forcella Col dei Bos that gradually turns northwards entering the Val Travenanzes closed between the Tofane on the right side and the Fanes Dolomites on the left. We continue north until we meet a saddle on the right that allows us to reach theobvious rocky bastion where the Ferrata Scala del Menighel (2h 30 'from the Rifugio Dibona) will be developed.

The via ferrata is divided into two very similar sections. The first section begins with a long series of brackets long with one curvature in the terminal part that come up in diagonal to the left on initially moderate then more vertical slope. The climb does not present technical difficulties being a sequence of steps however theexposure quickly becomes apparent. We reach one ledge where it is possible to watch without pressure beautiful waterfall which drops one hundred meters to the left of the route. The climb is always characterized by same brackets with slope to the right and greater verticality. We end the ascent of the second section with which the equipment ends and with it the Scala del Menighel - the first ferrata built in the Cortina area (20 'from the start - about 3h total).

The return takes place in a ring bypassing the Tofana di Rozes. We are now under the north wall and begin a stretch of steep climb on the path 403 in the direction of the Giussani Hut. The climb takes place with a series of hairpin bends in constant ascent leaving behind the Val Travenanzes and the Lagazuoi. Finally we reach by bending towards the south Giussani Rifugio (2580 m - 1h from the end of the Ferrata Scala del Menighel).

We now begin the re-entry along the path 403 strait between the Tofana di Rozes and Punta Anna descends to the Dibona Hut (1h from Rifugio Giussani - 2h from the end of the ferrata - 5h total).

The Menighel Ferrata della Scala is a via ferrata that probably does not in itself deserve the long approach and return, which is rather tiring and long. However the environment in which it takes place is majestic and even with modest difficulty it allows it to be traveled by hikers even with moderate experience. The via ferrata is exposed however easy.

The Menighel Ferrata is often combined in descent with the Ferrata Lipella ascending to the Tofana di Rozes. Staying at Rifugio Giussani you can reach the Ferrata del Formenton at the Tofana di Dentro so how can you get off at Aided path Olivieri.

The Ferrata can also be traveled on a route that includes the Ferrata degli Alpini at the Col dei Bos. From the Rifugio Dibona it is also possible to undertake the Aided path Astaldi.

In the direction of Passo Falzarego, we can instead take the Ferrata Tomaselli, the recent one Via Ferrata Fusetti at Sass de Stria and the Ferrata to the Averau.

Traccia GPS per Ferrata La Scala del Menighel. Itinerary: as per description above. 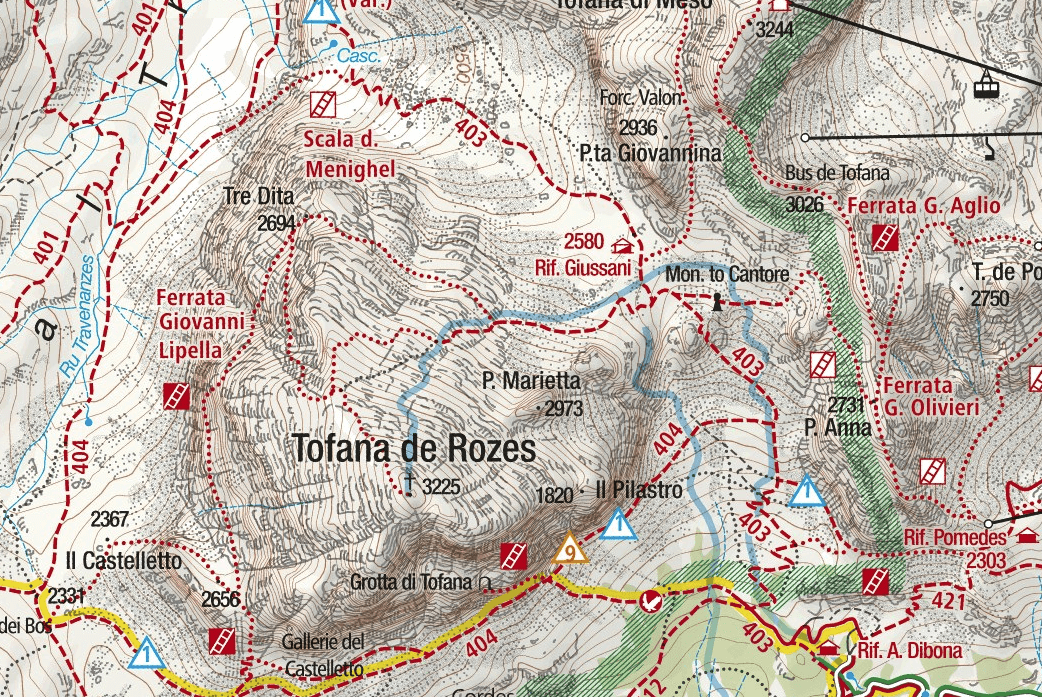 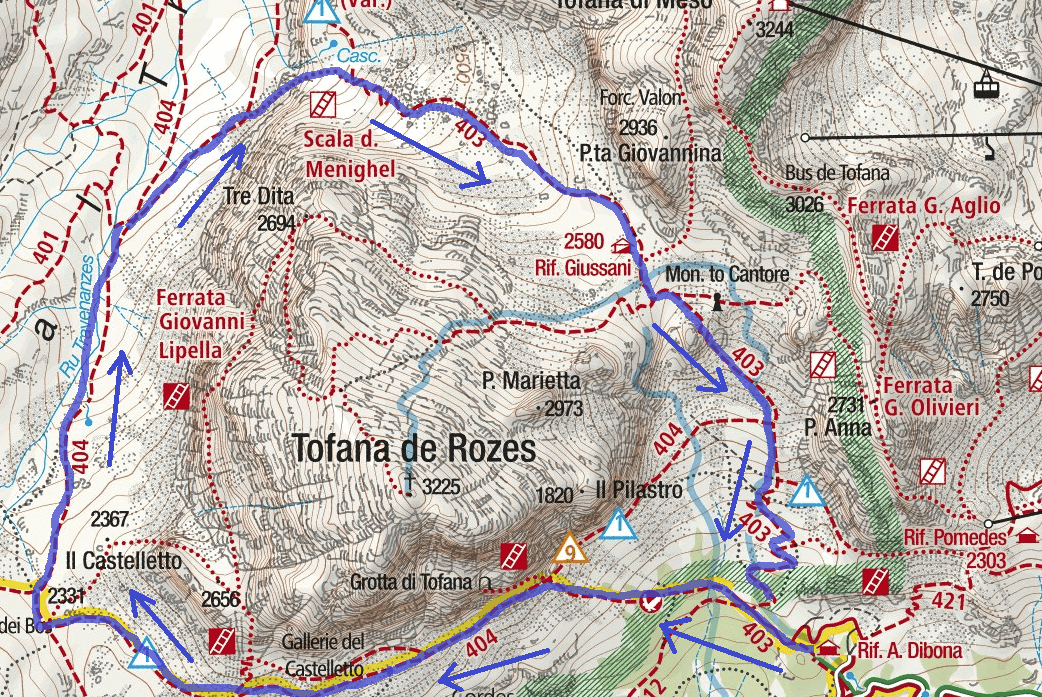 Images Ferrata La Scala del Menighel. The images included in the report were sent to us by the users of the site. If you are interested in sending us photos, use the form on the left or send them to our Facebook page. 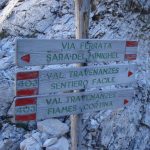 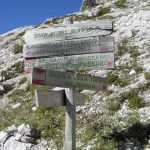 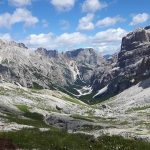 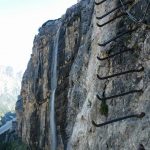 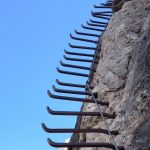 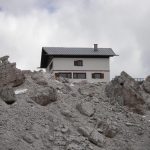 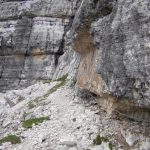 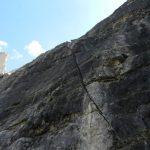 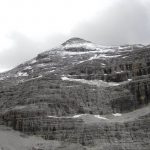 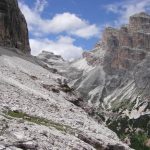 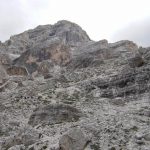 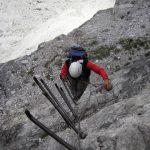 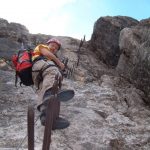 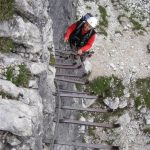 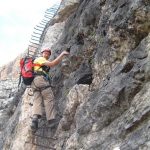 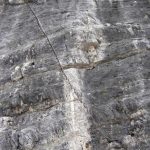 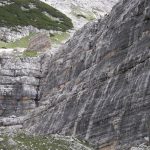 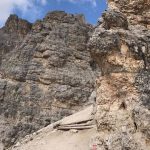