Review of the Ferrata Severino Casara that connects the eastern and western slopes under Cima Dodici (Croda dei Toni) in the Sesto Dolomites. Very challenging and tiring high mountain itinerary if you are on a day trip. Exposed itinerary but without significant technical difficulties in the aided sections. Passages in a spectacular environment in the presence of some of the most impressive and daring Dolomite peaks.

The starting point of the itinerary is the Hotel Dolomitenhof in Val Fiscalina reachable in a south-right direction if you come from Sesto - from Moso to Val Pusteria. Directions for Google Maps available here.

It is also possible to take the route starting from the South in Cadore (Auronzo). However the path climbs very steep and the itinerary from Pian della Velma is closed for landslides (2017). If necessary, contact the Carducci Hut for updates on the path's viability.

Departing from the car park at the hotel (1454 m) we follow the wide cart track (marker 102) which continues southwards. We follow the signs for the Rifugio Valle Fondo (1548 m - 30 'from the start) which we soon reach by going up the lower part of the Fiscalina Valley. The trip changes from this point. We always follow signpost 102 in a south-westerly direction to a junction where we will keep to the left taking path 103 in a south-east direction with signs for the Comici Hut. The trail runs on the left side of the Val Fiscalina Bassa making us constantly gain altitude in an increasingly impressive and Dolomite environment. It is worth pointing out the ridge on the opposite side of Val Fiscalina where the Ferrata Strada degli Alpini extends. We continue along the path 102 up to reach with difficulty but without difficulty the Comici Hut (2224 m - 2h 30 'from the parking lot). The Comici Hut will be reached on the way back and the approach stretch just traveled will also be retraced to the return.

We will now continue in a wonderful environment in the direction of the Carducci Hut. We keep the path 103 that proceeds in a southerly direction with the impressive north face Cima Dodici (Croda di Toni) straight ahead of us. Path 103 initially descends slightly to the left until reaching Forcella Giralba (2431 m) where we will descend in the direction of Carducci Hut and of the Val Giralba while to the right we will notice Forcella Croda dei Toni point from which we will return to the end of the Ferrata Casara. The descent takes place by debris valley without particular difficulties and we reach the Carducci Hut (2297 m - 1h from the Comici Hut - 3h 30 'total), starting point of the our itinerary marked as Trail 107 "Severino Casara Aided path".

From Rifugio Carducci we follow the signs for path 107 and a little above the hut the metal equipment starts. Initially we cover a slender ledge on a detrital ground and at times slippery that runs along the south east face of Croda de Toni. The ledge is followed by alternating aided sections and sections of only the path up to the junction at Maria saddle (2351 m - 45 'from the Hut) between the old route 107 (closed for landslides) and the recent via ferrata. The equipment now leads us on a display however not difficult to cross to the left which leads us to a first suspension bridge. The bridge has the rope on the left side and wide and stable wooden sleepers for the feet making its passage exciting but not difficult or exposed. After crossing the bridge, the crossing continues horizontally bypassing an edge on a slender ledge that continues even on the opposite side. We continue along the ledge without gaining nor losing a significant altitude although some sections are light aided rocky jumps with solid brackets and change are present.

Towards the middle of the route we gradually go around the southern edge and begin to walk north-west along stretches of ledges that are always aided, not difficult and exposed on the steep Val Gravasecca and stretches of a simpler path, even if not aided, not difficult but on land in some friable and insidious points. After a few simpler minutes we reach again the rocky bastion under which the our ledge. We cover a stretch on one steep ramp with the cable to our right at the end of which we ascend a short jump and resume the path on the ledge. We continue without apparent difficulties except for the exposure in the unprotected sections and we carry under a very characteristic rocky roof where the key passage of the route is present.

We continue below the rocky roof in strong exposure on the left side up to reach a narrow passage to do on all fours (Passo del Gatto). The passage of per se uncomfortable but not difficult is exciting for the exposure on the left side. We complete the passage and leave this roof on a short series of rocks followed by a new ledge. We go around an edge and straight to us about 200 meters higher Forcella de l'Agnel, half of the via ferrata which, at the expense of appearance, will still be far away.

The ferrata turns sharply to the right with which we go up a series of pleasant rocks where it will be possible to continue climbing. Earned these meters rather vertically we continue towards theinside of a gorge up to catch a glimpse of a suspended bridge at the end of a ledge. The bridge is very well structured with large wooden sleepers and, compared to the previous rope also left side to increase its stability. Compared to the previous one however is more exposed and the vertical jump below us is a couple of hundred meters. We pass on the opposite side of the gorge, we climb a short jump with the aid of two pegs and we continue along a ledge that comes out of the gorge. We continue on the ledge up to take a downhill stretch on an unstable ground in the direction of the gully.

This section currently makes a detour with climbing ropes upwards to get around a landslide that in 2017 has partially destroyed the via ferrata which is formally closed. This trait in the current conditions is difficult and requires experience - not to be underestimated. See "Notes" below.

Reached the canyon we will have to go up the steep scree which leads us to some sporadic red and white signs De Toni Shelter with her spartan red construction and a few meters higher up to the Forcella de l'Agnel (2490 m - 2h 30 'from Rifugio Carducci - 6h total).

To complete the ring route up to the Comici Hut we will have to reach the Forcella de Toni crossing the western face of the Croda de Toni along the hillside. Initially we lose altitude from the saddle along a steep gully with a thin track and rather landslide terrain. I went down about a hundred meters continue along the hillside and ignore the two tracks that in different points descend into Val del Marden towards Giralba. We continue north to a hollow in which - depending on the years and from the point of the season there is a snowfield. A rope helps us make us safe, go up the detrital saddle e climb a few meters further. We get up a few meters and begin to walk along a detrital ledge first and a stretch of path on the ridge (wide) until we reach the Forcella dei Toni (2524 m) where a pole and a yellow sign indicate that we have finished the path 107 Ferrata Severino Casarà (1h from Forcella de l'Agnel - 7h total).

On reaching Forcella Croda dei Toni (2524 m) we begin the long descent and return to the parking lot. At the saddle we descend on the scree that goes down to the right under the north wall of Cima Dodici. After a few meters of steep descent we ignore two tracks of trail that run eastwards to the right. These traces are connected to the path traveled to the first leg ascending to Forcella Giralba. We continue downhill, passing under the steep bastions of Collerena and after a stretch along the hillside we see the Comici Hut on the right. We reach it and from that point we stay on the path 103 that backwards for the first leg path that takes us back to the parking lot (3h from Forcella dei Toni - 10h total).

We suggest taking the Ferrata Severino Casara in this verse mainly to travel uphill the steep and slippery stretch between the end of the via ferrata and Forcella de l'Agnel and Bivacco De Toni. This steep stretch is insidious due to the amount of unstable debris and the action of water and landslides that made it slippery. With this clarification, the via ferrata is viable in both directions. The equipment is recent and in excellent condition

The Ferrata Severino Casera does not offer technically difficult passages but the high mountain environment, the long itinerary and high altitude make it a very demanding and difficult trip. We will have to pay attention to the section that connects Forcella de l'Agnel and Forcella Croda dei Toni in case of fog or low clouds as they we will have to identify the rope attachment which will help us pass the snowfield even in late season. The snowfield is secured by a rope and for this reason it could be considered running along it even without crampons although for greater safety it may be appropriate to have them with you.

The Ferrata Severino Casara was subjected to a major landslide in 2017, detached from the Witzenmann Tower, making the via ferrata unusable, obliging it to return without continuing. The landslide came off hitting the last few meters of via ferrata on the slope of the Forcella de l'Agnel. It was partially put in safety (mountaineering ropes) in July 2017 and it is to be hoped that it will be completely safe for the following season. Due to the actual state of things and the viability of the route, it is advisable to make contact with the Comici and Carducci Huts.

The area of the Sesto Dolomites and del Cadore is very rich in aided routes. The Ferrata Severino Casara extends on the southern slope of the chain. From Rifugio Carducci it is possible to proceed eastwards and follow the Ferrata to the Ferrata Cengia Gabriella possibly proceeding in the direction of Via Ferrata Roghel which ends at Rifugio Berti. Rifugio Berti is the starting point of the itinerary that leads along the Val Popera to the Via Ferrata Zandonella to the Croda Rossa di Sesto from which it is possible to descend by the Ferrata ai Costoni by Croda Rossa. From the Rifugio Fondo Valle encountered both in the approach and in the return if you take path 102 along the Val Sasso Vecchio proceed towards the Tower of Toblin where we meet the Ferrata Hosp or of Monte Paterno where we meet the Innerkofler via ferrata. These are just some of the aided itineraries that can be combined with the Ferrata Casara in a multi-day itinerary in the Sesto Dolomites. 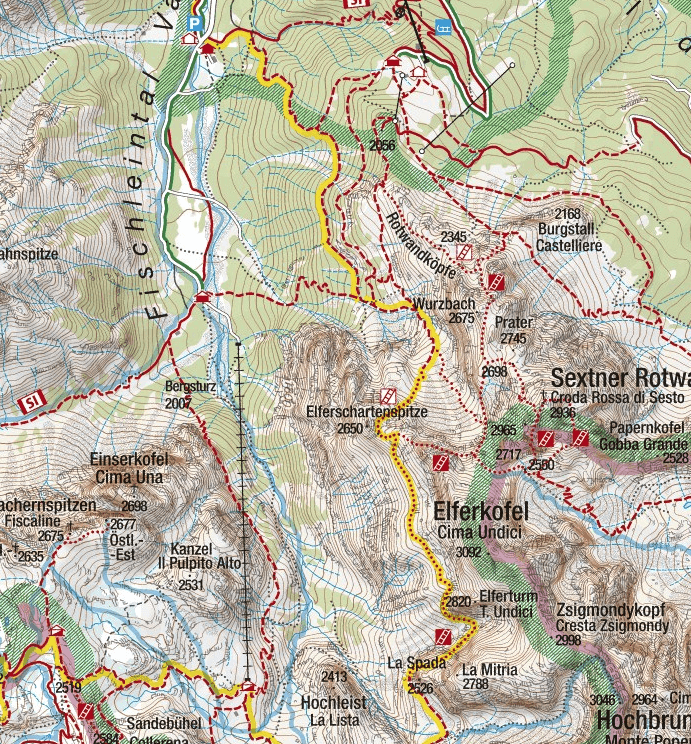 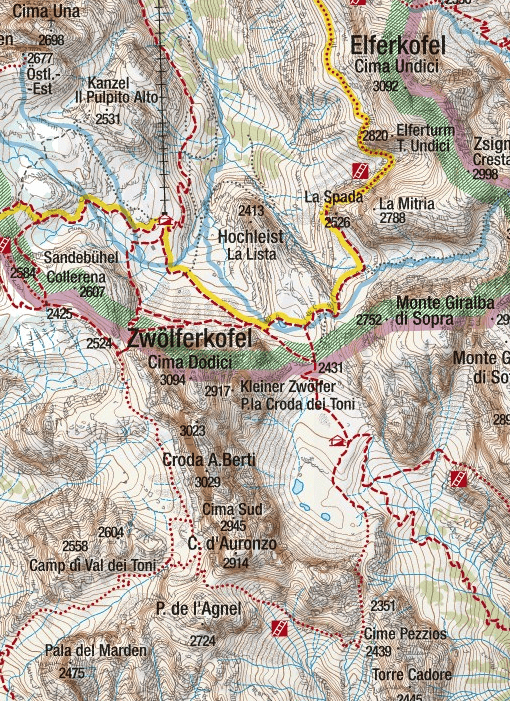 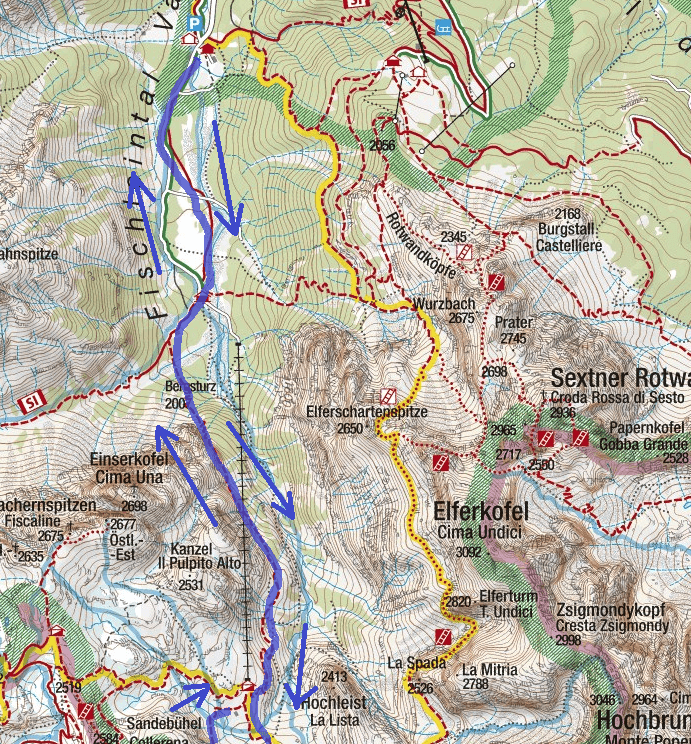 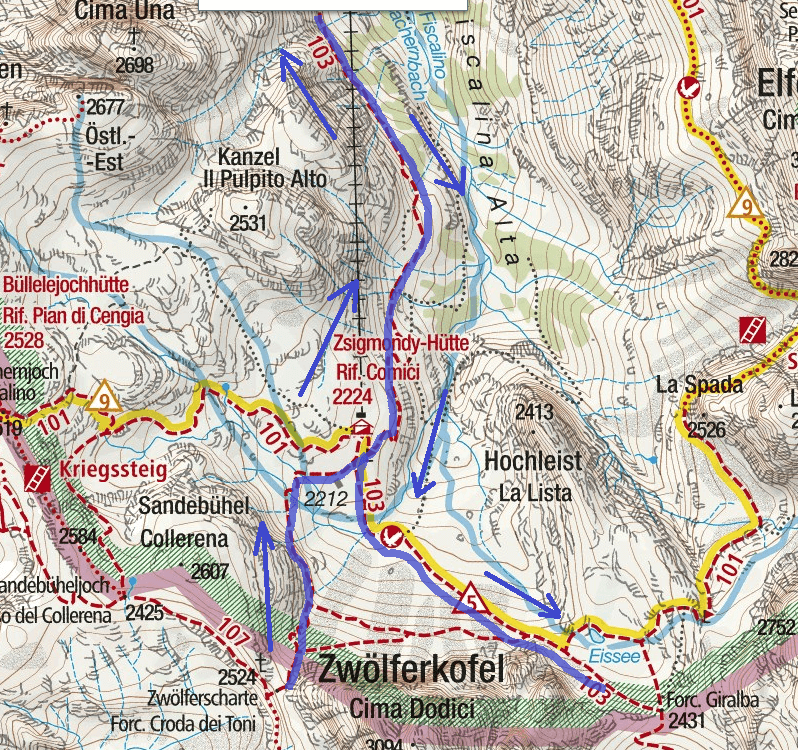 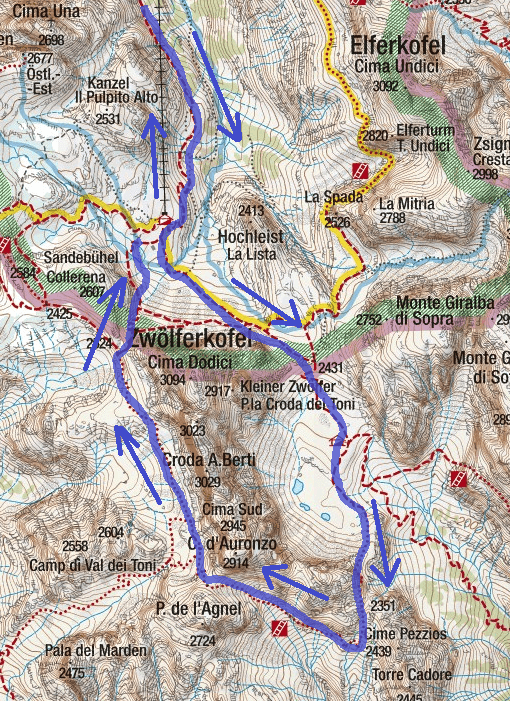 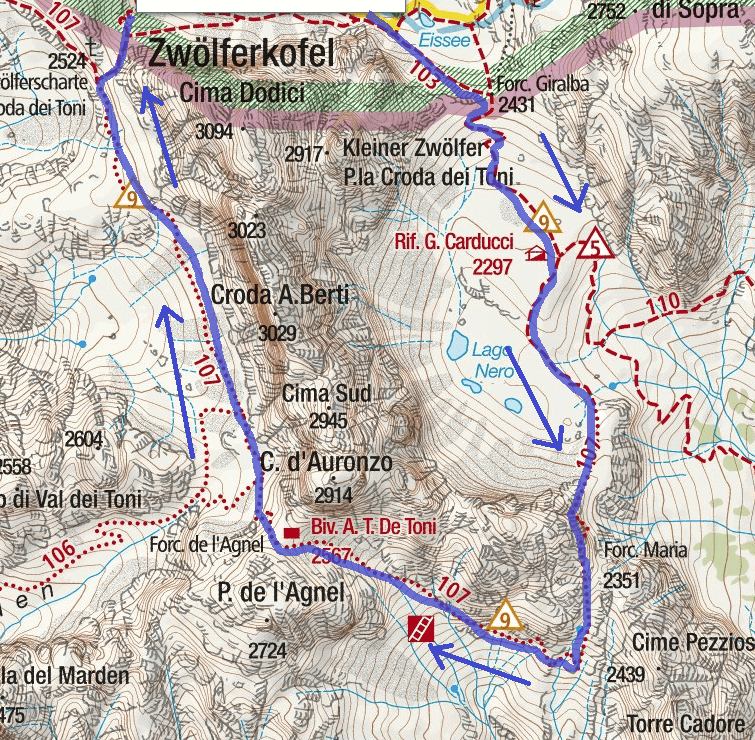