The Ferrata Spigolo della Bandiera is a via ferrata that extends on a exposed edge near Monte Spino on the west coast of Lake Garda. The via ferrata is aerial and requires an athletic momentum in a passage given the difficulty in reaching natural holds. In other sections the excellent rock allows for fun climbing. The via ferrata is relatively short and it used to fit perfectly together with the nearby Ferrata Ernesto Franco (now dismantled and subsititute by a climbing crag).

The starting point of the itinerary is San Michele near Gardone Riviera on the Brescia side of the Lake Garda. Once in San Michele we go towards Val di Sura. We reach the Colomber Restaurant near a saddle in the road. Here we have two options:

From the parking lot to the restaurant we continue on the small road to the left and then we follow the wide path / narrow road until we reach Voghere, we pass it and follow the CAI path 1. We climb the wide path fording the Barbarano stream twice and we will reach a saddle: CAI25 / 1 Bis goes up on the left which we ignore as we continue straight on to CAI 1. Attention in these you look to follow the CAI signs that sometimes confuse. In particular we will notice a well marked track going up to the left of the stream. Let's ignore it and wade again. We continue on the CAI 1 path with constant slope until Cascina Gemelle (950 m - 1h from the parking lot) where at the junction we will keep the left uphill with indications to the Pirlo allo Spino hut and for the ferrata, while the CAI continues straight ahead. We climb the steep path that soon leads us to a signposted junction where on the left we take the Ferrata Spigolo della Bandiera (1h 10 'from the parking lot).

The Ferrata Spigolo della Bandiera starts with a medium difficulty traverse to the left towards a vertical wall on the right side of a corner. The wall is fairly tight but a couple of steps are challenging due to the small grips present. We come to a nail that can be considered a grip and from that moment the edge becomes less difficult with greater grips for hands and feet. This second half of the edge is, although aerial and exposed, very pleasant and climbing. The rock is very jagged and suggests us to climb but we need to pay attention to the stability of the blocks of rock that are sometimes a little unstable. We then reach an earthy terrace where it is possible to stop comfortably.

We always continue on the edge, now pleasant and gabled (pay attention to the shrubs) going out on a stretch of aided path. We go up some easy rocks and we find ourselves on the right of the edge where we go up an unmarked chimney full of natural supports and holds. We go out on a well-enclosed wall that takes us on a very exposed and iconographic stretch of the route. We are in front of the edge in its terminal part, very aerial and we have to go up it again near a narrow crack. We will have to help ourselves with a small rocky pillar behind us that will allow us to gain those two meters that reach the only bracket present. This bracket will not exclude having to probably pull on the cable for a couple of single steps (very exposed) to go up the last part of the edge coming on the top ridge that we will cover on the left side. This last section is exposed but not difficult and in short the cable serves mainly as a handrail. They end the equipment shortly and we follow the path up to the summit flag which concludes the Ferrata Spigolo della Bandiera (30 'from the start - 1h 40' total).

From the end of the road we follow the more marked track to the left towards the Pirlo Hut or to the right to proceed towards the Passo dello Spino.

From the Pirlo Hut, if you want to return to the car, you can opt for the very direct path that will take you back to the saddle where we followed for the ferrata and then return to the car (3h total). Alternatively we can follow the path up to the Passo dello Spino first, seeing on the left the start of the Ferrata Ernesto Franco and then continue following the CAI 1 up to the crossroads encountered on the outward journey (3h 30 'total).

The last alternative is to follow the wide forest road that leads us back to the Colomber Restaurant between wide hairpins and a moderate slope. In this case you must have left the car at the restaurant (4h total).

The via ferrata is short but, bearing in mind this aspect, it is exposed and can be a good test bench after the first easy via ferrata to test its preparation for more demanding routes. The Ferrata is vertical, with traits without natural or artificial grips, with the result of having to raise one's arms and use a little athleticism. There is strong exposure along almost the entire route with a peak in the last pass before the final ridge. The rock is however good and in many parts it gives the idea of stability and of being able to be climbed.

If, on the other hand, you return to the car and want to continue to other aided routes, you could opt for the Aided path Sperone del Crocefisso or head towards Lago di Idro where one of the various aided itineraries could be chosen for the Via Ferrata Crench or for the neighbors Ferrate Fregio and Ferrata delle Ginestre. 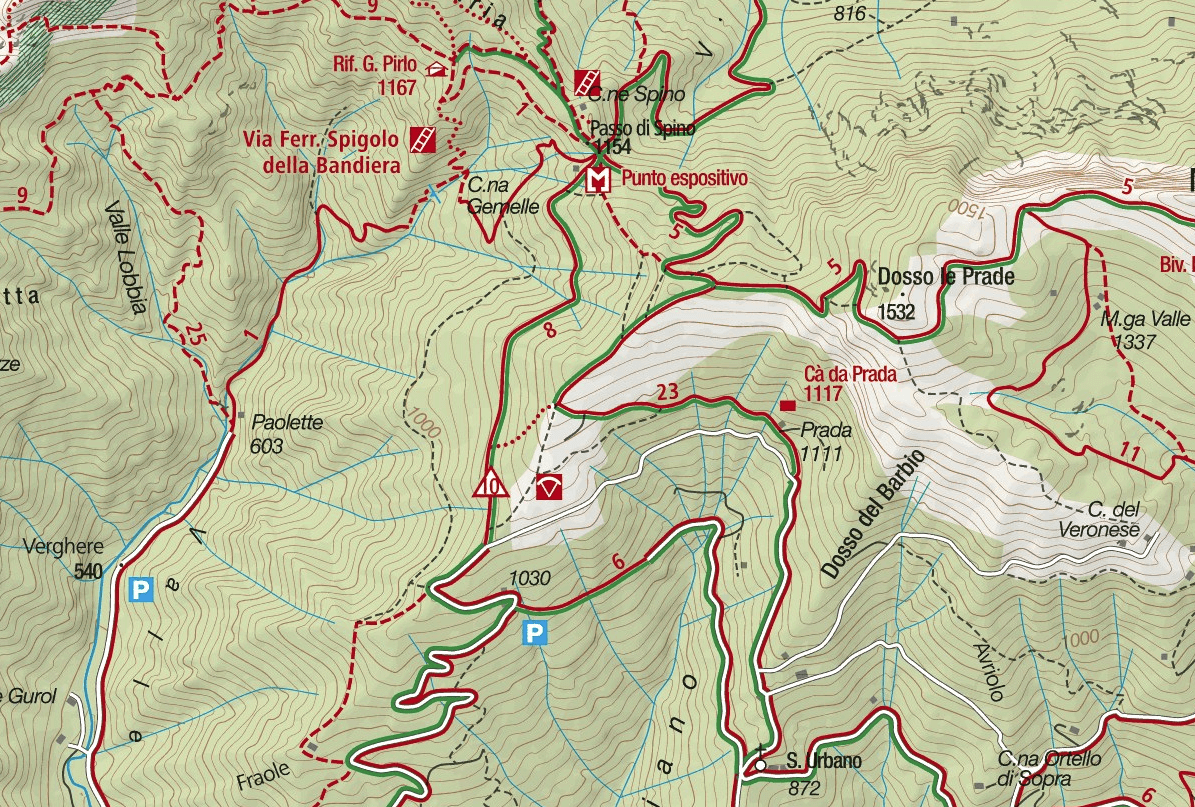 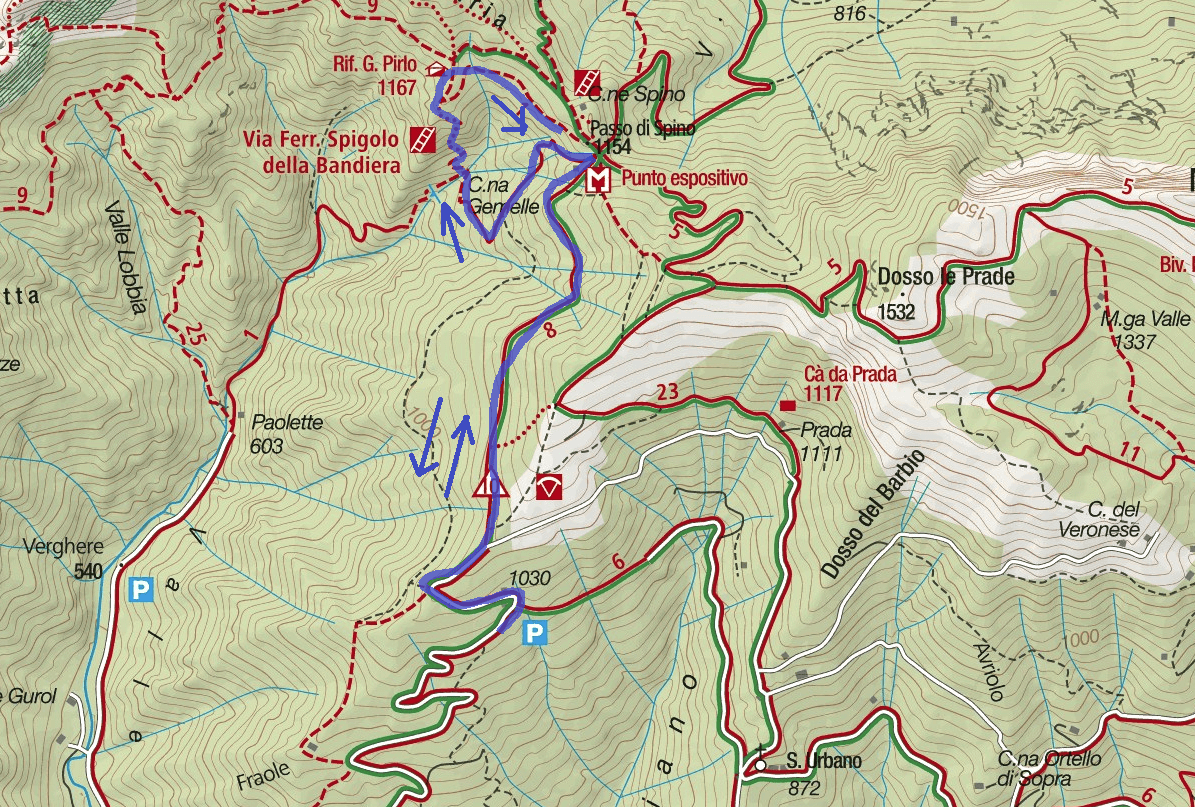 Ferrata Images Edge of the Flag. The images included in the report were sent to us by the users of the site. If you are interested in sending us photos, use the form on the left or send them to our Facebook page.