The Ferrata Strada degli Alpini (literally "Alpini Korps Road Via Ferrata") follows a wonderful itinerary in the Sesto Dolomites going up the eastern slope of the Val Fiscalina Alta from the Rifugio Comici up to Forcella Undici. The itinerary is very beautiful and for large stretches it does not present particular difficulties although exposed. Very long ring route with a high gap. To prepare with care with respect to the weather and to travel if well trained and in good condition.

The starting point of the itinerary is the Hotel Dolomitenhof in Val Fiscalina reachable in a south-right direction if you come from Sesto - from Moso to Val Pusteria. Directions for Google Maps available here.

Departing from the car park at the hotel (1454 m) we follow the wide cart track (marker 102) which continues southwards. We follow the signs for the Rifugio Valle Fondo (1548 m - 30 'from the start) which we soon reach by going up the lower part of the Fiscalina Valley. The trip changes from this point. We always follow signpost 102 in a south-westerly direction to a junction where we will keep to the left taking path 103 in a south-east direction with signs for the Comici Hut. The trail runs on the left side of the Val Fiscalina Bassa making us constantly gain altitude in an increasingly impressive and Dolomite environment. It is worth pointing out the ridge on the opposite side of Val Fiscalina where the Ferrata Strada degli Alpini extends. We continue along the path 102 up to reach with difficulty but without difficulty the Comici Hut (2224 m - 2h 30 'from the parking lot).

From the Comici Hut continue on the path 103 in a southerly direction, then downhill to the left (south east) towards Forcella Giralba on the left side with respect to the impressive mass of Cima Dodici (Croda dei Toni). Before reaching Forcella Giralba we meet a saddle to the left along path 101 which continues towards Monte Popera. We climb determinedly towards a saddle beyond which we descend a few meters before meeting a crossroads where the normal part for Monte Popera starts on the right. We continue northwards along the hillside until you reach the ledge where there is the start of the Via degli Alpini Ferrata (1h from the Comici Hut).

The initial section of the via ferrata has some easy rocks and then extends along a panoramic ledge carved into the rock - called Cengia della Salvezza and dating back to the war period of the Great War. Let's continue initially on a stretch of ledge very large, sometimes not aided until it reaches the most iconic point of the road: the ledge turns sharply towards a recess of the rock and we follow it we go around from the inside. Characteristic is the view from the inside with an image that recalls one Sword. We go out on the opposite slope and after some rocks we continue along the ledge that continues between modest up and down along the west face of the offshoots of Cima Undici. We continue along a path that offers us wonderful panoramas on Cima Dodici, the Val Fiscalina where lower down we see the Comici Hut spent a few hours before approaching. In this first section of ferrata the ledge is generally wide and, despite thehigh exposure of the precipice to our left, we proceed without problems. Near a rocky roof, we lower ourselves to pass over one wooden walkway and we continue along the ledge until we reach a recess where there is a waterfall and, depending on the season, a snowfield. We continue on the ledge now generally without protection, starting a uphill stretch on a detrital surface. We pass a new snowfield uphill and reach an old wall of military origin where the first section of the route generally ends (1h 45 'from the start - 5h 15' total).

We continue now on an unprotected section of ledge that runs along a long stretch without difficulty climbing up a slight slope to Forcella Undici (45 'from the end of the first section - 2h 30' from the start - 6h total) where the Via Ferrata ends of the Alpini with a magnificent panorama that spans 360 degrees on the Croda Rossa di Sesto, Cima Undici, Cima Dodici and westwards Cima Uno up to catch a glimpse of the Locatelli Hut in the distance.

From the Saddle Eleven we will have two return options:

The Ferrata Strada degli Alpini does not have technically demanding sections for the first two thirds of the itinerary. It extends mainly on well-aided ledges (exposed). From Forcella Undici whether you go down to the Sentinella Pass or straight down into the Val Fiscalina you have some vertical stretches. In the descent to Passo Sentinella there are sections that are considered to be medium-difficult when downhill and, in general, some unprotected passages exposed and in which a firm foot is needed.

The trip is long and after Rifugio Comici we will not encounter other points of support until we return. Considering that it extends just under 3000 meters it is absolutely necessary to follow it with stable weather. Last note on the snowfields. It may be useful to have crampons with you if the snow fields are still present and, as generally happens, have hard snow and therefore potentially dangerous snow.

The Ferrata Strada degli Alpini is an itinerary that cuts the central part of the south-north direction Sesto Dolomites. The itinerary is long and it may be convenient to combine it with other itineraries for multi-day trips. A classic itinerary consists of combining the Via Ferrata Roghel, the Via Ferrata Cengia Gabriella in the direction of Rifugio Berti - Rifugio Carducci and then use the Ferrata Strada degli Alpini to return to Berti from Val Popera. Another itinerary can include the climb to the Croda Rossa di Sesto for the Via Ferrata Zandonella - with start just below Passo Sentinella - and descent to Sesto from the Ferrata dei Costoni by Croda Rossa. 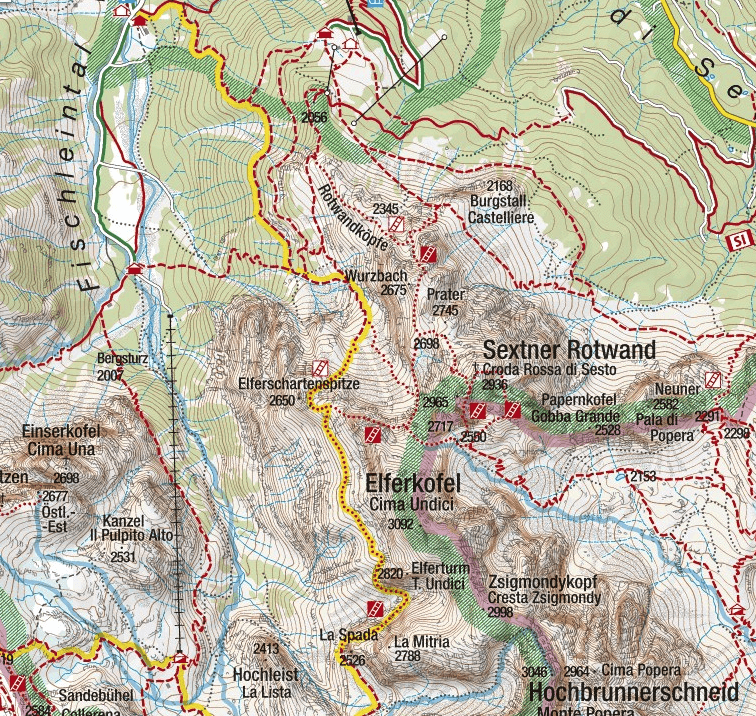 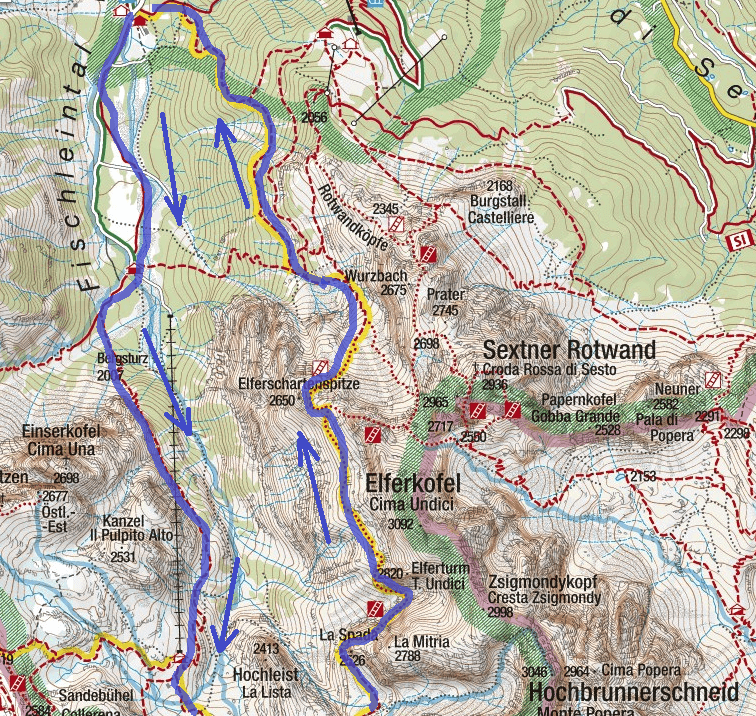 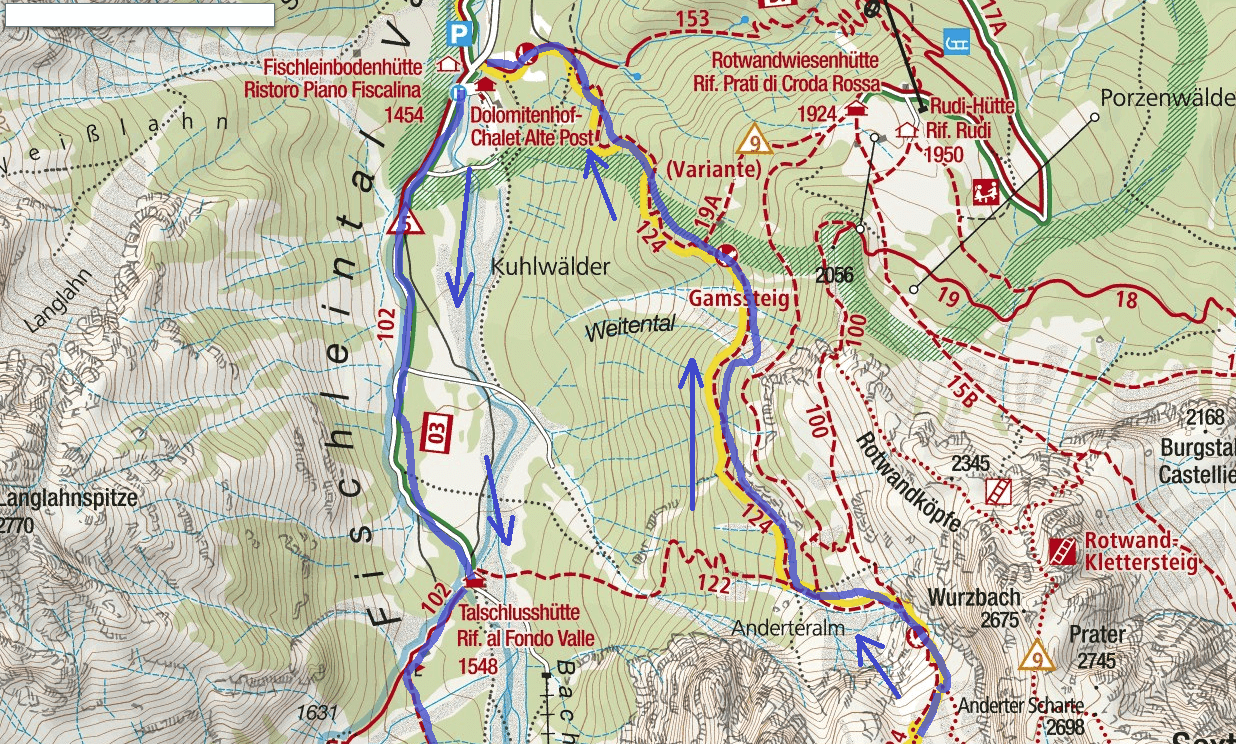 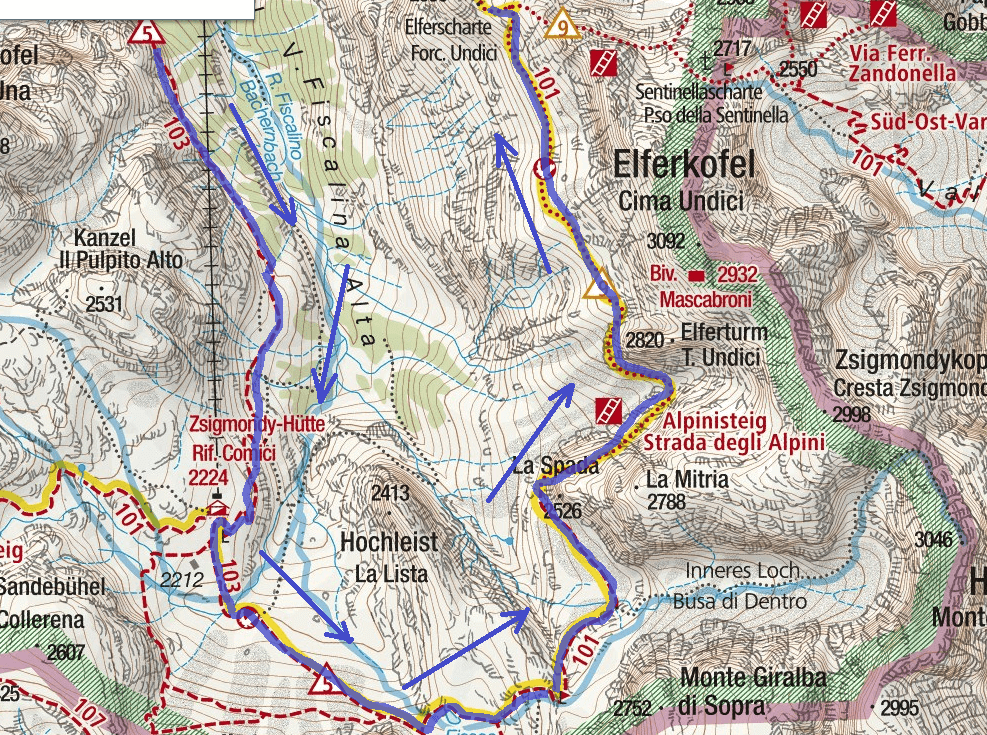 Images Ferrata Strada degli Alpini. The images included in the report were sent to us by the users of the site. If you are interested in sending us photos, use the form on the left or send them to our Facebook page.