The recent and very difficult Ferrata Tabaretta climbs to an impressive rocky wall on the north side of the Ortles under Punta Tabaretta. This route combines extremely difficult technical difficulties with a high mountain itinerary that requires high physical and mental preparation. There are no escape routes and the route has many difficult stretches of which some are extremely difficult. The panorama in which it extends is remarkable and it will rise over 3000 meters with the north wall of the Ortles at our side along the whole climb.

To reach Solda you generally exit the motorway at Bolzano Sud and continue to Merano. We then continue in the direction of the Stelvio Pass up to the signs for Solda on the left. Directions for Google Maps available here.

From the top station of the cable car we follow the CAI 10 path that goes up halfway up the hill to a junction where we will keep the left taking the CAI 4A path. We continue westward, bypassing the north wall of the Ortles which rises above our head. We continue without difficulty until we reach the CAI 4 path and go up a few bends until we reach the Tabaretta Hut (2556 m - 45 'from the top station of the cable car), ideal starting point for the trip.

Behind the hut, the trail marked "Ferrata - North Wall"that going halfway south-west towards the north wall of the Ortles and leads us to thestart of the via ferrata under an impressive rocky bastion (15 'from the hut - 1h from the top station of the cable car).

The ferrata starts by climbing some rocks near an edge. After these first easy steps we begin to climb this edge gaining exposure quickly and begin to face a situation that will accompany us along the rest of the way: a few holds for hands and feet that will force us to pull on the rope to climb. Once up this corner we are on a small rocky terrace where we go down a couple of meters and then go up a dihedral. We go up the dihedral in strong exposure and once we exit we continue on a diagonal slab that takes us to a small terrace.

In 2019 the original start - described above - was modified and made more challenging. You go up one wall of a hundred meters which, with accentuated difficulties, is grafted onto the small terrace. This section is vertical, exposed and poor in both grips and supports for hands and feet.

At this point we go up some rocks to the right before going up a vertical slab beyond which we make a short traverse to the right before climbing a narrow corner. At the end of the dihedral a rocky roof forces us to cross to the left near a crack in the rock. This is a first tiring stretch of the climb in which the strong exposure is added to objective traits of physical commitment. After the traverse, the vertical part of the rope goes up a stretch with a few slightly overhanging holds. Back up this we are on a new small terrace where you can see the gap that has already risen and the Downhill Tabaretta hut and theOrtles behind us and in which it is advisable to restate before proceeding.

We now go back to the vertical for a few meters before bending diagonally to the right and following a difficult and challenging upward traverse with very few handholds that will put us to the test. This is the famous one Geelen Knott which represents the key passage of the route. This stretch needs to be traveled quickly and with strength of arms, avoiding temporizing so as not to burn your arms (a quickdraw or webbing in this passage is useful. The crosspiece extends under a rocky roof over which the cable is vertical with a new rope to the right in a stretch that is always poor with holds, we pass these first meters and find a point where it is possible to catch your breath before starting again vertically.

Climb up a few vertical meters, go around an edge and proceed along a fairly appealing vertical stretch, reaching a large terrace from which a short ledge starts, where it is possible to breathe again and study the vertical development of the following meters. We go up a slab of about twenty meters using some comfortable protrusions of the rocks. We go up some easy rocks and find ourselves in a first stretch leaning up to a new smooth slab where we will have to pull on the cable to proceed. We cross to the right in strong exposure and we start again vertical in one of the most climbable sections of the route. We cross to the right and continue the climb, which is now less difficult than before.

However, this easy stretch is quickly interrupted and starts again on fairly smooth slabs with which to gain height again. After this stretch we find ourselves on a fairly easy stretch of ridge compared to the average of the route. After this stretch of connection we reach the book of signatures and face the last stretch of the route. Let's start on a climbing and exposed edge. We go through an exposed horizontal traverse but not particularly difficult beyond which we climb a new vertical wall in which we have to climb up a small protruding roof which, given the previous efforts, will put us to the test again. We continue vertically always on the edge of the edge and then follow a challenging upward to the right but definitely more appealing traverse of the underlying Geelen Knott. The traverse takes us under a difficult dihedral. This corner, like other parts of the route, is airy and lacks obvious grips. The best grips are on the right side of the corner where the dihedral extends, however they will not be enough to proceed without using the cable at least in some points. Back up the dihedral we go out to the left in a vertical passage but more appealing than the dihedral. We are now on a small terrace where it is possible to rest for a moment before starting again vertically on a slab beyond which we are on a stretch of rocks before climbing a short chimney. We go up a few meters of rocks, a vertical slab without difficulty and soon the metal equipment ends and with them the Ferrata Tabaretta.

We cover a path between gravel and pebbles to connect us to the ridge path that goes from the Payer Hut to the Ortles and we are at the highest point of the itinerary (3076 m). To our right we will see the Paye huta few meters lower. We follow the ridge path and reach the Payer Hut (3029 m -2h from the start - 3h 45 'from the mountain station of the cable car).

From Rifigio Payer we continue following the CAI 4 ridge path that with exposed and partially aided sections we reach the Forcella dell'Orso (2871 m) where the path will descend steeply in the direction of the underlying Rifugio Tabaretta. This stretch is initially steep and then gradually more gentle until it reaches the Solda Valley (1h 30 'from the Payer Hut - 5h 15' total).

The Ferrata Tabaretta is an extremely demanding via ferrata that extends in an environment among the most impressive of the Alps in Italian territory. The itinerary is well aided but this should not lead to underestimation. The via ferrata gives no respite along its ascent and the majority of the stretches are difficult and very difficult with extremely difficult peaks (for example the infamous traverse of the Geelen Knott). The environment also requires absolute preparation with regard to weather as it extends around 3000 meters and has no escape routes before completing the via ferrata and reaching the Payer Hut (3029 m). It is highly recommended to take the via ferrata on stable weather days and in the morning.

Compared to other very challenging via ferratas (ex: Gamma 2, Pisetta) the grips are missing in different points and for this you risk to tire your arms a lot. It may be a valid idea to use a quickdraw or a webbing to rest in some difficult stretches.

The Ferrata Tabaretta all'Ortles is one of the most challenging via ferratas in the entire Alpine panorama and requires a high degree of preparation. For fans of this type of trips, always from Solda you could undertake the demanding trip to the Ferrata of the Croda of Cengles. Going up the valley as far as Naturns you could go along the Via Ferrata Hoachwool or from Merano you could travel the easiest Via Ferrata Heini Holzer. Along the Stelvio pass state road it is also possible to reach the Ferrata di Trafoi in the omonym village. Close to Merano a new via ferrata has been installed in 2020: Ferrata Ziel.

If one were interested in high altitude via ferratas in an environment similar to that in which the Ferrata Tabaretta extends, one could descend towards the Adamello Brenta Park and follow the Via Ferrata del Monte Nero with the consequent ascent to the Presanella. Moving instead towards the Passo del Tonale you can take the panoramic route Ferrata Sentiero dei Fiori. If we instead drive to the Val Passiria, we can reach the recent Ferrata of Stuller Falls.

Traccia GPS per Ferrata Tabaretta. Itinerary: as per description above. 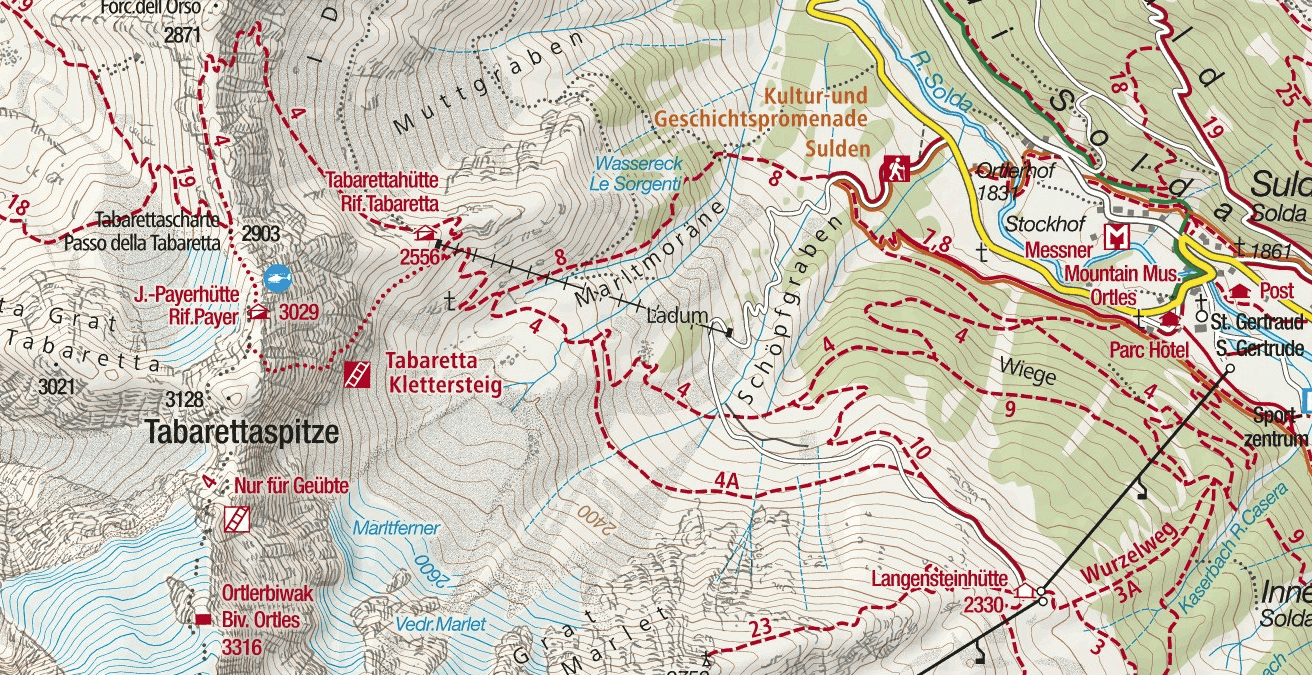 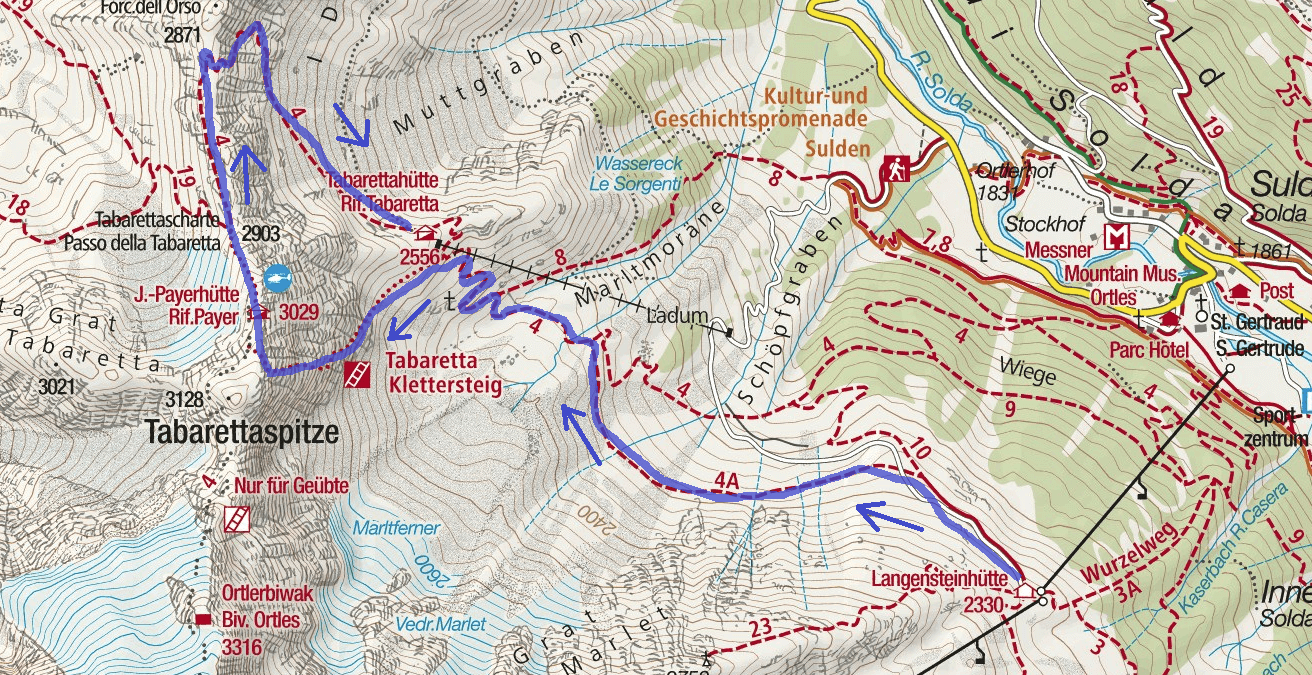 Images Ferrata Tabaretta. The images included in the report were sent to us by the users of the site. If you are interested in sending us photos, use the form on the left or send them to our Facebook page. 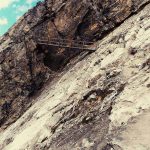 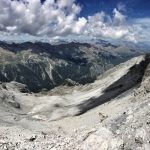 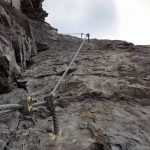 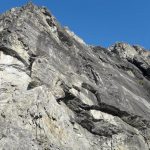 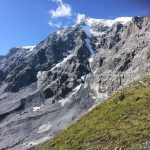 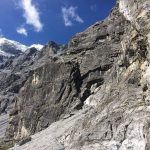 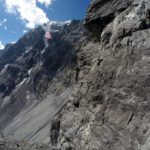 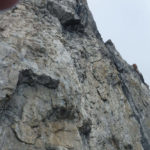 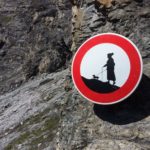 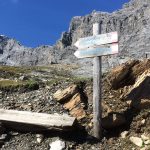 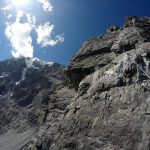 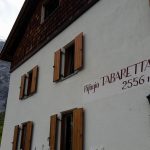 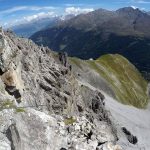 Weather Ferrata Tabaretta in the locality of Solda (Bolzano).