The Ferrata Tomaselli is a vertical ferrata, challenging with exposed and technically difficult passages that go up the west face of Punta Fanes Sud. The climb is rather short but very intense with a series of athletic passes that require experience and strength. Magnificent panorama from the summit over the Tofane and the Dolomites of Badia.

The fastest way to reach the Ferrata Tomaselli start is to reach Passo Falzarego (2105 m) and take the cable car ascending to Rifugio Lagazuoi. The Falzarego Pass can be reached from Cortina d'Ampezzo, from San Cassiano in Val Badia or from Alleghe (Belluno). At the pass we park in thelarge square near the valley station. Directions for Google Maps available here.

We climb to the top station of the cable car near the Rifugio Lagazuoi (2752 m). We continue towards north going down with the path 401 following the indications for the ferrata in the direction of the Forcella Lagazuoi (2573 m - 15 'from the hut). Although it is possible to reach the via ferrata also keeping to the right towards the Forcella Travenanzes, we suggest keeping the left with the path 20 in a slight slope. We reach a crossroads where we keep to the right the path 20B which runs halfway up the west face of the Grande Lagazuoi. Then we reach where the old man was once installed Shelter della Chiesa (2655 m - 1h from the hut), currently dismantled. From this point thestart and any other hikers struggling with the beginning of the via ferrata. We follow the indications and the track to the north that under the wall leads us to thestart of the Tomaselli Ferrata (1h 15 'total).

The Tomaselli Ferrata presents the key passage close to the start. After i the first few easy steps we face a very challenging stretch. The first meters are characterized by a crosswise that initially rises diagonally on a smooth wall that will stress your arms considerably. After the first few meters uphill we will have to go down 2-3 meters in a very exposed passage which will be followed by a horizontal traverse on smooth rock for later go up 4-5 meters. These first passages of the trip are selective and it is advisable to proceed with determination without delaying too much being the rock poor of holds and soliciting the arms. We leave the traverse reaching a small terrace where it is possible to take a breath and start again vertically.

The rock is always quite smooth and the development is now vertical but less demanding than the first traverse. The wall that we must climb is now vertical and exposed with not always easy holds and steps to be calculated well. After climbing the 20 meters of challenging wall, the upper part becomes more clinging and we reach a detrital terrace where we can turn and admire the view.

We now climb a stretch of exposed and unprotected path that gives us some altitude with some hairpin bends. We reach a large panoramic balcony and the path continues to climb towards the wall of Cima Fanes. We walk to the left a new ledge that after a latch on narrow and exposed stretches leads us to the new beginning of the metal equipment.

The second section of the Ferrata Tomaselli it starts horizontally along the ledge and then goes up one series of rocks initially quite supportive and tiered. We travel one new ledge exposed and not protected to the right in the direction of some ometti beyond which we go around an edge and reach the beginning of the third section of the way there will lead to the summit. In this section we will have to pay attention not to follow to the left the continuation of the Ferrata alla Cengia Veronesi. We hold the ledge to the right in the direction of a vertical jump. The beginning is on one slab which offers good holds. Now let's go vertical with always challenging passages sometimes assisted by pegs at the points where the rock is completely devoid of support. Then we reach another characteristic passage of the route: a long aided dihedral that extends near one deep slit in the rock.

The dihedral starts rising on the left side of the crack. The first meters are vertical and the poor rock is attached. The distance also from the wall that closes the dihedral makes it impossible to use to climb into a split. The first few meters you will climb by pulling on the cable until the crack - diagonal - approaches and we will find some holds. The rope crosses the dihedral and we, following it, move to the right side where there is a very comfortable bracket. The dihedral rises very vertically now and moves to the left side. It remains very demanding and aerial. but there are more holds in the central area compared to the first meters. The upper part of the dihedral becomes more and more airy and runs on the right side of the crack. This offers some holds for the climb. The long and challenging dihedral ends on a small rocky pulpit in a saddle from which looking up we see Punta Fanes still a few tens of meters above us.

Now let's go up two very exposed slab initially in vertical then in diagonal until you reach the narrow ridge where with some easy jumps we reach the summit of Cima Fanes Sud (2960 m - 1h 45 'from the start - 3h from the Lagazuoi hut) with magnificent panorama at 360 degrees on the major Dolomite groups.

From the peak we continue on the track in a north-eastern direction until we start the descent that will follow one via ferrata also quite challenging. The downhill ferrata initially presents a series of vertical leaps that will be well studied going to look for the often present holds. We will also travel a sideways with a short overhanging passage in which it is necessary to move easily and without delay. Another important step in the descent is the descent inside a chimney. Providential one bracket in the middle of the chimney in a slightly overhanging passage. We reach one ledge beyond which the last vertical meters downhill to reach the gully that downhill will lead us to the Shelter of the Church (45 'from the summit - 3h 45' total).

At this point, if our goal is to return to the car using the cable car, we walk back along the same route and reach Rifugio Lagazuoi (45 'from the shelter - 4h 30' total) where the cable car will take us to Passo Falzarego.

The alternative is to stay on the left of the ridge in the direction of the Forcella Travenanzes. For a path without substantial difficulties we reach the saddle, crossroads of trails in the area, where following the path that descends towards Passo Falzarego we will reach the starting point of the itinerary, staying alongside numerous remains of the Great War (1h 15 'from the end of the aided descent - about 5h total).

The Ferrata Tomaselli is a very well marked via ferrata and it climbs up looking for the weak side of the mountain whenever possible. However, the via ferrata is very demanding and very exposed. The key passages are concentrated at the beginning (traverse and wall) and at the end (dihedral and slabs).

The downhill ferrata is not to be underestimated. It extends in the north and at high altitude so it must be taken into account that until June it is possible to meet snowy stretches. Very useful a pair of gloves during the descent.

The Ferrata Tomaselli extends in an area rich in aided itineraries and could be included in many long itineraries even several days. Among the most interesting options, there is the possibility of combining uphill or downhill from Falzarego to Rifugio Lagazuoi the Aided path Kaiserjager as well as the Ferrata of the Alpini Brigade it could be reached by deviating from Forcella Lagazuoi via Forcella Travenanzes. Extending the route, one could proceed towards the Tofana di Rozes where we meet the Ferrella Lipella and the Menighel ladder. Going down towards the Passo di Valparola we meet the new one Ferrata Fusetti at Sass de Stria. At the end of the via ferrata it is also possible to head towards the Val di Fanes where we meet the Via Ferrata of Peace or the Aided Path Tru Dolomieu. 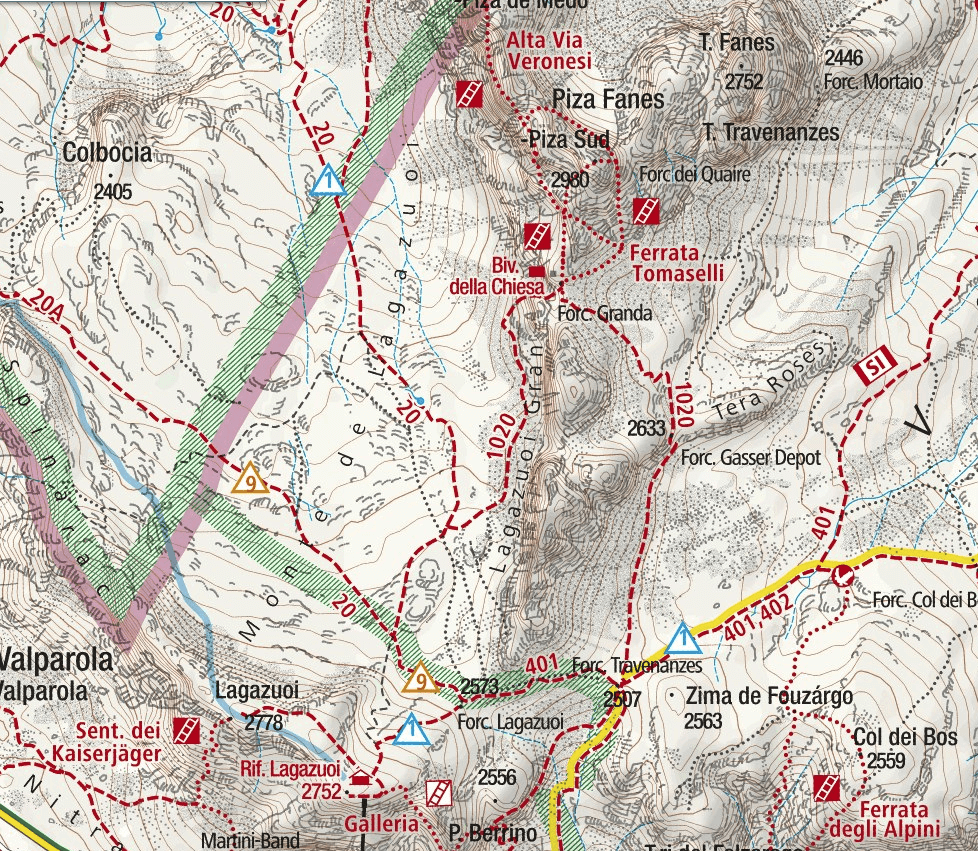 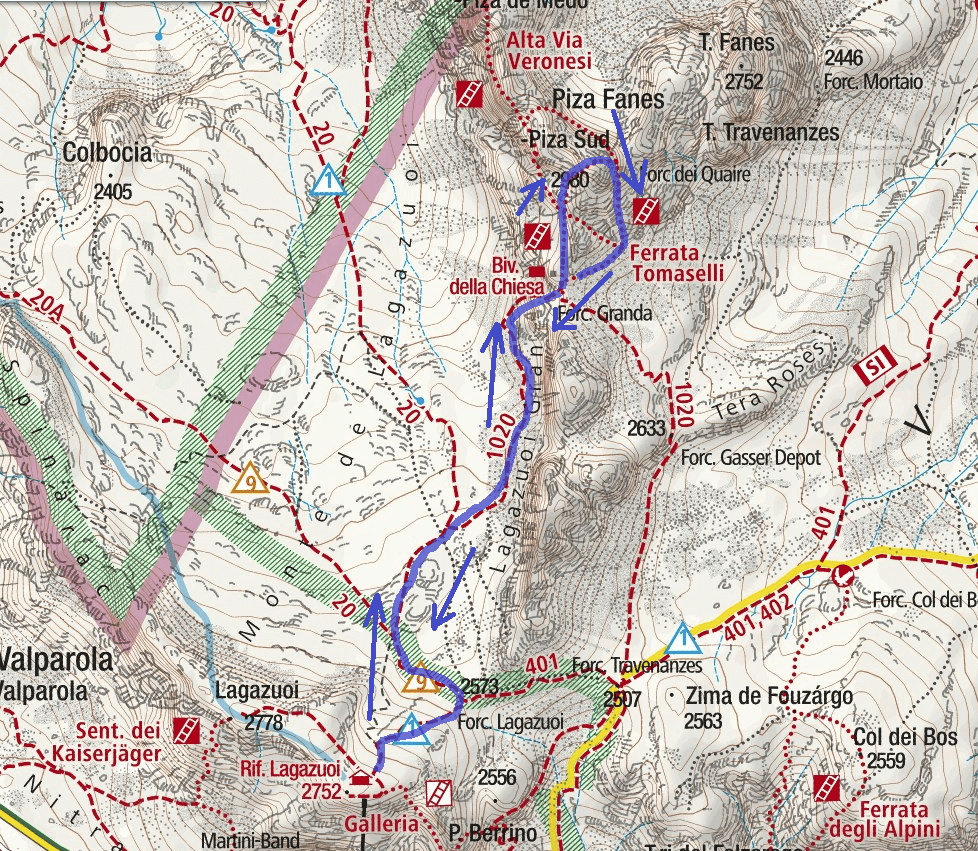