The famous Ferrata Tridentina al Pisciadù is a magnificent ferrata that extends on the north side of the Sella Group in a majestic setting. The technical difficulties of climbing are medium-low, attracting large numbers of hikers during the high season. Return to the steep valley of Val Setus.

After leaving the car, we see the impressive walls of the south Sella Group. We ignore the signposts 650 that connect the Gardena Pass with Colfosco and we follow the clear indications that to the left in an easterly direction lead us along a slight slope path to the first metal equipment (15 'from the parking lot).

The first meters of cable develop on one traverse well attached to the left followed by one series of brackets that help us go up a fairly leaning wall. We proceed again to the left on a exposed but well-traversed cross to which they follow a few meters on a vertical wall which leads us near a usually humid dihedral aided in the upper part with some metal brackets. Leaving this passage we are at the end of the first section of the ferrata where we cross the trail which descends halfway up the Gardena Pass which could also act as an escape route in the event of worsening weather. After admiring the landscape on the opposite side of the valley, we continue now always in a easterly direction along a path that leads between go up and down then a particular passage in a slit leads us to the new metal equipment a couple of meters above the slab which indicates the start of the Ferrata Tridentina (2070 m - 40 'from the parking lot).

We walk a few meters diagonally starting a long climb under aimpressive wall which, however, remains well appropriated and never too exposed. After climbing the first diagonal section we meet a first series of simple metal frames beyond which we begin a go up more verticals. The rock is very well set in this stretch and are also present some brackets and brackets to help us progress when the rock is less jagged. Let's go up beautiful vertical walls that gradually there they gain altitude. We reach a series of passages with equipment which gradually lead us to the Rio Pisciadù waterfall. We go around an edge in an air passage beyond which we climb on more comfortable rocks. We reach a traverse that we pass by walking on rungs in a decidedly exposed tract although not difficult due to the presence of metal equipment up to an escape route.

We continue on the stretch of ferrata that goes up the Exner Tower and is the most challenging stretch of the via ferrata. This first step is already challenging, making us go up a less clinging vertical wall of the previous ones until we reach a series of metal brackets followed by a dihed supported by the cable on the right and some brackets on the left with which to go up this passage. This step can be climbed if you have the patience to look for some holds on the right side of the wall. Handles that at first glance are not visible but that help a lot to progress without pulling too much on the metal cable. Leaving this corner we proceed to the right on an easy traverse until we reach one we find a metal ladder. We climb to the left on some rocks until we get around a rocky edge and finally meet the iconic suspended walkway between the Exner Tower and the las re gangway it is very stable though exposed on an abyss of several hundred meters.

Crossing the gangway we are at the final stretch of the ferrata. We climb a last vertical wall and find ourselves on a path that leads us to Rifugio Cavazza al Pisciadù (2587 m - 3h total) where ends the Tridentine Ferrata.

After visiting the Lake Pisciadù the return takes place following the Alta Via 2 that goes down the CAI 66 path in Val de Setus. The descent is steep for a debris valley with some parts are aided with ropes in which pay attention. From it descends steeply into the detrital valley until it meets a saddle where on the left it goes up to Passo Gardena. We continue downhill to the parking lot following the path (1h 15 'from the end of the via ferrata - 4h 30' total).

The Ferrata Tridentina is one of the most characteristic aided routes of the entire Alpine panorama. The relative low technical difficulties as well as a short approach make it one of the most beaten and crowded via ferratas. This is an aspect to keep in mind in July and August where there is a real risk of being trapped in traffic and crowded passages.

The Ferrata Tridentina extends into one of the most interesting Dolomite groups from the point of view of the via ferrata offering options for all tastes and abilities. Going down towards the Val Badia you can walk the Via Ferrata of Vallon and the Ferrata Piz de Lech or going in the direction of Val di Fassa meet at Passo Sella la Via Ferrata of Mesules and at the Pordoi Pass la Ferrata Piazzetta. Remaining on the Gardena Pass the two ferratas of the Cir Group meet: la Ferrata to the Piccolo Cir and the Ferrata the Gran Cir both medium easy. 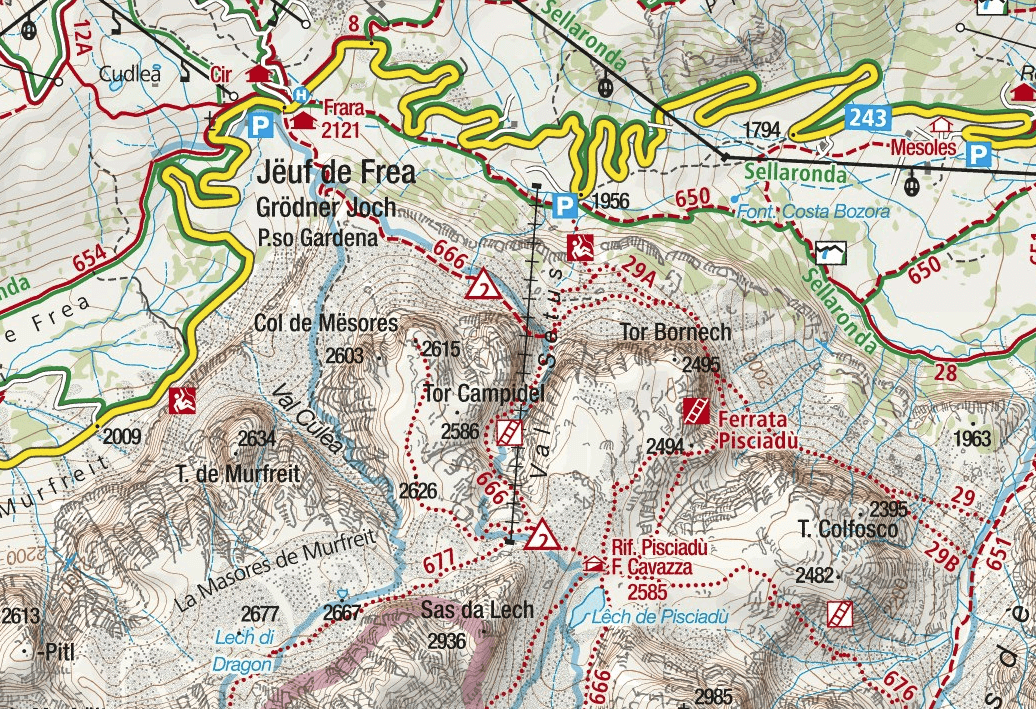 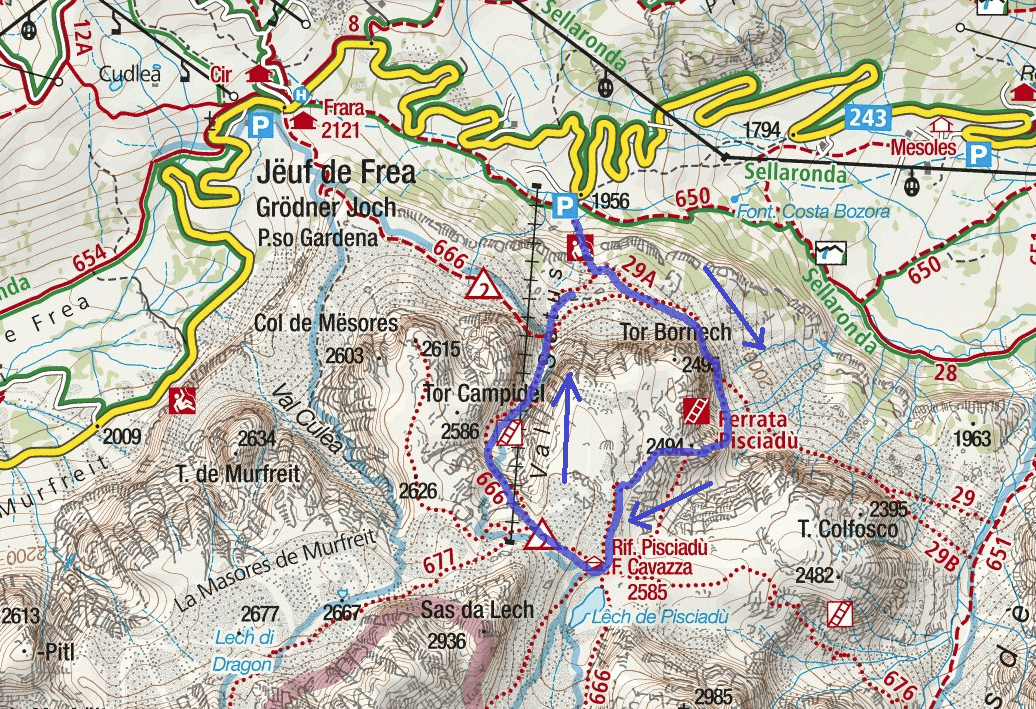