Review of the recent Ferrata of the Val di Scala (or Caoria or of the Canal San Bovo). This short itinerary is excellently aided and is ideal for getting closer to the world of aided routes, maintaining modest technical difficulties while presenting good exposure. Very beautiful and quite isolated landscape, far from the masses of tourists.

The starting point of the itinerary is on the road that connects Canal San Bovo and Caoria in the province of Trento. The road that goes up the Val di Scala. You park near a pronounced curve. The via ferrata has the start located a few meters from the road.

The via ferrata is already visible from the car park near the road. Follow the trail and in a few minutes the route starts (10 'from the parking lot).

The very first meters are immediately vertical up slab with many changes in rapid succession for about fifteen meters after which we walk a short earthy ledge to the right. The cable starts again vertically, always with the succession of metal change that leads us under a rocky roof. We win the short overhang with the cable that now runs on both sides for a few meters. We continue in again vertical on the brackets ladder to then cross to the left towards the suspended bridge. This bridge is very stable and about fifteen meters long. Very beautiful is the waterfall that runs to the right of the bridge and that, once the crossing is over, we will go to touch uphill.

We walk a short horizontal stretch to the edge of the stream and then start a series of traverse across free of difficulties but very beautiful from the panoramic point of view. In fact, we go up next to the stream which in this section makes some leaps. The equipment ends and we cover a connecting path on the path.

The cables resume near some rocks to then act as a handrail where the path narrows. We reach a stone that we ascend beyond which there is a wooden footbridge that crosses the stream. Beyond the walkway the equipment stops and we continue on the trail on the orographic left side of the stream until we reach a vertical wall.

We begin to climb the long row of metal cambrals separated only by a short section to the left. We reach a new rocky roof that this time we go around to the left with the feet that rest on brackets. This is perhaps the trait more exposed of the route. Once around the roof we set off again vertically for about twenty meters until we reach a short earthy connection. On our left side it comes down again the waterfall. Let's go back to some now always abundantly rocky leaps with short connecting sections. After climbing up the last rocks aided, the road ends (40 'from the start)

Once the ferrata is finished, follow the clearly visible track that leads to the parking area in about 20 minutes (1h 15 'total).

The recent Ferrata of the Val di Scala is a moderate difficulty via ferrata, modern in its conception of the installed equipment. There are in fact numerous metal brackets installed. Those looking for a "climbing" ferrata will be disappointed while those who appreciate verticality will still find some satisfaction despite the modest technical difficulties. The via ferrata is ideal for approaching these itineraries people accustomed to exposed trips and who want to become familiar with the aided routes. Equipment in perfect condition.

For those who are beginners, after having gone through this didactics we could move to Val di Fiemme and take the new one Ferrata del Bombasel al Cermis.

Images Ferrata Val di Scala. The images included in the report were sent to us by the users of the site. If you are interested in sending us photos, use the form on the left or send them to our Facebook page. 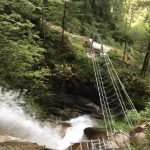 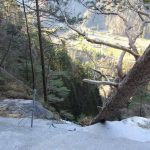 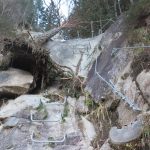 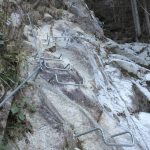 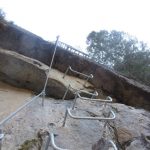 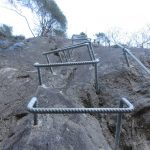 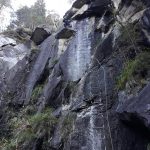 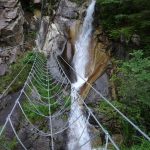 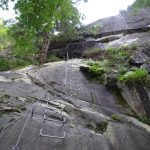 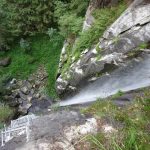 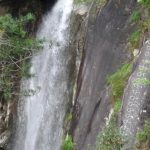