The Zandonella Ferrata at the Croda Rossa di Sesto climbs up the south face of the Croda in a short but intense via ferrata with some challenging passages without support that require good strength. Very long and tiring itinerary with a via ferrata that must also be traveled downhill.

The starting point of the itinerary is the Lunelli Hut reachable from the Belluno side of the Monte Croce di Comelico Pass that separates Sesto (Bolzano) with Comelico Superiore in Cadore (Belluno). Coming down from the pass, take Via Valgrande to the right, which we will follow until it ends or near the Lunelli Hut. Directions for Google Maps available here.

Leave the car at Rifugio Lunelli (1568 m) we follow the signpost 101 which initially in a false airy over the meadows proceeds towards the east and gradually bends southwards in a long and steep series of switchbacks to take us to gain altitude reaching the Rifugio Berti (1950 m - 1h from the parking lot) under Monte Popera in a beautiful environment. The Rifugio Berti is an important crossroads of paths in the Sesto Dolomites and we will follow the signs to the north of path 101 that goes up the detrital Vallone Popera leading to Passo della Sentinella. We continue in the long and constant ascent on the left orographic side until we cross path 124 near Lake Popera. Keep to the left and following red signs on the stones we continue uphill in the uphill valley on glacial moraine excavated by the former Popera glacier. completely withdrawn. Before the Sentinella Pass we will have to find on a big stone a red sign and a slab on the right that shows us the start of the Ferrata Mario Zandonella (2500 m - 3h from the parking lot). We climb on unstable debris reaching a ledge where little metal equipment starts near the slab with which the via ferrata begins (3h 30 'total).

The via ferrata starts with a ledge that goes around an edge on unstable material. We climb some rocks with the cable to our right gradually increasing the slope until it becomes one rather vertical wall. We reach a vertical ladder with cable on our left. We finish the ladder and the via ferrata continues very vertical on a line of ascent rather poor of holds. We rise in increasing exposure until we reach a most climbing section with good grips although very exposed. Now let's go up the most technical section of the route, or a very vertical groove with stretches at times without good grips that will require an increase in strength. This twenty-meter-long canal is the most challenging and exposed part of the road that leads us to a panoramic balcony.

On this level we meet a Italian war shelter (2835 m) dug into the rock dating back to the Great War. The effort to build an outpost in such an extreme area is incredible and absurd. We travel theexposed ledge to the left in an exposed and unprotected section. This trait, although not difficult, is adrenaline-fueled, requires a firm step and prepares us for the last complicated passage of the route. We will have to go up a short gully groove but aided with which the equipment of the Ferrata Zandonella ends. The view now opens onto the Val Pusteria and we walk a few meters to the left intercepting the normal route that soon leads us to the summit cross of the Croda Rossa di Sesto (2936 m - 1h from the start - 4h 30 'total).

The most logical descent is to descend from the eastern variant of the via ferrata which would bring us back just above the start of the via ferrata traveled to the first leg. However at present (2017) it is closed and therefore impractical. You can go back along the same route, although a couple of passages of the Zandonella Ferrata, if you go downhill, require extra attention and it might be convenient to avoid them (3h 30 'total from the summit - 8h total).

Descend to the north side which is initially aided with some ropes and a ladder. Our suggestion is to come down with the Ferrata dei Costoni by Croda Rossa and through the path 15B first and 15 then round the Croda Rossa at the base on the hillside. Then follow the signpost 171 which descends to the Lunelli Hut (4h from the summit - 8h 30 'total).

In some ways, the Zandonella Ferrata polarizes the opinions of those who travel along it. The environment in which it extends is grandiose but the trip often leaves one doubt on the approach (3h 30 ') to cover a short ferrata (ca 45') to reach a summit reachable by another ferrata (the Ferrata dei Costoni of the Croda Rossa di Sesto) shorter, less difficult and with 400 m less height difference. To this it must be added that the descent from the eastern ferrata is not possible at the moment and this requires proceeding in a long ring route. Given these premises, the via ferrata extends in a magnificent environment and the climb will certainly be appreciated even if it is tiring.

The state of the equipment in the uphill ferrata is good after a recent renovation. The cable is tighter than it was before the restructuring and this helps in the two most vertical and challenging passages lacking the supports. Attention to the fall of debris along the way that sometimes extends in a groove where discharges occur.

The Zandonella Ferrata extends in an environment - the Sesto Dolomites - with countless interesting itineraries, some of which are aided. From Rifugio Berti continuing southwards it is possible to take the Via ferrata Aldo Roghel and the Ferrata to the Cengia Gabriella. Further south towards the Cadore we meet the Via Ferrata Mazzetta at the Croda di Tacco while under the Croda di Toni we meet the recent one Ferrata Casara. These are just some of the routes on the eastern side of the Sesto Dolomites. Moving on the western side we meet the Innerkofler via ferrata, the Via Ferrata delle Scalette at the Torre di Toblin and the Via Ferrata Strada degli Alpini. 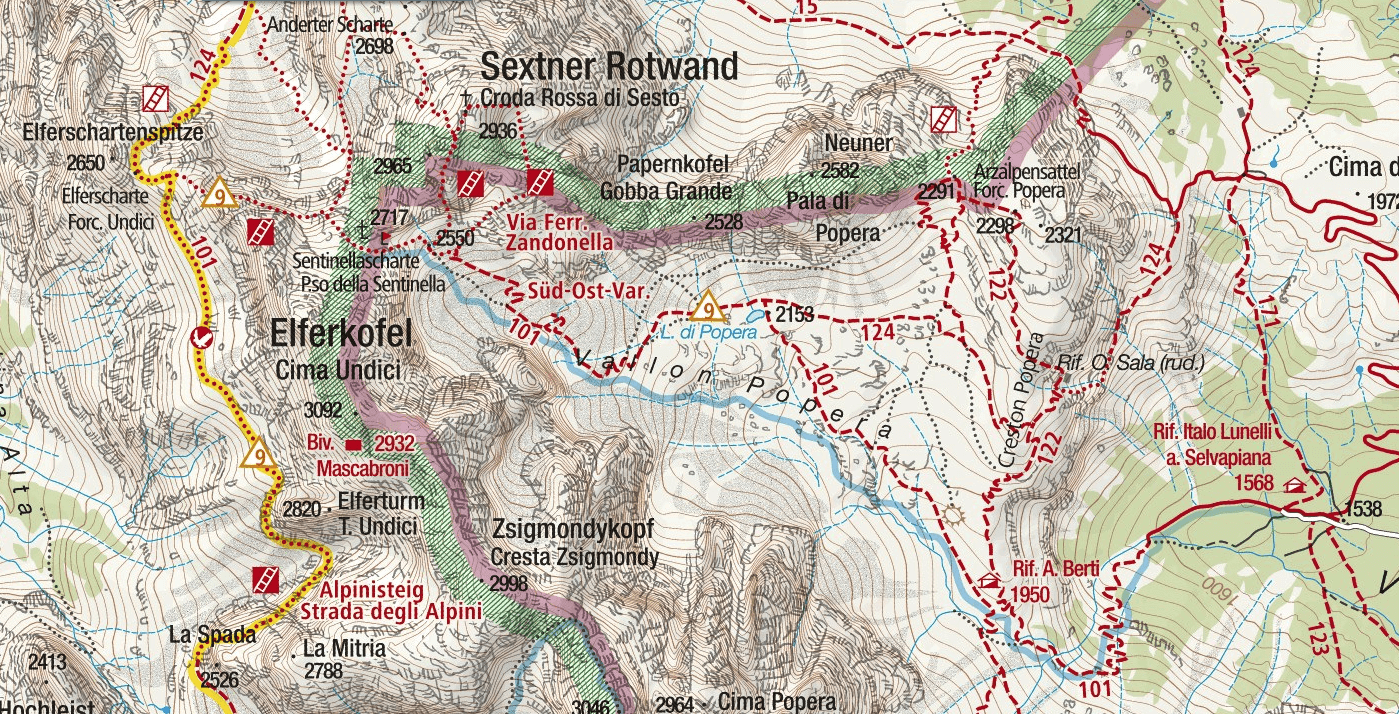 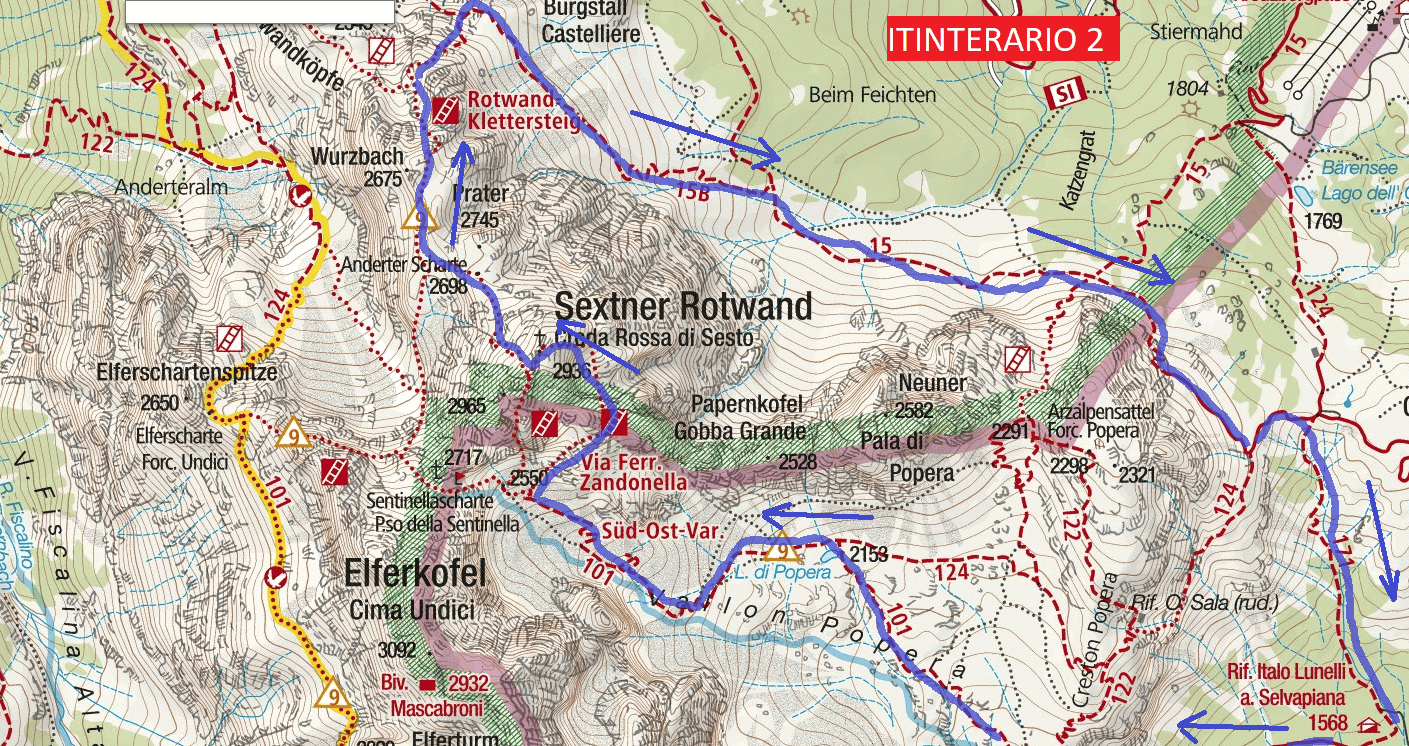 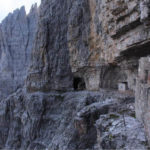 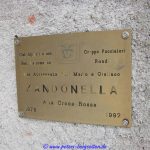 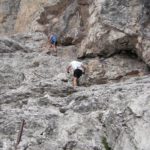 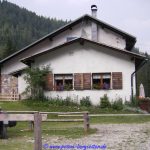 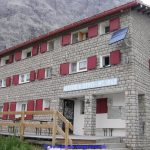 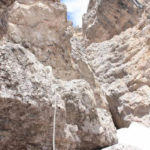 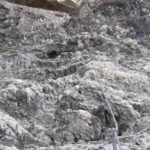 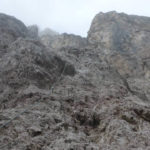 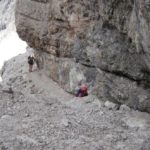 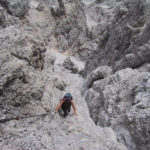 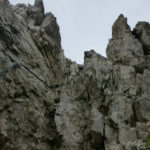 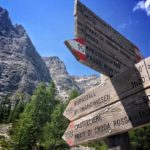