Review of the long and panoramic Aided path Ceria Merlone in the Julian Alps. Departure of the itinerary from the Montasio slabau and long approach to Forcella Lavinal dell'Orso. Long path on the ridge to complete a magnificent circular route that descends to the Brazzà Hut. Itinerary with many unprotected sections, including climbing, to pay attention to.

The starting point of the itinerary of the Aided path Ceria Merlone is located in the Montasio Plateau in a large parking lot that runs along the road that connects Malga Montasio with the village of Sella Nevea in the province of Udine. To reach Sella Nevea you must reach the town of Chiusaforte, located 20 minutes from the Carnia Tolmezzo exit in the A23. Once in Chiusaforte follow the signs for Sella Nevea towards the east. We pass the bridge and drive 20 km to the village. Once in the village, near a hairpin bend follow the brown sign for Altopiano del Montasio and follow the road until the end. Directions for Google Maps available here.

The itinerary of the Aided path Ceria Merlone is proposed here from the east (Forcella Lavinal dell'Orso) to the west (Cima Terrarossa). In this verse many aided sections are covered uphill. Traveled in this direction, the path can also be combined with the Aided path Leva (about 2 hours extra than the proposed itinerary).

Park the car (approx. 1500 m) following the signs and go up on a dirt road towards the Rifugio Brazza. After a few minutes we cross a new dirt track with a 624 signpost that cuts to the right on a slight slope. Leaving slightly uphill we continue past the Casere Parte di Mezzo first, then the Casere Larice (1479 m - 30 'from the parking lot). We remain on the path that now narrows and, after ignoring a trail to the right that goes down to Sella Nevea, we reach the Rifugio Casere Cregnedul di sopra (1515 m - 1h from the parking lot).

We continue on the path grafting on the path 625 that goes up from Sella Nevea. We keep the left uphill and continuing initially under the forest, then, aiming decidedly towards the north, we leave the wood and, cutting the southern face of the Cregnedul along the hill, we climb Passo degli Scalini (2022 m - 1h from Rifugio Casera Cregnedul - 2h total).

We pass the pass and the gaze opens on a valley. Looking up to the left we will notice the Forcella Lavinal dell'Orsa and a little above the ridge on which the Ferrata Goitan. On the opposite side of the valley stands the Canin group. We cut the valley following the track and once on the left side we follow the white red signs and we go up, not without trouble, towards the saddle. Shortly before reaching it we follow the writing on rock and the track that branches off to the left and in fact we begin the Aided path Ceria Merlone (30 'from Passo degli Scalini - about 2h 30' total).

The first objective of the route is Forcella Cregnedul and to reach it we will gain altitude (about 200 m) initially bypassing the impressive walls of Punta Plagnis. We start climbing up a gravelly bottom uphill. We meet an aided first section that helps us to climb initially some rocks, a vertical wall and finally one inclined slab. We leave behind the Lavinal dell'Orso saddle  and we continue on a new stretch of path uphill diagonally and we reach a passage inside an aided chimney. Let's go up one metal ladder with rungs leaning against the rock and, in a succession of stretches to the right and to the left we end this first strenuous stretch of ascent reaching the Forcella Cregnedul (2340 m - 1h 15 'from the start).

We continue now following the trail trail. We circumvent the south facing walls of Punta Plagnis without any particular problems on a large unprotected ledge from the east to the west side. The passages are exposed but generally wide except for a couple of saddles and rocks on the west side where the path narrows and more attention is needed. The very exposed traits have handrail lanyard.

We now face a aided stretch downhill to reach a few meters below the path. We continue on rather large and comfortable ledges until you reach the Forca de la Val (2352 m - 1h 15 'from Forcella Cregnedul - 2h 30' from the start) which separates the Modeon del Buinz from Cima de la Puartate. The landscape is very beautiful here and we go up a series of aided couloirs separated with a detrital scree to be traced. We continue south, avoiding the steep wall to the north. This is a rich trait of exposed protected ledges. We reach one clevis set and begin to bypass the southern wall of the Modeon del Buinz taking us to the Buinz saddle.

Straight to us we see the next goal to reach: the Foronon del Buinz with a shelter just below the summit. We go around an exposed ledge. At the end of the ledge we climb a short stretch on an unstable ground, we cover a ledge and we are on the west wall of the Modeon del Buinz. We now walk along a wide ridge with a track that runs on the south side slightly uphill, we go up some parts are aided with ropes of rocks and easy rocky leaps reaching the new and functional Vuerich Shelter (2531 m - 1h 15 'from Forca de la Val - 3h 45' from the start) located just below the Foronon del Buinz already visible in the distance.

From the top of the Foronon del Buinzi we follow the wide ridge, we cover a gangway and we begin to gradually lose altitude with some easy steps of climbing, in most challenging cases aided. Remarkable the panorama on the Jof di Montasio and on some bizarre shapes that the rock gives us during this stretch of the route. Keeping now on the south side of the ridge, we cover some exposed ledges generally not protected to the right and we reach a new vertical stretch. We go down a rather steep but well-aided gully. We go down some rocks and we end this stretch of the road reaching the Forca de Lis Siens (2274 m - 1h from the Vuerich Shelter).

From the wide saddle of Forca de Lis Siens the trail now runs in a false airy between modest ups and downs on the south side until it reaches the crossroads marked with writing on stone (2285 m - 15 'from Forca de Lis Siens - 5h from the start) between the climb to Cima Terrarossa and the Aided path Ceria Merlone where our aided route ends.

The Aided path Ceria Merlone is a path that does not present particular technical difficulties neither in the aided sections nor in the unprotected ones. Given this premise, the path deserves some attention because of the many sections exposed especially along ledges and gullies. The route extends at high altitude and has only 2 unmarked escape routes, although the Vuerich shelter is located halfway along the route and is in excellent condition. The first escape route is in Forca de la Val under the Modeon del Buinz going down on the scree up to Conca di Casera Cregnedul. The second is in Punta Plagnis with descent to the Plagnota. Both are quite steep and not marked so to use in an emergency. The equipment and the path marking are in good condition.

From the Forcella Lavinia degli Orsi it is possible descend on the northern side of Montasio (path 626) and is a possibility of return for those who, for example, have traveled the Amalia Ferrata going up to Jof Montasio.

The Aided path Ceria Merlone winds through a connection point between the Jof di Montasio and the Jof Fuart in the Julian Alps. The environment is superlative and is ideal to cover even for multi-day itineraries. Among the options of several days we recommend:

Moving further east along the group we also encounter the easiest Aided path King of Saxony. 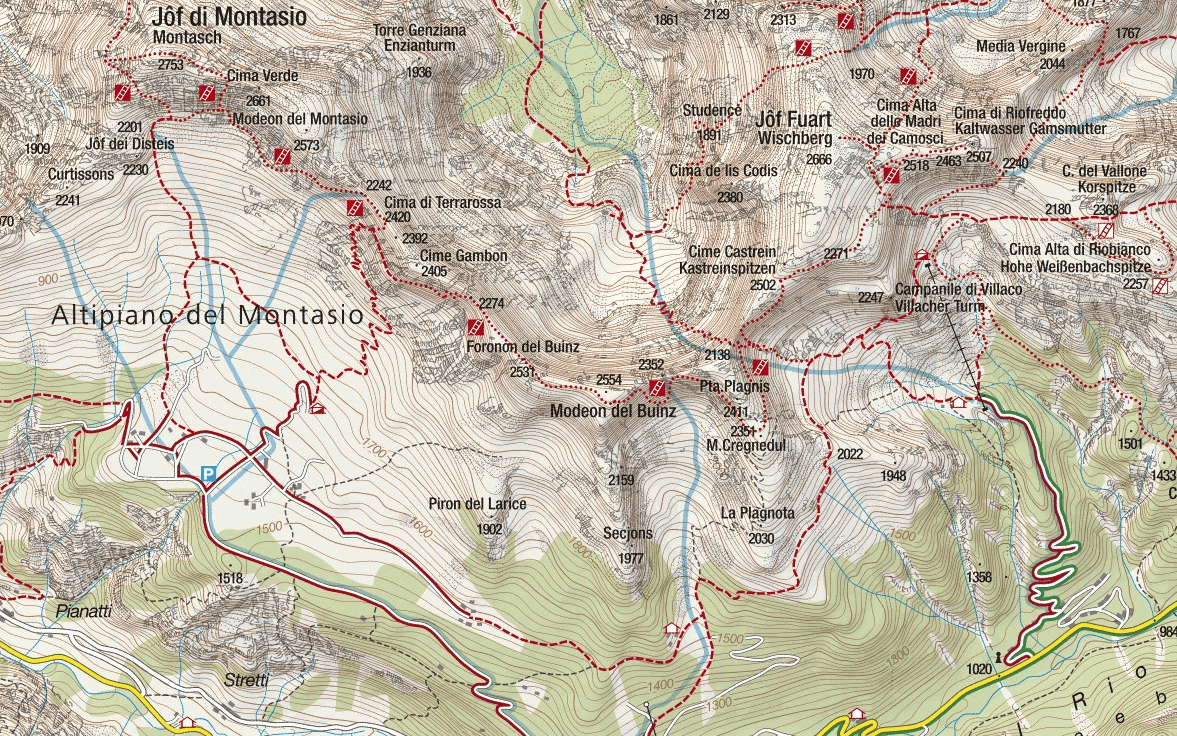 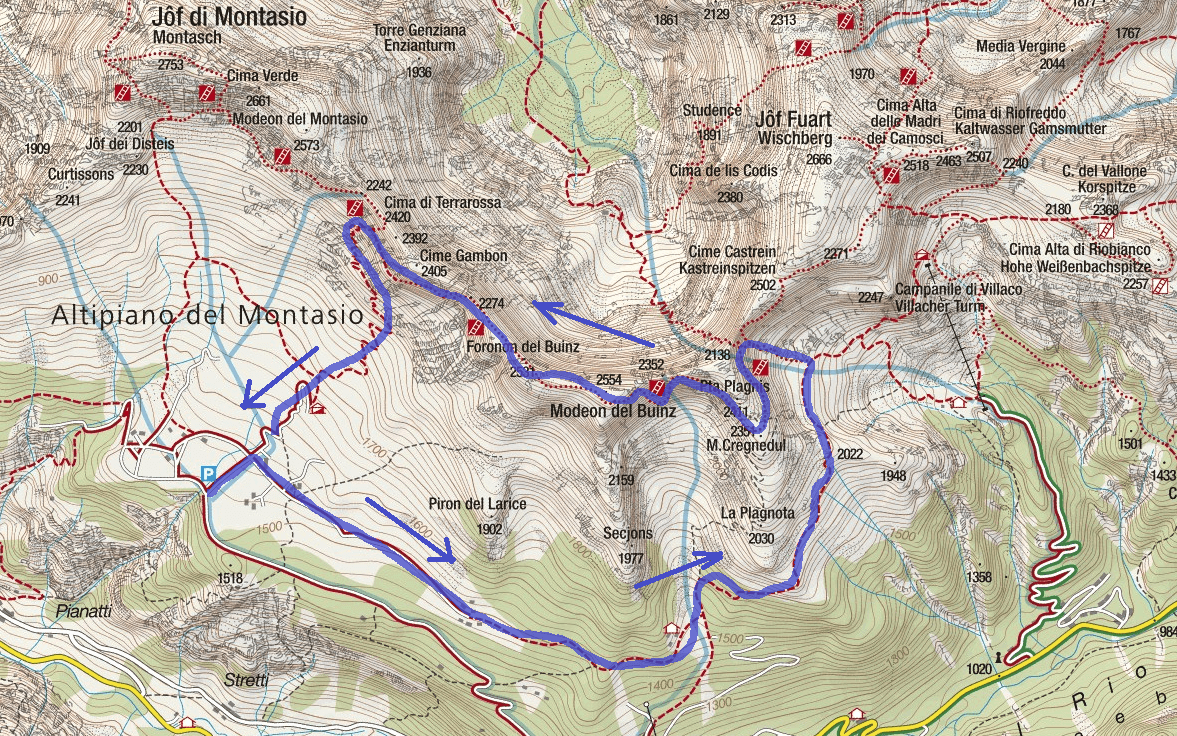 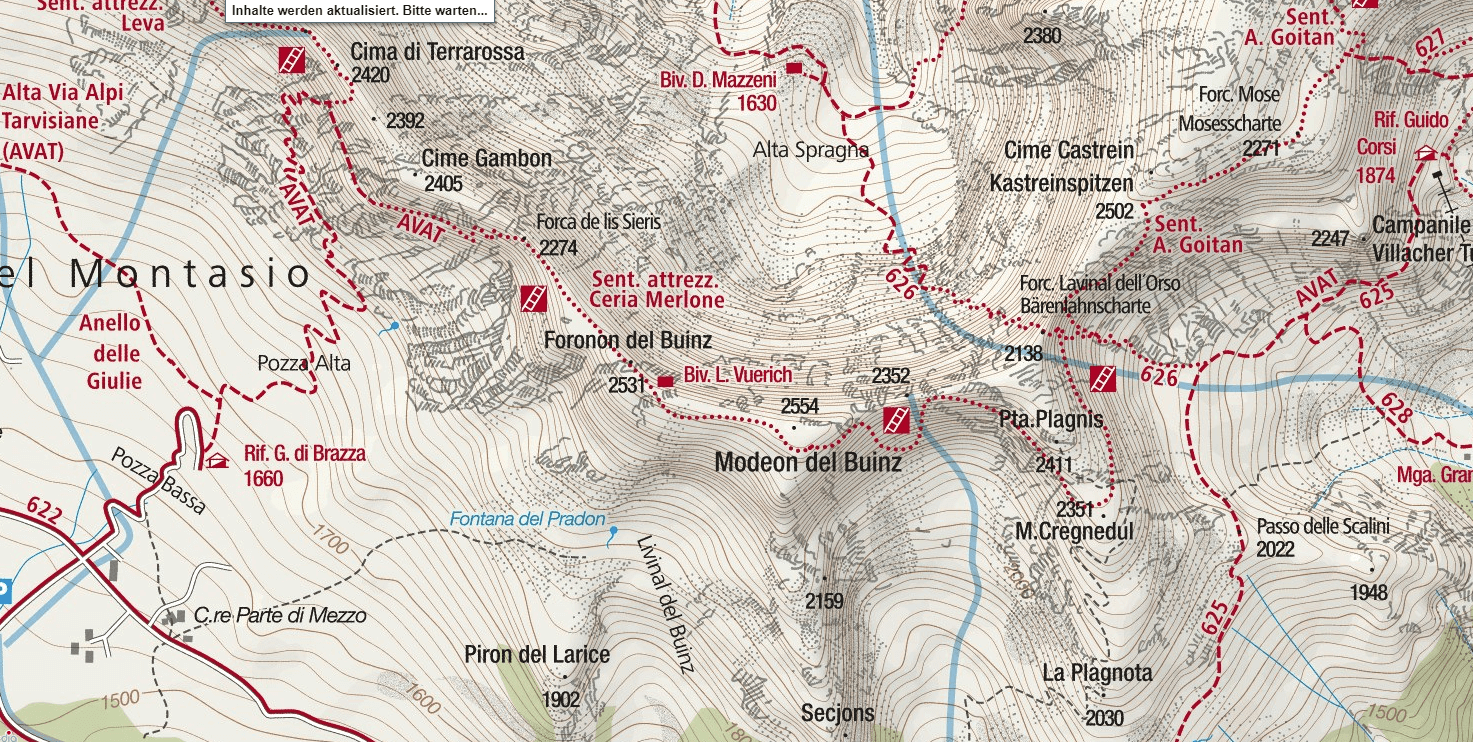 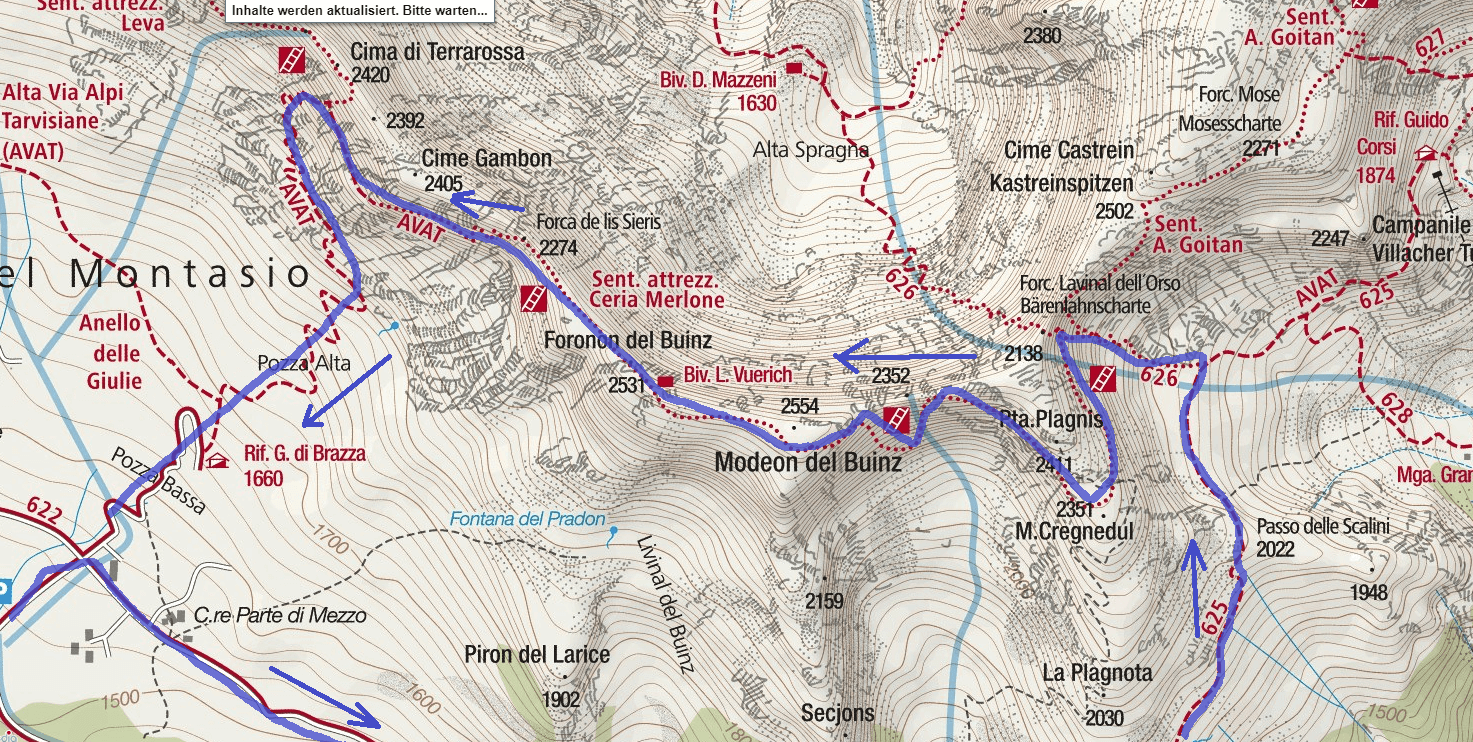 Images Aided path Ceria Merlone. The images included in the report were sent to us by the users of the site. If you are interested in sending us photos, use the form on the left or send them to our Facebook page.